Substituted Quinoxaline have received considerable attention during last two decades as they are endowed with variety of biological activities and have wide range of therapeutic properties. A literature survey indicates that quinoxaline derivatives possess different pharmacological and biological activities, of which the most potent is anti-inflammatory activity. In view of above literature survey, we thought to synthesize a novel substituted quinoxaline system.

INTRODUCTION: Quinoxaline is the subject of considerable interest from both academic and industrial Perceptive. Among the various classes of the nitrogen containing heterocyclic compounds Quinoxaline are important component of severally pharmacologically active compounds. Although rarely described in nature synthetic quinoxaline ring is a part of number of antibiotics which are known to inhibit the growth of Gram Positive bacteria and are also active against various transplantable tumors. Quinoxaline is commonly called as 1, 4-diazanaphthalene or benzopyrine. The approved numbering of the ring atom is shown below.

Quinoxaline is a low m.p. 29-30oC and is miscible with water. It is weakly basic (pka 0.56) and thus considerably weaker base than the isomeric diazonapthalenes namely cinnoline (pka 2.42), pthalizine (pka 3.47) or quinazoline (pka 1.95). 2-Hydroxy but not 2-amino quinoxaline exist in tautomeric forms.

Taylor 3 recently reported that 1-(p-tolysulfonyl)-2-phenyloxirane, obtained from the condensation of chloromethyl p-tolysulfone with benzaldehyde, on reaction with o-Phenylenediamine yields 2-phenyl quinoxaline in good yield.

A number of simple variations of the dialdehyde diamine reaction appear to work well. Thus replacement of the dialdehyde with α-halogenketone result in the formation of 2-substituted quinoxaline.2-phenylquinoxaline has been prepared in this manner from phenacyl chloride and o-phenylenediamine 4.

Compounds containing 1, 2, 3-tricarbonyl functionality have been used in the synthesis of a variety of Heterocyclic derivatives 5. The tricarbonyl group containing compounds can be prepared by treating 3-keto ester with p-nitro sulphonyl peroxide 6, to give 2-(p- nitro phenyl)-sulfonyl) oxy)-3-keto esters.

2-chloroquinoxaline has been prepared by the action of phosphorous oxychloride on quinoxaline -2-one or quinoxaline-1- oxide 7.

Oxidation of quinoxaline results in the formation of the product depending upon the nature of the oxidizing agent employed. With alkaline potassium permagnate pyrazine 2, 3-dicarboxylic acid is formed, while with peracid quinoxaline di-N-oxide results. 2-methylquinoxalineon selenium dioxide oxidation affords quinoxaline 2- carboxaldehyde.

Objectives: Most of the present diseases are due to the invasion by the pathogenic organisms like bacteria, fungal, virus, ricketsia. To treat these diseases many potent and broad spectrum antibiotics were discovered eg: Ampicillin, Amoxicillin, Carbenicillin, Ofloxacin, Tetracyclines, and Ciprofloxacin etc. Even though antibiotics are life saving drugs in therapeutics but they are potentially harmful. These effects include allergic and anaphylactic reaction, superinfection, development of resistance, destruction of normal non-pathogenic bacterial flora and selective toxicity like aplastic anemia, kidney damage etc.

A considerable amount of research activity is directed towards a potent, more specific and less toxic antibiotics. Substituted quinoxaline have received considerable attention during last two decades as they are endowed with variety of biological activities and have wide range of therapeutic properties. A literature survey indicates that a quinoxaline derivative possesses different pharmacological and biological activities, which of most potent activity is anti-microbial, anti-fungal, anti-inflammatory and analgesic activity. We thought to synthesize novel substituted quinoxaline moiety.

Quinoxaline derivatives are widely distributed in nature and they have been shown to have very interesting biological activities like, anti-bacterial, anti-fungal, anti-inflammatory and analgesic activity. Hence in present study we plan to synthesize novel substituted quinoxaline derivatives.

Isoniazid is an antitubercular agent used for the treatment of tuberculosis. It is a first line drug and is used along with the rifampicin and ethambutol.

By considering the above facts here with we have planned to synthesize substituted quinoxaline derivatives by incorporating the isoniazid moiety into the quinoxaline moiety and evaluate them for biological activities like anti-bacterial potency and anti-inflammatory activity.

Preparation of -2, 3-dihydroxy Quinoxaline (Ia): In to a clean dry round bottom flask introduced o-phenylene diamine (10.7 gms, 0.1 mole) and diethyl oxalate (14.6 ml, 0.1 mole) and the contents were refluxed for 1hr. Cooled and the separated solid was collected by filtration, washed with 25 ml ether and dried. The obtained 2, 3-dihydroxy quinoxaline was recrystallized from DMF, the yield was 90% and the melting point was 360°C (Ia).

Preparation of -2, 3- dichloro Quinoxaline (IIa): In a clean dry round bottom flask introduced 2, 3-dihydroxy quinoxaline (1.67 gms, 0.01 mole), phosphorous oxy chloride (6.25 ml, 0.01mole) and DMF (1ml). The contents of the flask were refluxed for 90 min. The resulting solution was cooled for 4-5 hr, and then the cold solution was poured into crushed ice with gentle stirring with the glass rod. The solid thus separated was collected by filtration, washed with 25 ml of water and dried.

The obtained 2, 3-dichloro quinoxaline was recrystallized from solution of chloroform and n-hexane (1:1), the yield was 85% and the melting point was 152°C (IIa).

Preparation of 3-chloro-2-hydrazino quinoxaline (IIIa): In a clean dry round bottom flask introduced 2, 3-dichloro quinoxaline (1.60 gms, 0.01mole), hydrazine hydrate (1ml 0.01mole), methanol (25ml) and all the contents of the flask were refluxed for 20 min at refluxing temperature. Cooled and separated solid was collected by filtration, washed with 25 ml water and dried. The obtained 3-chloro-2-hydrazino quinoxaline was recrystallized from methanol, the yield was 75% and the melting point was 182°C. (IIIa)

Preparation of 3-chloro-2-(p-methoxybenzylidene hydrazinyl )-quinoxaline(IVa1): In to a clean dry round bottom flask introduced 3-chloro-2-hydrazino quinoxaline (IIIa) (1.95 gms, 0.01 mole), 4-methoxybenzaldehyde (1.20 ml, 0.01 mole) and glacial acetic acid (15 ml) and the contents were refluxed for 2 hr. Cooled and the solution was poured into ice cold water with continuous stirring. The solid thus separated was collected by filtration and washed with 25 ml water and dried. The obtained 3-chloro-2-(p-methoxybenzylidene hydrazinyl)-quinoxaline was recrystallized by using ethanol (90%), the yield was 71% and the melting point was 130-132 °C (IVa1). The other Schiff’s bases were prepared by using same procedure as above (IVa2-IVa10). The physical characterization data was given in the Table-I

Procedure: In a clean dry round bottom flask introduced 3- chloro- 2- (p- methoxybenzylidene hydrazinyl) - quinoxaline (IVa1) (3.12 gms, 0.01 mole), isoniazide (1.37 gms, 0.01 mole) and pyridine (25ml). The above contents of the RB flask were refluxed for 24 hr. Cooled and the solution was poured into ice cold water with continuous stirring. Then the solid thus separated was collected by filtration and washed with 25 ml water and dried. The obtained N-(3-(isoniazidyl)-N'-(2-(2'-(p-methoxy benzylidene hydrazinyl))-quinoxaline was recrystallized by using aqueous DMF, the yield was 60% and the melting point was 140-142°C (Va1).The other compounds of the series were prepared by using same ocedure as above (Va2-Va10). The physical characterization data was given in the Table-II 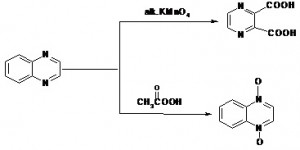 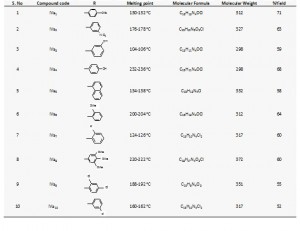 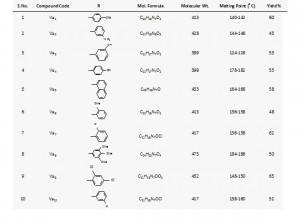 The above results establish the fact that substituted quinoxaline can be studied further to search for new anti-inflammatory compounds.