INTRODUCTION: Medicinal plants provide good remedies for human diseases and play a vital role in our day to day life. Indian systems of medicines are all based on the knowledge of drugs from plants. Inflammation is the response of living tissues to injury and it involves complex array of enzyme activation, mediator release and extravagations of fluid cell breakdown and repair. The non-steroidal anti-inflammatory drugs (NSAIDs) and opiates are currently available in the market are not useful in all cases because of their unwanted side effects.

Hence, search for other alternatives seems essential. Tecoma stans, an erect shrub or small tree comes from desert shrub-lands and dry forests in the region from Texas and Arizona southward to Argentina. It has become established in many parts of the Pacific and is naturalizing in South Florida. It is naturalized in most parts of India, planted in gardens in the plains throughout India and in the hills, up to an altitude of 1,500 m 1. The plant contains triterpenes, hydrocarbons, resins and a volatile oil.

Plant Materials: The stem bark of Tecoma stans (L.) Jussex. Kunth was collected from Thiruvalla, Kerala, India and authenticated by Dr. Joby Paul, Botanist, Environmental Sciences, M. G University, Kottayam (voucher specimen no: 895/SES/MGU).Voucher specimen was deposited in the Department of Pharmacognosy of our institution for future reference. The collected stem bark was dried in shade and used for the study. Stem bark was powdered and exhaustively extracted with ethanol in a Soxhlet extractor. The extract was concentrated to a solid residue and the yield was calculated. The total ethanolic extract was fractionated using the solvents in the order of increasing polarity like petroleum ether, benzene, chloroform and ethyl acetate. The marc obtained after total ethanolic extraction of the stem bark was subjected to aqueous extraction by reflux method. The extracts were concentrated to a solid residue and the yield was calculated.

Preliminary Phytochemical Study: All the extracts were subjected to determine the presence of chemical constituents by qualitative chemical tests.

In-vitro Anti-Inflammatory Activity by Human Red Blood Cell Membrane Stabilization: 21 Blood was collected from healthy human volunteer who was not taken any NSAIDS for 2 weeks prior to the experiment and mixed with equal volume of sterilized Alsever solution. The blood was centrifuged at 3000 rpm and packed cells were washed with isosaline and a 10% (v/v) suspension was made with isosaline (HRBC suspension). Extracts were prepared in distilled water and to each concentration 1 ml phosphate buffer, 2 ml hyposaline and 0.5 ml HRBC suspension were added. These were incubated at 37 ºC for 30 min and centrifuged at 3000 rpm for 20 min.

The hemoglobin content in the supernatant solution was estimated spectrophotometrically at 560 nm. Diclofenac (100 mcg/ml) was used as the reference standard and a control was prepared. The percentage of HRBC membrane stabilization or protection was calculated using the formula.

Selection of Animals: The animals were housed in ventilated cages and fed with pellted diet and water ad libitum and maintained at 37 ºC and 12/12 h light/dark cycle. Albino wistar rats (200-250 g) were housed in standard environmental conditions. Female Albino wistar rats were used for acute toxicity study in accordance with OECD guidelines 423. Male wistar rats were used for carrageenan induced rat paw edema model. The experiments were carried out after obtaining approval from the Institutional Animal Ethical Committee of our institution (no. IAEC/MGU/CHE-M.Pharm/012/ 2009dtd 21-12-2009).

Vc - the inflammatory increase in paw volume in control animals and Vt in drug treated animals.

Paw oedema was induced by injecting 0.1 ml of 1% carrageenan in physiological saline into sub plantar tissues of hind paw of each rat. Ethyl acetate and alcoholic extracts were administered orally 30 min prior to carrageenan administration. The paw volume was measured at intervals of 60, 120, 180, 240 min by the mercury displacement method using a plethysmograph. The percentage inhibition of paw volume in drug treated group was compared with the carrageenan control group.

Statistical Analysis: Data obtained were expressed as mean ± S.D. of 6 animals in each group. Difference between the control and the treatments were tested for significance using ANOVA followed by Dunnet’s t-test. Data were considered significant when p values were lower than 0.05.

Quantification of Gallic Acid in Ethyl Acetate Extract of Tecoma stans (L.) Juss. Ex Kunth: The Co-TLC studies were conducted by using various solvent systems, with the ethyl acetate extract and gallic acid, standard. The solvent system toluene: ethyl acetate: formic acid (6:4:0.8), gave the identification of gallic acid, in the extract. Based on the Rf value obtained by TLC analysis of the ethyl acetate fraction, HPTLC of the same fraction was carried out to estimate the amount of gallic acid in the same fraction. CAMAG HPTLC system was used. Gallic acid at a concentration 0.1mg/ml was prepared and used as stock solution. From the standard stock solution 2, 4, 6, 8, 10 μL, corresponding to 200, 400, 600, 800, 1000ng/ml respectively was spotted on pre-coated silica gel plates in the HPTLC system and a calibration curve was obtained. The ethyl acetate extract was taken at 1mg/ml concentration and 20, 30 μL were applied on the same TLC plates.  The plates were dried and developed in twin trough chamber using the solvent system, toluene: ethyl acetate: formic acid (6:4:0.8). After development, the plates were further dried and observed under UV at 280 nm 24. The calibration curve of gallic acid and chromatogram of standard and sample were obtained. From the calibration curve the amount of Gallic acid in the sample was determined. 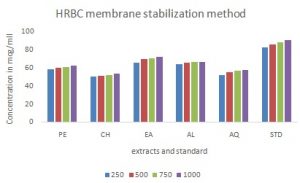 Among all the extracts, ethyl acetate and alcoholic extracts showed significant in-vitro anti-inflammatory activity in a concentration dependent manner. Ethyl acetate extract at a concentration of 1000 mcg/ml showed 57.15% protection and alcoholic extract at a concentration of 1000 mcg/ml showed 48.98% protection of HRBC in hypotonic solution. All the results were compared with standard diclofenac which showed 71.43% protection. The lysosomal enzymes released during inflammation produced a variety of disorders. The extra cellular activity of these enzymes is said to be related to acute or chronic inflammation. The NSAIDs act either by inhibiting these lysosomal enzymes or by stabilizing the lysosomal membrane.

Since, HRBC is similar to lysosomal membrane components, the prevention of hypotonicity induced HRBC membrane lysis is taken as a measure of anti-inflammatory activity of the drugs. Hypotonicity-induced haemolysis may arise from shrinkage of the cells due to osmotic loss of intracellular electrolyte and fluid components 21. The extract may inhibit the processes which may stimulate or enhance the efflux of these intracellular components.

Values are Mean ± SD of 6 animals in each group. Comparisons were made between Group 1 vs. 2, 3, 4, 5 and 6. P-values *P<0.05, *P<0.01. Percentage protection given on Parenthesis. Difference between the control and the treatments were tested for significance using ANOVA followed by Dunnet’s t-test. Gr. I-control, Gr. II & III- Ethyl acetate fraction, Gr-IV & V- Total alcoholic extract.

Carrageenan induced rat paw edema is a suitable animal model for evaluating anti-odematous effect of natural products 25. The ethyl acetate fraction at the dose of 400 mg/kg showed high significant activity at 4 h, where it caused 70.6% oedema inhibition and alcoholic extract at the  dose of 400mg/kg  caused 60.3%  inhibition as  compared to that of 79.3% oedema inhibition caused by 10mg/kg of diclofenac sodium. This acute inflammation model is a biphasic event. The early phases of (1-2 h) the carrageenan model is mainly mediated by histamine, serotonin and increased synthesis of prostaglandins in the damaged tissue surroundings. The late phase is sustained by prostaglandin release and mediated by bradykinin, leukotrienes, polymorphonuclear cells and prostaglandins produced by tissue macrophages 26.

Significantly high anti-inflammatory activity of ethyl acetate extract and alcoholic extract of Tecoma stans (L.) may be due to inhibition of the mediators of inflammation such as histamine, serotonin and prostaglandin.

In the present study, the anti-inflammatory activity of the ethyl acetate and alcoholic extracts of Tecoma stans (L.) stem bark has been established. However, further phytochemical studies can be done for the isolation of compound(s) from the active fraction to examine the underlying mechanism of these activities.

ACKNOWLEDGEMENT: The authors are thankful to ITL Labs Ltd., Bangalore for providing the necessary facilities of the study.