ABSTRACT: Caesalpinia mimosoides Lamk. is a prickly climbing shrub belongs to Leguminosae family. various parts of this plant have been used in the treatment of ulcer, inflammation, wound healing  and arthritis. The present study aimed at the evaluation of anti inflammatory property of different extracts of aerial parts by in vitro and in vivo methods. In vitro methods were estimated by protein denaturation and proteinase inhibition method. An in vivo method was estimated on the carragenan paw edema. Acute toxicity studies were performed as per OECD-423 guidelines. Toxicity signs and symptoms were not observed. Both methods showed significant anti-inflammatory activity of the different extracts tested

INTRODUCTION: Inflammation is a sequential process induced by several biological stimuli such as ischemia, thermal or physical injury, infectious agents and antigen- antibody interactions  leads to release of allergic mediators, which causes injury 1. It is the defense mechanism of the body processed to get rid of the injurious stimuli and induce the tissue healing process.

Caesalpinia mimosoides Lam is a member of Leguminosae family. A prickly climbing shrub, with branches bearing small prickles is mainly distributed in the south of China and grows in countries like India, Myanmar, as well as in northern and north-eastern parts of Thailand 3. Young sprouts and leaves are edible and sour and are traditionally used as a carminative and a remedy for dizziness 4. The methanolic extract of C. mimosoides shoot tips was reported to exhibit antioxidant activity. Moreover, the aqueous and the ethanol extracts contained gallic acid, the antioxidative compound. This plant showed moderate antioxidant activity, and high tannin and total phenolics contents, which led us to examine it further for other biological activity 4. The present study was designed to investigate the anti inflammatory activity of aerial part extract of Caesalpinia mimosoides by in vitro and in vivo model.

Plant Materials: Aerial parts of Caesalpinia mimosoides, was collected from Kottayam district, Kerala during the month of March 2013 and was identified and authenticated by the botanist, Mr. Rogimon P. Thomas, Department of Botany, C.M.S. College, Kottayam, Kerala. A voucher specimen (No. 265) was preserved at C.M.S. College, Kottayam.

Shade dried and powdered aerial parts (100g) of Caesalpinia mimosoides was soaked in rectified spirit in a round bottom flask. After soaking it for one day, it was refluxed with ethanol 95% (2 Litre) for 3 hours and the clear solution was decanted off. The extraction was repeated thrice. The combined extract was concentrated to a semisolid consistency. Thus total ethanolic extract was obtained. The fractionation of the ethanolic extract was carried out using solvents in the increasing order of polarity i.e. petroleum ether(PEE), chloroform(CHE) & ethyl acetate(EAE). Each fraction was concentrated, weighed and stored for further studies.

Adult Wister albino rats (150g -200 g) of either sex were used for the in vivo evaluation. They were housed under standard laboratory conditions and were fed with standard animal feed and water ad libitum. The experimental protocol was approved by institutional animal ethical committee.

Acute toxicity study was performed as per OECD guidelines 423. (Acute toxicity class method-The IAEC approval No. is 024/MPH/UCP/CVR/13). 3 female Wistar albino rats were used for the study. The extract was administered orally at the dose of 2000 mg/kg and observed at half an hour intervals for 4 hr, then after 24 hr. There were no mortality and no signs of toxicity.

All the above solutions were adjusted to pH 6.3 using 1N HCl. The samples were incubated at 37°c for 20minutes and the temperature was increased to keep the samples at 57°c for 3minutes. After cooling, add 2.5 ml of phosphate buffer to the above solutions. The absorbance was measured using UV-Visible spectrophotometer at 660nm 5, 6. The experiments were performed in triplicate. The r+++++++++++esults were tabulated.

The reaction mixture (2ml) was containing 0.06mg trypsin, 1ml of 25mM Tris HCl buffer (pH7.4) and 1ml test sample of different concentrations of different solvents. The reaction mixture was incubated at 37⁰C for 5min and then 1ml of 0.8% (w/v) casein was added. The mixture was incubated for an additional 20min, 2ml of 70% perchloric acid was added to terminate the reaction. Cloudy suspension was centrifuged and the absorbance of the supernatant was read at 280nm against buffer as blank 5. The experiment was performed in triplicate. The percentage of inhibition of proteinase inhibitory activity was calculated. The experiments were performed in triplicate. The results were tabulated.

The animals were divided into four groups of six animals each, so a total of 24 animals were used and divided according to the following manner:

Paw oedema was induced on each rat by injecting 1 mL of carrageenan on physiological saline to the right hind paw. The ethanolic extract at different concentrations (200 and 400µg/ml) were administered orally 30 minutes prior to carrageenan administration. Paw volumes were measured immediately after injection and then at 60, 120, 180 minutes by mercury displacement method using plethysmograph. The percentage inhibition of paw volume in extract treated groups was compared with control 7.

Statistical analysis was done using one way analysis of variance followed by Dunnets test. p values greater than 0.05 were considered as significant.

The extracts of C.mimosoides did not show any sign of toxicity up to 2000 mg/kg body weight and hence it was considered to be safe.

The production of auto antigen in certain arthritic disease may be due to denaturation of protein, membrane lysis and proteinase action. Different concentrations (50,100,200,250µg/ml) of C. mimosoides showed significant anti-inflammatory activity against protein denaturation and proteinase enzyme. The ethyl acetate extract of the Caesalpinia mimosoides showed higher inhibition when compared with the other extracts.

The anti inflammatory activity of total ethanolic extract was studied on carrageenan induced rat paw oedema model in wistar albino rats by using plethysmograph. The ethanolic extracts of Caesalpinia mimosoides at the doses of 200 and 400 mg/kg significantly reduced the carrageenan induced edema. The maximum percentage inhibition of extract and Diclofenac sodium were noticed at the 3rd hr of carrageenan administration. Extract and Diclofenac sodium showed significant inhibition of 51.39% and 73.74% at doses of 400mg/kg and 75mg/kg respectively. The measurement of paw volume and the percentage inhibition of inflammation were calculated and tabulated in Table 3. 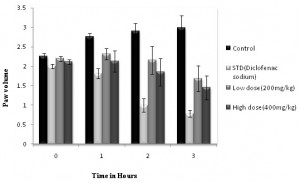 DISSCUSSION: Denaturation of proteins is a well documented cause of inflammation. As a part of the investigation on the mechanism of the anti‐inflammatory activity, ability of extract to inhibit protein denaturation was studied. It was effective in inhibiting heat induced albumin denaturation at different concentrations as shown in Table 1. The IC50 value of the standard diclofenac sodium was found to be 70.75μg/ml and it was comparable with the IC50 value of EAE (IC50 75.04μg/ml). The ethyl acetate extract of the Caesalpinia mimosoides showed higher inhibition of protein denaturation when compared with the other extracts.

Neutrophils are known to be rich source of serine proteinase and are localized at lysosomes. It was previously reported that leukocytes proteinase play an important role in the development of tissue damage during inflammatory reactions and significant level of protection was provided by proteinase inhibitors. So by inhibiting the proteinase enzyme, the tissue damage as well as release of inflammatory mediators can be blocked. In the proteinase inhibitory activity screening the ethyl acetate fraction showed higher inhibitory activity when compared with other extracts (Table 2). The ethyl acetate fraction showed an IC50 value of 95.21μg/ml which was comparable with the IC50 value of the standard diclofenac (68.72μg/ml) for the inhibition.

The local acute inflammation model used in this study induced a biphasic oedema consisting on an early phase followed by a more sustained late phase. The early phase of carrageenan oedema was related to the production of immediate inflammation mediators such as histamine, serotonin and bradykinin in the inflamed tissue. The late phase was related to neutrophil infiltration and production of reactive species such as hydrogen peroxide, superoxide radical, peroxinitrite and pro-inflammatory prostanoids. The second phase is sensitive to most clinically effective anti-inflammatory agents. The anti-inflammatory activity exerted by TEE of Caesalpinia mimosoides suggests that the effect may be due to the inhibition of prostaglandin, kinin, bradykinin and lysozyme synthesis.

The total ethanolic extract of Caesalpinia mimosoides possesses varying degree of anti inflammatory activity when tested at two different doses (Table 3). The total etanolic extract of Caesalpinia mimosoides at the dose of 400 mg/kg showed high significant anti inflammatory activity at the 3rd hour of administration, where it caused 51.39% inhibition, as compared to that of 75 mg/kg of standard diclofenac (73.61%).

ACKNOWLEDGEMENTS: We thank University college of Pharmacy, cheruvandoor campus, M.G. University, Kottayam for providing all the facilities to conduct this work.