INTRODUCTION: Inflammation is an important process in the body’s defence system. It acts to remove and repair damaged tissue or neutralize harmful agents. The cascade includes; elevated permeability in micro-vessels, attachment of circulating cells to the blood vessels in the vicinity of injury site, migration of several cell types, growth of new tissue and blood vessels. Inflammation may release or generate a diverse population of pro-inflammatory mediators like bradykinins, serotonin, histamines, prostaglandins and nitric oxide.

Inflammation is one of the major condition associated with various diseases 1. Drugs used for the management of pain and inflammation are either narcotics (e.g.Opiods) or non-narcotics(e.g. Salicylates, corticosteroids). All these drugs are well known for side effects such as intestinal tract ulcers and erosions of the stomach linings 2. As a result, the interest has been focused on finding out safer and potent anti-inflammatory drug. The natural products today represent safety in contrast to the synthetic drugs that are regarded as unsafe to humans and environment. So, people are returning to the natural products with the hope of safety and security 3. Hence the present study focuses on evaluating the anti-inflammatory activity of trans-cinnamaldehyde and piperine combination. Trans-cinnamaldehyde has been reported to,

Whereas, piperine has been reported to,

Thus, the advent of trans-cinnamaldehyde and piperine with anti-inflammatory action would be unique and highly beneficial to treat signs of acute and sub-acute inflammation in carrageenan induced paw edema 12.

Male Sprague-Dawley rats of weight 150-200 grams and of 3-4 months of age were used for research purpose. Animals were housed under standard laboratory conditions at 25 ± 2°C with 12h light and 12h dark cycle in groups of three with access to standard pellet diet and water ad libitum under strict hygienic conditions. They were acclimatized to the laboratory conditions for a period of 6 days before the study. The study was carried out in the Department of Pharmacology after approval of the protocol by the Institutional Animal Ethics Committee.

This invivo model tested the ability of anti-inflammatory drugs to inhibit the edema produced in the hind paw of the rat after injection of a phlogistic agent 13. Phlogistic agent(irritant) used was sulfated polysaccharides like carrageenan 14. The volume of the injected paw was measured before and after application of the irritant and the paw volume of the treated animals is compared to the control animals 15.

Male Sprague-Dawley rats with a body weight between 150 and 200 g were used. The animals were starved overnight. Five groups of male rats were used during the study. Group I (Control) received the vehicle (distilled water-2ml/kg), group II (Standard) received standard drug indomethacin (3mg/kg), group III received piperine (15mg/kg), group IV received trans-cinnamaldehyde (5mg/kg) and group V received [Piperine (8mg/kg) + Trans-cinnamaldehyde (3mg/kg)] combination 16. Thirty minutes later, the rats were challenged by a subcutaneous injection of 0.05 ml of 1% solution of carrageenan into the plantar side of the left hind paw. The paw was marked with ink at the level of the lateral malleolus and immersed in mercury up to that mark. The paw volume was measured plethysmographically immediately after injection, 0mins, then after 60mins, 120mins, 180 mins and 4th hour.

The inflammation was measured in terms of ml i.e. replacement of water by edematous paw in plethysmometer immediately after carrageenan injection(0 mins) and then 1st, 2nd, 3rd and 4th hour after carrageenan injection. The percent inhibition of edema was calculated for each group with respect to its vehicle control (Group I). The anti-inflammatory activity was calculated using relation {(Vc-Vt/Vc )X 100} , where Vc and Vt denote mean increase in paw volume of control and treatment animals respectively. Effectively treated animals show much less edema 17.

Statistical Analysis: Values for anti-inflammatory activity are expressed as "Mean increase in paw volume ± SEM". Significance of difference between means is determined by One-way ANOVA followed by Dunett's multiple comparisons test where values of P<0.05 are considered significant. 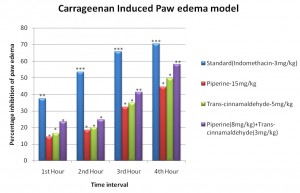 FIG.1: GRAPH OF TIME INTERVAL VS. PERCENTAGE INHIBITION FOR ANTI-INFLAMMATORY ACTIVITY OF TRANS-CINNAMALDEHYDE AND PIPERINE COMBINATION.

The anti-inflammatory activity was compared for standard drug indomethacin (3mg/kg), trans-cinnamaldehyde (5mg/kg), piperine (15mg/kg), and {trans-cinnamaldehyde (3mg/kg) and piperine (8mg/kg)} combination with control Group I. From the results it can be observed that the treatment groups (Group II-Group V) showed significant anti-inflammatory activity from 1st hour by decreasing paw volume as compared with the control group (Group I). The {trans-cinnamaldehyde and piperine} combination decreased the edema significantly (**P<0.01) at 3rd and 4th hour after administration. When compared to the control group(Group I), the anti-inflammatory effect of the combination treatment was almost comparable with standard drug indomethacin(Group II) at  4th hour after administration.

DISCUSSION: In the current investigation, the phytoconstituents trans-cinnamaldehyde and piperine were evaluated in combination as anti-inflammatory agents for its activity by In Vivo (Carrageenan induced paw edema) method. This method measures the ability of a compound to reduce edema volume induced in the rat paw after injection of phlogistic agent. Carrageenan induced paw edema model has been commonly used as an experimental model for acute and sub-acute inflammation and is believed to be biphasic. The early phase (1st - 2nd hour) of paw edema model is mediated by histamine, serotonin and increased synthesis of prostaglandins at the injured tissue site. The late phase(2nd  - 4th hour) is uninterrupted by prostaglandin release and mediated by bradykinin, polymorphonuclear cells, leukotrienes and prostaglandins produced tissue macrophages.

CONCLUSION: The research done supports the use of phytoconstituents - piperine and trans-cinnamaldehyde in combination for their anti-inflammatory action. However, studies on biological mechanisms and bioavailability are needed to fully evaluate their role in human health.

ACKNOWLEDGEMENT: It is my privilege to express my grateful acknowledgement to Dr. Munira Momin, Principal In-Charge, for providing me all the necessary facilities required during the entire course of my research work. And, I am thankful to my guide Dr. Kedar Prabhavalkar, for his help, support and invaluable suggestions during my entire research study.