ABSTRACT: Background: Raktachandan / Pterocarpus santalinus is mentioned to have edema reducing property in Ayurvedic literature. Studies have been performed using its methanolic extract for anti-inflammatory, analgesic and antioxidant activities. Since, Ayurveda advises to use it as a decoction, we planned to study the acute anti-inflammatory activity of decoction prepared from Pterocarpus santalinus bark-wood powder. Methodology: Albino rats of either sex were divided into 4 groups of 6 rats each (Group I – Control (CMC-vehicle), Group II – Ibuprofen suspension, Group III – P. santalinus suspension 3.5 mg/kg, Group IV – P. santalinus suspension 7 mg/kg. All the experimental animals were given standard and test drugs orally, 45 min before inducing inflammation. Acute inflammation was induced by injecting 0.1ml of 1% carrageenan solution in sub-plantar tissue of left hind paw of the rats. Paw volume (Plethysmometer) and pain assessment (Randall and Selitto paw withdrawal method) were done at 0 h (before medication), then at 1 h, 2 h, 3 h and 4 h after induction of inflammation. Data was analysed using Graph Pad Prism version 5. ANOVA followed by Tukey’s test was used for comparison among groups. Results: P. santalinus suspension 7 mg/kg and ibuprofen treated rats showed significant reduction (p<0.05) in their paw volume compared to the other groups. There was significant reduction in pain threshold (gm/sec) in all the groups (p<0.05) but in P. santalinus 7  mg/kg  and Ibuprofen treated groups the pain threshold gradually  increased after 2 h of induction of inflammation. Conclusion: Orally given decoction of Pterocarpus santalinus bark-wood powder in 7 mg/kg dose showed significant anti-inflammatory and analgesic activity in carrageenan induced inflammatory model in rats.

INTRODUCTION: Inflammation is a localized protective response elicited by injury or destruction of tissues, which serves to destroy, dilute or wall off, both the injurious agent and the injurious tissue.

Acute inflammation is characterised by sudden onset and marked by classical signs of heat, redness, swelling, pain and loss of function and in which vascular and exudative processes predominate.

Pterocarpus santalinus, also known as Red Sandalwood (English) and Raktachandan (Sanskrit), has a natural dye i.e. santalin, which is used as colouring agent in pharmaceutical preparations and foodstuffs. In the traditional system of medicine, the decoction from the wood is attributed various medicinal properties. It is known to have anti-hyperglycaemic activity, anti-pyretic, anti-inflammatory activities and also used as a cooling agent 1. Hepatoprotective 2 and gastro-protective 3 properties of this natural medicine have also been proven.

MATERIAL AND METHODS: This study was conducted at the Department of Pharmacology, Bharati Vidyapeeth (Deemed to be University) Medical College, Pune, after getting approval from the Institutional Animal Ethics Committee (BVDUMC/2229/2017/ 001/002), according to the guidelines of the committee for the purpose of control and supervision of experiments on animals (CPCSEA).

Pterocarpus santalinus bark wood was purchased from the Ayurvedic medical store - Vaidya Khadiwale, and was authenticated at the Agharkar Research Institute, Pune by plant drug authentication service, botany group, plant sciences division (Voucher no. 55749), as authentication certificate Auth.15-072. The bark wood was dried, powdered and a decoction was prepared - where one part of the powder was added to 16 parts of distilled water and boiled till the solution reduced to half 7. As per Ayurvedic literature, the human dose for P. santalinus is 80 ml (dwi-pala) per day of the decoction 8. Two doses of the decoction were studied for the anti-inflammatory activity - 3.5 ml/kg and 7 ml/kg body weight of rat, after extrapolation from the human dose. These two doses were made into individual suspensions using 1% carboxy methyl cellulose as the decoctions were thick in consistency and difficult for oral administration in rats.

Ibuprofen was purchased from the market in suspension form and administered at a dose of 100 mg/kg body weight orally to the rats 9.

Experimental Animals: 24 Albino rats of either sex, weighing 150 - 200 g each, were used for this study. These animals were housed in separate cages, fed with rat food pellets and water ad libitum, and cared for, as per CPCSEA guidelines. Animals were divided into four (4) groups having six (6) rats in each group, as follows:

The standard and the test drugs were given orally to the rats. 45 min after administration of the drugs, acute inflammation was induced in these animals by injecting 0.1ml 1% carrageenan solution in the sub-plantar tissue of left hind paw of the rats 10.

Paw volume was measured hourly using a plethysmometer 11, where the inflammation induced paw of the animal was submerged in the water reservoir of the instrument, and the volume of water displaced was taken as the volume of the paw (measured in ml). This measurement was done at baseline (0 h) and repeated at 1 h, 2 h, 3 h and 4 h for all the animals in all the groups.

For assessment of pain, threshold for nociception was measured using the Randall and Selitto 12 paw withdrawal method, where a gradually increasing amount of pressure was applied on the inflammation induced paw using an Ugo Basile Analgesy Meter. This measurement was done at baseline (0 h) and repeated at 1 h, 2 h, 3 h and 4 h for all the animals in all the groups. The pressure at which the animals withdrew their paws or squeaked was taken as the pain threshold of the rat (measured in grams per second).

TABLE 1: CHANGE IN PAW VOLUME OF THE STUDY GROUP ANIMALS (IN ml) 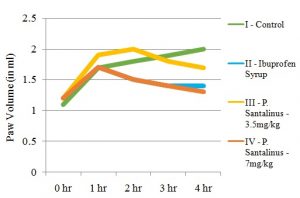 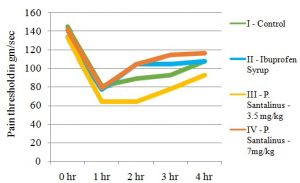 TABLE 2: PAIN THRESHOLD OF THE STUDY GROUP ANIMALS (IN gm/sec)

DISCUSSION: Carrageenan induced local edema is a widely used model for neutrophil mediated acute inflammatory response. Earlier studies have shown that the cardinal signs of inflammation such as local swelling, erythema, hyperthermia and pain develop immediately following subcutaneous injection of carrageenan 13. In this study too, paw volume was increased in all the animals within an hour of injection with carrageenan, denoting an acute localised inflammatory response. Ibuprofen is a non-steroidal anti-inflammatory drugs (NSAIDs) available for administration in various forms and is commonly used for acute and chronic, painful inflammatory conditions. In this study, we used  a  syrup preparation  of  ibuprofen  as  the standard drug for oral administration in rats. In this study, two oral doses of the P. santalinus decoction were assessed for their anti-inflammatory and analgesic activity, according to Ayurvedic literature. In previous studies, researchers have proven the anti-inflammatory and analgesic activity of P. santalinus, by using an alcoholic extract prepared from the bark wood powder 4. We too assessed the same activity, but, using a decoction (kadha) prepared from the bark wood powder of P. santalinus, so as to mimic the clinical practices of Ayurveda.

Our study revealed that P. santalinus in the dose of 7 mg/kg, which was extrapolated from the human dose, showed significant reduction in inflammation as compared to the control group animals Table 1, Fig. 1. This anti-inflammatory effect seen with the study drug in the dose of 7 mg/kg was comparable to that seen with the standard drug ibuprofen. In the lower dose of 3.5 mg/kg, P. santalinus could show significant reduction in inflammation only at the end of the experiment i.e. at 4 h after induction of inflammation. This reduction in paw volume was quite less as compared to that seen in P. santalinus 7 mg/kg and ibuprofen group. Our observation regarding the effective anti-inflammatory dose of P. santalinus is at par with the one which is documented in Ayurvedic literature.

For studying the analgesic activity of the study drug P. santalinus, we observed the pain threshold in all the study groups (for 4 h) by the Randall & Selitto paw withdrawal method after induction of inflammation. Similar results were obtained as seen for the anti-inflammatory effect, that P. santalinus 7 mg/kg and ibuprofen group showed parallel efficacy in analgesic activity as compared to the control group which was statistically significant Table 2, Fig. 2. With the 3.5 mg/kg dose of P. santalinus, the pain threshold remained lower than all the other groups including the control group till the end of the experiment, depicting its inability to provide analgesia in this dose.

Ianaro has shown that intraplantar injection of carrageenan in mice produces tumor necrosis factor - α (TNF-α), interferon-γ andcytokines like interleukin-1 and 2, which induce nitric oxide synthase (NOS) in various cells. This inducible NOS along with the carrageenan induced cyclo-oxygenase contribute to the inflammatory response. Cho et al., had isolated two lignans from P. santalinus to study their biological properties and mechanism of action. Their study demonstrated that savinin, one of the lignan from P. santalinus inhibited TNF-α production and T cell proliferation and they suggested that this may act as the active principle for anti-inflammatory effect of the heartwood of P. santalinus.

Thus, our study demonstrates anti-inflammatory and analgesic activity of oral decoction of P. santalinus in the dose of 7 mg/kg in carrageenan induced acute inflammation. These activities of P. santalinus have been seen to be comparable to Ibuprofen which belongs to the preferred class of anti-inflammatory drugs, NSAIDs. Orally used NSAIDs are associated with a common adverse effect of gastric irritation. P. santalinus provides an added advantage over NSAIDs in this respect as it has been proven to be gastroprotective 3 in previous studies.

ACKNOWLEDGEMENT: The authors would like to acknowledge our institute for providing the necessary facilities for conducting this study and the Central Animal House staff for taking care of our experimental animals.