Objective: To explore the Anti-inflammatory activity of aqueous extract of Areca catechu L in carrageenan, dextran and formalin induced inflammation models in Swiss albino mice, by injection into the interdigital area, through the subplantar region of the paw. To explore the antioxidant effects of Arecanut extract on the in-vitro system.

Method: Treatment with aqueous extract at 250 mg/kg.bwt and 500 mg/kg.body weight and untreated group was started orally 1 hour prior to the subplantar injection of carrageenan. The paw volume was measured using vernier calipers, before and one hour after carrageenan injection. Similarly in the case of dextran, initial readings were taken on the first day, prior to Formalin administration. Day one readings were taken one hour post formalin administration. This was taken during seven consecutive days challenge period. The drug aqueous arecanut extract at 200mg/kg.bwt, 500 mg/kg.bwt produced reduction in inflammation of the paw produced due to carrageenan, formalin and dextran. In-vitro antioxidant studies showed that aqueous arecanut extract could inhibit superoxide radical production, could inhibit hydroxyl radicals, and could prevent lipid peroxidation. Arecanut extract could scavenge DPPH radicals and also ABTS. In FRAP assay, the reduction of ferric to ferrous is also seen in a concentration dependant manner.

Results: The present investigation provides proof for the effectiveness of treatment as an anti-inflammatory and antioxidant agent. Compared with the control group, the arecanut treated group showed free radical scavenging ability. Compared with the control group, the treatment of mice with Arecanut extract showed reduction in paw oedema in a dose dependent manner at 200 mg/kg.bwt and 500 mg/kg.bwt.

Discussion and Conclusion: Arecanut extract has some protective effects against peroxidative damage. It has anti inflammatory activity, thus it carries a great potential as a health product.

INTRODUCTION:Arecanut has main constituents like polyphenols, fat polysaccharides, fiber and protein. Besides these, nuts contain alkaloids, arecoline (0. 1-0. 7%) and others in trace amounts such as arecadine, guvacoline and guvacine. The polyphenols of ripe Areca catechu L., contain predominantly polymers like leucocyanidins as well as small amounts of catechin, leucopelargonidin and leucocyanidin. The polyphenolic substances of arecanut, termed tannins are responsible for the physiological action.

Free radicals and other reactive species generated by processes, such as ionizing radiation, toxic xenobiotics, inflammation and metabolites of membrane lipid transformation have been implicated in many human diseases 1. They damage lipids, proteins and deoxyribonucleic acids with consequent effects ranging from cell death to neoplasia 2. Reactive Oxygen Species (ROS) are biologically important, damaging molecules such as lipids, DNA or proteins and are involved in the pathogenesis of degenerative diseases 3.

Organism possess several antioxidant systems, enzymatic and non enzymatic, that are very important for the prevention of oxidative stress 4. Given the multiplicity of antioxidant pathways, their centrality in the prevalence of oxidant stress and the influences of lifestyle and nutritional supplements on an individual’s antioxidant capacity, it is important to be able to quantitatively measure the total antioxidant or antioxidant power within herbal or plant extracts 5. Removal of the oxygen free radicals, enzymatically or non enzymatically has been shown to reduce the incidence of cancer in the animals as well as in clinical trials 6. The antioxidant activity of arecanut is worth investigating, as there are reports that epicatechin protects human fibroblasts from oxidative stress induced cell death involving caspase-3 activation 7 and in this report an attempt has been made to study in detail, the in-vitro antioxidant activity of aqueous arecanut extract.

On the basis of this consideration, the current work is aimed at evaluating whether arecanut treatment has protective effect on chemically induced inflammation. Our hypothesis is that, the use of areca nut extract may make it possible to prevent and/or alleviate the oxidative stress and inflammation in patients, who have a potential towards oral cancer.

The objective of this study is to evaluate the antioxidant and anti-inflammatory activity of arecanut. Lipid soluble (most importantly Vitamin E) and water soluble vitamins (vitamin C), Uric acid, bilirubin, thiols and glutathione antioxidants are involved in these processes.

On the contrary, there are reports that have not been scientifically tested, that oral cancer can occur in arecanut chewers, without a tobacco habit. There are studies 8 that illustrate the importance of arecanut habit with tobacco, in the development of oral cancer. Some of these showed signs of OSF- Oral Submucous Fibrosis.

Yet, detailed epidemiological and experimental findings have not backed these reports. The antioxidant activity of aqueous arecanut extract has no connection with the Oral Submucous Fibrosis that may lead to oral cancer.

The present study was carried out to determine the effect of the aqueous extract of arecanut to scavenge free radicals generated or produced in-vitro and thereby evaluate the antioxidant potential of this extract. A close link exists between the occurrence of inflammation and free radicals, many antioxidants have been reported to exert anti-inflammatory effects. For example, a small molecule mimic of SOD, could inhibit carrageenan induced paw oedema and hyperalgesia 12.

o   Determination of Superoxide Radical Scavenging Activity: Superoxide radical Scavenging Activity was determined by the Nitro Blue Tetrazolium Reduction Method 13. The reaction mixture contained Ethylene Diamine Tetraacetic Acid (6μm), Sodium Cyanide (3μg), Riboflavin (2μm), NBT (50μm), various concentrations of the extract (1 to 60μg/ml) and phosphate buffer (pH 7.8) in a final volume of 3ml. The tubes were uniformly illuminated with an incandescent lamp for 15 min and the Optical Density was measured at 560nm, before and after illumination. The percentage inhibition of superoxide generation was evaluated by comparing the absorbance values of the control and experimental tubes.

o   Determination of Inhibition of Lipid Per oxidation: Reaction mixture (0.5 ml) containing rat liver homogenate (0.1 ml, 25%w/v), ferrous (0.16mM) and Ascorbic Acid (0.06 mM) were incubated for 1 hr at 37°C in the presence and absence of the extracts (30 to 200μg/ml). The lipid peroxide formed was measured by TBARS formation and percent inhibition was calculated 16.

o   Determination of Diphenyl -2-Picryl Hydrazyl (DPPH) Radical Scavenging activity: DPPH in its radical form has an absorption peak at 515 nm, which disappeared upon reduction by an antioxidant compound 250μg/L 16 (Aquino R et al, 2001). Different concentrations of the extract (0.2 to 10μg/ml) were added to 1.5 ml of freshly prepared DPPH solution (0.25g/L in methanol) After 20 minutes the absorbance was measured at 515 nm, the percentage inhibition was calculated by comparing with the control.

o   Carrageenan induced Paw Oedema in mice: Animals were divided into three groups of six animals in each group. In all groups, the inflammation was induced by subplantar injection of 0.02 ml of freshly prepared 1.5 mg/ml carrageenan (1.5%) in normal saline, in right hind paw of mice. One group was kept as the control, the second group received 250 mg/kg bodyweight and the third group received 500 mg/kg b.wt of the aqueous extract orally 1 hour prior to the subplantar injection of carrageenan. The paw thickness was measured using vernier calipers before and 1 hour after carrageenan injection. Readings were taken every half hour for eight hours.

o   Dextran induced Paw Oedema in mice: Experiment was same as described above, except that single dose of 0.02 ml of 1% Dextran in 0.1% Carboxy Methyl Cellulose (CMC). Carboxy Methyl Cellulose was used as the inducer of inflammation. The paw thickness was measured using vernier calipers 1 hour before and after carrageenan injection. Readings were taken every half hour, for eight hours.

o   Statistical Analysis: Values were presented as mean and standard deviation. Repeated measures for ANOVA were done. Analysis was done separately for each group (control, 250mg, and 500mg). The software package used is SPSS (Statistical package for social sciences, Version 13). Level of significance - <0.05. 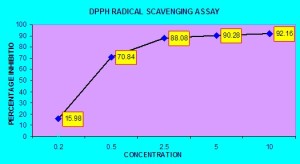 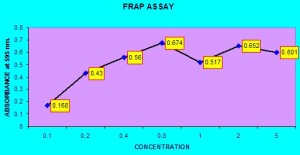 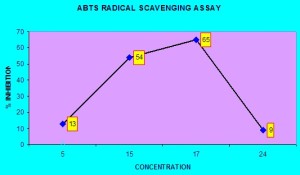 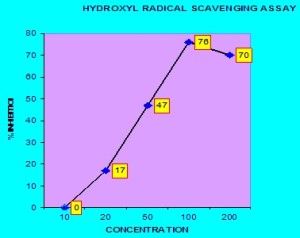 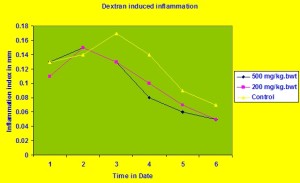 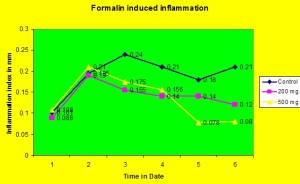 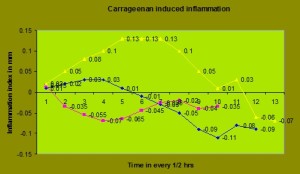 DISCUSSION: The antioxidant studies, in vitro showed that arecanut extract does not produce any oxidative stress and has significant antioxidant potential and could scavenge the free radicals effectively in vitro. These results are sufficient to validate the use of boiled dried aqueous arecanut extract, to scavenge free radicals, thus promoting and supplementing anti cancer therapy.

In-vitro studies, that were done to scavenge superoxide radicals, hydroxyl radicals, stable free radical, DPPH and ABTS showed 50% inhibition at 19.5μg/ml, 161μg/ml, 95μg/ml and 9.5μg/ml. Lipid peroxidation, induced in the in vitro system by Fe2+ ascorbate system in the rat liver homogenate in the presence and absence of extracts, showed the ability of arecanut extract to scavenge 50% free radicals at a concentration of 28μg/ml.

The ferric ion , reducing ability of the extract was seen and concentration for 50 % inhibition is 0.247μg/ml, as seen in FRAP assay. There are earlier reports that Arecanut extract and arecoline, reduced the extracellular release of superoxide anion in PMN (Poly morphonuclear leukocytes), the effects of arecanut extract and arecoline on intracellular levels of PMN showed, couple of interesting yet discrepant results.

In the presence of CB/ FMLP (Cytochalasin B and f Met-Leu-Phe), treatment of Human polymorphonuclear leukocytes, the intracellular levels of ROS in arecanut extract treated PMN decreased, when compared with HBSS treated PMN (Hank’s Balanced Salt Solution) 18. Ginger is used as a control, as it effectively boost the effectiveness of a network of antioxidants vitamin C, vitamin E, Glutathione, lipoic acid and coenzyme Q-10.

Arecanut extract was effective in reducing the inflammatory oedema, induced by all the three oedematogenic agents.

Anti-inflammatory activity of the extract was in a dose dependant manner. The extract at a concentration of 500 mg/kg b.wt showed significant inhibition of oedema, induced by the chronic inflammatory agent (formalin). This review will add on to the existing research generated, into the path physiology of inflammation, enabling various aspects of the inflammation response to be targeted. Further investigations using various other animal models should be pursued, followed by clinical trials and thereby present recommendations for management of inflammation.

CONCLUSIONS: The antioxidant studies, in-vitro showed positive results. These results, are sufficient by itself, to validate the use of boiled dried aqueous Arecanut extract, to scavenge free radicals, thus promoting and supplementing anticancer therapy. Invitro studies, that were done to scavenge superoxide radicals , hydroxyl radicals, stable free radical DPPH and ABTS showed 50 % inhibition at 19.5μg/ml, 161μg/ml, 95 μg/ml and 9.5μg/ml. Lipid peroxidation, induced in the in-vitro system by Fe3+ ascorbate system in the rat liver homogenate in the presence and absence of extracts, showed the ability of Arecanut extract to scavenge 50% free radicals at a concentration of 28μg/ml.

The ferric ion reducing ability of the extract was seen and the concentration for 50% inhibition is 0.247μg/ml, seen in FRAP assay. The anti inflammatory studies show dose dependent reduction in paw oedema, at 200 mg and 500 mg per kg body weight.