INTRODUCTION:Phytochemicals are excessively found in plant kingdom 1. In medicine about 50% drug used are of plant origin, in developing countries nearly 80% people depends on traditional plant based medicines for primary health care ,and only a small fraction of medicinal plants has been tested 2.

To solve the healthcare problems the attention to the medicinal plants are increasing world-wide. Plants are the origin of 25% of prescribed drugs in the world 3 and over 3000 species of plants have been reported to have anticancer properties 4.

Some studies have shown the positive correlation of the increased dietary intake of natural antioxidants with the reduced coronary heart disease and cancer mortality, as well as with longer life expectancy 9, 10. Moreover, many polyphenolic compounds have shown many health benefiting bioactive properties like antioxidant, anticancer, antiviral, anti-inflammatory activities 11-13.

Among the south Asian countries Bangladesh has a rich and prestigious heritage of herbal medicines, out of 500 species of medicinal plants about 250 species are used for the preparation of traditional medicines in Bangladesh but majority of these plants have not yet undergone chemical, Pharmacological and toxicological studies to investigate their bioactive compounds 14. Therefore much current research devoted to the Phytochemical screening for different types of biological activity.

L. purpureus sweet or Hyacinth bean is an important vegetable crop in Bangladesh and in winter an average yielding of 4.53 t of fresh pods per ha for a total yield of about 50000 t 15. In Bangladesh Hyacinth bean is grown for fodder and cover crop, the leaves and seeds contain 20-28% protein, with well balanced amino acid composition 16. The fresh pods and green seeds are eaten boiled or used in curries, mature seeds are used as pulses, often in soup; Sprouted seeds are occasionally sun-dried and stored for use as a vegetable 17. The Lablab bean species are extremely diverse 18, 19.

Shivashankar and Kulkarni 20 described three groups among the cultivated plants based on relative position of seeds in the pods. Cultivar group lablab is widely distributed and in this study we have discussed about two different color lablab bean which are most commonly used in Bangladesh as local name Sheem as a vegetable, the objective of this study is to find out the scientific basis which will accelerate the medicinal use of bean not only in Bangladesh but also world-wide.

Extraction of the Plant material: The fresh beans were washed with distilled water, minced into small pieces, the tested materials were sun dried for seven days and ground. Extraction was performed at room temperature. About 200 g of dried, ground plant material were soaked in 98% methanol for 48 h, stirring a sterilized glass rod, filtered, and the solvent removed in vacuum using a rotary evaporator at a temperature below 40°C. Extracts were stored in sample glass ware in the refrigerator prior to use.

In-vitro Anti-inflammatory Test: In-vitro Anti-inflammatory (Protease inhibition) Test was performed as described 21 by 1ml of extract solution transfer from the mother test tube to the respective marked test tube.0.03mg (2 or 3 finepart) of trypsin is added in each test tube. Then 1ml of 25mM tris HCl buffer (pH-7.4) is added. 1ml of 0.8% (w/v) case in solution is added. The mixture is incubated for an additional 20 minutes.2ml of HclO4 (70%) is also added to terminate the reaction. Cloudy suspension is centrifuged at 3000 rpm for 30 minutes. At last the absorbance of supernatant was taken at 280nm against buffer as blank.

Determination of Total Phenolic Content: The total phenolic content of extracts was determined using Folin-Ciocalteu method 22. The extracts were oxidized with Folin-Ciocalteu reagent and ware neutralized with sodium carbonate. The absorbance of the resulting blue color was measured at 760 nm after 60 min. using gallic acid as standard total phenolic content was expressed as mg GA equivalent/gm of extract.

Determination of Total Antioxidant Capacity: The antioxidant activity of the extracts of L. purpureus ware evaluated by the phosphomolybdenum method according to the procedure of Prieto et al. 24. The assay is based on the reduction of Mo (VI)-Mo (V) by the extract and subsequent formation of a green phosphate/Mo (V) complex at acidic pH. 0.3 ml extract was combined with 3 ml of reagent solution (0.6 M sulfuric acid, 28 mM sodium phosphate and 4 mM ammonium molybdate). The tubes containing the reaction solution were incubated at 95o C for 90 min. Then the absorbance of the solution was measured at 695 nm using a spectrophotometer (Shimadzu, UV-150-02) against blank after cooling to room temperature. Methanol (0.3 ml) in the place of extract is used as the blank. The antioxidant activity is expressed as the number of equivalents of ascorbic acid.

DPPH Radical Scavenging Activity: The free radical scavenging capacity of the extracts was determined using DPPH 25, 26. A methanol DPPH solution (0.004% w/v) was mixed with serial dilutions (0 to 500 µg) of L. purpureus extracts and after 10 min; the absorbance was read at 515 nm using a spectrophotometer. Ascorbic acid was used as a standard. The inhibition curve was plotted and IC50 values were calculated.

Reducing Power: The reducing power of L. purpureus extractives was determined according to the method previously described by Oyaizu 27. Different concentrations of L. purpureus extracts in 1 ml of distilled water was mixed with phosphate buffer (2.5 ml, 0.2 M, pH 6.6) and potassium ferricyanide [K3Fe(CN)6] (2.5 ml, 1%). The mixture was incubated at 50°C for 20 min. A portion (2.5 ml) of trichloroacetic acid (10%) was added to the mixture, which was then centrifuged at 3,000 rpm for 10 min. The upper layer of the solution (2.5 ml) was mixed with distilled water (2.5 ml) and FeCl3 (0.5 ml, 0.1%) and the absorbance was measured at 700 nm. Ascorbic acid was used as a reference standard. Phosphate buffer (pH) was used as blank solution.

Brine Shrimp Lethality Bioassay: Cytotoxic activity of the plant extracts was determined by brine shrimp lethality bioassay method 28. It is a recent development in the assay procedure of bioactive compounds, which indicates cytotoxicity as well as a wide range of pharmacological activities (e.g. anticancer, antiviral, insecticidal, pesticidal, AIDS, etc.) of the compounds 29. The assay is considered as a useful tool for preliminary assessment of toxicity and it has been used for the detection of fungal toxins, plant extract toxicity, heavy metals, cyanobacterial toxins, pesticides and cytotoxicity testing of dental materials. The eggs of Brine Shrimp ware hatched in a tank at a temperature around 370C with constant oxygen supply. Two days were allowed to hatch and mature the nauplii. Stock solution of the sample was prepared by dissolving required amount of extract in specific volume of pure dimethyl sulfoxide (DMSO). With the help of a pasteur pipette nauplii were exposed to different concentrations of the extracts.

Counting of Nauplii: The test tubes were kept at room temperature for about 24 hours and then, percent of mortality of napulli was counted with the help of a magnifying glass. The rate of mortality of nauplii was found to be increased in concentration of each of the samples. The median lethal concentration (LC50) was determined using the probit analysis method described by Finney 30, as the measure of toxicity of the plant extract. 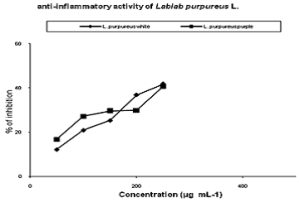 It can be inferred from the figure 1 that there is a significant anti- inflammatory activity compared with the results found by Kumarappan et al. 21. However, animal study and other studies are necessary for its activity and also there is a need to elucidate its mechanism/s of anti– inflammatory action.

Total Flavonoid and Total Antioxidant Activity: The total flavonoid and total antioxidant contents of Lablab purpureus L. were expressed in quercetin and ascorbic acid equivalents respectively that are shown in Table 1.

Different studies suggest that different types of polyphenolic compounds such as flavonoids, phenolic acids which are found in plants have multiple biological effects, including antioxidant activity 31. It is suggested that polyphenolic compounds have inhibitory effects on mutagenesis and carcinogenesis in humans, when up to 1 g was daily ingested from a diet rich in fruits and vegetables 32, 33. The maximum Total antioxidant activity (58.88±5.77mg/g) was shown by Lablab purpureus (L.) sweet ‘purple’ and The minimum was shown by Lablab purpureus (L.) sweet ‘white’ (46.89±9.02 mg/g). 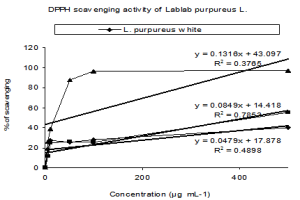 Reducing power capacity: By using the potassium Ferricyanide reduction method, the reductive capabilities of the plant extracts was identified in comparison with ascorbic acid which demonstrated at figure 3. The reducing power of the extracts was moderately strong while increasing dose it shows little increment.

Brine Shrimp Lethality Assay: The Methanolic extract of L. purpureus sweet ‘white’ and L. purpureus sweet ‘purple’ was tested for Brine shrimp lethality bioassay by using brine shrimp nauplii and DMSO as a solvent. Control was used to see whether DMSO had any effect on brine shrimp lethality or not. The control group of brine shrimp nauplii with and without DMSO exhibited no mortality. For the extract, the number of nauplii died and percent mortality was counted. The results are shown in the following table 2. 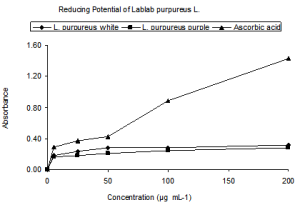 Each of the test samples showed different mortality rates at different concentrations, the percentage mortality increased with an increase in concentration. The variation in results may be due to the difference in the amount and kind of cytotoxic substances (e.g. tannins, flavonoids, triterpenoids, or coumarins) present in the crude extracts.  Figure 4 indicates plot of probit and predicted regression line of L. purpureus from where the LC50 values were calculated. All of the extracts showed 100% mortality to brine shrimp at 500 μg/mL concentration. LC50 values are 66.5 µg/ml to 960.06 μg/mL for L. purpureus sweet ‘white’ and L. purpureus sweet ‘purple’ respectively, which indicates moderate cytotoxic effect of two bean pods. 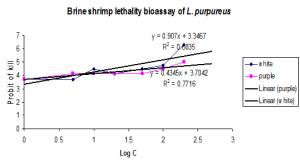 CONCLUSION: In conclusion, it was observed from the present study that L. purpureus sweet ‘white’, L. purpureus sweet ‘purple’ have significant anti-inflammatory activity as well as are potential source of natural antioxidants while L. purpureus sweet ‘white’ has the potential cytotoxicity where the percentage mortality increased with an increase in concentration. But further pharmacological studies are required to be undertaken to understand the underlying possible mechanisms of the observed activities as well as need to isolate, purify, Characterize active phytochemicals responsible for these bioactivities.