Inflammatory diseases including different types of rheumatic diseases are a major and worldwide problem. Now a day’s, world population moves towards herbal remedies for treatment. Several edible plants parts are used in traditional medicine for the treatment of inflammatory conditions. Amomum subulatum Roxb (Zingiberaceae), commonly known as large cardamom, is traditionally used for several medicinal purpose in India. The present study assessed anti-inflammatory activity of its fruits extracts (methanolic and aqueous) at a dose of 250 mg/kg and 500 mg/kg against carrageenan induced paw edema in rats. Both the extracts were able to show a dose dependent anti-inflammatory activity with compared to ibuprofen as a standard.

INTRODUCTION: Amomum subulatum Roxb. (family Zingiberaceae) is commonly known as ‘Badi Elaichi’ or Greater Cardamom. It is a tall, perennial herb, evergreen, herbaceous monocot plant, native to Sikkim and from there it is spread to neighboring areas like Darjeeling, Assam, Bhutan and Nepal. Sikkim state of India alone contributes 50% of the world’s production of large cardamom 1.

The fruit is anterio-posteriorly flattened, having 15-20 irregular, dentate-undulate wings which extend from the apex to downward for two-thirds of its length, trilocular many-seeded capsule. It contains 1.95 to 3.23% of essential oil 2 having typical characteristic flavor and possesses stimulant, stomachic, alexipharmic and astringent effects 3, 4.

Due to its pleasant aroma, it has been used as an essential ingredient in mixed spices. The aim of the present study is to evaluate  anti-inflammatory activity of the fruits on the induced acute inflammation using carrageenan  induced paw edema in rats.

Plant material: The fruits of A. subulatum were collected from the local market of Sikkim and identified by Prof. M. P. Sharma Department of Botany, Jamia Hamdard, New Delhi-110062.

Preparation of extract: The shade-dried fruits were powdered with a mechanical grinder. The fruits powder was extracted in a Soxhlet apparatus using methanol for about 48 hours. The solvent was removed from the extracts under reduced pressure by using rotary vaccum evaporator (12% yield). The powdered material (500 g) was percolated with cold water to get the aqueous extract (52 g).

The dried methanolic and aqueous extracts were stored in a desiccators to carry out phytochemical and pharmacological studies.

Animals:- Wistar albino rats (weighing 150-200 g) were used for the study. Animals were issued by The Central Animal House Facility of  Jamia Hamdard  and kept under standard laboratory conditions in 12 h light-dark cycle at 25±2oC, relative humidity of 50% and allowed food and water ad libitum. Animals were provided with pellet diet (Lipton, India) and water. Approval from the institutional animal ethical committee for the usage of animals in the experiments was obtained.

Acute Toxicity Studies:- There was no lethality observed up to dose of 3000mg/kg (Parmar et al 2008).

RESULTS: On the basis of experimental data, It was observed that there was significant and dose dependent anti-inflammatory activity of both the methanolic and aqueous fruits extract. The doses are administered orally both the extract at the dose of 250 mg/kg and 500 mg/kg of the body weight of the animals (see table 1 and graph 1). 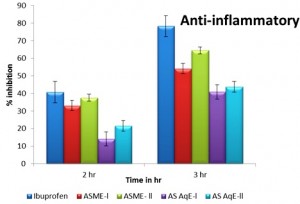 Ammomum subulatum shows a significant inhibition of inflammation, which is comparable to the standard drug iboprofen. As Phytochemical tests showed the presence of glycosides, carbohydrates, flavonoids, steroids and resin in both the methanolic and aqueous extract, they might suppress the formation of prostaglandins and bradykinins or antagonize their action and exert its activity.DISCUSSION: Carrageenan-indused rat paw edema is a suitable test, for evaluating anti-inflammatory drugs, which has frequently used to assess the antiedematous effect of natural products. On the basis of the study the data showed that both methanolic and aqueous fruits extract gave the significant anti-inflammatory activity. The methanolic extract is more effective than the aqueous extract. There is dose dependent inhibition of paw edema in rats Prostaglandins and bradykinins were suggested to play important role in carrageenan induced edema 11, 12. Both steroidal and non steroidal anti-inflammatory drugs can be tested by the carrageenan-induced paw inflammation test. The carrageenan induced paw edema model in rats is known to be sensitive to cyclo-oxygenase (COX) inhibitors and has been used to evaluate the effect of non-steroidal anti-inflammatory agents 13, 14.