ANTI-MICROBIAL AND ANTI ADHESIVE PROPERTIES OF LACTOBACILLUS AND BACILLUS SP.

ANTI-MICROBIAL AND ANTI ADHESIVE PROPERTIES OF LACTOBACILLUS AND BACILLUS SP.

ABSTRACT: The aim of this study was to determine the anti-microbial and anti-adhesive properties of a Lactobacillus and Bacillus, against several micro-organisms, including Gram-positive and Gram-negative bacteria. Biofilm producing micro- organisms were isolated from different samples. The isolated micro-organism were characterized and identified. The anti-microbial and anti-adhesive activities were determined. The bacteroicin production was quantified and was observed. The maximum bacteroicin production was observed among various isolated micoorganisms. The bacteroicin produced by the Lactobacilli and Bacilli showed antimicrobial activity against pathogenic micro-organisms (including Pseudomonas, Escherichia col, Staphylococcus, Aspergillus and Salmonella typhi), the minimum inhibitory concentration (MIC) were achieved for bacteroicins the most. The antagonistic characteristics of bacteriocin were studied by agar well diffusion method. Furthermore, the micro- organism showed anti-adhesive activity against most of the micro-organisms evaluated. Biofilm production was observed and quantified among various biofilm producing isolated micro- organisms.

INTRODUCTION: Several bacteriocins from Gram positive bacteria are very effective, have broad inhibitory spectra and may be used as antimicrobial agents for various practical applications 1 Many of these lactic acid bacteria produce bacteriocins 2. Bacteriocins are proteinaceous antibacterial compounds and exhibit bactericidal activity against species closely related to the producer strain 3. Manybacteriocins are active against food-borne pathogens especially against Listeria monocytogenes 4. Several types of bacteriocins from food-associated lactic acid bacteria have been identified and characterized, of which the important ones are nisin, diplococcin, acidophilin, bulgarican, helveticins, lactacins, and plantaricins 5. Bacteriocin production seems to be aimed to compete against other bacteria which are present in the same ecological niche 6, 7, 8.

Biosurfactants (BS) are amphiphilic compounds produced mostly by microbes on their cell surface, or secreted extracellularly and exhibit strong surface and emulsifying activities. They contain both hydrophobic and hydrophilic moieties that can reduce the surface or interfacial tension in liquids 9, 10. Bio Surfactants are complex molecules that include glycolipids, rhamnolipids, lipopeptides, polysaccharide-protein complexes, phospholipids, fatty acids and neutral lipids 11, 12, 13. Lactobacillus spp. are potent BS producing microorganism predominately found in the gastrointestinal microflora of human and animals. BS derived from lactic acid bacteria contributes to their high attributes of prevention of bacterial infections in the human body.

A number of studies reported the potential of lactobacilli as biosurfactant and bacteroicin producers and their significant role in public health 14, 15, 16. Biofilm formation associated with severe problems once the biofilm formation has prolonged. Blocking and leakage due to biofilm formation affect the function of the device and need to be change regularly. Application of biosurfactantto a surface modifies its hydrophobicity, interferes microbial adhesion and desorption processes; in that sense, the production of biosurfactant by probiotic bacteria in vivo can be considered as a defense against other colonizing food borne pathogens. Biosurfactant coating decreases the contact angle of silicone surface and it becomes hydrophilic 17, 18. Lactic acid bacteria and Bacillus spp. impaired biofilm formations and studied and observed in present work.

Isolation and Morphological characterization of Microorganisms:

The test applied include:

All the cultures were inoculated in their respective broths and incubated for 20 days. After incubation, cells were removed from the growth medium by centrifugation (10,000×g for 15 min, 4°C). The resultant supernatants are bacteriocins and can be stored at -20°C for further studies.

Standard curve for protein estimation Standard. Now after we have prepared a standard curve we check the OD of all the samples by putting them in volume.

The strains of pathogens were included in study (E.coli, S. typhi, S.aureus, A.niger, P.aeroginosa.) selective media were used to test the anti-microbial activity against these pathogens. 0.1 ml dilution of each pathogen were tested by pour plate method , four holes was made by using sterile cork borer and then pure cultures were added and  results were recorded for 3 days incubation with 24 hrs interval .

The strains of pathogens were included in study (E.coli, S. typhi, S.aureus, A.niger, P.aeroginosa.) selective media were used to test the anti-microbial activity against these pathogens. 0.1 ml dilution of each pathogen were tested by pour plate method , incubated anaerobically for 4 days for growth , then an another layer of media having  either pure culture and isolated culture was over laid over it , results were recorded after 4 days anaerobic incubation.

After incubation for 24 hours, the cultured cells from the microtiter plate were disposed by quickly shaking the plate over a waste tray. The plate was washed once with dH2O and air-dried, then 125 µl of 0.1% crystal violet solution (Fisher, Cat. no. C581-25) was added to each well. The plate was stained for 10 minutes at room temperature. The crystal violet solution was removed and the plate was washed twice thoroughly with distilled water and allowed to air-dry completely. 125 µl of 95% alcohol was deposited to each well containing the solution and the plate was incubated at room temperature for 10 minutes to allow the crystal violet stain to dissolve into the alcohol. The contents of the wells were then thoroughly mixed and the absorbance at 595nm was measured

The following cultures were isolated from different milk samples, soil and sewage samples and were named accordingly and the names are as follows:

After isolation of the bacterial strains their morphological characterstics were checked to ensure that the specific strain was obtained as shown in the following table: 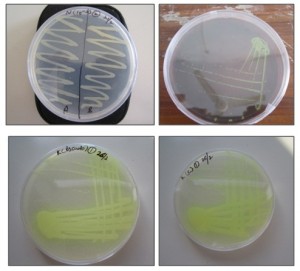 For E.coli: Biochemical characterization of E.coli:

Characterstics of Pseudomonas isolated from soilare as follows: 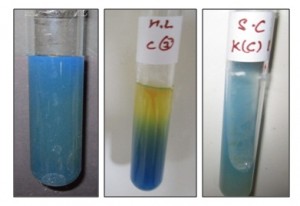 Results of Antagonistic Activity of Bacteriocins

Antagonistic activity of bacteriocins are checked against pathogens.

FIG.3: SHOWING THE ANTIMICROBIAL ACTIVITY OF THE BACTEROICINS AGAINST TEST PATHOGENS

Results of Biofilm Inhibition in the Presence of Bacteriocins:

When the biofilm producing organisms was grown in the presence of bacteriocins, it was observed that biofilm production was comparativelyless in some cases. L2 was overall very effective against each strain.

TABLE 9: EFFECTS OF BACTERIOCINS AGAINST THE BIOFILM PRODUCTIONS.

CONCLUSION: The strains obtained were Bacillus subtilis and Lactobacillus. The supernatant of strain L4 produced maximum amount of bacteriocins. The aims of this study were to isolate antimicrobial-producing Bacillus spp. from various sources and to screen their bacterocins as potential natural antibacterial agents for use against animal pathogens. The antagonistic activity of each bacteriocin was observed against the pathogens and significant zone of clearance was observed in case of maximum in case of B2 against all test pathogens and L1 against Staphylococcus and B4 against Psuedomonas. Upon checking the biofilm production it was observed that maximum amount of biofilm was produced by strains P6 and P3. Maximum biofilm inhibition by bacteriocins was observed in case of P3 in the presence of bacteriocin produced by L1, L2, L3, L5, B2 and B4.

ACKNOWLEDGEMENT: Any attempt at any level cannot be satisfactorily completed without the support and guidance of learned people. It is my gratitude to everyone who helped me in doing tis work.