INTRODUCTION: The condensation reaction between primary amine and carbonyl compound was first reported by Hugo Schiff and the products possessing the characteristic azomethine group are often referred as Schiff bases 1. Over last few decades, a tremendous upsurge has been observed in the study of Schiff bases and their metal complexes due to their variety in reactions, diversified industrial applications and a broad spectrum of biological activity coupled with ease of preparation 2, 3. The azomethine linkage and the presence of N, S and O donor atoms play important role in the biological properties as well as in the coordination of the metal complex. Bonding of metal ions to such biologically active compounds may enhance their biological activities 4.

Zinc is the most abundant essential trace mineral found in the human body after iron 5. Zinc is necessary for the physiological growth, reproduction and normal functioning of the brain and central nervous system and plays a key role in the metabolism of RNA and DNA and for gene expression 6, 7.

Urinary tract infections (UTI) are one of the most common bacterial infections affecting millions of populace every year accounting for significant morbidity and high medical costs.  Studies reveal that Women are more prone to UTIs than men and every fifth woman has a chance of developing a UTI during her lifetime. Approximately 25 % of women with an acute UTI reported with recurrent UTIs (RUTIs). Gram-negative bacteria Escherichia coli and Klebsiella pneumoniae are the most predominant uropathogens causing UTIs 8 - 10. Infections caused by drug-resistant bacteria producing ESBLs (Extended spectrum β-lactamase) and MBL (Metallo- β-lactamase) have become a serious problem for the healthcare industry 11. Another drug-resistant disease posing a major global health hazard to mankind is Tuberculosis. WHO reports 46.5 % TB burden in South Asia region of which India alone accounts for 23 % of World TB cases. In 2015, 37 % multi-drug resistance TB cases were detected worldwide accounting for 250000 deaths. The evolution of drug-resistant strains combined with co-infection from HIV creates a major huddle in the treatment of TB 12. Such situations demand a substantial need for the discovery of new compounds with enhanced activities to overcome the drug-resistant bacterial strains.

Present work is focused on the synthesis and characterization of Zn(II) complexes of our previously reported 13 aminothiophene Schiff bases derived from ethyl 2-amino-5,6-dihydro-4H-cyclo penta [b] thiophene-3-carboxylate and biological activity evaluation against gram-negative uro-pathogens and Mycobacterium tuberculosis.

MATERIALS AND METHODS: Analytical grade chemicals with purified and distilled solvents were used for synthesis and analysis. The elemental analysis was done by standard methods 14. ELICO Digital conductivity meter was used for molar conductance measurement with DMF (10-3M solution) as a solvent. The IR spectra were obtained from Perkin Elmer Model 1600 FTIR Spectro-photometer using KBr disc. Electronic spectra were obtained from a UV-Vis Jasco Spectrophotometer Model V-630. For calculation of magnetic susceptibility, Gouy balance was used along with Hg[Co(SCN)4] as a calibrant.

Anti-microbial Activity: For the evaluation of the antibacterial activity, the agar well-diffusion method was employed. Total ten isolates, five ESBL and five MBL uropathogens comprising five of each of the genera, Escherichia, Pseudomonas, Klebsiella, Proteus and Citrobacter (Table 2) were used in the studies. The bacterial cultures were procured from local medical facilities in Mumbai and characterized for ESBL and MBL production in our previous studies 15. The Zn(II) complexes were dissolved in HPLC grade DMSO. The final concentration of 25 μg/mL of the test compound was used in the experiment. All the bacterial strains were inoculated in 10 mL of Brain Heart Infusion (BHI) broth and kept for incubation at a temperature of 37 °C for one day.

The cooled, sterilized molten Mueller-Hinton agar (20 mL) was poured into sterilized Petri dish of 9 cm diameter under the aseptic condition and permitted to solidify. The plates were seeded with 0.4 mL test culture (0.1 O.D. at 540 nm). The inoculation was allowed to cool with gentle shaking. Wells were ditched in the medium using sterile cork borer of 8 mm diameter. Test compounds (50 μl) were added to these wells and the plates were kept for incubation at a temperature of 37 °C for one day to obtain the zones of inhibition. Control wells were set up using 50 μl of solvent (DMSO) for each test isolate. The anti-microbial activity was evaluated in triplicate set for each compound 16.

Antituberculosis Activity: The entire test com-pounds were assessed for antitubercular activity against M. tuberculosis (H37Rv strain) by the MABA (Microplate Alamar Blue assay) method using pyrazinamide, ciprofloxacin and streptomycin as positive controls. The final drug concentration tested from 100 to 0.8 μg/mL. In the experiment, a 96 well plate covered with de-ionized water in outer perimeter was used. In each well, 100 μl of the Middle brook 7H9 broth solution along with the serial concentration of test compound was added. These plates were sealed with paraffin and kept for incubation at a temperature of 37 ºC for five days.

On the 6th day of incubation freshly prepared 25 μl of 1:1 mixture of Almar Blue reagent and Tween solution (10% and 80%) was added to each well and these plates were again kept for incubation for another one day. On 7th day plates were removed, to check the MIC (Minimum Inhibitory Con-centration).  The lowest concentration of the test compound which prevented blue colour change to pink was reported as MIC 17.

Synthesis of Ligand: The Schiff bases were prepared from the condensation of ethyl 2-amino-5,6-dihydro-4H-cyclopenta[b]thiophene-3-carboxy -late with o-hydroxyl aldehyde derivative in 1:1 molar proportion as per reported method 13.

Synthesis of Metal Complexes: To an ethanolic solution of the Schiff base ligand (0.01 mol) the Zinc chloride (0.01 mol) dissolved in minimum quantity of ethanol was added dropwise with constant stirring. The pH was adjusted to 6-7 and the mixture was heated under reflux for 4 - 5 h on a water bath. A fine yellow precipitate of the solid complex formed was filtered by suction filtration and purified by washing with aqueous ethanol and ether and dried in vacuum.

of Zinc complexes. All the complexes are coloured, stable and are of good keeping quality. The complexes showed insolubility in common organic solvents apart from DMF and DMSO. The molar conductance values pointed towards the non-electrolyte nature of the complexes. The elemental analysis data is found in agreement with proposed molecular formula (Table 1).

The IR spectrum is an important tool for the identification of different functional groups present in the complex and their bonding mode with the central metal atom. The IR spectra of the free

ligands and the zinc complex were compared, in order to understand the bonding of Schiff base with the central zinc atom. The important IR bands and their assignments are depicted in Table 2.

The phenolic –OH band at 3000-3200 cm-1 present in the Schiff base ligand spectra does not appear in metal complexes spectra indicating the participation of phenolic oxygen in the coordination with central Zn(II) atom.

This is confirmed by the upward shifting of phenolic ν(C-O) band from the region 1307-1311 cm-1 in Schiff base spectra to higher wave number by 28-30 cm-1 in the metal complexes spectra.

The involvement of ester carbonyl group in the bonding is indicated by the downward shifting of the absorption band in the region 1682-1708 cm−1 in the Schiff base spectra due to ν(C=O) to lower wave number region by 38-66 cm-1 in the metal complexes spectra.

Further prominent band due to azomethine group 1597-1598 cm-1 in the Schiff base spectra is shifted to lower frequency by 19-27 cm-1 in metal complexes spectra confirming the involvement of azomethine nitrogen in coordination with zinc atom.

The stretching vibrations due to υ(C=S) band showed no significant change in the complex spectra, indicating non-participation of thiophene sulfur in the coordination.

The presence of the two medium intensity non-ligand band around 511-519 cm−1 and 415-432 cm−1 due to ν(M-O) and to ν(M-N) stretching vibrations respectively confirms the coordination of phenolic oxygen and azomethine nitrogen atoms with the zinc atom.

The far IR spectra of [Zn(L1)Cl] complex exhibited a non-ligand peak due to ν(M-Cl) at 366 cm−1 indicating coordination of chlorine atoms to the metal ion.

In the zinc complex electronic spectra, the π→π* transitions were slightly red-shifted Fig. 1 compared to Schiff base spectra indicating the coordination of ligand to the zinc atom with no change in the structural arrangement of ligand 18. The Zn(II) complexes are diamagnetic with d10 configuration and do not show any d-d transitions, hence the tetrahedral geometry of the ligand molecules around Zn(II) can be proposed 19.

On the basis of FTIR, elemental analysis, molar conductance, electronic spectra and magnetic susceptibility, the proposed structures of the Zn(II) complexes are shown in Fig 2.

Antimicrobial Activity:  For the evaluation of the antimicrobial activity of all zinc complexes, Kirby Bauer method was employed using gram-negative uropathogens [ESBL and MBL strains].  Multidrug resistance profile of these uropathogens against mainline drugs is shown in Table 3. The antimicrobial activity against these multidrug resistance uropathogens using DMSO as a solvent is depicted in Table 4. Schiff bases exhibited antimicrobial activity against isolate Ec-10, Kp-7 85 and 135, while zinc complexes showed antimicrobial activity against all the test isolates. In addition, Schiff bases HL2 and HL3 were also sensitive against uropathogen 220 and Schiff base HL3 against isolate - 618. All other isolates were resistant to Schiff bases but their metal complexes exhibited higher zones of inhibition (10-18.5 mm). Schiff base HL3 and HL2 exhibited higher zones of inhibition while isolate-135 was the most sensitive (14-18.5 mm) among all test isolate. The higher antimicrobial activity of zinc complex can be liked to chelate formation. As per chelation theory and cell permeability concept, penetrating power of complex increases with the lipophilicity. In chelate, the positive charge of the metal ion is shared by ligand donor atoms, resulting in π electrons delocalization over the whole chelate ring. This delocalization favors lipophilicity of metal complex through lipid layer allowing easy binding and penetration of the complex in the cellular structure resulting in the growth inhibition or cell death of the pathogens 20. 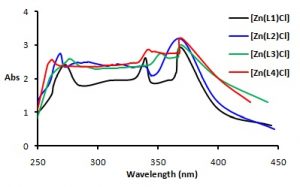 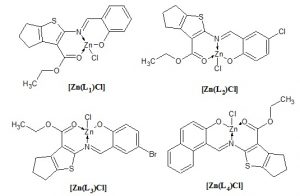 Antitubercular Activity: Antitubercular activity against M. tuberculosis (H37Rv) was evaluated using Microplate Alamar Blue Assay (MABA) method. pyrazinamide, ciprofloxacin and strepto-mycin were used as standard drugs Fig. 3 and Table 5. For the determination of MICs (Minimum Inhibitory Concentration) the lowest concentration at which a pink color was changed to blue color was considered.

All Schiff bases exhibited similar antimicrobial activity at MIC of 25.0 µg/mL. The activity of Schiff base may be attributed to the presence of azomethine bridging with substituted aromatic aldehydes and thiophene heterocyclic ring in the ligand structure. Only two zinc complexes ([Zn(L2)Cl]  and  [Zn(L3)Cl]) have displayed enhanced anti-tubercular activity (MIC = 12.5 µg/mL) compared to parent ligand.

This improved activity of zinc complex is the effect of chelation due to which amphiphilic nature of the complex increases resulting in deeper penetration of metal complex into the test isolates leading to growth restriction 21. 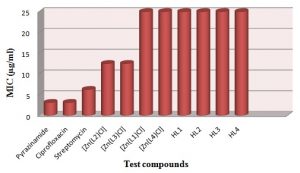 This study may provide a stepping stone for the future development of potential zinc complex from the aminothiophene Schiff bases.