ABSTRACT: Ruellia species belong to Acanthaceae family, and are perennial creepers with widespread medicinal uses including analgesic and anti-inflammatory activity. The objective of this study was to determine the qualitative phytochemical constituents and anti-oxidant activity of crude extracts from whole plant parts of Kenyan Ruellia species viz. Ruellia prostrata. Whole parts of the plants were collected, air-dried under shade and organic extraction was done by cold maceration using ethyl acetate and methanol. Aqueous extraction was done by boiling. Anti-oxidant activity was performed based on the ability of the aqueous, methanolic and ethyl acetate extracts to scavenge free radicals produced by 2,2-Diphenyl-1-picrylhydrazyl (DPPH). Ascorbic acid was used as the standard. Anti-oxidant tests were done at eight concentrations (3.9, 7.8, 15.6, 31.3, 62.5, 125, 250 and 500 µg/ml). The anti-oxidant activity of both plant extracts and ascorbic acid increased with increase in concentration. Methanolic and ethyl acetate extracts exhibited a higher anti-oxidant activity with IC50 values of 20.58 and 22.26 µg/ml respectively, relative to aqueous extract (IC50 of 51.92µg/ml). Ascorbic acid standard exhibited high anti-oxidant activity with IC50 value of 2.11µg/ml. The phytochemical screening tests were based on visual observation of colour change and precipitate formation. Phytochemical analysis revealed the presence of terpenoids, saponins, flavonoids, tannins and cardiac glycosides. Flavonoids and tannins are a major group of compounds that act as primary anti-oxidants. The presence of these compounds could attribute to the potent anti-oxidant activity of R. prostrata extracts. From this study, it was concluded that Ruellia prostrata could have anti-inflammatory activity.

INTRODUCTION: Medicinal plants play a critical role in the health sector of ancient and modern cultures. They are widely used as alternative therapeutic tools for prevention and treatment of many diseases 1.

Despite modern screening and discovery of drugs, plant-based medicines remain the lead compounds to the discovery of valuable drugs 2. Drugs of plant origin are locally available, often cheaper, with minimal side effects 3, 4. Nowadays, herbal drugs form an integral part of alternative medicine 5. Plants have been found to produce and accumulate secondary metabolites which Ruellia prostrata (Acanthaceae) is a perennial fall into various groups based on their biosynthetic origin. Humans have used these plant secondary metabolites as medicines and flavoring agents 6.

Some plant secondary metabolites belong to the glycoside group, flavonoids, tannins, saponins and alkaloids. Some of these compounds have biological effects including anti-oxidant activity 7. Normal biochemical reactions in the body produce several free radicals that play a critical role in the development of various diseases such as asthma, dementia, cancer, arthritis and Parkinson’s disease 8, 9. Anti-oxidants from plant materials play a significant role in termination of these free radicals, thereby protecting the body from these diseases. Herb mainly known for its traditional use as an anti-inflammatory and anti-cancer against the epidermis of nasopharynx region and possesses wound healing properties 10, 11.

Arthritis is an inflammatory disorder which manifests by destructive arthropathy and extra-articular manifestations, leading to severe disability and premature mortality 12. The present study aimed at screening the phytoconstituents and anti-oxidant potential of Kenyan Ruellia prostrata to make this plant useful for formulation of analgesic and anti-arthritic drug for management of arthritis.

Sample collection and preparation: Whole plant parts of R. prostrata were collected from Mwala sub-County, Machakos County, in December, 2010, taxonomised and the Voucher specimen (Ref. no. UoN/2010/598 December 16, 2010) deposited at the Department of Botany Herbarium, University of Nairobi. The plant sample was washed in water, chopped and shade-dried for three weeks. Once completely dried, grinding into coarse powder was done using an electrical grinder (manufactured by Jomo Kenyatta University of Agriculture and Technology, Mechanical Engineering Department) and extracted with methanol, ethyl-acetate and distilled water. The extracts were prepared by soaking 50g of plant powder in 500ml of (Methanol, ethyl-acetate and distilled water) for 72 hours. The extracts from organic solvents were concentrated using a rotary evaporator (BUCHI R-200) at 45ºc. The aqueous extract from distilled water was dried in a freeze-drier (Christ Alpha 1-4 LD). All the extracts were stored at 4°C until required for phytochemical screening and antioxidant activity.

Phytochemical analysis: Qualitative phytochemical screening was performed as described by 13. The extracts were tested for saponins, alkaloids, phenolic compounds, flavonoids, phytosterols and glycosides. The screening tests were based on observation of colour change and precipitate formation.

Test for alkaloids: Mayer’s test: In this test, 1mL of Mayer’s reagent (potassium mercuric iodine) was added to 1mL of the test solution and observed for a white precipitate, which is a positive indicator for the presence of alkaloids.

Test for tannins: Ferric chloride test: In this test, 0.5mL of 5% ferric chloride solution was added to 0.5mL of the sample solution. Formation of a dark-green colour would indicate the presence of tannins.

Test for flavonoids: To 1 mL of crude extract, 3 drops of ammonia solution were added followed by 0.5mL of concentrated hydrochloric acid. The formation of pale brown colouration would indicate the presence of flavonoids.

Test for glycosides (Keller-Killian test): Glycosides were tested by adding 1mL of 3.5% ferric chloride in acetic acid to 1mL of the sample solution followed by careful drop-wise addition of 1.5mL concentrated sulphuric acid by the sides of the test tube to form a separate layer at the bottom. A brown ring at the interface due to the presence of de-oxy sugar would be a characteristic of cardenolides and a pale green colour in the upper layer due to the steroidal nucleus would be taken as the indicator for the presence of cardiac glycosides.

Test for saponins: Plant extract (0.5 g) was added into 5 ml of distilled water. The mixture was shaken vigorously and observed for the formation of foam that would persist for 15 minutes. Development of a stable emulsion on addition of three drops of olive oil to the formed foam would confirm the presence of saponins 14.

Test for terpenoids: Crude extract (0.5g) was dissolved in 5mL of chloroform and evaporated to dryness. To this, 2mL of concentrated sulphuric acid was added and heated for about 2 minutes. A reddish brown colouration at the interface would indicate the presence of terpenoids.

2, 2-Diphenyl - 1- Picrylhydrazyl (DPPH) Scavenging Activity: The DPPH scavenging activity on the plant samples was done according to the procedure 15.  DPPH (0.5 mM) solution in methanol (3.94 mg in 100 ml) was freshly prepared. Concentrations ranging from 3.9-500 μg/ml for both extracts and standards were prepared. Equal volume of DPPH solution was added. The samples were kept in a dark place and after 30 minutes the absorbance was measured at 517 nm. The percentage of the DPPH radical scavenging was calculated using the equation given below:

Determination of inhibitory concentration (IC50): The results for anti-oxidant activity were presented as a line graph for three experiments. The concentration required to inhibit 50% of DPPH radical (IC50) was determined using the regression line of probit according to the log10 of the extract concentration.

Plants have an almost limitless ability to synthesize substances most of which are secondary metabolites of which at least 12,000 compounds have been isolated 16. Phytochemical substances play an important role in plant defence against microorganism, stress as well as interspecies protections. These plant components have been used as drugs for many years. Thus, phytochemical screening serves as the initial step in predicting the types of potential active compounds from plants 17.

Phytochemical screening of Ruellia prostrata aerial parts tested positive for saponins, phenolics, flavonoids, glycosides and terpenoids. Ethyl acetate extract showed absence of saponins and phenolics whereas all the extracts showed absence of alkaloids. Among these compounds, flavonoids, saponins and phenolics are important secondary metabolites and may be compounds responsible for medicinal values of the plant.

Antioxidant results for aqueous, methanolic and ethyl-acetate extracts of Ruellia prostrata species are presented in Fig. 1. 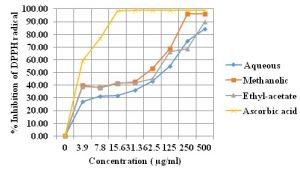 In the present study, the DPPH (1, 1- Diphenyl- 2- picrylhydrazyl) assay was conducted on aqueous, methanolic and ethyl-acetate extracts of Ruellia prostrata.  Methanolic extract had the lowest IC50 value (20.58 μg/mL), followed by ethyl-acetate extract (22.26 μg/mL) and aqueous extract (51.92 μg/mL). These extracts showed a significant DPPH scavenging activity when compared with positive control (ascorbic acid) which had an IC50 value of 2.11μg/mL. DPPH has a stable centred-nitrogen free radical which can be easily and effectively scavenged by anti-oxidants.

This free radical accepts an electron or hydrogen radical to become a stable diamagnetic molecule.  The anti-oxidant activity occurs when anti-oxidant molecules react with the radicals resulting to scavenging of the radical by hydrogen donation 19. Phenolics and flavonoids play a key role in anti-oxidant activity since they are highly effective electron donors 20. These compounds are documented to possess anti-carcinogenic and anti-inflammatory properties 21. Flavonoids are polyphenolic compounds that play a fundamental role in stabilizing lipid oxidation and are associated with anti-oxidant activity 22. As described by 23, phenolic compounds may have an inhibitory consequence on mutagenesis and carcinogenesis in humans when as much as 1.0 g is ingested daily from diet rich in fruits and vegetables.

CONCLUSION: Ruellia prostrata species contain flavonoids and phenolic compounds which act as primary anti-oxidants or free- radical scavengers. The presence of these compounds could be attributed to the potent anti-oxidant activity useful for formulation of analgesic and anti-arthritic preparations.

ACKNOWLEDGEMENTS: The authors are thankful to Kenya Medical Research Institute and the Department of Chemistry (JKUAT) for technical support. Special thanks also to Research, Production and Extension (RPE) Division of Jomo Kenyatta University of Agriculture and Technology for funding the project.