ABSTRACT: Cucumis sativus (Cucumbers) have not received as much press as other vegetables in terms of health benefits, but this widely cultivated food provides us with a unique combination of nutrients. At the top of the phytonutrient list for cucumbers are its cucurbitacins, lignans, and flavonoids. These three types of phytonutrients found in cucumbers provide us with valuable antioxidant, anti-inflammatory, and anti-cancer benefits. Cucumbers are a valuable source of conventional antioxidant nutrients including vitamin C, beta-carotene, and manganese. Fresh flowers of Cucumis sativus were extracted and evaluated for antioxidant activities by 2,2-Diphenyl 1-picryl hydrazyl solution (DPPH), 2,2'-azino-bis(3-ethylbenzthiazoline-6-sul- phonic acid (ABTS) assay and anti-inflammatory activites by human blood cell (HRBC) membrane stabilization method and Inhibition of albumin denaturation method. The results obtained showed that the compound isolated from ethyl acetate fractions of Cucumis sativus flowers can be considered as good sources of anti-oxidants, anti-inflammatory and can be incorporated into the drug formulations. This study justifies the anti-oxidants, anti-inflammatory activity of the compound isolated from ethyl acetate fractions of Cucumis sativus flowers. Further detailed analysis of this sample is required to identify the presence of bioactive compounds responsible for anti-oxidants, anti-inflammatory activities. Studies are highly needed for future drug development

INTRODUCTION: The present study was conducted to study the anti-inflammatory activity of Cucumis sativus (Family of Cucurbitaceae) seed in Carrageenan-induced paw oedema model and xylene induced ear oedema model using Albino Wistar rats. A significant inhibition of carrageenan induced rat paw oedema comparable to that produced by indomethacin, the standard anti-inflammatory drug was obtained with all the two doses of the acetone extract, tested in the present study.

The results from present study indicate the efficacy of the acetone extract as a therapeutic agent in acute as well as chronic inflammatory conditions. Thus it could be concluded that Cucumis sativus seed extracts possess significant anti-inflammatory properties.1

Every living body inhales daily huge amount of oxygen that is used to carry on different metabolic process that results in producing different secondary metabolites, commonly oxidants including hydrogen per oxide, nitric oxide, superoxide anion, hydroxyl radicals, peroxynitrite anions, alkylperoxyl and hydroperoxyl. These oxidants involve in tissue damaging in human body that consequently result indifferent diseases and before time aging. In human body enzymatic and non enzymatic defense systems consist of endogenous antioxidants such as catalase, glutathione, peroxidase and super dismutase. This defense system fight against oxidants but many factors such as old age, alcohol and unhealthy diet decreases the antioxidant potential of endogenous antioxidants 2. The deficiency of endogenous antioxidants can be fulfilled either by synthetic or naturally occurring antioxidant, however, synthetic antioxidants are associated with side effects and their long run use is discouraged, 3, 4 the only safe alternative to endogenous antioxidants is natural antioxidants. Heat-stress causes increased oxidative stress and damage in the liver of young and old animals (Hall et al., 2000, Hall, Xu, et al., 2000, Zhang et al., 2004.5, 6, 7

Antioxidants play a major role in protecting cells from the actions of reactive oxygen species (ROS) by reducing chemical radicals and preventing the process of lipid peroxidation (Nishigaki et al., 1992 & Yu 1994).8, 9 Inflammation can be classified as acute and chronic. Acute inflammation is a short-term process which is characterized by the classic signs of inflammation - swelling, redness, pain, heat, loss of function and due to the infiltration of the tissues by plasma and leukocytes. It occurs as long as the injurious stimulus is present and ceases once the stimulus has been removed, broken down, or walled off by scarring (fibrosis).

The process of acute inflammation is initiated by the blood vessels local to the injured tissue, which alter to allow the exudation of plasma proteins and leukocytes into the surrounding tissue. The increased flow of fluid into the tissue causes the characteristic swelling associated with inflammation (Deraedt R et al., 1980) 10 and the increased blood flow to the area causes the reddened color and increased heat. The blood vessels also alter to permit the extra vasation of leukocytes through the endothelium and basement membrane constituting the blood vessel. Once in the tissue, the cells migrate along a chemotactic gradient to reach the site of injury, where they can attempt to remove the stimulus and repair the tissue.

The traditional medical practitioners use this plant to cure inflammation and pain (Govindarajan R et al., 2007) 11. Cucumis sativus has anti-inflammatory effect that support to the traditional use of this plant for the treatment of related diseases. This study also suggests for the further detail investigation of mechanisms of the pharmacological (Kirkova M, 1992) 12 effects and also to isolate the active compound(s) responsible for those properties. The present study has been undertaken to investigate the anti-oxidants, anti-inflammatory potential of the compound isolated from ethyl acetate fraction of Cucurbita maxima flowers.

The DPPH free radical is reduced to a corresponding hydrazine when it reacts with hydrogen donors. The DPPH radical is purple in colour and upon reaction with hydrogen donor changes to yellow colour. It is a decoloration assay, which is evaluated by the addition of the antioxidant to a DPPH solution in ethanol or methanol and the decrease in absorbance was measured at 490nm20.

2,2-Diphenyl 1-picryl hydrazyl solution (DPPH, 100mM): 22mg of DPPH was accurately weighed and dissolved in 100ml of methanol. From this stock solution, 18ml was taken and diluted to 100ml using methanol to obtain 100mM DPPH solution.

21 mg of the solid obtained from ethyl acetate extract was dissolved in distilled Dimethyl sulfoxide (DMSO) to obtain a solution of 21mg/ml concentration. This solution was serially diluted to obtain lower concentrations.

10mg each of ascorbic acid and rutin were weighed separately and dissolved in 1ml of Dimethyl sulfoxide (DMSO) to get 10mg/ml concentrations. These solutions were serially diluted with DMSO to get lower concentrations.

The assay was carried out in a 96 mm well microtitre plate.  To 200ml of DPPH solution, 10ml of each of the test sample or the standard solution was added separately in wells of the microtitre plate.  The final concentration of the test and standard solutions used were 1000, 500, 125 and 31.25 mg/ml. The plates were incubated at 37o C for 30 min and the absorbance of each solution was measured at 490 nm, using a micro plate reader.

Capacity of the extract:

The total antioxidant capacity was determined by phosphormolybdenum method and is based on the reduction of Mo (VI) to Mo (V) by the antioxidant compounds and the formation of a green Mo (V) complex which has the maximal absorption at 695nm.

Preparation of test and standard solutions:

Weighed accurately 55mg of the sample and the standard ascorbic acid and dissolved in 5ml of DMSO. The lower dilutions were made serially with Dimethyl sulfoxide(DMSO).

An aliquot of 0.1ml of the sample solution containing a reducing species in Dimethyl sulfoxide(DMSO) was combined in an Eppendorff tube with 1ml of reagent solution (0.6mM Sulphuric acid, 28mM sodium phosphate, and 4mM ammonium molybdate). The tubes were capped and incubated in water bath at 95 °C for 90min. The samples were cooled to room temperature, and the absorbance of each solution was measured at 695nm. The total antioxidant capacity was expressed as mM equivalent of ascorbic acid (Mojca et al., 2005).

ABTS radical scavenging activity was performed as described by Re et al. (1999) with a slight modification. 7.0 mM ABTS in 14.7 mM ammonium peroxo-disulphate was prepared in 5.0 ml distilled water. The mixture was allowed to stand at room temperature for 24 hours. The resulting blue green ABTS radical solution was further diluted such that its absorbance is 0.70 ± 0.020 at 734 nm. Various concentrations of the sample solution dissolved in ethanol (20.0 μl) were added to 980.0 μl of ABTS radical solution and the mixture was incubated in darkness for 10 min. The decrease in absorbance was read at 734 nm. A test tube containing 20.0 μl of ethanol and processed as described above was served as the control tube. Different concentrations of ascorbic acid were used as reference compound.

The method as prescribed by Gopal krishnan et al., 2009; Sakat et al., 2010 was adopted with some modifications. The blood was collected from healthy human volunteer who had not taken any NSAIDS for 2 weeks prior to the experiment and mixed with equal volume of Alsever solution (2 % dextrose, 0.8 % sodium citrate, 0.5 % citric acid and 0.42 % NaCl) and centrifuged at 3,000 rpm. The packed cells were washed with isosaline and a 10 % suspension was made.

Various concentrations of test drug were prepared in mg/ml using distilled water and to each concentration, 1 ml of phosphate buffer, 2 ml hypo saline and 0.5 ml of HRBC suspension were added. It was incubated at 370C for 30 minutes and centrifuged at 3,000 rpm for 20 minutes and the hemoglobin content of the supernatant solution was estimated spectrophotometrically at 560 nm. Diclofenac (100 Jg/ml) was used as reference standard and a control was prepared by omitting the test drug. The experiments were performed in triplicates and mean values of the three were considered. The percentage (%) of HRBC membrane stabilization or protection was calculated using the following formula,

The method as prescribed by Sakat et al., 2010 was followed with some modifications. The reaction mixture was consisting of test sample and 1% solution of bovine albumin fraction. pH of the reaction mixture was adjusted using small amount of HCl. The sample extracts were incubated at 37°C for 20 minutes and then heated to 51°C for 20 minutes. After cooling the samples the turbidity was measured spectrophotometrically at 660 nm. Diclofenac sodium was taken as a standard drug. The experiment was performed in triplicates and the mean value of the three was considered.  Percent inhibition of protein denaturation was calculated as follows, 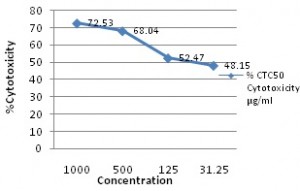 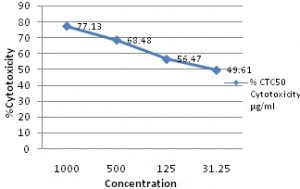 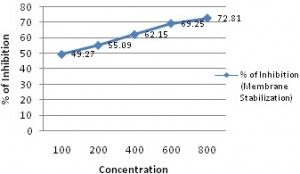 TABLE 4: THE INHIBITION OF ALBUMIN DENATURATION ACTIVITY OF THE COMPOUND ISOLATED FROM ETHYL ACETATE FRACTIONS OF CUCUMIS SATIVUS FLOWERS. 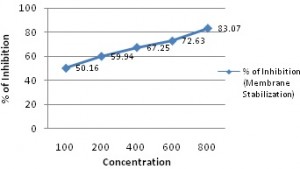 DISCUSSION: The only safe alternative to endogenous antioxidants is natural antioxidants. Fruits, vegetables and allied products are best known dietary sources of antioxidants for maintaining the cellular functions in best way. Fruits and vegetables provide protection against chronic diseases such as cancer and cardiovascular disorder due to the presence of antioxidants especially vitamins, phenolics and flavonoids, coumarin, tannins and stilbenes 13. Due to excellent potential of these compounds against chronic diseases, different reports have shown the vital role of antioxidants of fruits and vegetables to maintain body function in normal mode 14. Patilet al were studied on pharmacological evaluation of wound healing potential of Cucumis sativus. He stated that aqueous extracts of Cucumis sativus have proper efficacy on wound healing. Herbal paste preparation showed significant (P<0.05) improvement on maturation, wound contraction and epithelialization.15

The results strongly suggest anti-inflammatory effect and anti-oxidant effects by percentage of inhibitions, which are explained in the table1, 2, 3, 4. The medical use of Cucumis sativus flowers as a useful remedy in various disorders could possibly be because of its excellent anti-inflammatory and antioxidant potential. However, chemical constituents and mechanism responsible for the pharmacological activities remain to be investigated.

CONCLUSION: In conclusion, the present study has confirmed that DPPH assay, total anti-oxidant capacity and ABTS have showed a strong antioxidant activity and also the human red blood cell (HRBC) membrane stabilization, Inhibition of albumin denaturation indicated the anti-inflammatory activity. The characterization of flavonoidal components and other components of Cucumis sativus flowers are of interest for further examination and shall be carried out in future studies. These findings provide scientific evidence to support traditional medicinal uses and indicate a promising potential for the development of an antioxidant and anti-inflammatory agent from Cucumis sativus flowers. This medicinal plant by in vitro results appear as interesting and promising and may be effective as potential sources of novel antioxidant and anti-inflammatory drugs.

ACKNOWLEDGEMENTS:  The authors wish to thank Alpha Omega High-Tech Bio Research center, Salem for their generous support for the study. This study is a part of Ph.D from Periyar E.V.R. College (Autonomous), Bharathidasan University, Trichy.