INTRODUCTION:Numerous compounds with biological activity have been investigated. However many of them are not suitable for therapeutic use due to their toxic, carcinogenic and mutagenic properties. Nowadays, it is possible to make modifications of active chemical structures, in order to synthesize compounds with improved therapeutic activity and reduced toxicity.

Coumarins have important effects in plant biochemistry and physiology, acting as anti-oxidants and enzyme inhibitors. The coumarins and its derivatives display a remarkable array of biochemical and pharmacological actions, some of which suggest that certain members of this group of compounds may significantly affect the function of various mammalian cellular systems. A lot of biological parameters should be evaluated to increase understanding of mechanisms by which these coumarins act. The coumarins are extremely variable in structure, due to the various types of substitutions in their basic structure, which can influence their biological activity.  The coumarins and its derivatives have long been recognized to possess anti-inflammatory, analgesic, anti-fungal, anti-bacterial, anti-viral, anti-psychotic, anti-tuberculosis, anti-HIV, and anti-carcinogenic activities 1.

In recent years, a large number of new therapeutic agents have been produced by medicinal chemist, working generally as a part of interdisciplinary teams. The systemic research in pharmaceutical laboratory has led to the introduction of more and more synthetic drugs in the modern times. The present study was designed to investigate the in vitro anti-inflammatory and in vitro anti-oxidant potential of some synthesized coumarin derivatives of 3 (substituted) chromen-2-one. Oxidative stress induced by reactive oxygen species including free radicals such as hydroxyl radicals, nitric oxide radicals, superoxide anions, are believed to be a primary pathogenesis of various degenerative disease 2, 3. Anti-oxidants may offer major defence against radical mediated toxicity by protecting the damages caused by free radicals. Anti-oxidant based drugs for the prevention and treatment of complex diseases, like atherosclerosis, stroke, diabetes, and cancer, have appeared in last decade’s 4. These properties were attracted the researchers in a great deal of research interest in anti-oxidants.

There are evidences for the participation of reactive oxygen species in the etiology and pathophysiology of human disease, such as neurodegenerative disorders, inflammation, viral infections, autoimmune gastro- intestinal inflammation and gastric ulcer 5. Drugs with multiple mechanism of protective action, including anti-oxidant activity, may be highly effective in minimizing tissue injury in human diseases. It has been demonstrated that many drugs and formulations possess potent anti-oxidant action.

The present study was carried out to determine the anti-inflammatory effect of 3(Substituted) Chromen – 2-one by membrane stabilization method.

General procedure for the preparation of 3-(substituted) Chromen-2-one (a-f): Different synthetic compounds of 3-(substituted) chromen-2-one (a-f) were prepared by the method of Lakshmi Narayanan B et al., 1. A mixture of 3-acetylchromen-2-one (0.0304mol) and appropriate aldehyde (0.0304mol) was stirred in water (40 ml) and ethanol (25 ml) in presence of Sodium hydroxide (0.0302mol) for 5 hours. The reaction mixture was kept overnight in an ice bath. Then the above mixture was poured into a beaker containing water. The precipitated product was filtered and recrystallized from ethanol (Scheme 1). 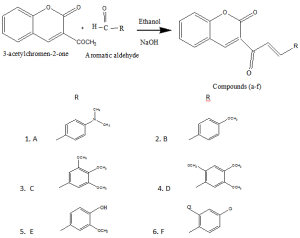 NAMES OF THE SYNTHESIZED COMPOUNDS

Experimental Method: The synthesized compounds were used in the dose of 100µg/ml. Aceclofenac sodium (100µg/ml) was taken as a standard. The reaction mixtures (4.5ml) consists of 2ml of hypotonic saline (0.25% NaCl), 1ml of 0.15 M phosphate buffer (pH 7.4,0.15M), and 1ml of sample solution (100 µg/ml) in normal saline, 0.5 ml of 10% V/V erythrocyte suspension in normal saline were added. For test control, 1 ml of isotonic saline was used instead of sample solution while product control tests lacked red blood cells. All the mixtures were incubated at 56oC for 30 minutes. Then they cooled under running tap water and centrifuged at 3000 rpm for 20 minutes. The absorbances of the supernatants were read at 560 nm. Percentage membrane stabilizing activity was calculated as follows;

DPPH Free Radical Scavenging Activity: DPPH is usually used as a reagent to evaluate free radical scavenging activity of anti-oxidant. It is a stable free radical and accepts an electron or hydrogen radical to become a stable diamagnetic molecule. The reduction capability of DPPH radical with synthesized compound is determined by decrease in absorbance at 517 nm induced by anti-oxidant. Ascorbic acid is the reagent used as standard. The synthesized compounds are able to reduce the stable DPPH radical to the yellow colored di-phenyl picryl hydrazine. The scavenging effect of synthesised compounds with DPPH radical was found to be in the following order: compound C > D > B > E > F > A.

Nitric Oxide Radical Scavenging Activity: Nitric oxide is a potent pleiotropic mediator of physiological processes such as smooth muscle relaxation, neuronal signalling, inhibition of platelet aggregation and regulation of cell mediated toxicity. The scavenging effect of synthesized compound against nitric oxide was found to be compound C > E > D > B > F > A.

ACKNOWLEDGEMENT: Authors are thankful to the Principal of Karpagam College of Pharmacy, Coimbatore, India, for providing constant research and moral support to conduct this work and also the facilities provided.