INTRODUCTION: Hepatocellluar carcinoma (HCC) is the one of the commonest cancer, ranking third with very high morbidity and mortality rates and poor prognosis. Therefore, there is an urgent quest for improvement of therapeutic activity and selectivity of anti-cancer agents or drug combinations from natural source with no or limited toxicity for developing cancer therapeutics

Considering the continuing need for effective anti-cancer agents, medicinal plants play inexhaustible source of anticancer drugs in term of both variety and mechanism of action 1. Over 50% of anticancer drugs approved by United states Food and Drug Administration, originated from natural resources, especially from  terrestrial plants. The major type of constituents such as phenolics, flavonoids, triterpenoids, steroids, tannins, lignans, coumarins may be responsible for the anticancer activity in the plant extract 2, 3.

Symplocos racemosa Roxb. belongs to a unigeneric family Symplocaceae; is a small evergreen tree reaching a height of 6-8.5 m and diameter of 15 cm. It is found commonly in the plains and hills of northern India and other Asian countries, up to a height of 1400 m. The common names of Symplocos racemosa are astringent bark, lodha (means glorious, use in opthalmia),lodhra (means use in opthalmia), rodhra, lodhraka 4. Ethnobotanical literature indicates that the bark of Symplocos racemosa has been widely used in liver complaints, bowel complaints such as diarrhoea, dysentery and dropsy, skin diseases, ear diseases, eye disease, uterine complaints, vaginal and menstrual disorders, tumors, fever, ulcers and scorpion-string 5, 6. In Ayurveda pittaja arbuda and medoja arbuda tumors are treated withbark of Symplocos racemosa in combination with other various drugs. The powder of Symplocos racemosa in combination with Curcuma domestica, Soymida febrifuga, is mixed with honey which has been used as an external remedy for tumors. The bark of Symplocos racemosa has many phytochemicals with various bioactivities and also indicated in traditional system of medicines like ayurveda and unani. 7, 8, 9. Phytochemical reports on this bark have revealed the many kinds of chemicals, such as phenolic glycosides, triterpenoids, steroids, alkaloids, tanninsand red coloring matter 10, 11, 12.  S. racemosa having rich source of various glycosides such as phenolic glycosides: benzoyl salireposide and salireposide which having phosphodiestrase inhibitory activity, ethyl substituted glycoside: 1-ethyl brachiose-3’-acetate, ketochaulmoogric acid, nonaeicosanol, triacontyl palmitate and methyl triacontanoate having lipoxygenase and urease inhibitory activity, phenolic glycosides: symplocomoside and symponoside having thymidine phosphorylase inhibitory activity 13, 14.

0.1mM DPPH solution was prepared in ethanol.1 ml of this solution mixed with 3 ml of test solutions (5-25µg/ml). The mixture was vigorously shaken and allowed to stand for 30min at room temperature. Absorbance was measured at 516nm 15.

20mM H2O2 solution was prepared in phosphate buffer saline (pH 7.4). 2 ml of this solution mixed with 1 ml of test solutions (5-25µg/ml). The mixture was vigorously shaken and allowed to keep for 10min at room temperature. Absorbance was measured at 230nm 16.

BRL 3A (normal rat liver cell) and Hep3B (human hepatoma cell) cell line were used in the experiment, have been obtained from National Centre for Cell Science (NCCS), Pune. The cells were matained in DMEM, supplemented with 10% FBS, penicillin (100IU/ml), streptomycin (100µg/ml) and amphotericin-B (5µg/ml) in a humidified atmosphere of 5 % CO2 at 37 °C.

Absorbance of the samples was measured using a microplate (ELISA) reader at wavelength 570nm. Three independent experiments were performed. The effect of the ethyl acetate soluble fraction of methanol extract of Symplocos racemosa on the viability of normal liver and hepatoma cells were as the % of viability using following formula. 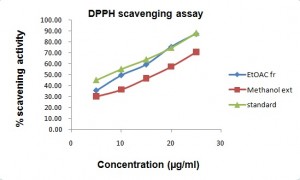 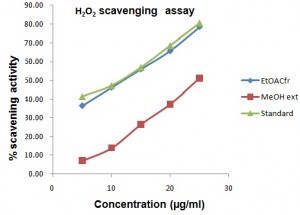 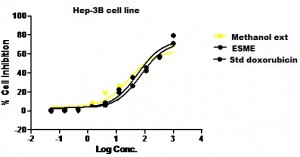 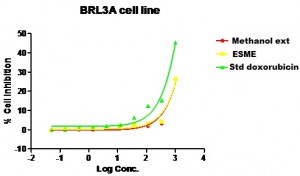 Role of anti oxidant in chemoprevention:

Free radicals are highly reactive species produced in the body during normal metabolic function or introduced from the environment. These are the atoms or groups of atoms that have at least one unpaired electron, which makes them highly reactive. Reactive oxygen species (ROS) react with free radicals to become radical themselves. Anti oxidants counteract these cellular by products called as free radicals, and bind them before they cause the damage. Free radicals believed to play role in different health conditions such as cancer, ageing process and atherosclerosis 18. Exogenous source of free radicals include smoking, ionizing radiation, certain pollutants, organic solvents and pesticides. As far as, ROS initiate the peroxidation of membrane lipids leading to accumulation of lipid peroxidation. Therefore, much attention has been focused on natural anti oxidants which inhibit the lipid peroxidation and protect the tissue from damage due to free radicals 19. Ethyl acetate soluble fraction showed the potent anti oxidant activity by DPPH free radicals and hydrogen peroxide free radical scavenging assay method. Due to this evident, ethyl acetate soluble fraction showed the prominent in vitro anti cancer activity against hepatocellular carcinoma (Hep3B cell) indicating the chemoprevention.

CONCLUSION:  Ethyl acetate soluble fraction of methanol extract showed the potent anti-oxidant activity and cytotoxic potential against the human hepatocellular carcinoma cells, whereas not affected the normal cells. It may be due to the presence of phytochemicals such as phenolic glycosides, steroids and triterpenoids. The further research work has been going on the phytoconstituents which have been responsible for the anti-cancer activity. The phytochemicals may serve as a novel therapeutic agent in the treatment or prevention of hepatocellular carcinoma, and deserve to be investigated further.

ACKNOWLEDGEMENT: We are very much grateful to Director and staff, Pharmanza Herbal Pvt. Ltd., At post: Kaniya Dist: Anand; India for their immense, scientific and kind support throughout the research work.