ABSTRACT: This study was performed to determine the anti-ulcer effects of ethanol extract of Parkia speciosa on Indomethacin induced peptic ulcer in Albino rats. Rats of female sex weighing between 150 g - 200 g were used. Rats were divided into six groups with three rats in each group. Omeprazole (20 mg/kg) were used as a standard drug for this study. Parkia speciosa extract were given in three different doses comprised of 100 mg/kg, 200 mg/kg and 400 mg/kg. Pre-treatment were done for 14 days and at the end of the 14th day, rats were kept fasted for 24 hours before administration of Indomethacin at 30 mg/kg. Administration of drugs was done orally. At the end of the study, rats were sacrificed and stomachs were open and stored in 10% formalin solution. The acidity of gastric juice, gastric mucosal lesion and histological changes were studied.  Extracts of Parkia speciosa showed a significant (P<0.05) reduction in acidity of gastric juice as compared to the ulcer control group.  Two doses of Parkia speciosa ethanol extract that is 200 mg/kg and 400 mg/kg showed significant (P<0.05) reduction in lesion length as compared to ulcer control group. Histological studies showed lesser collagen and fibrosis were present in tissue from rats treated with Parkia speciosa extract compared to tissues of rats from ulcer control group

The main way to heal peptic ulcer would be to reduce gastric acid production and to increase the gastric mucosal protection 7. H2 receptor blockers and proton pump inhibitors reduce acid secretion and aid the healing of ulcer but it does not prevent the re-occurrence of it where as antacid only gives relief and does not inhibit gastric secretion or aids in healing. Synthetic drugs have side effects such as arrhythmias, impotence, gynaecomastia, enterochromaffin-like cell, hyperplasia, and haemopoeitic changes 8. Therefore, alternative ways are being explored to produce drug from natural product derived from plants to treat peptic ulcer 9. Parkia speciosa is better known as ‘petai’ among Malaysians. It is from the family Fabaceae – Mimosoideae. Parkia speciosa seed are encapsulated in the pods 10. This seeds are also reported to treat diseases such as diabetes, cholera and kidney pain 11. Studies showed that Parkia speciosa had a hypoglycaemic effect of chloroform extract from empty pods 12, 13. It is also reported to have anti-bacterial activity 14, 15 and anti-oxidative effect 16. The current finding showed that Parkia speciosa seed has hemagglutinating activity of proteins 17.

The commercially available fresh pods of Parkia speciosa were obtained from local markets in Ipoh, Perak, Malaysia and were authenticated by the Institute of Bioscience, UPM, Serdang, Selangor.  A voucher specimen No: SK 2150/13 was deposited in the herbarium.

The seeds of Parkia speciosa were separated from the pods and cleaned. The seeds were dried for ten days and were powdered using an electric blender. The powder was soaked for 48 hours in ethanol. Then the powder was filtered and the filtrate was evaporated in a rotary evaporator. The crude material Parkia speciosa was obtained and it was stored in an airtight container until the study was conducted 18.

The ethanol extract of Parkia speciosa (EEPS) were tested for flavonoids 19, tannins and phenolic compound 20 and saponins and terpenoids 21.

Albino rats of female sex weighing between 150 g to 200 g were used for the study because female rats are sensitive to changes compared to male rats 23. They were maintained on the synthetic pellet feed and clean water ad libitum. Animals were housed in controlled conditions with a temperature of 25 ± 2°C, 55 ± 10% relative humidity and 12/12 hrs light-dark cycle environment 24. Animals were kept in cages at least 5 days before dosing to allow for acclimatisation to laboratory condition. The experimental protocol was approved by the University Animal Ethics Committee with its letter No- AMU/AEC/HS-FBH/2013/7 dated 24th July 2013.

The stomachs of rats were cut to collect the gastric contents. It were then measured and centrifuged at 1109 RCF for ten minutes. This was done to remove solid debris that was present in the gastric contents. 1 ml of gastric juice that appears to be the supernatant was pipette and diluted in 10 ml of distilled water in 100 ml conical flask. Two drops of phenolphthalein were added and titrated with 0.1M sodium hydroxide until a permanent pink colour appears. The amount of alkali added was recorded and the acidity was calculated using the formula below 26.

The removed stomachs were opened along the greater curvature 27. It was then washed with normal saline and observed using microscope for perforation and size and number of ulcers. The lesions were expressed in the terms of ulcer index (U.I) 28.

The stomachs were removed and fixed in neutral buffer formalin for 24 hrs. The tissues were processed using a tissue processor. The processed tissues were embedded in paraffin blocks and five µm thick sections were cut using a rotary microtome. The sections were stained using Haematoxylin and Eosin (H & E) Stain and Trichrome Stain using routine procedure. The slides were examined for any changes using a microscope 30.

The preliminary phytochemical screening on the seed of Parkia speciosa revealed the presence of phytoconstituents such as flavanoid, terpenoid and phenolic acid.

Data represent the mean ± S.D of observation from 6 rats.

b Significantly different from omeprazole group

a Significantly different from ulcer control group
Data represent the mean ± S.D of observation from 6 rats. 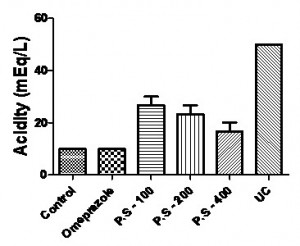 FIGURE 1: EFFECT OF EEPS AND OMEPRAZOLE PRE-TREATMENT ON ACIDITY OF GASTRIC JUICE

b Significantly different from omeprazole group 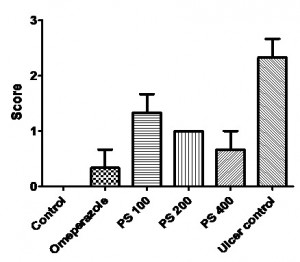 FIGURE 2: EFFECT OF EEPS AND OMEPRAZOLE PRE-TREATMENT ON SCORE OF LESION

Figure 3 shows the image of stomach tissue stained using haematoxylin and eosin. Figure A shows control group and Figure B shows the omeprazole group with normal stomach. Figure C, D and E were rats pre-treated with EEPS 100, 200 and 400 mg/kg respectively where the severity of damage decreases. Figure F was the ulcer control group which were pre-treated with Indomethacin where severe damage was seen. 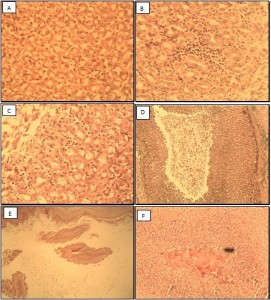 Figure 4 shows the image of stomach tissue stained using Trichrome Stain. Figure A shows control group and Figure B show omeprazole group. Figure C, D and E were rats pre-treated with EEPS 100, 200 and 400 mg/kg respectively, and F was the rats pre-treated with Indomethacin. The blue-greenish colour indicates the presence of collagen and higher amount of collagen indicates more damage to the stomach. 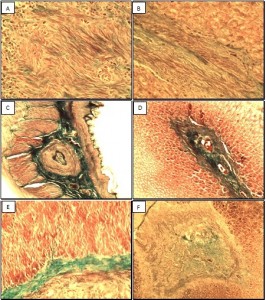 DISCUSSIONS: Usage of NSAID reported to be the major risk factor in the development of gastric ulcer. The mechanism that is suggested for the mucosal damage that is caused by NSAID is the inhibition of the proliferation of epithelial cell at the ulcer margin and inhibition of PG synthesis 31. PG plays a role in increasing mucus and bicarbonate secretion in the stomach 32.

Parkia speciosa have been also reported to contain terpenoids 33, alkaloid and flavanoid 34.  Flavanoid have been reported to show anti-ulcer properties 35 by reducing gastric secretion and peptic activity which prevents the formation of gastric ulcer 36.

Rats that were used in this study consist of female rats because female rats are sensitive to changes compared to male rats. The rats used are between 150-200 g because it is the standard weight in order to conduct the studies using rats 23. Albino rats are used as it is the most similar to the metabolism of Asian humans. Three parameters were used in this study that is the acidity of gastric juice, mucosal lesion and histopathological study. One way analysis of variance (ANOVA) was done using Bonferroni’s Multiple Comparison Test.

The third parameter is histolopathogical study where trichrome staining and H & E staining were done.  Trichrome stain is the method used to determine the amount of collagen that was present in the tissues. Collagen appears to be in Blue/greenish colour when it is stained using trichrome stain. Tissue from control group shows small amount of collagen, which are present in normal condition in the stomach. The amount of collagen present in the omeprazole group is very much less compared to ulcer control group and cells in the omeprazole group appear to be columnar cells in intact condition whereas rats from the ulcer group were having degenerative cells with pyknotic nucleus. Collagen amount were also seemed to be less in pre-treated group compared to ulcer control group. A cell from the pre-treated group appears to be intact and normal compared to cells from the ulcer group that were undergoing severe degeneration.

H and E stain is the method used to determine the amount of fibrosis present in tissues. The control group, Figure 3 (A) shows normal columnar cells with absence of fibrosis. The cells remain intact with no changes to the size and morphology of the nucleus.  Stomach of rat from omeprazole group, Figure 3 (B) showed the arrangement of intact cells with a small amount of lymphocyte which indicates inflammation. Tissues that were obtained from rats that were treated with low dose of Parkia speciosa extract that is 100 mg/kg, Figure 3 (C) showed degenerative tissue and the presence of lymphocyte which indicate presence of inflammation. Rats that were treated with 200 mg/kg of Parkia speciosa, Figure 3 (D) showed slight fibrosis with the presence of lymphocyte. Rats that were treated with 400 mg/kg, Figure 3 (E) showed normal columnar cells with the absence of nucleus disruption and slight fibrosis. However, tissue from the ulcer control group rat, Figure 3 (F) shows the presence of large amounts of lymphocyte which indicates severe inflammation and bleeding ulcer were also present in the tissue.

Mechanism of action of Parkia speciosa in protecting the mucosal layer of stomach has not been evaluated and this can be the future prospective of this study. Further studies can also be conducted to determine the active constituent that gives Parkia speciosa extract the anti-ulcer property.

The anti-ulcer activity of Parkia speciosa in evident from the studies conducted based on the evaluation of acidity of gastric juice, gastric mucosal lesion and histolopathogical study. The group of rats that were treated with Parkia speciosa extract showed significant reduction in the acidity of gastric juice and the length of lesion present in the stomach of rats. Among the entire test groups, PS 400 shows the least difference when it is compared to the standard drug, omeprazole in the entire test that was conducted.

Histolopathogical studies showed the presence of maximum intact cells in the pre-treated group compared to the ulcer control group. Further increases in the dose of Parkia speciosa extract could be beneficial in the reduction in the acidity of gastric juice and the length of the lesion in stomach. Therefore, the results were suggestive of anti-ulcerogenic activity of Parkia speciosa. Future prospective of the study is to identify the active components and mechanism of action of Parkia speciosa which is responsible for this anti-ulcer property.

ACKNOWLEDGEMENTS: Authors are thankful to chancellor and dean of the Asia Metropolitan University, Kuala Lumpur for their continuous support and guidance.