ABSTRACT: Peptic ulcer is the most common gastrointestinal disorder in clinical practice. A number of drugs including proton pump inhibitors and H2 receptor antagonists are available for the treatment of peptic ulcer, but these drugs has shown incidence of relapses, side effects, and drug interactions. Thus the development of new antiulcer drugs and the search for novel molecules has been extended to herbal drugs that offer better protection and decreased relapse. Medicinal plants provide an effective and safer way in disease management. Many medicinal plants exhibit antiulcer activity and found useful in the treatment of peptic ulcer. Physalis minima has shown anti-inflammatory and analgesic action in animals. In this present work, anti-ulcer effect of different extracts of Physalis minima was studied in NSAIDs induced ulcer model in albino rats. The extract at dose of 200,400 mg/kg produced significant inhibition of gastric lesion induced by NSAIDs induced ulcer. The extract reduced ulcerative lesion. The result obtained suggesting that extract possesses significant anti-ulcer activity.

INTRODUCTION:Peptic ulcer is an excoriated area of the gastric or duodenal mucosa caused by action of the gastric juice. It is a chronic and recurrent disease, and is the most predominant of the gastrointestinal diseases 1. It is generally recognized that peptic ulcer is caused by a lack of equilibrium between the gastric aggressive factors and the mucosal defensive factors 2. Gastric ulcer is among the most serious diseases in the world. It is a major health problem with multifactorial etiology. The development of gastric ulcer occurs with acid and the breakdown of mucosal defense

Peptic ulcer is a sore on the lining of the gastrointestinal tract caused due to mucosal erosions 4. It can be classified mainly into four types they are gastric, duodenal, esophageal and Meckel’s Diverticulum ulcers 5.

The predominant causes of peptic ulcer are infection with the bacterium called Helicobacter pylori (H. pylori) and the use of Non-Steroidal Anti-Inflammatory Drugs (NSAIDs) such as aspirin and ibuprofen 6.

Pepsin is the one of the proteolytic enzymes that is secreted along with hydrochloric acid in the stomach. These substances are essential for food digestion but at the same time have the ability to erode the cell linings of the digestive system if secreted in excess amount. The stomach defends itself from hydrochloric acid and pepsin by creating a mucus coating and producing bicarbonates.

H. pylori infection and NSAIDs can impair these protective functions. This makes the cell linings of the G.I. tract susceptible to hydrochloric acid and pepsin and leads to the formation of ulcer. H. pylori infection alone is the major causative factor (95% of the duodenal ulcer and 80% of gastric ulcers). Factors related with lifestyle such as smoking, alcohol, spicy foods and stress are also associated with peptic ulcer formation.

Different classes of drugs are used in the treatment of peptic ulcer but most of these drugs exhibit serious side effects like arrhythmias, gynaecomastia, impotence, arthralgia, hyper-gastrinemia and haemopoeitic changes 7. Alternative approach in recent days is the research of medicaments from Ayurvedic or traditional medicinal system.

The use of phytoconstituents as drug therapy to treat major ailments has proved to be clinically effective and less relatively toxic than the existing drugs and also reduces the offensive factors serving as a tool in the prevention of peptic ulcer 8.

In this modern era also, 75-80% of the world populations still use herbal medicine mainly in developing countries, for primary health care because of better cultural acceptability, better compatibility with the human body and lesser side effects. The chemical constituents present in the herbal medicine or plant are a part of the physiological functions of living flora and hence they are believed to have better compatibility with human body 9.

Physalis minima Linn.is commonly found on the bunds of the fields, wastelands, around the houses, on roadsides, etc., where the soil is porous and rich in organic matter.

It is an annual herbaceous plant having a very delicate stem and leaves. It is found growing in the sub-Himalayas up to altitudes of 1,650 meters. According to Duthie (1905), it also grows in Afghanistan, Baluchistan, tropical Africa, Australia, Ceylon, etc.10.

Plant material: The plants Physalis minima were obtained from Surrounding areas of atmakuru village Mangalagiri Mandal and Guntur Dist, Andhra Pradesh and authenticated by Dr. S. M. Khasim, Department of Botany, Acharya Nagarjuna University, guntur.Voucher specimen was deposited to herbarium of nirmala college of pharmacy After authentication, Fresh plants were collected, washed shade dried and then milled to a coarse powder by a mechanical grinder.

Preparation of Extract: The powder was packed into Soxhlet column and extract with alcohol, ethyl acetate and water. The extract was filter through a Whatman filter paper no. 1 and concentrated under reduced pressure. Just prior to use, the substance was dissolved in physiological saline solution.

Experimental Animal: Forty two adult healthy female Wister albino rats of weighting between 160 to 200gm were used for the study. The animals were house in standard condition (temperature 240±2 with 50 60% relative humidity and a 12 hours light dark cycle). The entire animal had free access to water and normal diet (Hindustan lever). The study was approved by Institutional Animal Ethical Committee (IAEC) and was in accordance with the guideline of the Committee for the Purpose of Control and Supervision of Experimental Animal (CPCSEA).

Method: Albino Wistar rats of either sex weighing between (150-200gms) were divided into seven groups of six animals in group

The animal in all the groups were kept for 24 h. fasting after that animal of all groups’ received aspirin (NSAIDs, 20mg/kg). The oral feeding of water and aspirin was continued for 3 days, the animal of II, III, IV, V, VI, VII were administered with omeprazole (20mg/kg), alcoholic extract (200mg/kg), alcoholic extract (400mg/kg) ethyl acetate extract (200mg/kg), ethyl acetate extract (400mg/kg) aqueous extract (200mg/kg), respectively after 3 h. of aspirin administration. On 4thday the animals were sacrificed, stomach were removed and cut along the greater curvature to measure the ulcer index 13.

U1 = Ulcer Index; UN = Average of number of ulcer per animal; US = Average of severity score; UP = Percentage of animal with ulcer; Mean ulcer score for each animal is expressed as ulcer index 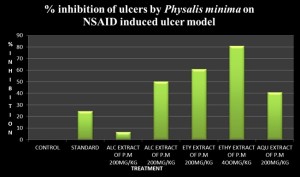 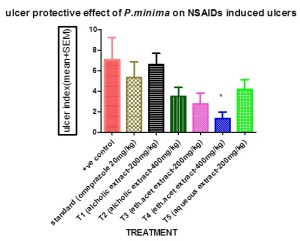 RESULT AND DISCUSSION: In the present study, different extracts of whole plant of Physalis minima were evaluated for its anti-ulcer activity against NSAIDs induced gastric ulcer model. The results of study are tabulated in Table 1. In NSAIDs induce ulcer model the ethyl acetate plant extract at dose of 200 and 400 mg/kg showed significant gastro protective activity 60.99% and 81.13% compared with standard drug omeprazole showed 24.7% (Table 1).

It was showing protection index at a dose of 200 and 400 mg/kg respectively compared with standard drugs omeprazole (graph 1) and percentage inhibition in ulcers was found 81.13% for ethyl acetate extract (graph 2). To conclude, the ethyl acetate extract of Physalis minima possesses anti-ulcer activity.

ACKNOWLEDGEMENT: The authors are thankful to the Principal and Management of Nirmala College of Pharmacy, Atmakuru, Mangalagiri, Guntur, Dist., Andhra Pradesh, India for providing necessary facilities to carry out the present research work.