INTRODUCTION: Areca nuts are the seeds of Areca catechu L, a feather palm 15-17m high which is cultivated in Sri Lanka, the Malay states, South China, East of India, Philippines islands and parts of East Africa, including Zanzibar and Tanzania 1. Areca nuts find its chief use as a masticator. Chewing the nuts is a popular habit enjoyed by nearly one tenth of the human population 2.

Arecanut extracts reduce the intracellular reactive oxygen species and release of myeloperoxidase by human polymorphonuclear leukocytes 3. While oral cancer had been a major health problem in the past 4, changes in habit patterns with betel chewing during the last decades have prompted a change in frequency of oral cancer in some countries 5. This study suggested that Areca catechu may have considerable therapeutic potential in the treatment of gastric diseases. The present study also provides biochemical evidence for the antiulcerogenic property of Areca catechu extract

Induction of Ulcers and their Scoring (Ulcer Index): Adult male wistar Rats weighing 120 g were used for the experiment. They were grouped into four groups of five animals each. All the animals were fasted for 18 hrs and deprived of water for 12 hrs, prior to the experiments. Gastric ulceration was induced by intragastric administration of absolute alcohol 6. Briefly, absolute ethanol (5 ml/kg) was administered intra gastrically to group II. Group III and IV were pretreated orally with freshly prepared Areca nut extract 30 min before with two different doses, 1g/kg.bwt and 2 g/kg.bwt respectively. A standard gastric antisecretory drug ranitidine (50mg/kg, Torrent Pharma ceuticals, Indrad, India) was given to group V 30 min before as positive control. Whereas, group I, the non-treated group received the vehicle (normal saline) alone.

Animals were killed by ether overdose 1h after administration of ethanol and stomachs were excised, opened along the greater curvature and washed gently with ice cold saline. The stomach weight and intraluminal bleeding was recorded for each group. The stomach was pinned flat on a wax board and observed with a hand lens (5X). The extent of erosion of stomach mucosa was assessed from a scoring system designed by Merazzi-Uberti and Turba 7. The results were expressed in terms of an ulcer index, which is the average severity of erosions per rat for each group, on the scale of 0-5.

Biochemical studies on Gastric Mucosa: The mucosa of the glandular stomach was removed by scraping with a blunt knife and a 10% homogenate was prepared. Level of Glutathione in the gastric mucosa was determined by Ellman’s reaction using 5’ 5’-dithio-bis-2-nitrobenzoic acid (DTNB) as described by Moron et al., 1979. The protein content of the gastric mucosa was quantified by the method of 8 with bovine serum albumin as the standard.

Histopathology: A portion of the stomach from each group was fixed in 10% Formalin. The Formalin fixed specimens were embedded in paraffin and sectioned (3-5 µ). Sections from each group were stained with haematoxylin and eosin and evaluated by light microscopy.

Present study showed that rat mucosa gastric injury induced by ethanol was significantly and dose dependently reduced by aqueous extract of Areca nut. Administration of absolute ethanol to fasted rats resulted in severe gastric damage visible from the outside of the stomach as thick reddish-black lines. After opening the stomach, lesions were found in the mucosa and consisted of elongated bands, 1-10 mm long, usually parallel to the long axis of the stomach. They were located mostly in the corpus (the portion of the stomach secreting acid and pepsin).

No gross lesions developed in the fore-stomach (the non-secretory part of the stomach).  Administration of absolute ethanol to vehicle treated rats resulted in 44% mortality and an increased stomach weight. Additionally, they had perforated ulcers and severe intraluminal bleeding. However, the mortality rate and increase in stomach weight induced by ethanol was reduced significantly by Areca nut extract administration. All animals treated with absolute ethanol caused intraluminal bleeding in the glandular portion of the stomach, while all animals in the Arecanut treated group (1 g/kg.bwt and 2g/kg.bwt) were protected from intraluminal bleeding.

Ethanol administration to vehicle treated rats produced gastric damage with an ulcer index of 4.4 and reduction in gastric mucosa GSH. However, Arecanut extract pretreatment reduced the ulcer index to 3.8 and 2.4 respectively and also reduced the depletion of GSH. The pattern of results of Areca nut extract 1 g/kg.bwt and 2g/kg.bwt were comparable to that of positive control included in the study.

Animals subjected to ethanol treatment developed considerable ulcers. However, there was no mortality and none of the animals developed intraluminal bleeding. Ethanol administration resulted in depletion of mucosal GSH and the ulcer score was 4.4. Areca nut extract pretreatment significantly reduced the ulcer score and the depletion in mucosa GSH. Ranitidine (50 mg/kg) pretreatment also offered protection. Areca nut extracts pretreatment offered protection against mucosa injury. The morphology of the stomach resembled that of normal. Histological analysis of ethanol treated rat stomach revealed the presence of necrotic debris in the lamina propria of the mucosa infiltered with polymorphonuclear leucocytes. The depth of the injury extended up to the muscularis mucosae with RBC extravasation. The submucosa of the corpus was markedly thickened by edema but devoid of polymorphonuclear leucocytes.

Histologically, the stomach of the Areca nutextract pretreated group showed superficial lesion in the mucosa and a moderate degree of submucosal oedema with neutrophilic infiltration in the submucosa. Ethanol administration to fasted rats resulted in superficial ulceration and mild erosion of gastric mucosa with necrotic patches. The Arecanutextract pretreated rat stomach resembles normal rat stomach with no submucosal edema and neutrophil infiltration. Alcohol treatment resulted in the mild erosion of gastric mucosa.

Anti-ulcer activity of Areca catechu: Ulcerative lesions of the gastrointestinal tract are one of the major side effects associated with the use of NSAIDs and alcohol. Several herbal drugs and Ayurvedic preparations have been shown to be protecting against drug-induced gastric mucosal injury. Arecanut extract demonstrated potent anti-ulcer activity, protecting rats from ulcerogenesis as manifested in ion and H significant reduction in the ulcer index as well as protection to the gastric H as oxygatalase, superoxide dismutase, glutathione-S-transferase and glutathione are present in oxygen handling cells which are the first line of cellular defense against injury, decomposing superoxide ion and H2O2; before they interact to form more reactive radicals 9.

Antioxidant enzymes such as Catalase, GSH, clearly confirm the antiulcer activity of Arecanutextract. Catalase is highly specific in its catalytic mode of action and it decreases the gastric mucosal damaging effect of aspirin 10. There have been investigations reported on Carica papaya and its gastroprotective effect by a free radical scavenging action 11. It is known that ethanol reduces the concentration of non-protein sulphydryl group in gastric mucosa. The gastric mucosa contains a high concentration of reduced glutathione, and agents that markedly reduce it cause severe gastric ulceration. The present study indicted that ethanol-induced erosion of the gastric mucosa occurs in parallel with a substantial reduction in the number of sulphydryl groups. Oral administration of Arecanutextract provided gastric cytoprotection and also prevented the reduction of gastric GSH (Fig. 1-8). 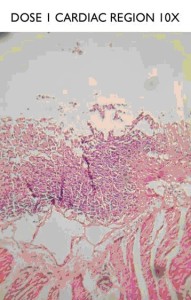 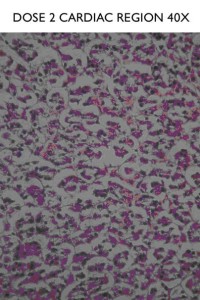 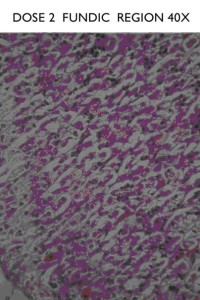 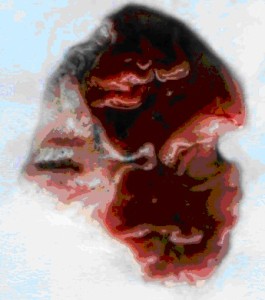 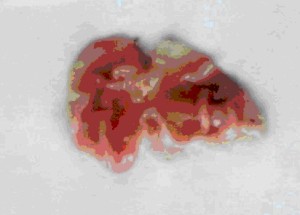 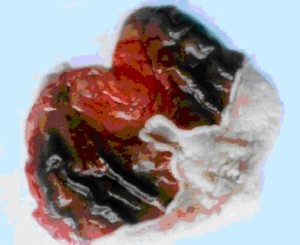 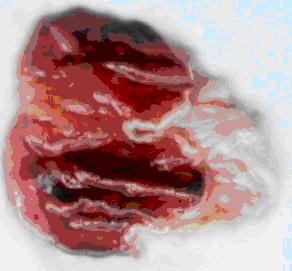 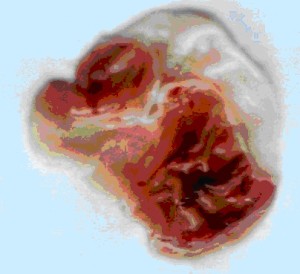 Ethanol Induced Gastric Ulcers: Ethanol induced gastric injury is associated with the significant production of free radicals leading to increased lipid peroxidation which causes damage to cell and cell membranes. Hence the antioxidant activity of Areca catechu may be one of the important defensive factors involved in its ulceroprotective effect. Initial event in disruption of the vascular endothelium resulted in edema formation and epithelial lifting 12.

Ethanol induced gastric lesion formation may be due to stasis in gastric blood flow, which contributes to the development of the hemorrhage and necrotic aspects of tissue injury. Non-steroidal anti-inflammatory drugs (NSAIDs) such as indomethacin irritate the gastrointestinal mucosa of both human and animals and may cause injury and bleeding. Histamine induced gastric ulceration is recognized to be mediated through both enhanced gastric acid secretion and the vasospastic action of histamine.

CONCLUSION: Ethanol and NSAIDs such as indomethacin injure gastrointestinal mucosa through oxygen- derived free radicals and scavenging of noxious free radicals may produce beneficial effects in preventing the initiation of tissue injury and subsequent ulceration. Arecanutextract has been shown to scavenge superoxide and hydroxyl radicals’ in vitro 13. Hydrolysable tannins purified from Arecanutextract induced a dose-related increase in oxidative free radical scavenging enzymes such as superoxide dismutase, catalase, and glutathione peroxidase and reduced lipid peroxidation in rat brain 14.

The tannins may bind to membrane proteins and protect the gastric mucosa from the damage caused by ulcer agents. In the present study, Arecanut extract produced significant anti-ulcer activity, which could be due to antioxidant activity and cytoprotection of gastric mucosa by tannins. Further investigations and clinical trials must be carried out to establish the anti-ulcerogenic effect of Areca catechu.