ABSTRACT: Aim of the present study was to evaluate the antianxiety and antidepressant activity of Valeriana pyrolaefolia, a member of family Valerianaceae. The antianxiety and antidepressant activities of dichloromethane extract were evaluated using the elevated plus-maze model and porsolt’s despair swim test. The studies were conducted on lacca mice, and the test materials were administered per oral route. The dichloromethane extract of V. pyrolaefolia roots exhibited significant dose-dependent antianxiety activity at 400 mg/kg. The results were comparable to the standard diazepam (2 mg/kg). The extract also exhibited significant antidepressant activity at 400 mg/kg dose. The results were comparable to the standard imipramine (10 mg/kg). The TLC fingerprint profile of the bioactive extract was developed using precoated TLC plates of 0.2 mm thickness. Valtrate was used as a bioactive marker for developing TLC fingerprint profile. The solvent system comprising dichloromethane: ethyl methyl ketone (8: 2) was used for developing the TLC profile. The TL chromatogram showed valtrate as a major component of the extract.

INTRODUCTION: Anxiety and depression are the most prevalent psychiatric disorders associated with diminished quality of life. According to the World Health report, the number of people suffering from anxiety and/or depression has increased by 50% in the past two decades. Recent studies have shown that anxiety and depression may occur together; anxiety may predispose depression or vice versa. Till date, benzodiazepines and selective serotonin reuptake inhibitors have been the most widely prescribed medication for anxiety and depression, respectively. However, their adverse effects are a matter of concern.

These considerations have lead researchers to investigate plants, in search of molecules which can combat anxiety and depression 1. Valerian is a common name given to crude drug consisting of the underground parts of Valeriana species (Fam. Valerianaceae).

Valerian is one of the top-selling herbs and is used as a sedative and anxiolytic. The genus Valeriana comprises 200 species distributed worldwide, and many of them are used medicinally. Hooker in 1882 reported 13 species from Indian subcontinent and Wealth of India mentions only three species, namely V. jatamansi, V. hardwickii and V. pyrolaefolia from India 2-6. V. pyrolaefolia Dcne. Is a sparingly pubescent herb with 5 to 25 cm long, erect, simple, succulent stem reported from Kashmir to Kumaon between an altitude of 3000 to 5000 m. The radical leaves are often 2 to 3 cm long, petiolated, orbicular or elliptic obtuse; cauline leaves sessile, ovate 0.8 to 1.5 cm long.

Flowers are white or tinged pink, in a terminal corymb, 2.5 to 5 cm. Thus, the objective of the present study was to evaluate the antianxiety and antidepressant activity of dichloromethane extract of V. pyrolaefolia.

Procurement of Plant Material: V. pyrolaefolia Decne. roots & rhizomes were collected from Gulmarg (Jammu & Kashmir). These were authenticated based on their taxonomic characters and by comparing with herbarium specimens available at the Forest Research Institute, Dehradun (Uttaranchal).  The voucher specimens of V. pyrolaefolia (accession number 1467) have been deposited in the Museum-cum-Herbarium of University Institute of Pharmaceutical Sciences, Panjab University, Chandigarh.

Preparation of Extracts: Coarsely powdered roots and rhizomes of V. pyrolaefolia were (100 g) were macerated (24 h) twice with DCM at room temperature. The extract was filtered, and the solvent was recovered using Eyela N 1100 rotary vacuum evaporator under reduced pressure. The dried extract was preserved in a vacuum desiccator containing anhydrous silica gel blue.

Experimental Animals: Lacca mice (20-30 g) of either sex, housed at Central Animal House, Panjab University, Chandigarh, were maintained in a 12 h light/dark cycle at a constant temperature of 25 ◦C. The mice were fed standard pellet diet (Ashirwad Industries, Mohali) and water ad libitum. The animals fasted for 18 h before the experiment. The animals were allocated to different experimental groups each of five mice. All the studies were performed as per the guidelines of the Institutional Ethical Committee of Panjab University, Chandigarh, India (No. 45/GO/ReBi/S/99/ CPCSEA).

Preparation of Doses: Carboxymethyl cellulose (0.5% w/v aqueous) containing 5% tween 80 was used as a vehicle for preparing the suspension of extract/standard drug. The vehicle alone served as control. Doses of various substances were prepared by suspending appropriate quantities in the vehicle to administer these to mice in a volume ranging from 0.20 to 0.30 mL, peroral route, using a tuberculin syringe fitted with an oral cannula.

Elevated Plus-Maze Model: Antianxiety activity was evaluated using the modified elevated plus-maze (EPM) 7, 8, 9. The apparatus comprising two open arms (16 × 5 cm) and two closed arms (16 × 5 × 12 cm) having an open roof, with the plus-maze elevated (25 cm) from the floor was used to evaluate antianxiety behavior in animals. During the entire experiment, mice were allowed to socialize. Every precaution was taken to ensure that no external stimuli, other than the height of the plus-maze, could invoke anxiety in mice. The dose administration schedule was so adjusted that each mouse was having its turn on the elevated plus-maze apparatus 60 minutes after the administration of diazepam (2 mg/kg), and test extract (100, 200 and 400 mg/kg).

Each mouse was placed at the center of EPM with its head facing towards the open arms. During the 5 min duration of the experiment, behavior of the mouse was recorded as (a) the number of entries into the open arms, (b) mean time spent by the mouse in each of the arms.

Forced Swim Test: Forced swimming test (FST) 10, 11 was used to evaluate antidepressant activity. Mice were forced to swim in a glass jar (25 cm × 12 cm × 25 cm) containing water to a height of 15 cm at room temperature (22 °C ± 1 °C). After an initial period of vigorous activity to escape, the animals assumed a typical immobile posture (ceased to struggle with minimal limb movements just sufficient to keep their head above the level of water). Mice were administered a single dose (100, 200, and 400 mg/kg) of the extract or the standard antidepressant imipramine (10 mg/kg, po) 60 min before the evaluation. Total immobility period during 6 min test session was noted.

TLC Fingerprint Profile: Precoated TLC plates of 0.2 mm thickness (Merck or Macherey-Nagel) and GR grade solvents (Merck Limited) were used for developing TLC chromatogram. Accurately weighed 1 g of coarsely powdered plant material was extracted with 25 mL dichloromethane at room temperature for 10 min. The dichloromethane extract was filtered and the solvent removed under reduced pressure.  The residue was re-dissolved in 2 mL dichloromethane and used for TLC.  Valtrate, a major valepotriate of valerian, was used as a marker for developing fingerprint profile. Of the several solvent systems tried, the solvent system comprising dichloromethane: ethyl methyl ketone (8: 2) was used for developing the TLC profile. The plate was then sprayed with hydrochloric acid - acetic acid mixture (8: 2) reagent and heated at 100°C for 2 min to visualize their number and position.

Statistical Analysis: The data have been expressed as the mean ± standard deviation of the mean. Significant differences among the groups were assessed using one-way analysis of variance (ANOVA). The test was followed by Tukey’s multiple range test, p values less than 0.05 were considered as significant.

Antianxiety Activity: Administration of diazepam (2 mg/kg) significantly increased the number of entries and the time spent in the open arms compared to the control group. The DCM extract of V. pyrolaefolia exhibited significant antianxiety activity at a dose of 400 mg/kg. Table 1 and Fig. 1 shows the results of the antianxiety activity. 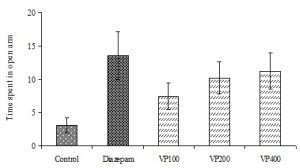 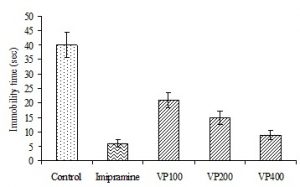 Antidepressant Activity: The DCM extract at a dose of 400 mg/kg demonstrated a statistically significant diminution of immobility time when the animals were subjected to FST Table 2 and Fig. 2. Results of imipramine (10 mg/kg) were similar to the results of those observed with the DCM extract.

DISCUSSION: The genus Valeriana has been used since time immemorial for treatment of various mental conditions. Various species have been investigated for their numerous biological effects, however, no significant reports about antianxiety and antidepressant activity of V. pyrolaefolia are available 12, 13. Thus, it was considered worthwhile to evaluate the antianxiety and antidepressant potential of V. pyrolaefolia roots.

DCM extract of V. pyrolaefolia roots & rhizomes was prepared as valepotriates, known for their numerous biological effects are soluble in DCM. The antianxiety and antidepressant activity was evaluated using the elevated plus maze (EPM) model and forced swim test (FST), respectively.

EPM is a well-established and most widely used animal model in contemporary preclinical research on anxiety. Fear due to height induces anxiety in the animals when placed on the EPM 12, 14. Antianxiety effect of the extract was compared with the standard antianxiety drug diazepam. The ultimate manifestation of anxiety and fear in the animals is exhibited by a decrease in the motor activity and preference to remain at a safer place (closed arm). Antianxiety agents are expected to increase the motor activity, which is measured by a number of entries and time spent by the animal in the open arm.

The FST has been used in preclinical tests to evaluate behavioral despair, i.e., a measure of failure to escape from an aversive stimulus. The forced swimming-induced immobility in animals is claimed to represent a condition similar to human depression, which can be reversed by antidepressant drugs.

The fingerprint profile of the plant was developed owing to the fact that it is one of the most basic, reliable, and important parameters for herbal drug standardization and quality control of the plant material. Valtrate, a major valepotriate of valerian, was used as a marker for developing fingerprint profile. An optimum resolution was obtained using dichloromethane: ethyl methyl ketone (8: 2). The presence of valtrate was confirmed in the TL chromatogram of the extract. Thus, the antianxiety and antidepressant activity of V. pyrolaefolia is attributable to the presence of valtrate as it is reported to be the anxiolytic principle of other species of valerian 14-17.

Thus, the present study confirms the antianxiety and antidepressant activity of dichloromethane extract of V. pyrolaefolia.

CONCLUSION: Present investigation reveals that dichloromethane extract of V. pyrolaefolia roots & rhizomes exhibits both anti-anxiety and anti-depressant activity, thus, validating their traditional use for the management of mental disorders.

ACKNOWLEDGEMENT: The financial support for this work by the University Grants Commission, New Delhi is gratefully acknowledged.