INTRODUCTION:Pyogenic infections are characterized by severe local inflammation, usually with pus formation. It’s an invasion by and multiplication of pathogenic microorganism in a bodily part or tissue, which may produce subsequent tissue injury and progress to overt disease through a variety of cellular or toxic mechanism, generally caused by one of the pyogenic bacteria.

Complications arising from cutaneous and soft tissue infections with S. aureus are a major clinical problem owing to the high incidence of these infections and the widespread emergence of antibiotic-resistant bacterial strains. Therefore leukocidins producing bacteria are usually referred to as pyogenic bacteria 2. Varieties of microorganisms that cause inflammation and suppuration are the pyogenic bacteria.

Pyogenic infections are still frequently seen in the developing countries and the treatment is a considerable challenge despite advances in microbiological techniques, antibiotics and surgical treatment. To ensure an adequate and efficient therapy, it is necessary to identify and treat the focus of inflammation 4. Pyogenic infections can be treated orally and topically.  Topical ointment, in many cases has shown itself to be as effective as oral therapy and less likely to be associated with unwanted effects.

The availability of two forms of therapy – oral and topical means treatment can be tailored according to the preference of the patient. In recent years drug therapy is more likely and appropriately used for the treatment. Evidences prove a shift from narrow to broad spectrum use of antibiotics towards microorganisms and their resistance to the site of infection. Such a shift enhances the activity of the drug and brings the use of the therapy towards the pyogenic infections more in practice.

This study was aimed to identify the bacteria isolated from the clinical pus samples obtained from the suspected patient with pyogenic infection and to detect the drugs of choice against the infection. Information regarding the drug susceptibility of the microorganism involved can be useful in the choice of an effective drug therapy.

Sample Collection: Pus sample were randomly collected from patients of People’s Dental College and Hospital and Gandhi Medical College and Hospital, Bhopal, using sterile cotton swab from the infection site and were transferred aseptically in test tubes containing normal saline. A total of 50 samples were accumulated for the study.

Isolation and identification of Microorganisms from clinical samples: The mixed samples were inoculated on Nutrient agar media under aseptical conditions and incubated for 24 hours at 37oC. The inoculums on the plates were streaked out for discrete colonies with a sterile wire loop following the standard procedures on differential media such as MacConkey agar, Eosin Methylene Blue agar, Mannitol salt agar, Blood agar, Chocolate agar etc. Figure 1 depicts the pure cultures of the microorganisms. Microscopic examination was done by various staining methods. 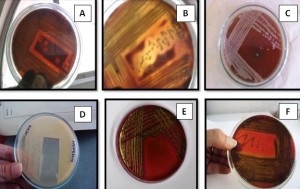 Confirmation of the isolated colonies was done by different biochemical tests, IMViC, catalase, coagulase, urease, oxidase and carbohydrate fermentation test.) The entire tests were carried out following the standard procedures.

The isolated microorganisms was inoculated and streaked aseptically on Muller-Hinton agar plates. The antibiotic discs of the different antibiotics for Gram positive and Gram negative were placed on them and incubated at 37°C for 18-24 hours. The plates were observed for standard zone sizes of inhibition for sensitivity/resistance against different antibiotics 6 (Figure 2). 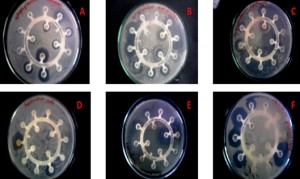 RESULTS: The bacterial strains identified, S. aureus was the commonest among all, followed by S. epidermidis, C. pyogenes, E. coli, P. aeruginosa and N. meningitidis. All the Gram positive bacteria were resistant to penicillin; maximum was shown by S. aureus (87.5%), S. epidermidis (85.7%) and C. pyogenes (80%). Certain other antibiotics also had resistant effect on the same microorganisms. The percent resistance of Gram positive bacteria towards penicillin, amoxicillin, ofloxacin, cefazolin, cefuroxime, erythromycin, chloramphenicol, ciprofloxacin, azithromycin and tetracycline is mentioned in Table 1.

The isolates of both Gram positive and Gram negative showed high degree of susceptibility to different drugs. In this study cefazolin, erythromycin, chloramphenicol, ciprofloxacin and azithromycin showed highest results. C. pyogenes (60%) showed maximum towards cefazolin, S. aureus (62.5%, 50% and 25%) towards azithromycin, erythromycin and ciprofloxacin and S. epidermidis (57.2%) towards chloramphenicol. Gram negative microorganisms too showed similar results towards norfloxacin, ofloxicin, cefuroxime, ciprofloxacin and ceftriaxone drugs. The highest susceptibility depicted towards ofloxacin was by P. aeruginosa (60%), N. meningitidis (50%, 50%, 50%, and 75%) gave the results for norfloxacin, cefuroxime, ciprofloxacin and ceftriaxone respectively (Figure 3 and Figure 4). 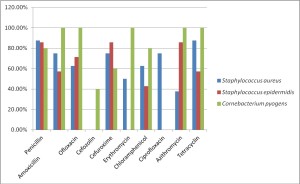 FIGURE 3: DETERMINATION OF SUSCEPTIBILITY OF GRAM POSITIVE BACTERIA AGAINST DIFFERENT ANTIBIOTICS. C. pyogenes is most susceptible towards Cefazolin, S. aureus towards erythromycin, ciprofloxacin, azithromycin and S. epidermidis towards chloramphenicol 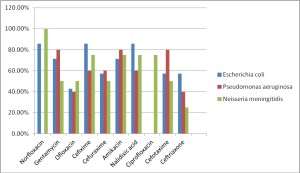 FIGURE 4: DETERMINATION OF SUSCEPTIBILITY OF GRAM NEGATIVE BACTERIA AGAINST DIFFERENT ANTIBIOTICS. P. aeruginosa is most susceptible towards ofloxicin, N. meningitidis towards norfloxacin, cefuraxime, ciprofloxacin and ceftriaxone.

DISCUSSION: Antibiotic resistance among pyogenic pathogens has been gradually rising, so it is important to have knowledge about the pattern and antimicrobial susceptibility to choose the correct treatment regimen. This study revealed the resistive and susceptible property of all the Gram-positive and Gram negative bacterial isolates towards the antibiotics, penicillin, amoxicillin, ofloxacin, cefazolin, cefuroxime, erythromycin, chloramphenicol, ciprofloxacin, azithromycin, tetracycline, norfloxacin, gentamycin, ofloxacin, cefixime, cefuroxime, nalidixic acid, ciprofloxacin, cefotaxime and ceftriaxone.

Identification of the causative microorganisms and its susceptibility to antimicrobials is important, so that proper drug is chosen to treat the patient in early stages7. All the β –lactam antibiotics and their generation antibiotics drugs kills bacteria by causing their cell walls to stop growing, so the cell dies8. It inhibits synthesis of the bacterial cell wall by interfering with the enzymes required for the synthesis of the peptidoglycan layer9. These antibiotics inhibit peptide chains formation, killing the cell. Amoxicillin inhibit cross- linkage between the linear peptidoglycan polymer chains that make-up the major component of cell wall. The results depicted in the study revels such effect on the microorganisms. Aztreonam inhibits muropeptide synthesis in the bacterial cell wall.

Different pyogenic infected sites trigger the production of neutrophil which engulf and kill the bacteria. Disease states of various degrees of severity generally result from local tissue injury, systemic dissemination with metastatic infection, or systemic effects of toxin production 11. The resistance and susceptibility of all the microorganism depends on its metabolic activities and enzymes.

S. aureus and P. aeruginosa is the most common causative organism in pyogenic infection. Most patients have a history of skin infection, gynecological infection, and respiratory tract infection. In vitrosusceptibility pattern to various antimicrobial agents record the current status of response of all the microorganisms to commonly used antibiotics 12 were resistant to penicillin and susceptible to amoxicillin.

CONCLUSION: Pyogenic infections are still frequently seen in the developing countries and the treatment is a considerable challenge despite advances in microbiological techniques, antibiotics and surgical treatment. To ensure an adequate and efficient therapy, it is necessary to identify and treat the focus of inflammation. Management of several pyogenic infections consists of aspiration or surgical drainage followed by appropriate antibiotics. Wound infections have been a problem in the field of surgery for a long time. Advances in control of infection have not completely eradicated this problem because of the development of drug resistance.

Drug resistance of pyogenic bacteria has been found to increase along with the frequency. This resistance can increase complications and costs associated with procedure and treatment.  Routine isolation, identification and susceptibility testing of bacteria present several difficulties leading to defects in the determination of local susceptibility patterns which will guide empirical treatment protocol. This study was carried out to identify the bacteria isolated from the clinical material pus obtained from the suspected patient with pyogenic infection and to detect the drugs of choice against several antibiotics.