ABSTRACT:Antibacterial and cytotoxic activities of the chloroform extract of the stem bark of Crataeva nurvala (Bengali name- Borun; Family- Capparidaceae) were studied.  Antibacterial activity was determined against two Gram positive (Bacillus cereus, Bacillus megaterium,) and four Gram negative (Escherichia coli, Shigella dysenteriae, Shigella sonnei, Shigella boydii) human pathogenic bacteria by disc diffusion method. The range of zone of inhibition of the extract was 8.3 to 22.1 mm. The extract showed no activity against Bacillus megaterium. Brine shrimp lethality bioassay method was used to determine the toxicity of the plant extract and ampicillin trihydrate was used as positive control. The LC50 values of standard ampicillin trihydrate and extract were 11.48 µg/ml and 14.12 μg/ml respectively. In addition serial dilution technique was used to determine the minimum inhibitory concentration (MIC) of the plant extract. The MIC values were recorded 62.5 µg/ml against both Escherichia coli and Bacillus cereus.

INTRODUCTION:The frequency of life threatening infections caused by pathogenic micro-organisms has increased worldwide and is becoming an important cause of morbidity and mortality in immuno-compromised patients in developing countries 1. Although huge number of antimicrobial agents has been discovered, the pathogenic micro-organisms are developing resistance against these agents day by day. In third world countries irrational use of antimicrobial agents is the major cause of such resistance.

In recent year, attempts have been made to investigate the indigenous drugs against infectious diseases 2. Research in the field of indigenous plants is a significant aspect of developing safer antimicrobial principles through isolation, characterization, identification and biological studies.

The plant Crataeva nurvala belonging to the family Capparidaceae is a leafy small to medium sized soft wooded tree with fragrant white flowers and oblong to rounded hard fruits, grows on the banks of canals, rivers, lakes etc. It is an evergreen tree growing widely in all parts of Bangladesh, Pakistan, India, Philippine, South America, China, Africa etc 3-5. The bark of the tree is an important drug for problem affecting the kidneys and bladder.

It is especially effective in the urinary complaints, kidney and bladder stones (inhibit the formation of stones), fever, vomiting and gastric irritation. It also acts as contraceptive and oxytocic; juice of the bark is given to women after childbirth. Barks are also laxative and lithontriptic. They increase appetite and billiary secretion 4-5.

Plant Material: The stem bark of the plant Crataeva nurvala were collected from Natore district of Bangladesh in the month of December 2006 and identified by Mahbubur Rahman, Assistant Professor Department of Botany, University of Rajshahi, Rajshahi, Bangladesh and its voucher specimen has been deposited in the Herbarium of the same department  (Voucher No. 24.11.12, 1965). The stem bark were cut, air dried for several days and then oven dried for 24 hours below the temperature 60oC. The bark was then pulverized into coarse powder using a grinding machine.

Plant Material Extraction and Separation: The powered dried stem bark (1.26 kg) was subjected to cold rectified spirit (4.5 L) extraction in flat bottom glass container through occasional shaking and stirring for 10 days 6-7. The whole extract was filtered and the solvent was evaporated to dryness in vacuum with rotary evaporator at 40oC to 50oC to afford a semisolid mass (70 gm). This was then diluted with water and fractionated with petroleum ether to remove the fatty matter. The aqueous layer was then extracted with chloroform (thrice). Then, the organic layer was dried and the solvent was evaporated off under reduced pressure to afford the chloroform extract as blackish residue (10 gm).

Antibacterial Screening: In vitro antibacterial screening was carried out by disc diffusion method 3-5 which is a qualitative to semi quantitative test. Solution of known concentration of the test sample was made by dissolving measured amount of sample in calculated volume of solvent. Filter paper discs (5 mm in diameter) impregnated with various concentrations of plant extracts were placed on test organism seeded plates. Chloroform was used to dissolve the extract and was completely evaporated before application on test organism seeded plates. Blank disc impregnated with solvent (chloroform) followed by drying off was used as a negative control. The activity was determined after 18 hours of incubation at 37oC. The diameters of zone of inhibition produced by the extract were then compared with the standard antibiotic amoxicillin 30 μg/disc.

Minimum Inhibitory Concentration (MIC): Serial dilution technique was used to determine MIC of the extract against Gram positive bacteria, Bacillus cereus and Gram negative bacteria, Escherichia coli 10. Inoculums were prepared in the sterile nutrient broth medium so that the suspension contains 106 cell/ml. The stock solution was prepared by dissolving four mg of the plant extract in 4 ml suitable solvent (e.g. DMSO) to obtain the concentration 1000 μg/ml. Twelve test tubes were taken, nine of which were marked as 1, 2, 3, 4, 5, 6, 7, 8, 9 and the rest three were assigned as CM (medium), CS (medium + sample) and CI (medium + inoculums). 1ml of sterile nutrient broth medium was added to each of the twelve test tubes and was sterilized in autoclave.

All the test tubes were incubated at 37.5oC for 18 hours and were checked for growth of the microorganisms. The MIC of the extract was taken as the lowest concentration that showed no growth of the microorganisms. Growths were observed in those test tubes where the concentration of the extract was below the inhibitory level and the broth medium was observed turbid.

Brine Shrimp Lethality Bioassay (Cytotoxicity Screening): The cytotoxicity assay was performed on brine shrimp nauplii using Mayer method 11-14. Here, simple zoological organism (Artemia salina leach) was used as convenient monitor for the screening. The eggs of the brine shrimp were collected from a local aquarium shop and hatched in artificial sea water (3.8% NaCl solution) for 48 hours to mature shrimp called nauplii. The test samples were prepared by dissolving the extract in DMSO (not more than 50 µl in 5 ml solution) and sea water (3.8% NaCl in water) to attain the concentration of 5 µg/ml, 10 µg/ml, 20 µg/ml, 40 µg/ml and 80 µg/ml.

Standard ampicillin trihydrate was used as a positive control and various concentrations as that of sample were prepared. A vial containing 50 µl DMSO diluted to 5 ml was used as a negative control. The matured shrimp (10 nauplii) were applied to each of all experimental vials and control vial. After 24 hours, the vials were inspected using a magnifying glass and the number of survived nauplii in each vial were counted. From these data the (%) mortality was calculated for each concentration of test and control solution. By using Microsoft Excel the concentration-mortality data were analyzed statistically.

RESULTS AND DISCUSSION: The chloroform extract of the stem bark of Crataeva nurvala was screened against six human pathogenic bacteria to check antibacterial activities by disc diffusion method (Table 1). In comparison to reference standard amoxicillin 30 µg/disc, the extract exhibited antibacterial activity at 500 µg/disc with the average zone of inhibition 10.6 to 22.1 mm. The plant extract showed highest activity against Shigella dysenteriae and lowest activity against Bacillus cereus. Bacillus megaterium showed no sensitivity to test material. The MIC values against Bacillus cereus and Escherichia coli were found to be 62.5 µg/ml against both of the organisms.

TABLE 1: ANTIBACTERIAL ACTIVITY OF THE CHLOROFORM EXTRACT OF THE STEM BARK OF CRATAEVA NURVALA

TABLE 2: EFFECT OF CHLOROFORM EXTRACT OF THE STEM BARK OF CRATAEVA NURVALA AND POSITIVE CONTROL AMPICILLIN TRIHYDRATE ON BRINE SHRIMP 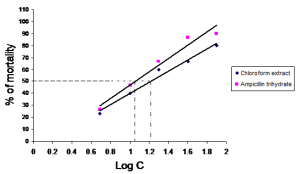 FIG. 1: PLOT OF LOG CONCENTRATION OF CHLOROFORM EXTRACT OF THE STEM BARK OF CRATAEVA NURVALA AND AMPICILLIN TRIHYDRATE VERSUS PERCENT OF SHRIMP MORTALITY AFTER 24 H OF EXPOSURE

The antimicrobial and cytotoxic activities of Crataeva nurvala have been investigated previously 17-18. In another study, the antioxidant activity of alcohol extract of stem bark of Crataeva nurvala has been studied 19. Their results have shown that the extract was effective in altering the indices of cisplatin-induced dysfunction of nephrons by decreasing the concentration of BUN, creatinine and lipid peroxide. Lupeol, a pentacyclic triterpene, isolated from stem bark of Crataeva nurvala has also been shown to exhibit significant hepatoprotective effect in rats 20. But, the cytotoxicity studies of the chloroform extract of the stem bark has not been reported yet.

CONCLUSION: Moderate antibacterial and cytotoxic activities exhibited by the chloroform crude extract of stem bark of Crataeva nurvala indicate that the extract can be used as a remedy against urinary tract infections caused by pathogenic bacteria. However, further studies are needed to identify the constituents responsible for such activities.

ACKNOWLEDGEMENT: The author wish to thank Assistant Professor Mahbubur Rahman, Department of Botany, University of Rajshahi, Rajshahi, Bangladesh for identification of the plant.