ABSTRACT: Cow urine therapy and all traditional practices from Indian systems of medicine have a strong scientific base. The cow has proved to be a boon in the areas of agriculture, science and technology, industry, energy, medicine etc for the development of any nation, in addition being eco-friendly in nature. In the present study the antibacterial potentials of cow urine were investigated. Total 14 pathogenic and non-pathogenic bacterial cultures were used as test organism against 10 different cow urine samples. The highest zone of inhibition was shown by sample G against P aeruginosa NCIM 2945 (1.8cm) while the smallest zone of inhibition was shown against E. coli NCIM 2065(0.3 cm) by sample A. Based on cumulative effect against the test organism, the urine sample G was found to be the most efficient inhibiting all the 14 test cultures. The antibacterial activity reported by sample G was comparable with standard antibiotics. A higher zone of inhibition was observed by sample G against P aeruginosa NCIM 2945 as compared to that of Gentamicin, Oxacillin and vancomycin. Though the urine sample G showed a strong antibacterial activity against all the test organisms, but the activity was reported low against the entire Gram positive bacteria compared to Gram negative bacteria. The presence of proline which is considered as a major amino acid in antimicrobial peptides was also observed in the urine sample G.

INTRODUCTION: It is widely accepted among clinicians, medical researchers, microbiologists and pharmacologists, that antibiotic resistance will, in the very near future, leave healthcare professionals without effective therapies for bacterial infections

As an example, it is now estimated that about half of all Staphylococcus aureus strains found in many medical institutions are resistant to antibiotics such as methicillin 1.

Presently we face a global public health crisis, as infectious diseases top the list for causes of death worldwide.

While it is likely that antibiotic resistance contributes significantly to this problem, data on consumption and resistance to antibiotics are limited for most countries 2and the relationship of resistance to morbidity and mortality is quantitatively unclear.

Cow, Bos indicus is a most valuable animal in all community. The cow urine is useful in number of disease particularly in gulma, filaria, cancer ets. It is also used with herbs to cure diseases like fever, epilepsy, anemia, abdominal pain, constipation, etc by the traditional healers 3 4. Immunomodulatory 5, hypoglycemic 6 and cardio-respiratory effects 7. Recently the cow urine has been granted U.S. Patents (No. 6,896,907 and 6,410,059) for its medicinal properties, particularly for its use along with antibiotics for the control of bacterial infection and fight against cancers. Medicinal usage of cow urine are extensively searched and scientifically endorsed 8.

In the Present study the antibacterial potentials of the cow urine have been investigated against 14 different pathogenic and nonpathogenic bacteria.

Quantitative estimation of Protein: The Folin Lowry method was a method of choice for estimation of protein. Aliquots of protein standard solution were pipetted out as into a series of tubes as 0.1, 0.2….1.0 ml and the total volume was made to 4 ml with distilled water. To each tube 5.5 ml of alkaline mix (reagent C) was pipetted out, mixed well and allowed to stand for 15 min, at room temperature. 0.5 ml of FC reagent was pipetted out into each tube, mixed thoroughly and kept in dark for 30 min. The blue color formed was measured at 650 nm against a proper blank. The same was conducted for the samples 10.

Disc Preparation: Paper disc of filter paper Whattman No. 1 were prepared. The discs were sterilized by autoclave at 121°C. After the sterilization the moisture discs were dried on hot air oven at 50°C. The sterile discs were kept in a presetrilized container until further use.

Disc diffusion assay: Antibacterial activity of urine samples against the test organisms was done by disc diffusion assay 11. Petri plate containing 15 ml of solidified nutrient agar was spread inoculated with 100 μl of 12 h old test bacterial cultures. Presterilized Whatman No.1 paper discs (6 mm) were saturated with 50 µl of urine and dried to be used in assays. The plates were kept at 4oC for 10 min before they were incubated at 37oC for 24 h. Anti-bacterial was assessed by measuring the diameter of growth inhibition zone around the discs. Sensitivity of test organisms was also checked against commercial discs (Hi Media, India) containing standard antibiotics.

Paper chromatography: The urine sample showing highest protein content and antibacterial activity was analyzed for the presence of amino acids using paper chromatography technique . A strip of wattman’s filter paper No. 1. was used, approximately 1 cm from one end of the length a line was drawn with the help of a pencil. At the centre of the line  a tiny spot of the sample was placed. The spot was allowed to dry and then placed in the chamber containing the saturated solvent system (Butanol : Acetic acid : Water, 4 : 1 : 5). The chromatogram was allowed to run upto ¾ th the paper and then taken out and dried in an oven and then spayed with locating reagent (Ninhydrine). The Rf value of the spot that appeared was calculated.

* Zone of inhibitions in centimeters, Values in the parenthesis is standard deviations, R- Resistant.

DISCUSSION: Commonly, antibiotics are widely as conservative treatment in various microbial infections and diseases 12. Considering the enormous quantity of antibiotics used, the situation should have been that there would be no infectious diseases. But, the fact is that the problems of infectious diseases are increasing day‐by‐day. Some of the major hindrances are that bacteria have genetic ability to transmit and acquire resistance towards the drugs 13 and there are also adverse effects of drugs on the host.14 Therefore to combat such problems many natural products have been explored. The nature is an almost infinite resource for drug development and discovery. It has endowed with a complete repository of remedies to cure all ailments of mankind, as it has always been a first rate drug store with enormous range of plants, micro organisms and animals.15

The ancient literature of cow urine has always focused on prevention of disease and maintaining the health and treatment of diseases. Cow urine acts like a magical potion for the treatment of the disease like cancer, asthma, chronic renal failure, hepatitis ABC, urological disorders, respiratory diseases and also plays its part as antimicrobial against disease like Eczema, Psoriasis, acne vulgaris, scabies and other various kinds of allergies. Urine contains volatile salts which are beneficial to the human body because these salts destroy acidity and get rid of pain in kidney, intestine, and womb; furthermore urine, a natural tonic, eliminates giddiness, tension in nerves, lazy feeling, hemicrama, paralysis, common cold, diseases of brain, nerves and joints.

In the present study the antibacterial potential of 10 different urine samples from cows at the MGM’s farm house was revealed. The variation in the color of the urine samples may be due to the amount and type of fodder consumed and the protein content in them. 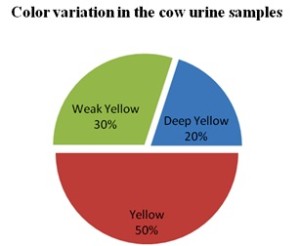 FIGURE 1: COLOR VARIATION IN THE 10 URINE SAMPLES TAKEN FROM COWS.

All the cow urine samples showed the presence of protein.  Vats and Kanupriya 17 has reported that the components of cow urine are responsible for showing antimicrobial activity. 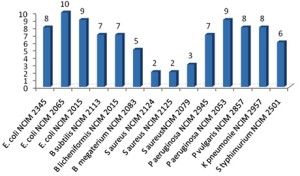 FIGURE 2: SENSITIVITY PATTERN OF THE TEST CULTURES AGAINST 10 URINE SAMPLES

A synergistic effect of Azadirachta indica andcow urine against some gram negative bacteria and yeast was observed by Vats and Miglan 17. Though all the urine samples showed the antibacterial activity, sample G was a promising candidate showing antibacterial activity against all given test organisms. 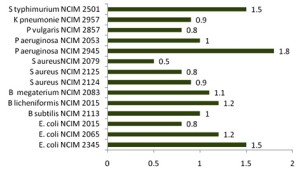 FIGURE 3: ZONE OF INHIBITION (in cm) RECORDED BY SAMPLE G AGAINST ALL THE 14 BACTERIAL CULTURES

A higher zone of inhibition was observed by sample G against P aeruginosa NCIM 2945 as compared to that of Gentamicin, Oxacillin and vancomycin. Though the urine sample G showed a strong antibacterial activity against all the test organisms, but the activity was reported low against all the S aureus cultures, specifically S aureus NCIM 2079, (0.5 cm).

The chromatography of the sample revealed the presence of proline. The amino acid proline is considered as a major amino acid in antimicrobial peptides 21.

CONCLUSION: The Antibacterial property of the cow urine was reveiled using biological assay. Total 10 urine samples were tested against 14 different strains of bacteria. The ability of the cow urine sample was more to inhibit the gram negative bacteria than that of gram positive bacteria. The highest zone of inhibition that was observed was 1.8cm by sample G. Thus sample G was the only one which has inhibited the growth of all the test organism and when compared with standard antibiotic proved to be more promising. The presence of amino acid proline in the sample G has proved its potential similar to peptide antibiotics.