INTRODUCTION: Medicinal plants are of great importance to the mankind and their value lies in chemical substances that are present in them.  Most of them are physiologically active substances with beneficial activities when utilized in adequate quantities.  In recent years, there has been growing concern in the usage of secondary metabolities or phytochemicals with pharmacological activities for the benefit of health and well being of human as well as animals.  Thus it is interesting to know that plant bioactive substances are sequence of medicinal agents and their antibacterial efficacy can also be used in the treatment of bacterial infections.

Considering the rich diversity of Indian medicinal plants it is expected that, the screening of plant extracts for antibacterial activity may be beneficial for human and plant diseases.

The screening of plant extracts and plant products for antimicrobial activity has shown that higher plants represent a potential source of new anti-infective agents. Infectious diseases account for high proportion of health problems in the developing countries 1. Resistance to antibiotics emerges in bacteria due to genetic mutations and consecutive selection of resistant mutants through selective pressure of antibiotics present in large amount in soil, plants, animals and humans 2. Problems with drug resistant micro organisms and side effects of modern drugs and emerging diseases where no medicines are available have stimulated renewed interest in plants as significant source of new medicines 3. Traditionally used medicinal plants produce a variety of compounds of known therapeutic properties. These substances that can inhibit pathogens and have little toxicity to host cells are considered candidates for developing new antimicrobial drugs 4.

There appears to be no evidence in the literature of the antibacterial activity of organic extracts (flower and seed) of T. cucumerina against gram-positive and gram negative bacteria though there are reports on leaf extracts. According to our literature survey no such investigations reported on the petroleum ether, chloroform and acetone extracts of leaf, stem, flower and seed of T. cucumerina against gram positive and gram negative bacteria.  Therefore, the findings here are the first report of antibacterial activity of these extracts.

The present investigation has been attempted to evaluate antibacterial activity of different solvent extracts of various parts of T. cucumerina   using some human pathogenic bacteria.

The following gram positive and gram negative pathogenic cultures of human and plants were used for testing the antibacterial activity of plant extracts.  These cultures were obtained from different sources listed below and maintained on their respective media.

The following cultures were obtained from Institute of Microbial Technology (IMTECH), Chandigarh and Department of Microbiology, Kakatiya University, Warangal (TS)

Media used for the assay:

The following growth medium is used to culture the microorganisms.Nutrient agar medium (for 1L):

A concentration of 250 mg/ml of each solvent extract of different plant parts was prepared in DMSO (which did not influence the microbial growth).

The plant material (stem, leaves, flowers and seeds) of T. cucumerina was collected from the research field, Department of Biotechnology, Kakatiya University, Warangal, Telangana State, India. The collected plant material was washed thoroughly with distilled water to remove the surface contaminants and then dried under room temperature for 30-45 days. Later finely powdered using an electric blender and stored in air tight containers for future use.

Preparation of the extracts:

The shade dried powder (25gm) was used for the extraction with 150 ml 80% methanol for 24 hours by Soxhlet equipment and filtered through 0.45 µm membrane filter. This filtrate was evaporated under reduced pressure and dried in a rotator evaporator at 55°C. Dried extracts were stored in screw cap bottles at -20°C and used as stock. Further, the same was diluted by using distilled water to arrive at different concentrations (1:1, 1:2 and 1:3). Fresh extracts were prepared for every third day.

By the standard method of inoculation 14 an inoculating loop was touched each of four or five well isolated colonies of the same morphological type and inoculum was inoculated into 5ml of nutrient broth.  The broth cultures were allowed to incubate at 37oC for 24 hrs until a slight visible turbidity appeared.  The turbidity of actively growing broth cultures was then adjusted with broth to obtain a half of MC Farland standard (1×108 to 5×108 cfu/ml). This was used as a starting inoculum for the assay.

The antimicrobial assay was carried out by agar well diffusion or agar cup plate method 15.

A standardized 1 to 2×104 cfu 0.5ml MC Farland standards was introduced onto the surface of sterile agar plate and evenly distributed the inoculum by using a sterile glass spreader.  Simultaneously 8 mm wells were cut from the plate using a sterile cork borer.50µl of extract at a concentration of 200 mg/ml was introduced into each well.  The agar plates were incubated aerobically at 37oC. After 24hrs, the inhibition zones were measured with a ruler and compared with the control well containing only DMSO and 10mg/ml of Streptomycin as standard.

All the tests were conducted in triplicates.  The data of all the parameters were analyzed.

The results obtained from the investigations showed that almost all the extracts exhibited considerable antibacterial activity against gram positive and negative bacteria.  The obtained data on stem, leaf, flower and seed are presented in Table 1 and in Fig. 1-4. 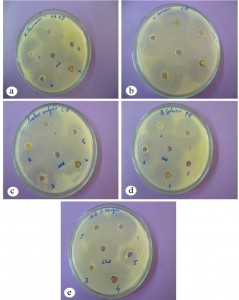 The petrolelum ether (PE) leaf extracts of T. cucumerina was found to be the most effective with maximum inhibition zone of 26mm against B.  Sphericus (Table 1), followed by methnaolic extract against Klebsiella pneumonia, Proteus valugaris, B. sphericus and Pseudomonas aeruginosa (Plate 2). Acetone extract had also shown effective on E. coli and S. typhimurium (Fig. 2).  Aqueous leaf extract had also shown effective against S. typhimurium and P. aeruginosa. 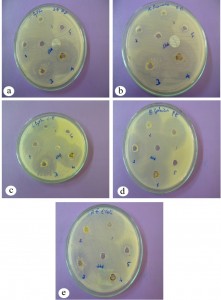 The results on antimicrobial activity of floral extracts of T. cucumerina are presented in Table-1 and shown in Fig. 3.  The petroleum ether and chloroform extracts had shown maximum zone of inhibition (25mm) against E. coli and S. aureus respectively (Plate 3).  The extracts with aqueous, methanol and acetone were found to be effective on P. aeruginosa, S. aruerus and P. aeruginosa respectively.  Least zone of inhibition was observed with aqueous extracts on B. cereus (Fig. 3). 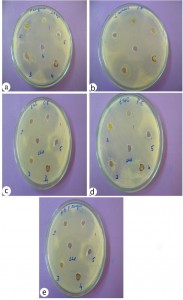 The results on various solvent extracts of seed of T. cucumerina on different pathogenic bacteria are presented in Table 1 and shown in Fig. 4.  The seed extracts of aqueous, methanolic and acetone had shown promising effect against M. luteus, 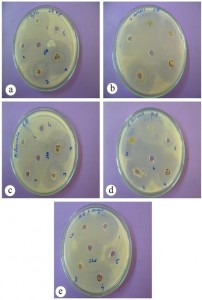 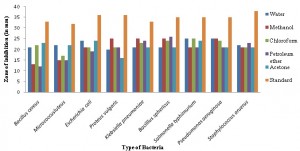 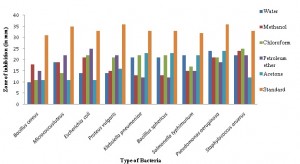 DISCUSSION: In the present investigation all the parts of T. cucumerina plant extracts were found effective on various microorganisms but it was dependent upon the plant part and as well as the solvent used (Table 1).  The extracts of seed with water, methanol and acetone had shown maximum effect on almost all the microorganisms tested. The seed extracts with the acetone as a solvent were found to the best against all pathogenic bacteria tested followed by methanolic extract of leaf.

Antibacterial activity of leaves and stem of Coccinia indica has been detected the significant activity in methanol and ethyl acetate extracts against different bacteria and providing support to the fact that methanol is a better solvent for extraction and isolation of phytochemicals having antimicrobial activity 7, 8.  According to our observations acetone extracts of seed showed more in T. cucumerina.

Sumathi and Pushpa 16 and Umadevi et al 17 reported the inefficiency of aqueous extracts towards the tested organisms.  Whereas in the present investigations, aqueous extracts of different parts of T. cuccumerina were found effective against pathogenic bacteria used (Table-1).  The basis of varying degree of sensitivity of test organisms may be due to the intrinsic tolerance and the nature and combinations of phytocompounds present in the extracts4. Hexane, dichloromethane, ethyl acetate and ethanol extracts of leaf of Luffa operculata were investigated by Jagessar et al., 18 against S.aureus and E.coli which proved the ethanol and ethyl acetate extracts to be very effective.  Tomori et al.,19 reported that Lagenaria breviflora ethanol extract of fruit inhibited both gram positive (B. subtilis and S. aureus) and gram-negative bacteria (S. gallinarium, P. aeruginosa, K. pneumonia and E.coli).

Recently we have also reported on antifungal activity (chary et al., 2015). Among them, plant extracts of different parts of T. cucumerina.  The seed extracts were most significant with larger zones of inhibition and inhibiting a broad spectrum of fungi (Penicillum spp, Fusarium chlmydosporum A.  flavus,  A.  terreus,  A. fumigatus and Curvularia lunata) followed by remaining extracts.

The present investigations have revealed the presence of antimicrobial activity of different solvent extracts of stem, leaf, flower and seed of wild endangered species T. cucumerina.  The species T. cucumerina extracts exhibited antibacterial ctivity against both gram (+) ve bacterial strains such as B. cereus, B. sphericus, M. luteus, and gram(-) ve bacterial strains such as E. coli, P. vulgaris, K. pneumonia, S. typhimurium and P. eruginosa, indicating the presence of a broad spectrum of antibacterial compounds present in the plant.

CONCLUSION: Thus, it is evident from our findings that the phytochemicals / bioactive compounds present in the stem, leaf, flower and seeds of T. cucumerina can be used not only as antifungal but also as antibacterial and also therapeutic agents to cure many diseases. Before drawing any concentration further work can be carried out in T. cucumerina on these lines.