ANTIBACTERIAL ACTIVITY OF ETHANOLIC EXTRACT OF THE LEAVES OF TURNERA ULMIFOLIA LINN.

ANTIBACTERIAL ACTIVITY OF ETHANOLIC EXTRACT OF THE LEAVES OF TURNERA ULMIFOLIA LINN.

ABSTRACT:Turnera ulmifolia Linn. belonging to family Turneraceae was investigated to evaluate in-vitro antibacterial activity of ethanol extract  of the leaves against gram negative bacteria such as Salmonella typhi, Pseudomonas fluorescens, Pseudomonas aeruginosa and Escherichia coli.  The pathogens were tested by disc diffusion assay method and minimum inhibitory concentration was evaluated. An attempt has been made to compare the activity of extract with standard ciprofloxin. The pathogens were used in the study was showed potential activity of the ethanolic extract of the plant.  Maximum activity was seen in case of Pseudomonas fluorescens where the zone diameter was 32 mm (300μg/ml).

INTRODUCTION: Medicinal plants are used to treat various infectious diseases. Many plants used today were known to people of ancient cultures throughout the world and they were valued for their preservative and medicinal powers 1. Over the past few decades there has been much interest in natural materials as sources of new antibacterial agents. Different extracts from traditional medicinal plants have been tested. Many reports show the effectiveness of traditional herbs against microorganisms as a result, plants have become one of the bases of modern medicine 2. Plants have given the Western pharmacopoeia about 7,000 different pharmaceutically important compounds and a number of top-selling drugs of modern times, such as quinine, artemisinin, shikonin and camptothecin 3.

Turnera ulmifolia Linn. or ‘chanana’, syn. Turnera angustifolia (Mill.) (Turneraceae) is a small herb of wide-ranging geographic distribution from Guyana to the North Eastern region of Brazil 4 and also west Bengal, Orissa and in the Peninsular India, particularly on the coast, where it is considered a weed 5. It is a wild weed, woody herb that grows 1-2 m high and bears aromatic, serrate leaves that are 10-25 cm long. Small yellow flowers bloom in early to late summer which is followed by small fruits with a sweet smell and fig-like flavor. The medicinal part of the plant is its leaves, which are harvested during the flowering season. Some species of Turnera are widely used in folk medicine for different types of inflammatory diseases. It have the more medicinal value, being used popularly as an anti-inflammatory, as an expectorant and in the treatment of albuminuria, leukorrhea, furunculosis, asthma and rheumatism. It is also prescribed in indigestion, biliousness, dysentery, chest ailments 5, 6, 7, 8.

Collection and extraction of plant materials: The leaves of Turnera ulmifolia was collected from Chennai and identified with the help of botanist of RRIUM, Chennai. The dried and powdered plant material (100 g) was extracted successively with 600 ml of water and ethanol with a Soxhlet extractor for 48 hr at temperature not exceeding the boiling point of the solvent 10. The extracts were filtered through Whatman No. 1 filter paper and then concentrated in a vacuum at 40°C using a rotary evaporator. Each extract was transferred to glass vials and kept at 4°C before use.

Disc Diffusion Method: The testing of antibacterial activity of the plant extracts was carried out invitro by Kirby-Bauer disc diffusion technique 11, 12. Culture of bacteria was made on Muller Hinton agar plates. Sterile paper discs 5mm diameter (Himedia) were placed over the plate at an equidistant position. The discs were loaded with 10 μl of the drug at the concentration of 100 μl/ml, 150 μl/ml, 200 μl/ml, 250 μl/ml and 300 μl/ml. DMSO was used as solvent. Separate control disc was also included using the solvent. Ciprofloxacin was used as standard for comparison. The plates were incubated at 37°C for 24 hours. The microbial growth was determined by measuring the diameter of Zone of inhibition.

Minimum Inhibitory Concentration (MIC): Minimum inhibitory concentration (MIC) is the lowest concentration of an antimicrobial that will inhibit the visible growth of a microorganism after overnight incubation. The MIC is determined by agar dilution method 13. The test were performed  at four concentration 60μg/ml, 70 μg/ml, 80 μg/ml, 90 μg/ml and 100μg/ml employing the ethanolic extract of the plant.

RESULTS AND DISCUSSION: The antibacterial activity of ethanolic extract of leaves of Turnera ulmifolia Linn.against the four pathogenic bacteria Salmonella typhi, Pseudomonas fluorescens, Pseudomonas aeruginosa and Escherichia coli were assessed by zone of inhibition. The results were shown in table 1 and chart 1. 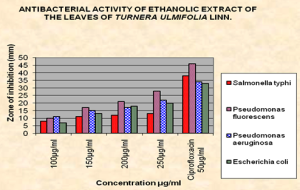 All the microbes used in the present study were sensitive to the ethanolic extract of the plant and showed a potential activity.  Maximum activity was seen in case of Pseudomonas fluorescens where the zone diameter was 32 mm (300μg/ml). The minimum inhibitory concentration study revealed that the value for the bacteria Salmonella typhi and Escherichia coli as 80 μg/ml and 60μg/ml for Pseudomonas fluorescens and Pseudomonas aeruginosa. This in-vitro study demonstrated that folk medicine can be as effective as modern medicine to combat pathogenic microorganism. The antibacterial activity of this plant would help for development of a new alternative medicine system which has no side effects.

CONCLUSION: This study serves as a baseline in identification of new medicinal plant and further investigation on the same may yield new compounds of medicinal importance for specific microbial disease.