ABSTRACT: Medicinal plants contribute in human health care system. Most of the plants utilized by village peoples as a folk medicine. The effects of plant extracts on bacteria have been studied by a very large number of researchers in different part of the world. In this study antimicrobial activity of Acalypha indica were investicated against two strains of Human pathogenic bacteria. A total of 15 pus samples were collected from Namakkal private hospital, among that two strains were isolated as Staphylococcus aureus and Pseudomonas aeruginosa. Isolation and identification of bacterial isolates by using standared biochemical tests.  The above isolated organisms were tested for their sensitivity towards the Acalypha indica medicinal plant leaves extract by disc diffusion and Agar well methods. In this study the highest antibacterial activity were observed in water extract of Acalypha indica than compared with acetone extract. Inhibitory effect of medicinal plant against Staphylococcus aureus in well diffusion is (17mm), and Psedomonas aeruginosa is (20mm) in water extract. In acetone extract 7mm, 9mm inhibitory zone showed by Staphylococcus aureus and Pseudomonas aeruginosa.

INTRODUCTION: Many medicinal plants have antimicrobial properties uses in traditional Indian system of medicine mostly in Ayurveda and Unani. Leaves are also uses for therapeutic purpose. It is being used as a source of medicinal agents for antibacterial, anti helminthic, astringent, emetic, febrifuge, sedative and stimulant. Natural products either as pure compounds or as standardized plant extracts provide unlimited opportunities for new drug; Antibiotics provide the main basis for the therapy of bacterial infections 1.

Different extracts from traditional medicinal plants have been tested; many reports show the effectiveness of traditional herbs against microorganisms as a result, plants have become one of the bases of modern medicine. Plants have given the western pharmacopoeia about 7,000 different pharmaceutical important compounds and a number of top-selling drugs of modern times, such as quinine, artemisinin, shikonin and camptothecin. In Homeopathy system, 70 percentof the medicines are prepared from plants.

As Homeopathy originated in Europe naturally, majority of the drugs prepared from plants are of exotic origin. The present trend in modern medicine is towards a change from the use of cellulose coated medicinal pills to extracts of plant supplied either in pure forms or in synthetic versions for curing many human ailments. Thus plants have provided the blue prints for the modern medicine 2, 3.

From over 3, 00,000 species of higher plants to occur in nature, only about 2 percent have been screened so for. Extract of plants from 157 families have been reported to be active against microorganisms. Plants are rich in alkaloids and other phytochemical contents and many of them are effectively used to cure a wide range of ailments. The alkaloids and phytochemical contents may be present in all organs of the plant including roots, stems, buds, leaves, flowers and fruits. Infectious diseases affect millions of people around the world and they are one of the main causes of death in History. This problem is exacerbated by emergence of multidrug-resistant microorganisms, especially Staphylococcus aureus and Pseudomonas aeruginosa present in hospital and community acquired infections, decreasing antibiotic therapy options. Due to increasing of resistance against several antimicrobial drugs, searching for new therapeutic alternatives using medicinal plants play an important role for obtaining new drugs 4, 5, 6.

Medicinal plants are part and parcel of human society to combat diseases, from the dawn of civilization. They usually contain many biological active ingredients and are used primarily for treating mild or chronic ailments. According to world health organization (WHO), about 80% of the world population relies chiefly on the plant based traditional medicine especially for their primary healthcare needs. Plant medicines are used on a worldwide scale to prevent and treat infectious diseases. Plants are rich in a wide variety of secondary metabolites such as tannins, alkaloids, terpenoids and flavonoids having been found in vitro since they have antimicrobial properties and may serve as an alternative, effective, cheep and safe antimicrobial for the treatment of microbial infections 7, 8, 9 .

Acalypha indica L. (family: euphorbiaceae) is a weed widely distributed throughout the plains of India. It has been reported to be useful in treating pneumoniae, asthma, rheumatism and several other ailments. The dried leaves of Acalypha indica is added to oil or lime and used to treat a variety of skin disorders. The leaves of Acalypha grandis have been reported to possess contraceptive activity. Several chemical and biological investigations have been carried out on this plant. In the present study, an attempt has been made to enrich the knowledge of antibacterial activity of Acalypha indica plant extract against gram positive and gram negative bacteria 10, 11. Acalypha indica is a common annual shrup in Indian gardens, backyards of houses and waste place throughout the plains of India.

Leaves possess laxative properties (a substitute of for senega) used in the form of powder or decoction. Acalypha indica cures diseases of the teeth and gums, burns, toxins of plant, wheezing, and neutrslizes predominance of the kabhafactor. Acalypha indica was chosen for this study to investigate the bacterial activity against pathogenic bacteria like Staphylococcus aureus and Pseudomonas aeruginosa which cause the most common cases of infectious diseases12. This work is an attempt to screen the antibacterial activity of plant leaf by disc and agar well diffusion method and the results suggest that Acetone and Water extracts can be used in the treatment of infection caused by these bacterial strains.

Collection of clinical samples: Pus samples were collected from the Government hospital at Namakkal from wound infected patients by using sterile cotton swabs. The swabs were immediately immersed into saline and transported to the laboratory.

Isolation of pathogenic bacteria: Pus samples were used to isolate the bacterium. The pus samples were collected aseptically and then streaked on Nutrient agar, Mannitol salt agar, Pseudomonas agar medium.

Collection of Medicinal Plant: The medicinal plant sample was collected from Namakkal district, Tamilnadu. The plant Acalypha indica leaves were selected for testing its antibacterial studies and characterization of secondary metabolites of effective ones.

Preparation of Plant Extracts: The plant Acalypha indica leaves were used for the preparation of extracts and it was collected from the leaves were too thoroughly with distilled water to remove extraneous matter and dried under shade. The dried leaves powdered using a motar and pestle. 20 gram of powdered leaves was extracted successively with 100ml of acetone and water in solvent extractor until the extract was clear. The extracts were evaporated to dryness and the resulting pasty form extracts were stored in a sterile plastic container.

Determination of the Antibacterial Activity:

Importance of Strains: Staphylococcus aureus is a gram positive which cause wound infection, food poisoning, pyogenic infection, pneumonia and toxic shock, Pseudomonas aeruginosa is a common bacterium which can cause disease in animals and humans. It is found in soil, water, skin flora and most man-made environments throughout the world.

Antibacterial activity by Disc diffusion method: Antimicrobial assay was carried out by disc and well diffusion technique.  The plant extracts were tested against Staphylococcus aureus and Pseudomonas aeruginosa bacterial strains. The Muller Hinton Agar (MHA) medium was prepared; ph was adjusted and poured 20ml for per plate. After solidification, the culture was swabbed on the plates, than sterile filter paper discs (5mm) were saturated with different concentrations of the test compound, allowed to dry and introduced on the upper layer of the seeded agar plate. The sterile discs impregnated with methanol were used as control test discs were the aseptically applied to the surface of the agar medium. Then plates were incubated for 24 hours 37o C after incubation period the zone of inhibition was measured. A well was prepared in the plates with the help of a cork-borer (5mm).

Antibacterial activity by well diffusion method: For agar well diffusion method, 5mm size wells were cutted in cultural strain swabbed plates. Then, 5µl of plant extract (acetone, water plant extract) was added in the well by using micro pipette. Methanol added well considered as a control. Then plates were incubated at 37o C 24 hours. After incubation period the zone of inhibition was measured. A well was prepared in the plates with the help of a cork-borer (5mm).

RESULT AND DISCUSSION: Antibiotic resistance has become a global concern. There has been an increasing incidence of multiple resistances in human pathogenic microorganisms in recent years, largely due to indiscriminate use of commercial antimicrobial drugs commonly employed in the treatment of infectious diseases. This has forced scientists to search for new antimicrobial substances from various sources like the medicinal plants13.

Isolation and identification of bacteria: Totally 15 pus samples were collected from wound infected patients, among that two strains were isolated and identified as Staphylococcus aureus and pseudomonas aeruginosa based on preliminary  and biochemical tests. This isolates was confirmed on selective medium. Then the bacterial culture were maintained in nutrient agar slant and used for further studies Table 1.

The above results were compared and the isolated were identified with the help of the bergey’s manual of systemic bacteriology as follows. (1) Staphylococcus aureus and (2) Pseudomonas aeruginosa.

TABLE 2: DIAMETER OF ZONE OF INHIBITION OF EXTRACTS OF ACALYPHA INDICA AGAINST BACTERIA IN DISC DIFFUSION METHOD

the results revealed that the previous research of the evaluation of antibacterial activity of some Indian medicinal plants including Acalypha indica. The obtained aqueous extracts were tested against different bacterial pathogens. The aqueous extract of Acalypha indica shows 9mm inhibition zone to Escherichia coli and no zone were showed against Staphylococcus aureus, Salmonella typhi and Shigella flexneri. Alcoholic extracts of Acalypha indica shows 10mm inhibition zone towards Staphylococcus aureus and Salmonella typhi 15.

TABLE 3: DIAMETER OF ZONE OF INHIBITION OF EXTRACTS OF ACALYPHA INDICA AGAINST BACTERIA IN WELL DIFFUSION METHOD 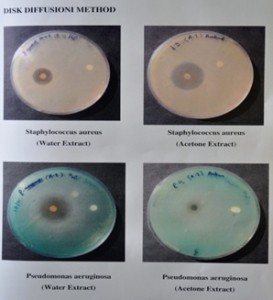 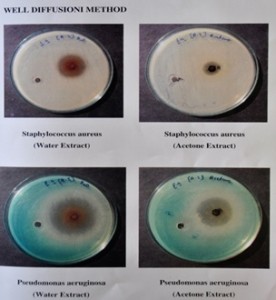 CONCLUSION: In this study the Acalypha indica plant was chosen. Because it is easily available one, and economical have medicinal values. The results evidenced that Acalypha indica is capable and best remedy to inhibit the growth of wound pathogenic bacteria with its copious source of secondary metabolites. This discovery leads to development of better treatment with herbal medicines to overcome the side effects caused by antibiotics. The screenings of antibacterial activity of medicinal plant has been proved highly effecting bioactive substances from the effective medicinal plant. The antibacterial activity of herbal plant

extract of Acalypha indica showed promising antibacterial activity against Staphylococcus auerus and Pseudomonas aeruginosa. This deserves more research. It can be hoped that the medicinal plant

will proved that the most valuable drugs against wound infection.