The methanol extract of Terminalia bellerica was more effective than crude extract against most of the microbes tested except E. coli (enteropathogen) and P. aeruginosa 2.   It has been reported that the ethanol and methanol extracts of Aloe vera gel showed higher activity while acetone extract, showed least or no activity against most of the tested pathogens 3. The antibacterial activity is exhibited by aqueous and organic extracts of Thymus capitatus L. (Lamiaceae) leaves and stems 4. The antimicrobial activity of diethyl ether extract of Cassia auriculata and Emblica fischeri showed better promising results in controlling the bacterial growth 5.

The petroleum ether extract of Digera muricata (L.) Mart. (Amaranthaceae) showed inhibition against V. cholera 6. The maximum inhibitory activity of Cassia auriculata flowers was observed against all organisms except Pseudomonas aeruginosa and Klebsiella pneumoniae 7. Organic solvent leaf extracts of Eucalyptus have great potential as antimicrobial agents in the treatment of infectious organisms 8.

The butanolic extract of Cyanodon dactylon is reported to be more active against most of the organisms tested 9. Methanol extract of Medicago sativa showed significant inhibitory activity against all the tested bacteria followed by chloroform and ethanol extracts 10. The different parts of the Borassus flabellifer are being used for medicinal properties viz. Male flowers are used for anti-inflammatory activity 11, the juice from flowering stalks used for diabetes 12. Oral feeding of mice with palmyrah flour induced the generation of T suppressor cells which were able to suppress the DTH response to SRBC13. The plant has been used in folklore.

Tender seed coat of Borassus flabellifer is removed and air dried then ground into powder which was dissolved in methanol so as to make 40% methanol extract. The extract is kept in orbital shaking incubator for 3 days and then centrifuged to remove the debris. Finally clear methanol extract was collected and then the solvent is removed by using rotavapour to get the dried powder of methanol dissolved components of the seed coat of the Borassus flabellifer. The dried powder appropriately dissolved in methanol and tested for antibacterial activity.

Antibacterial activity by Agar Well Diffusion Method: The bacteria were grown in Muller-Hinton media (HiMedia Pvt. Ltd., Mumbai, India) at 370C and maintained on nutrient agar slants at 40C and stored at -200C. Inoculum of test organisms was prepared by growing pure isolate in nutrient broth at 370C for overnight. The overnight broth cultures was sub-cultured in fresh nutrient broth and grown for 3hrs to obtain log phase culture. The agar plates were prepared by pour plate method using 20ml M-H medium. The sterile M-H agar medium is cooled to 450C and mixed thoroughly with 1ml of growth culture of concerned test organism (1 x 108 cells) and then poured into the sterile petri dishes and allowed to solidify. Wells of 6 mm size were made with sterile cork borer and test extracts were added. The agar plates were incubated at 37oC for 24hrs. The diameter of zones of inhibition was measured in mm using HiMedia zone reader 15.

Determination the MIC of the Methanol Extract by Broth Dilution Assay: The minimum inhibitory concentration of the methanol extract was determined using broth dilution assay16. The medium containing different concentrations of methanol extract of seed coat of Borassus flabellifer viz., 10, 1, 0.1, 0.01, 0.001 mg/ml prepared by serial dilution. After inoculation, the tubes were incubated for 24 hours at 37oC. The MIC of each sample was determined by measuring the optical density in the spectrophotometer at 620 nm and compared the result with those of the non-inoculated broth.

Inhibitory effect of Methanol Extract of Borassus flabellifer seed coat on Gram Negative Bacteria: The seed coat of Borassus flabellifer exhibited significant inhibitory activity against Gram negative bacteria such as Klebsiella pneumoniaee and Serratia marcescens, (Fig 2.) tested. The highest zone of inhibition (17mm for Klebsiella and 16mm for Serratia) was observed with 25mg for both bacteria tested. However, the inhibitory activity is not as significant as with Gram positive bacteria. 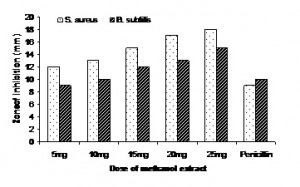 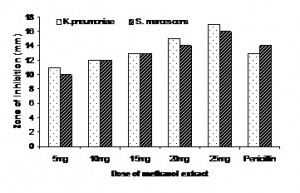 As shown in Table 1, the minimum concentration of extract required to inhibit the bacterial growth varies between 0.1 and 1.0 mg methanol extract. The lowest MIC was observed to be 0.1mg/ml with B. subtilis, while for S. aureus, K. pneumoniaee, and S. marcescens, the MIC was found to be 1.0 mg/ml (Table 1 & Fig 3.). This observation implies that the presence of potent antibacterial compounds in methanol extract of B. flabellifer.

Indicates the significance of inhibitory activity of methanolic extract of Borassus flabellifer seed coat on different bacterial species, as MIC ranged between 0.1 to 1 mg/ml 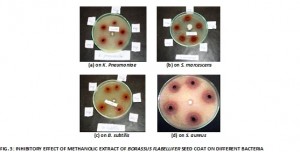 CONCLUSION: The above results confirm that the methanol extract of seed coat of Borassus flabellifer exhibit significant and consistent antibacterial activity with relatively lower MIC values indicating to undertake further fractionation analysis to isolate the antibacterial compound of therapeutic importance.

ACKNOWLEDGEMENT: The authors acknowledged the support from Department of Biochemistry, GITAM University for providing the necessary research facilities.