The potency of some Indonesian medicinal plants has been widely highlighted by several studies for their therapeutic effect as anti-inflammatory, anticancer, hepatoprotector, and antidiabetic. 8-11 Natural-based remedies have also been recently recommended to substitute the uses of fluoride and other chemical compounds addressed for oral health. Exhibiting good antimicrobial activity, Nigella sativa L. seed, known as black cumin, has been widely used as food preservatives. 12-13 Antimicrobial activity of N. sativa seed against various strains of Streptococcus has also been reported previously. 14-15

Anti-inflammatory, anticancer, antioxidant, immunomodulation, antiglycemic and hepatoprotective activities are some biological activities of N. sativa seed crude extract or essential oil that have been scientifically revealed, with thymoquinone as the main bioactive constituent.16-19

Bacterial strains and culture condition: Two strains of dental cariogenic bacteria belonging to Streptococcus genus were used in this study. Streptococcus mutans ATCC 35668 and Streptococcus sanguis ATCC 10556 were cultivated into brain heart infusion broth (BHIB) at 37 °C for 24 h prior to usage.

Antimicrobial activity evaluation: Preliminary evaluation of antimicrobial activity of DLBS1355 o/w emulsion was done by disk diffusion method according to the general guide from Clinical and Laboratory Standards Institute (CLSI) (2003). An approximately 106 CFU/ml of S. mutans and S. sanguis culture were respectively spread onto Mueller Hinton Agar, thereafter each sterile disk was added with 10 μl of DLBS1355 o/w emulsion, and then were placed on agar. All plates were then incubated at temperature of 37 °C for 48 h. Presence of clear zone around the disk was considered as inhibition zone and the diameter was measured.

Time kill assay: Time kill assay was assessed in broth medium as described in previous study21 with modification. Both S. mutans and S. sanguis were inoculated separately on BHIB and incubated for 5 h to obtain the log-phase culture (107-8 CFU/ml). DLBS1355 o/w emulsion was then added into the medium and incubated at temperature of 37 °C. The viable cells of S. mutans and S. sanguis were enumerated at 0, 15, 30, 75 and 120 min after treatment.

Inhibition of biofilm formation: The ability of the emulsion to inhibit the formation of bacterial biofilm was evaluated by method as described previously22 with minor modification. The biofilm formation inhibition assay was performed on 96-well microplate. S. mutans, S. sanguis and mixed culture of S. mutans and S. sanguis were respectively inoculated into BHIB that supplemented by glucose and o/w emulsion containing 0.5% N. sativa seed oil extract and incubated for 72 h. S. mutans and S. sanguis cultivated into BHIB without emulsion were determined as negative control. After incubation, the planktonic cells were discarded and biofilm formed on the bottom of the well was washed twice using sterile purified water. The biofilm was evaluated qualitatively by adding 0.01% crystal violet (v/v) for 30 min. The remaining crystal violet was discarded and washed twice with water.

Time kill assay: Time kill assay was performed at a 5-fold concentration of the highest MIC. Time kill assay of DLBS1355 o/w emulsion containing 0.5% N. sativa seed oil extract exhibited bactericidal effect against S. mutans (Fig. 1a) and S. sanguis (Fig. 1b). After 2 h of administration, the number of viable cells was reduced significantly. The bactericidal effect was found to be more effective against S. sanguis compared to S. mutans. Significant reductions on the number of viable cells were observed during the first 15 min for S. sanguis, and 75 min for S. mutans. 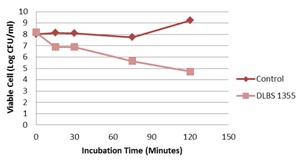 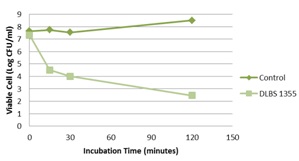 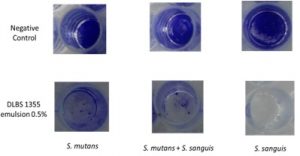 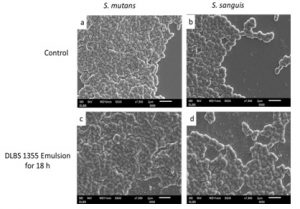 Scanning electron microscopy (SEM) analysis: The effect of DLBS1355 o/w emulsion on the cellular morphology of S. mutans and S. sanguis was examined using scanning electron microscope as shown in Fig. 3. After the growth of bacteria in DLBS1355 o/w emulsion-supplemented BHIB for 18 h, significant morphology alteration was found on S. mutans and S. sanguis (Fig. 3c-d). Cellular damages were clearly seen on the bacterial surface. The cell wall and cytoplasmic membrane disruption that were possibly caused by the emulsion activity allowed the cytoplasm and cellular constituents to be discharged from the cell.

The inhibition effect of N. sativa seed oil extract on biofilm formation of Gram positive bacteria was also reported previously with a concentration-dependent manner. 24 The fundamental enzymes involved on Streptococcus biofilm formation, glucosyltransferase and fructosyltransferase, were reported to be inhibited by synthetic antimicrobial agents and several essential oils of medicinal plants, including N. sativa. 36-40 Those compounds were also able to inhibit the adhesion of the Streptococcus cells and further affected the biofilm oxidative activity. 24, 41

Inhibition effect on bacterial growth together with cell adhesion and physiological activity leads to the inhibition of biofilm formation. Antagonism effects on biofilm formation were commonly found on some strains of Streptococcus genus.

A study mentioned that the formation of S. mutans biofilm was suppressed by the presence of S. oligofermentans. 42 In this study, the biofilm formed by S. mutans cultured together with S. sanguis was slightly inhibited compared to the biofilm from single culture of S. mutans (Fig. 2), which was similar to the result of the previous study. The most suggested bacteriostatic and bactericidal mechanisms of natural antimicrobial agents including N. sativa are related to the integrity and function of the cell wall and cytoplasmic membrane. Peptidoglycan layer damage and cell wall leakage caused by several medicinal plants active compounds leading to morphological changes on gram positive pathogenic bacteria were reported previously. 43-44

In this study, we also observed the significant morphological alteration on the cell growth of S. mutans and S. sanguis in DLBS1355 o/w emulsion-supplemented BHIB compared to untreated cells (Fig. 3). Supported by the results of previous studies mentioned above, the irregular apparent cell layer of S. mutans and S. sanguis observed in this study revealed the effect of DLBS1355 o/w emulsion on the structure and integrity of the bacterial cell wall. This cell wall structure-related effect may explain a higher antibacterial efficacy of our N. sativa seed oil extract on Gram positive bacteria than Gram negative bacteria. In addition, inhibition of cell wall synthesis gene expression was also reported to cell wall integrity, inhibition of ATP production and cell growth were as also reported due to the phenolic content of DLBS1355 45. Facing the multi-drug resistant pathogenic bacteria, discovery and development of new antimicrobial agents have already become a global concern.

This study highlighted the promising antimicrobial activity of N. sativa seed oil extract formulated in o/w emulsion against dental cariogenic bacteria and their biofilms, thus it could further be used for oral remedies to prevent and/or cure the common oral diseases. The antibacterial effect synergism of N. sativa seed essential oil with antibiotic was reported in several previous studies, therefore it may be used in combination with antibiotic. 28, 46 Further investigation is needed in order to investigate the cytotoxic effect of N. sativa seed o/w emulsion regarding to human use.

CONCLUSION: Based on the result of the present study, it can be concluded that N. sativa oil extract (DLBS1355) formulated in oil in water (o/w) emulsion possesses antimicrobial activity against dental cariogenic bacteria. It further showed the potential use of DLBS1355 o/w emulsion to prevent and/or cure the common oral diseases. Further study is needed to investigate its cytotoxicity regarding to human use.

ACKNOWLEDGEMENT: The author would like to thank to Edward Widjojokusumo for providing the emulsion, and Siswa Setyahadi and Isabela Anjani for critical review on this manuscript.

CONFLICT OF INTEREST: The authors declared no conflict of interest with respect to authorship and/or publication.