INTRODUCTION: In developing countries, Infectious diseases remain the main cause of high mortality rates recorded by WHO (1996) 1. Food infection and intoxification also considered as the most common causes of food borne diseases worldwide. Food borne pathogens causing these diseases find their way in foods through cross contamination, improper handling and temperature abuse. Staphylococcus aeureus and Escherichia coli are among the common food borne microorganisms that cause infection. Food spoilage microorganisms, on the other hand, cause products to lose their quality which renders them unacceptable to consumers. Short shelf life of food products because of spoilage is one of the major problems of food industry. Examples of food spoilage microorganisms are Bacillus subtilis and Pseudomonas aeurogenosa 2. The treatment of diseases is mainly based on use of antibiotics. In recent years, a number of antibiotics have lost their effectiveness due to development of resistant strains 3 mostly through the expression of resistant genes 4, 5. In addition to these problems, antibiotics are sometimes associated with adverse effect including hypersensitivity and allergic reactions 6.

Preservation of pathogenic and spoilage microorganisms in foods is usually achieved by using chemical preservatives. These chemical preservative acts as antimicrobial compounds which inhibit the growth of undesirable microorganisms. Some of chemical preservative have chemical toxicity and thus food manufacturer demanded to find alternative source of antimicrobial compounds 7, 8. Medicinal plants are also known to be used as food preservative due to its antimicrobial activity 9. Therefore, there is a need to develop alternative antimicrobial drugs for the treatment of infectious diseases but only few of them have studied chemically and biologically in order to identify their active constituents 10. In 1998 WHO estimated that 80 % of the people living in developing countries almost exclusively use traditional medicine. Most traditional medicine relies heavily on medicinal plants 11.

Simarouba glauca (Laxmitaru, Family- Simaroubaceae) is a flowering tree and show antimicrobial and insecticidal activity 12 (Joshi and Joshi, 2007). It also has been used as febrifuge, antidysentric, antiherpetic, antihelminthic 13 and antiprotozoal 14 activities.

Solvent Extraction: Thoroughly washed dried leaves and fresh leaves of S. glauca were powdered with the help of blender, 5 gm dried leaf powder was mixed in 100 ml of each methanol (DLM) and ethanol (DLE) respectively and 5 gm fresh leaf powder was mixed in 100 ml each methanol (FLM) and ethanol (FLE) respectively. The extraction was successfully done by Soxhlet extractor for 48 hrs. The solvent extracts were concentrated and reduced by rotary vacuum evaporator and preserved in air tight bottles at 5oC until further use.

Growth and Maintenance of Test Microorganisms: Bacterial culture of Bacillus subtilis, Escherichia coli, Pseudomonas aeurogenosa and Staphylococcus aeureus were obtain from National Chemical Laboratory (NCL), Pune. The bacterial culture were pre-cultured in nutrient broth overnight in a rotary shaker at 37oC and centrifuged at 10,000 RPM for 5 min. Further pellet was suspended in sterile double distilled water and cell density was standardized spectrophotometrically (A610nm) to obtain a final concentration of 105 cfu / ml.

Determination of Antimicrobial Assay: Antimicrobial activity of various extracts of S. glauca was evaluated by the well diffusion method on nutrient agar medium 15. The sterile nutrient agar medium (20 ml) in petri dishes was uniformly smeared using sterile cotton swab with tested pure culture of E. coli, B. Subtilis, P. aeroginosa and S. aureus. The wells of 5 mm diameter were made using sterile cork borer in each petri plates and various extracts of S. glauca were added, a blank well loaded without test compound was regarded as test control. For each treatment triplicates were maintained. The plates were incubated at 37oC for 24 hrs and zone of inhibition was measured by comparing control and standard antibiotics.

Determination of Minimum Inhibitory Concentration (MIC): The method used to determine the MIC was the agar dilution method of the European Society of Clinical Microbiology and Infectious Diseases (2000). Freeze dried extracts was dissolved in sterile distilled water in two fold dilutions from 100 to 204800 PPM. 1 ml of each extract dilutions were individually added to 19 ml Muller Huntingson Agar (MHA) and poured in petriplates giving final concentration from 5 to 10240 PPM. The final concentration was calculated from following equation.

Determination of Antibacterial Activity: Medicinal plants are important in Indian traditional medicine and most frequently used in Ayurveda. The ethanol and methanol extracts of dried and fresh leaves were recorded earlier by soxhlet apparatus. Among the extracts used dry leaves extracts (DLE) of Simarouba glauca was found to be averagely effective against Bacillus subtilis, Staphylococcus aeureus, Pseudomonas aeurogenosa, Escherischia coli. 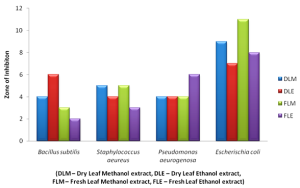 The results are in accordance with the finding in well diffusion assay. Jenie et al. (2001) 17 reported the same activity with extracts of Piper betle Linn. against S. aureus and E. coli. This result cannot be compared with the values obtained by the mentioned authors since different plant material, extraction process and MIC determination methods were used.

CONCLUSION: This study showed that crude ethanol and methanol extracts from medicinal plants could inhibit certain food borne spoilage and pathogenic microorganisms. Extract from fresh and dried leaves of S. glauca inhibited all test microorganisms with minimum inhibitory microorganism ranging from 160 to 10240 ppm. Results revealed that the extract can be used as source of natural antimicrobial compounds which can be applied to foods to prevent growth of undesirable microorganisms. In addition, with the advent of novel food preservation techniques, extract from fresh and dried leaves of S. glauca could prove useful in antimicrobial food packaging. Incorporation of the extract in food packaging materials and determination of its effect on the shelf-life of food products are some topics for further research.