ABSTRACT:In the present study, eight organic solvents and aqueous extracts of Canavalia mollis leaves were screened for their phytochemical composition, anti bacterial and free radical scavenging activities. Among the different extracts tested, ethanol, methanol and acetone extracts showed significant antimicrobial and radical scavenging activities. The most susceptible microorganisms were found to be Escherichia coli, Bacillus cereus, Bacillus subtilis, Staphylococcus aureus, and Streptococcus faecalis.  Preliminary phytochemical analysis of the leaf extracts revealed that the antibacterial and the radical scavenging activities are mainly due to the presence of the phenolic compounds especially alkaloids. The results obtained suggest that C. mollis could be exploited in the infections management of various diseases.

INTRODUCTION: Free- radical reactions have been implicated in the pathology of many human diseases/disease conditions like atherosclerosis, ischemic heart disease, aging process, aging process, inflammation, diabetes, immuno- suppression, neurodegenerative disease etc., 1-3. Radicals and other reactive oxygen species are formed constantly in the human body and are removed by the enzymatic and non-enzymatic antioxidant defense 4. The disturbance in ‘redox homeostasis’ occurring when antioxidant defenses are inadequate can damage lipids, proteins, carbohydrates and DNA. Drugs with multiple protective mechanisms, including antioxidant activity, may be one way of minimizing tissue injury 5.

In recent years, many studies evidenced that plants containing high content of antioxidant phytochemical can provide protection against various diseases 6. The free radical scavenging activity of these phytochemical is predominantly determined by their structures 7. The antioxidant and antimicrobial properties of various plants have been reported by several studies 8-10. In recent years the popularity of complementary medicine has increased. Dietary measures and traditional plant therapies as prescribed by ayurvedic and other indigenous systems of medicine are used commonly in India 11. The World Health Organization has also recommended the evaluation of the plants effective in conditions where safe modern drugs are lacking 12. Recently an intensive search for novel types of antioxidants has been carried out from numerous plant materials.

Canavalia mollis Wight and Arn. (Leguminosae), known as horse bean, native of Central America and West Indices has been widely cultivated in humid tropics of Africa and Asia. The prefix Cana refers to white while the suffix valia probably is derived from the term, valid meaning strong and true referring to its medicinal uses. The seeds have been reported to possess antihypercholesterolemic and hypoglycemic activities. The effect of aqueous extract of C. mollis seeds on hyperlipidemia and hyperketonemia in alloxan-induced diabetic rats proved it as active antidiabetic herb. The oral administration of aqueous extract of C. mollis seeds reduce urinary and blood glucose levels, and also elevated levels of triacylglycerol, ketone bodies and cholesterol associated with diabetes mellitus 13. Leaves are used to cure high fever and measles 14. The present study was undertaken to screen the phytochemical composition, antibacterial and radical scavenging activities of different solvent extracts of C. mollis leaves.

Processing of plant materials: The leaves were washed and air-dried over a period of two weeks. The dried samples were milled into fine power by pounding manually with a clean and sterile mortar and stored in sterile cellophane bags in a cool dry place till further use.

Extraction of plant materials: Dried ground leaves of 50grams were extracted in Soxhlet sequentially in 300ml of   ethanol, methanol, Chloroform, Hexane, Benzene, Dichloromethane, Petroleum ether, Acetone and Aqueous. The process was run for 48 hrs after which the sample was concentrated using rotary evaporator and freeze dried to powdered form. The dried extracts were weighed and kept in labeled sterile specimen bottles.

Preliminary phytochemical investigations: The major secondary metabolites classes such as Tannins, Saponins, Terpenoids, Steroids, Flavonoids, Alkaloids and Glycosides were screened according to the common phytochemical methods 15.

Overnight broth culture of the respective bacteria strains were adjusted to turbidity equivalent to 0.5 McFarland standards. (0.2 ml culture of the organisms was dispensed into 20 ml sterile nutrient broth and incubated for 24 hrs and standardized at 1.5×106 CFU/ml by adjusting the optical density to 0.1at 600nm PERKIN-ELMER UV- spectrophotometer) 16.

Disc Diffusion Method: The freeze dried extract was reconstituted with DMSO to obtain a stock solution of, 100 mg/ml, 50 mg/ml, 25 mg/ml, and 12.5 mg/ml. Nutrient agar (Hi Media Laboratories Pvt. Ltd. Mumbai) plates were swabbed using sterile cotton swabs with the adjusted broth culture of the respective bacterial strains. Discs of 6 mm were punched from Whatmann No.1 filter paper. Up to 10µl of each concentration of the extract were respectively introduced in the discs using sterile automatic pipettes. The discs were allowed to dry at room temperature for 2 hrs and were placed at equidistance in each of the plates using a sterile forceps. The plates were incubated to 37°C for 24hrs. The control antibiotic Kanamycin and streptomycin (30µg) (Hi Media Laboratories Pvt. Ltd. Mumbai) was used. Diameters of the inhibition zones were measured. The antibacterial activity was expressed as the mean zone of inhibition diameters (mm) produced by the plant extract.

Antioxidants assay with 1, 1- diphenyl- 2-picrylhydrazyl (DPPH) Radical: DPPH is a free radical which when dissolved in ethanol has a blue-violet color. When it reacts with the reducing agent, the solution loses color which depends upon the number of electrons taken up. Hence, the loss of color indicates radical scavenging activity of test material. DPPH was measured 17. Three ml of 60 µM DPPH in ethanol was added to 1 ml of C. mollis leaf extract and then incubated at room temperature for 15 minutes. Absorbance was read at 517 nm using a Genesys. 5- Spectrophotometer (Spectronic Instruments, Rochesternyl). The Antioxidant activity was calculated as inhibition (%) of DPPH radical formation.

Phytochemical analysis: Phytochemical analysis of various solvent extracts revealed the presence of alkaloids, tannins, Saponins, Steroids, Glycosides and flavonoids (Table 1). In particular, the ethanol and methanol extracts showed highly positive effects for the alkaloids but it was negative for chloroform and Benzene fraction. Saponin was detected only in the aqueous extract that was negative for the presence of tannins and steroids. Dichloromethane extracts showed only presence of alkaloids.

Antibacterial activity: The antibacterial activity of different solvent fractions of C. mollis extract was evaluated (Table 2; Fig 1). The C. mollis extract was screened for the activity against E. aerogenes (13.1 mm), E. coli (13.2mm), K. pneumoniae  (11.2mm), P. vulgaris (12.2mm), P. aeruginosa (12.3mm), S. paratyphi (12.4mm), V. cholerae (11.3mm), B. cereus (14.1mm), B. subtilis (13.3mm), S. aureus (14.1mm) and S. faecalis (14.4 mm)  by agar disc diffusion method. Results were compared with the drugs such as Streptomycin and Kanamycin. C. mollis extract at the concentration of 1000 µg/ml showed appreciable zone of activity against all the bacterial pathogens tested. Among the various solvent extracts of C. mollis, Ethanol, methanol and acetone fractions showed higher zone of inhibition against bacteria which are comparable to that of standard drugs. No appreciable zone of inhibition was observed with other solvent fractions.

Antioxidant Activity: The Antioxidant Activity reflected by the DPPH radical scavenging assay was clearly observed in various solvent extracts of plant (Table 3). Among the various solvent extracts of Canavalia mollis, ethanol had radical scavenging activity. Lower EC50 value indicates greater antioxidants activity. Only 40 mg/ml of Ethanol extracts was required to reduce the DPPH radicals by 50% whereas the acetone and methanol fraction needs 50mg/ml and 60mg/ml. This was significantly similar to the concentration needed for commercial antioxidants BHT. On the other hand, more than 100mg/ml was necessary for other extracts to achieve the same results.

TABLE 1: PHYTOCHEMICAL SCREENING OF EXTRACTS OF THE CANAVALIA MOLLIS LEAVES

Kanamycin and Streptomycin- Control antibiotics. Each value represents the mean of triplicate analysis. Standard deviation was ≤0.05 for the values

a- values are the mean of three replicates 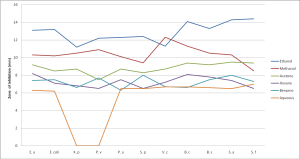 Discussion: Plant substances continue to serve as viable source of drugs for the world population and several plant-based drugs are in extensive clinical use for the past few decades, numbers of plants have been widely used for the treatment of various diseases due to their antioxidant properties 18. Antioxidants can be defined as compounds of lipids or other molecules by inhibiting the initiation or propagation of an oxidizing chain reaction and by many other mechanisms and thus prevent disease 19-20.

Results from our phytochemical analysis revealed that ethanol, methanol and acetone fractions showed the presence of antibacterial activities. Chloroform, Hexane, Benzene, Dichloromethane and Petroleum ether fraction did not show remarkable antimicrobial activity. In the present study, initial antibacterial screening of the different extracts from the leaves of C. mollis showed varying degrees of antibacterial activity against human pathogenic bacteria such as E. coli, B. cereus, B. subtilis, S. aureus  and S. faecalis.  The variation in the effectiveness depends upon the chemical composition of the extracts and membrane permeability of the microbes for the chemicals and their metabolism. It has been suggested that the antibacterial activity is mainly due to the presence of essential oil, flavonoids and triterpenoids and other natural polyphenolic compounds or free hydroxyl groups 21.

CONCLUSION: Based on the results described, we may conclude that the ethanol, methanol and acetone extract of Canavalia mollis posses significant free radical scavenging and antibacterial activities. We will conduct further research to isolate the antioxidant constituents of the plant with high activity which will pave the way for the production of bioactive prophylactic agents.