INTRODUCTION:Juniperus indica Bertolis an erect or procumbent tree 20 m high, with hard trunk and branchlets are densely arranged. Leaves are both scale like and needle like; needle like leaves usually present on young branches, apex acuminate; scale like leaves decussate, linear, apex obtuse. Fruit is fleshy berry, one seeded, brown then shining blue. It is distributed in Nepal (3700-4100 m) to Karakoram, Himalaya and W. China.

Nepal is rich in ethnobotanical information and there are many plants of therapeutic values used by various ethnic community and many studies have been carried out in this aspect. In the remote area of Nepal, plants have been a valuable source for maintaining human health with more intensive studies for natural therapies. Available data on biological activity of high altitude medicinal plant is limited, and this is the reason why they are often the first choice of researchers and pharmaceutical companies as precious ingredients.

Due to species climatic and geographical conditions, temperate and alpine plants of the Himalaya offer greater possibilities of having novel molecules and even largest quantities of the active compounds. Herbal drugs of mountain ecosystems, constituting only those traditional medicines which primarily use medicinal plant preparations for therapy, are in vogue in high altitude regions and offer great therapeutic promise. Therefore, the number of people and institutions seeking information on Himalayan medicinal plant is increasing very rapidly. During last decades, some studies have been carried out on antimicrobial properties of Nepalese medicinal plants to assess to their properties 3-7.

In continuation of our efforts to verify the efficacy of traditional medicine, we have reported the several medicinal plants from various geographical locations of Nepal based on the ethnopharmacological information 8-11. Thus, all these conditions were taken in account in order to conduct this research aimed to asses the antimicrobial and cytotoxic properties of Juniperus indica Bertol., which is abundantly used by local people of high altitude region of Nepal for medicinal purpose.

Plant Materials: Branches and twigs of the plant Juniperus indica were collected from 3000 m altitude of Gosainkunda in September, 2009. The collected plant materials were then dried in shade and stored at room temperature before the experiments.

Phytochemical Test: All the extracts of Juniperus indica Bertolwere screened for the presence of alkaloids, glycosides, tannins, saponins and flavonoids according to standard procedure 12.

Antimicrobial Assays: In this study, human pathogenic bacterial strains, Staphylococcus aureus, Escherichia coli and Klebsiella pneumoniae collected from Dhulikhel hospital, Kathmandu University teaching hospital, were used to investigate the antimicrobial potential of the extracts by cup plate method. The microorganisms were kept under refrigeration (4 °C) until use. Stock solutions of petroleum ether, ethyl acetate, and methanolic extracts were prepared in 1 % aqueous DMSO and then in RO water. The solution was then diluted to give final concentrations ranging from 4, 6 and 8 % w/v and nitrofurantoin discs were used as positive controls 13. The microorganism cultures were grown in Muller Hinton agar media. Each micro-organism, at a concentration of 1.5 × 106 cells/mL (adjusted to the 0.5 McFarland turbidity standards) was inoculated on the surface of respective media.

Diluted extracts were impregnated in 6 mm diameter cup plates, in triplicate of each. After holding the plates at room temperature for 1 h to allow diffusion of test samples into the agar, they were incubated at 37 oC for 24 hr. After that, the results were recorded by measuring the zones of growth inhibition around the cup-plates, and presented as the arithmetic average. Overall, cultured microorganisms with halos equal to or greater than 7 mm were considered susceptible to samples tested.

Cytotoxicity Assay: Extracts of Juniperus indica Bertolwere evaluated for lethality to brine shrimp larvae (A. salina Leach) according to the procedures described by Meyer et al. 14. Brine shrimp eggs were hatched for 48 h in a conical flask containing 300 mL of artificial seawater. The flasks were well aerated with the aid of an air pump and kept in a water bath at 29–30 °C. The extracts were dissolved in 1 % aqueous DMSO and then in sea water to obtain a concentration of 1,000 ppm, 750 ppm, 500 ppm, 250 ppm, 100 ppm and 10 ppm. An aliquot of each concentration (1 mL) was transferred, in triplicate, into clean sterile vials with pipette, and aerated seawater (9 mL) was added. Ten shrimp nauplii were transferred to each vial. Thymol 1% aqueous solution and 1% DMSO in seawater were used as positive and negative controls, respectively. After 24 h the numbers of survivors were counted and percentage of death calculated. The concentration that killed 50 % of the nauplii (LC50 in μg/mL) was determined. Criterion of toxicity for fractions was established according to Déciga-campos et al. 2007: LC50 values > 1000 μg/mL (non-toxic), ≥ 500 ≤ 1000 μg/mL (weak toxicity) and < 500 μg/mL (toxic) 15.

RESULTS AND DISCUSSION: Phytochemical screening of extracts obtained from Juniperus indica Bertolrevealed the presence of terpenoids, flavanoids and tannins as main phytochemical groups while saponins were weakly detected in most of the fractions. The percentage yield of extracts was calculated as 3.08 %, 6.62 % and 14.59 % for petroleum ether, ethyl acetate and methanolic extract respectively. Following the extraction of increasing polarity, highest yield was obtained in methanolic extract and least in petroleum ether extract indicating the presence of higher amount of polar compounds than non polar compounds in the plant.

Petroleum ether extract presented the highest activities with all microorganisms of interest. On the other hand, Staphylococcus aureus showed the relatively higher resistance with all type of extracts. Moreover, other extract, did not shown activity at 4 % but activity was gradually increased as increasing the concentration upto 8 % (Fig. 1). Since the terpenoids are generally recognized as safe and have been found to inhibit the growth of microorganisms 16, our extracts rich in terpenoids, showed similar results that may be either additive or synergistic effects of phytochemicals in extract. 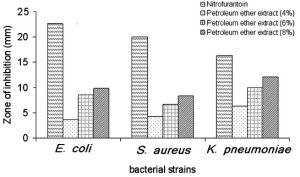 LC50 value for the methanolic, ethyl acetate, and petroleum ether extract was calculated at 550 µg/ml, 380 µg/ml and 140 µg/ml respectively. 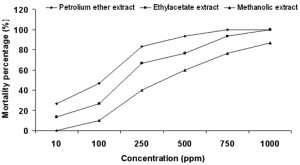 FIGURE 2: EFFECTS OF THE DIFFERENT FRACTIONS OF JUNIPERUS INDICA BERTOL ON THE VIABILITY OF BRINE SHRIMPS

Several studies have shown that brine shrimp assay has been an excellent method for preliminary investigations of toxicity, to screen medicinal plants popularly used for several purposes and for monitoring the isolation a great variety of biologically active compounds 17. In the course of this study, the brine shrimp lethality assay actually has proven to be a convenient system for monitoring biological activities.

None of the three extracts showed to have LC50 value less than 100 µg/ml and thus excluded them to use as anti-cancer agents. But high LC50 value also means that the extracts can be used in higher dose or concentration without any toxic effect to alleviate the different dieses in Ayurvedic or Amchi systems. Criterion of toxicity for fractions was established according to Déciga-campos et al.15.