ANTIBACTERIAL AND PHYTOCHEMICAL STUDIES ON THE LEAVES OF ADENOCALYMMA ALLIACEUM MIERS.

ANTIBACTERIAL AND PHYTOCHEMICAL STUDIES ON THE LEAVES OF ADENOCALYMMA ALLIACEUM MIERS.

ABSTRACT: Adenocalymma alliaceum is an important medicinal plant belongs to the family Bignoniaceae. The antibacterial and phytochemical studies on the leaves of this plant were carried out by using the disc diffusion method and Thin Layer Chromatography. The methanolic leaf extract showed a brown colored band on TLC plate with an Rf value 0.25 represents the presence of sulfide compound. The extract was tested against four bacterial strains, namely Enterobacter aerogenes, Salmonella enterica, Vibrio cholerae (gram positive) and Streptococcus haemolyticus (gram negative). The activity was determined by measuring the diameter of zone of inhibition in mm. The result obtained from the present study indicates that the methanolic leaf extract was active only against gram-positive bacteria. The maximum zone of inhibition was recorded in Salmonella enterica (12 mm).

INTRODUCTION: Adenocalymma alliaceum Miers. commonly known as garlic vine belongs to the family Bignoniaceae.  It is a very common plant used as a remedy for pain and inflammation of arthritis and rheumatism. The decoction or infusions of leaves are used for cold, flu, and fever. Infusion of the bark or leaf is used for rheumatism, arthritis, uterine disorders, inflammation, and epilepsy. Roots are used in the preparation of cold maceration and tincture and generally taken as a whole body tonic 1, 2. The crushed leaves smell like garlic, hence used as a substitute for garlic in food. This plant is also used as a mosquito repellent and an antiseptic too. The volatile constituents from the leaves of this plant were analyzed, and the major components identified are diallyl disulfides and diallyl trisulphide 3.

These types of sulfur-containing compounds are very common on both species of garlic and onion. Pharmacognostic and Phytochemical evaluation of aerial parts of this plant was also conducted. The results showed the presence of steroids, terpenoids, and flavonoids 4. Secondary metabolites from the leaves of Adenocalymma alliaceum and their inhibitory effect on microbial growth were characterized and found that methanol, ethanol, chloroform, and aqueous extracts were active against E. coli, Klebsiella pneumonia, Bacillus subtilis, Staphylococcus aureus, Streptococcus marceius, and Proteus vulgaris whereas, the aqueous extract was ineffective against Bacillus subtilis. Methanol extract exhibited maximum inhibition against all the tested bacteria 5. The present study was carried out to locate the phytochemical constituent of the leaves of A. alliaceum and also its antibacterial activity.

MATERIALS AND METHODS: The fresh leaves of Adenocalymma alliaceum were collected from the nearby localities of St. Dominic’s College, Kanjirapally.

The collected plant materials were botanically identified by using the Flora of the Presidency of Madras 6. The voucher specimens are deposited at the Department of Botany St. Dominic’s College Kanjirapally (Voucher specimen number SDC H-15). Fresh leaves were washed, shade dried and completely dried by keeping at 60 ºC in a hot air oven for 6 days. The dried materials were powdered with the mechanical grinder and stored in airtight polythene bags.

Antibacterial Assay: 20g of the powdered material was macerated in methanol for one week in a conical flask; the extract was then filtered through Whatman no.1 filter paper to obtain a clear extract. The methanolic leaf extract was tested against four different bacteria to determine the antimicrobial activity by disc diffusion method 7. The micro test organisms were seeded into Muller-Hinder medium by streak plate method. The filter paper discs were impregnated with extracts and placed on test organisms seeded plates. The bacterial test species such as Enterobacter aerogenes, Salmonella enterica, Vibrio cholera (Gram-positive) and Streptococcus haemolyticus (Gram-negative) were used for the antibacterial test. 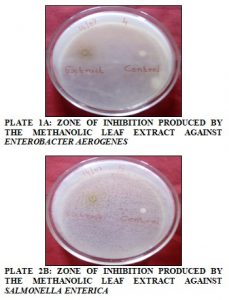 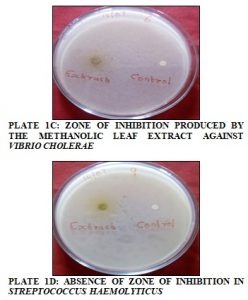 The solvent methanol was used as a control. The antibacterial assay plates were incubated at 42 ºC for 24 h. The activity expressed in terms of the zone of inhibition in mm. The photographs were taken and are represented in Plate 1A, 1B, 1C, and 1D.

Extraction of Sulphides: 20 g of fresh leaves were crushed and kept covered with 50ml 70% methanol for 30 min at room temperature with occasional shaking. The methanolic extract was filtered and concentrated. The concentrated extract is taken in a beaker; 5 ml of 2N HCl is added and heated in a water bath to dryness. The dry residue is extracted with solvent ether (diethyl ether), and the ether extract is concentrated and spotted on silica gel G plates.

The plates are developed in toluene: ethyl formate: formic acid (5:4:1). The chromatograms are dried at room temperature and sprayed with 1% iodine solution. This reagent was used to detect the bands on the TLC Plates. Sulfides become visible as brown bands 8, 9. The result obtained from the present study is represented on Plate 2. The movement of the active compound was expressed by its retention factor (Rf); the value was calculated by using the following formula:

Preparation of TLC Plates: TLC Plates can be prepared manually with the help of adhesive tape and a clean glass rod. The plates are cleaned thoroughly with water and later rinsed with acetone and dried. The glass plates of 10 × 20 cm are kept flat closely side by side over a uniformly flat surface and are fixed by two strips of adhesive tapes on both the upper and lower ends of the glass plates. The plates and the tape are then cleaned with a cotton plug containing acetone. The slurry of silica gel is prepared in water by the following way.

10 g silica gel is taken in a stoppered conical flask, 24 ml distilled water is added and shaken thoroughly for 30 sec and poured immediately onto the plates from top to bottom. The slurry is then spread over the plates by placing a clean glass rod crosswise and pushing the slurry from one side to the other and back. The plates are then allowed to dry in the air for about 20 min; the adhesive tapes are pulled out to the sides and transferred to the oven and kept at 110 ºC for 30 min. The plates are then taken out and stored in a cool, dry place 7→.

Antibacterial Activity: The effect of methanolic leaf extract of Adenocalymma alliaceum, on bacterial growth, was studied, and the results are shown in Table 1. 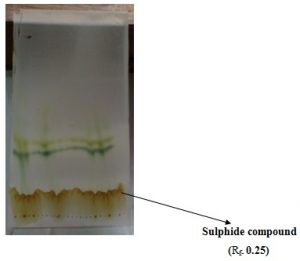 CONCLUSION: In the present study it can be concluded that leaves of Adenocalymma alliaceaum have richest source of bioactive compound sulfide which is active only against gram-positive bacteria. Further studies are recommended for the isolation, purification, and characterization of the bioactive principle of this drug plant.

ACKNOWLEDGEMENT: I am thankful to the head of the Department of Botany for providing me the facilities for the successful completion of the work.