Background: Gouania longipetala Hemsl. (Rhamnaceae), has ethnomedicinal use in the treatment of wounds, gonorrhoea, abdominal pain, lumbago, ophthalmia, conjunctivitis, and rickets. However, no scientific investigation of these effects has been established. Our aim was to verify the antibacterial, antioxidant and anti-inflammatory effects of the stem of Gouania longipetala.

Methods: The antibacterial effect of the 70% ethanolic extract was studied using the agar well diffusion and micro dilution assays. The extract was also tested in vitro for its free radical scavenging effect, total antioxidant capacity and total phenol content. The extract activity in acute inflammation was assessed using the carrageenan-induced foot oedema in chicks.

Conclusions: The results indicated that the extract possessed antibacterial, antioxidant and anti-inflammatory properties and may give credence to some of its ethnopharmacological uses.

INTRODUCTION:Infectious diseases, caused by bacteria, fungi, viruses and parasites, and inflammatory disorders continue to pose a public health threat particularly in developing countries. Africa’s biodiversity has the potential to be a major resource for developing innovative therapeutic agents. Medicinal plants especially, those used in ethnomedicine still play important roles in the management of various ailments including infectious diseases and inflammatory disorders.

Gouania longipetala Hemsl. (Rhamnaceae) is a scandent shrub or liane mainly present in closed-forests and jungle regrowths. In traditional medicine, it is used to treat various ailments such as venereal diseases, oliguria, gout, abdominal pain, lumbago, wounds and rickets. The leaf juices are used as drops or wash for sore eyes, conjunctivitis, iritis, opthalmia and trachoma 1. The leaf is used for dropsy, swellings, stomach troubles, as a genital stimulant/depressant, laxative, as a febrifuge and as an antidote for venomous stings, bites, etc 2.

Personal communication with some herbalists in the Ashanti Region, Ghana indicates the stem decoction is used for the treatment of various infectious ailments, skin disorders and as an analgesic. The plant is considered a general “cure-all”. However, no scientific investigation to the best of our knowledge of these effects has been established. Furthermore, some of the ailments mentioned are inflammatory and infectious in nature and accompanied with oxidative stress. Therefore, the present study aimed to verify the anti-inflammatory, antibacterial and antioxidant effects of the stem of the plant.

Plant material collection and extract preparation: Thestem of Gouania longipetala Hemsl. was collected in the Ashanti Region of Ghana in June 2009. A voucher specimen (No. KNUST/HM1/2010/S005) has been retained in the herbarium of the Department of Pharmacognosy, College of Health Sciences, Kwame Nkrumah University of Science and Technology. The dried and ground stem of Gouania longipetala (50 g) was soxhlet-extracted with 0.5 L 70% ethanol for 12 h.The extract was evaporated to a brown syrupy mass under reduced pressure in a rotary evaporator, air-dried and kept in a dessicator till required. The yield obtained was 11.4%w/w.

The test organisms were obtained from the University of Ghana Medical School.

Animals: The animals used in this study were one-day post-hatch cockerels (Gallus gallus; strain shaver 579). They were maintained in stainless steel cages at 29oC on a 12 hour light-dark cycle. Feed (Chick Mash, GAFCO, Ghana) and water were available ad libitum. Chicks were tested at 7 days of age. All studies were carried out by using 5 chicks in each group. All procedures and techniques used in these studies were in accordance with the National Institute of Health Guidelines for the Care and Use of Laboratory Animals (NIH, Department of Health and Human Services publication No.85-23, revised 1985) and were approved by the Ethics Committee of the Department of Pharmacology, KNUST.

Agar Well Diffusion Method: The antimicrobial activities of the different extracts were determined using the Vanden Berghe and Vlietnick agar well diffusion method 3. Inocula of the microorganisms were prepared from 24 h Mueller-Hinton broth cultures and suspensions were adjusted to 105 CFU/ml following a 0.5 McFarland turbidity standard. Wells of 9 mm diameter were made in 20 mL nutrient agar (Oxoid) inoculated with 20µL of a suspension of test organisms. The wells were filled with 100 µL of the extracts (5 mg/mL), and incubated at 37oC for 24 hours, after which they were examined for zones of inhibition. Amoxycillin (200 µg/mL) was included as positive control. The test results are the mean of 3 replicates.

Micro Dilution Assay: Minimal inhibitory concen-tration (MIC) was considered as the least concen-tration of the extract that inhibited visible growth of the test organism was determined based on a micro-well dilution method 4. The inocula of microorganisms were prepared from 24-hour Mueller Hinton broth cultures.

The 96-well sterile plates were prepared by dispensing into each well 100 µL of double strength nutrient broth and 100 µL of plant extract (7.8 µg/mL - 1000 µg/mL) together with 20 µL of the inoculum (105 CFU/mL). The microplates were incubated at 37oC for 24 hours. Bacterial growth was determined by adding 20 µL of a 5% solution of p-iodonitrotetrazolium salt (MTT) and incubating for further 30 minutes. Dark wells indicated the presence of microorganisms as the dehydrogenase enzymes in the live bacteria reacts to form a dark complex with the p-iodonitrotetrazolium salt. Amoxycillin (7.8 µg/mL - 1000 µg/mL) was included as positive control. All experiments were carried out in 3 replicates.

Carrageenan-induced Oedema: Anti-inflammatory activity was determined by the method of Roach and Sufka 5, modified by Woode et al., 6. Three groups of cockerels containing 5 chicks in each group received the plant extract (30, 100 and 300 mg/kg, p.o.), the standard groups received diclofenac (5, 15 and 50 mg/kg, i.p.) and dexamethasone (1,3 and 10 mg/kg, i.p.) and the control animals received the vehicle only. All the treatments were given 30 minutes for i.p. route and 1 hour for p.o prior to the subplantar injection of carrageenan (10 µL of a 2% w/v solution). Foot volumes were measured by water displacement plethysmography at 0, 1, 2, 3, 4, and 5hour 7.

Statistical Analysis: Raw scores for right foot volumes were individually normalized as percentage of change from their values at time 0 then averaged for each treatment group. The time-course curves for foot volume was subjected to two-way (treatment × time) repeated measures analysis of variance with Bonferroni’s post hoc t test. Total foot volume for each treatment was calculated in arbitrary unit as the area under the curve (AUC). The inhibition percentage of oedema was calculated for each animal group in comparison with its vehicle-treated group.

Differences in AUCs were analyzed by ANOVA followed by Newman-Keul’s post hoc t test. ED50 (dose responsible for 50% of the maximal effect) for each drug was determined by using an iterative computer least squares method, with the following nonlinear regression (three-parameter logistic) equation:

Where X is the logarithm of dose and Y is the response. Y starts at a (the bottom) and goes to b (the top) with a sigmoid shape.

Free Radical Scavenging Activity of the Ethanolic Extracts: The stable 1, 1-diphenyl-2-picryl hydrazyl radical(DPPH) was used for determining the free radical scavenging activity of the extract 9. Different concentrations of the extracts (3, 1.5, 0.75 and 0.375 mg/mL) were added at an equal volume, to methanolic solution of DPPH (20 mg/L). After 30 minutes, the absorbance was measured at 517 nm. Inhibition of radical scavenging was calculated according to the following equation.

IC50 values represent the concentration of sample, which is required to scavenge 50% of the DPPH free radicals. The test results are the mean of 3 replicates.

Total Antioxidant Capacity: Total antioxidant capacity of extract was determined as described by Prieto [11]. Ascorbic acid served as positive control. Three mL of reagent solution (0.6 M H2SO4, 28 mM Na2HPO4 and 4mM ammonium molybdate) was pipetted into test tubes. A total of 1mL extract (0.125-2.5 mg/mL) was then added to the same test tubes, and incubated at 95oC for 90 min and centrifuged. Absorbance of the supernatant was determined at 695 nm. Total antioxidant values are expressed in terms of ascorbic acid equivalent (mg/g of dry mass).

Phytochemical Screening: The preliminary phyto-chemical screening was performed by the standard methods 12.

Micro-Dilution Assay: Minimum inhibitory concentrations were observed for the extracts that showed activity in the agar well diffusion assay. The extracts showed activity with MICs from 125 µg/mL to more than 1000 µg/mL (Table 1). 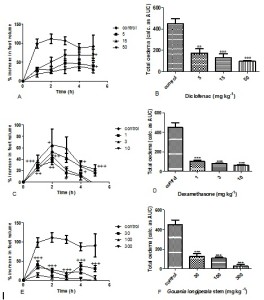 Based on the ED50 values (Table 2) obtained from the dose response curves (Figure 1), the standard drugs, diclofenac and dexamethasone were four to five times as effective as Gouania longipetala stem as an anti-inflammatory agent.

TABLE 2: ED50 VALUES FOR THE EFFECT OF GOUANIA LONGIPETALA STEM, DICLOFENAC AND DEXAMETHASONE IN CARRAGEENAN-INDUCED OEDEMA IN CHICKS

TLC-screening for Antioxidant Compounds: The active compounds were detected as yellow spots on a violet background. The extract was subjected to further testing.

Free Radical Scavenging Activity: The extract reduced DPPH to the yellow coloured product, diphenylpicrylhydrazine, and the absorbance at 517 nm declined. The extract as well as n-Propyl gallate exhibited concentration dependent scavenging activity. The rank order of potencies, as defined by EC50 in mg/mL  is shown in Table 3. The extract was found to be equally potent as the n-propyl gallate.

Phytochemical Screening: The results of the phytochemical screening on the powdered plant parts are as shown in Table 4.

DISCUSSION: The present study establishes the antibacterial, antioxidant and anti-inflammatory effects of the 70% ethanolic extract of the stem of Gouania longipetala. The extractwas active against all 8 microorganisms employed in the antibacterial assay with MIC ranging 125 µg/mL to more than 1000 µg/mL. The largest diameter of zone of inhibition 24.00 mm observed for the agar well diffusion method was against Bacilllus subtilis NCTC 10073 (Table 1). The extract recorded a very low MIC, 125 µg/mL against the same microorganism (Table 1).

Bacterial infections are implicated among the conditions treated with Gouania longipetala in traditional medicine. These ailments include chronic ulcers, trachoma, conjunctivitis, iritis and venereal diseases. The role of anti-infectives in the management of these conditions has been well documented.

Different classes of secondary metabolites have been shown to possess antimicrobial effect. These include alkaloids, tannins, saponosides, diterpenoids, triterpenoids and steroids 13. Phytochemical tests established the presence of one or more of these metabolites and may be responsible for the antibacterial effects observed (Table 4).

Carrageenan-induced oedema, an animal model of acute inflammation, involves the synthesis and/or release of histamine, serotonin, kinins, prostaglandins and cyclooxygenase-2 14. These mediators cause the symptoms of pain, oedema, redness, fever and loss of function. Inhibition of these mediators normally relieves the inflammation. This study has shown that the stem of Gouania longipetala gave a maximal inhibitory effect of total oedema by 93.78% at 300 mg/kg. Consequently, their anti-inflammatory activity is backed by inhibiting the synthesis, release or action of the inflammatory mediators.

Free radical formation occurs due to both enzymatic and non-enzymatic reactions. These reactions include phagocytosis, prostaglandin synthesis, non-enzymatic reactions of oxygen with organic compounds and those initiated by ionizing radiations 17. Free radicals are part of the defense mechanisms against infections. However, excess free radicals may damage tissues. Antioxidants are capable of counteracting the damaging effects of free radicals. The scavenging effect of Gouania longipetala in the DPPH assay was 0.004 mg/mL. The total antioxidant capacity expressed as ascorbic acid equivalent was 0.804 mg/g dry weight of extract. In the total phenol content, the extract gave a value of 52.0174 mg/g dry weight of extract expressed as tannic acid equivalents. The results obtained suggest the potential of the extracts as antioxidant agents.

Phenolic and flavonoid components are reported to function as good electron and hydrogen atom donors and therefore, are able to terminate radical chain reaction by converting free radicals and reactive oxygen species to more stable products 18-19. Thus, the presence of these secondary plant metabolites in the plant may be responsible for the antioxidant effects observed. Phenolic content of the extract correlated highly, R = 0.93, with their total antioxidant capacities.

CONCLUSIONS: In conclusion, the extract of Gouania longipetala stem possesses antibacterial, antioxidant and anti-inflammatory properties which are likely to contribute to their beneficial effect in the various ailments mentioned early on.

Further isolation of the various compounds responsible for these activities is in progress in our laboratories.

ACKNOWLEDGEMENTS: The authors wish to acknowledge the technical assistance offered by Messrs. Samuel Kakraba and Thomas Ansah of the Departments of Pharmacognosy and Pharmacology.