INTRODUCTION: The large Melghat tract In Maharashtra State is a hilly terrain of Satpura ranges, which is highly dense forest and occupies an area of about 4000 Sq. km.  Melghat with dominant population of Korkus and Gond tribes still depends on knowledge of local “vaidus” and “bhagats” for primary health care. These local doctors depend on seasonally available local flora for treating human diseases and store herbal material available in hilly areas as dried roots, rhizomes, fruits, seeds, etc 1.

Charaka and Sushruta had recommended sweetened decoction of flowers of Woodfordia fruticosa for fever, haemothermia, persistent dysentery. Dried flowers are sprinkled over ulcers and wounds, for diminishing their discharge. Conflictions of flowers are used as stimulant and astringent, given in dysentery to check hemorrhages and leucorrhoea. Kumaraswamy et al., 2 has studied extracts of Woodfordia fruticosa in various solvents and concluded that petroleum ether followed by methanol extract were highly potent antibacterial agent. Bark of Acacia leucopholea is used for cholera and diarrhea 3. Flowers of Butea monosperma are boiled in water to obtain a dye and also used as an antiseptic, against infections of round worms, thread worms and Giardiasis Badhe and Pande 4.

Roots of Maytenus emerginata are used in gastrointestinal troubles, especially dysentery 5, 6. Pulverized leaves are given in milk to children as a vermifuge. Leaf ash with ghee is applied on sores as ointment 7. The juice of Sphaeranthus indicus an aromatic herb, the plant is styptic and useful in liver and gastric disorders 8. Sticks of Acacia arabica are well known remedies for dental caries 4.   Dwivedi et al 9 studied antibacterial, antimalarial activity of Seed of Caesalpinia bonducella. Resinous exudation of leaf buds and shoots of Gardenia gummifera is used to stop diarrhea due to dentition 3.

Traditional medicines are cheaper, with minimum side reactions and safe. To ensure the safety of its products and practices standardization is of vital importance. The knowledge of medicinal plants came from our ancient literature i.e. Vedas, with time and fast developmental changes had lead pathogens to gain resistance against new generation antibiotics. Hence search for new antibacterial sources that are of green origin has multiple advantages. In the Indian system of medicine, most practitioners formulate and dispense their own recipes; this requires proper documentation and research.

MATERIALS AND METHODS: Frequent field visits were conducted in study area throughout year March to October for collection of specimen samples at flowering and fruiting stages. Specimen samples were identified by Mr. R.B. Giri, Ranger forest officer, Maharashtra forest Rangers college, Chikhaldara (Table 1). Selected parts of plants were collected, cleaned and disinfected with water and mercuric chloride (0.5%), dried in shadow and ground to powder in mixer grinder. For preparation of extracts, 10 g of powder was soaked in100 ml of solvents (water, ethanol, methanol, and acetone) refluxed after 24 h in Soxhlet apparatus, filtered and filtrate was evaporated in controlled conditions of temperatures to avoid destruction of dissolved phytochemicals.

Bacterial inoculums preparation: The standard pathogenic bacterial strains were procured from IMTECH, Chandigarh, India. The bacteria were rejuvenated in nutrient broth medium. Subcultures were prepared from the stock for bioassay. A loopful of culture was inoculated in 10 ml of sterile nutrient broth and incubated at 370 C for 3h turbidity of the culture was standardized to 105 CFU with the help of SPC and Nephlo-turbidometer.

Preparation of disc for antibacterial activities: Sterile blotting paper disc (10mm) were soaked in the solution in such concentration that the amount of solution absorbed by each disc was 2, 4, 6, 8, 10 mg of each extracts of Acacia leucopholia (Bark), Butea monosperma (Seed and Flowers), Woodfordia fruticosa (Root, Flowers), Maytenus emerginata (Leaves and Root), Sphaeranthus indicus (Fruits and Whole plant), Acacia arabica (Leaves), Caesalpinia bonducella (Seed), Gardenia gummifera (Resins). The prepared discs were dried in controlled temperature and used for study.

Agar disc diffusion for antibacterial activities: For antibacterial properties, 0.1mL bacterial suspension of 105 CFU ml -1 was uniformly   spread on Mueller-Hinton agar (MHA) plate to form lawn cultures. The dried discs (dried at 370C over night) were applied to the surface of MHA plates seeded with 3h broth culture of test bacterium. The plates were incubated for 18 h at 370C. Antibiotic susceptibility discs, Ciproflxacin10 µg, were used as positive control while disc soaked in various organic solvents and dried were placed on lawns as negative control. The antibacterial activity was evaluated for 10mg/disc and diameter of inhibition zones were measured.

Phytochemical analysis: The presence of saponins, tannins, anthraquinones, alkaloids, triterpenes, flavonoids, glycosides, reduced sugar and phenols were detected by qualitative methods given by    Khandelwal 10. Antibacterial response of the medicinal plants against various pathogens was calculated as: 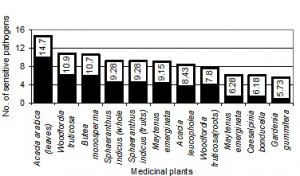 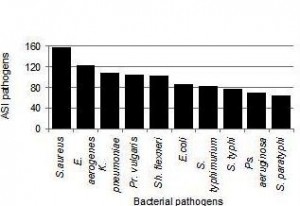 Presence of steroids cardiac glycosides, anthraquinone, flavonoids and phenolics in both extracts suggested that solubility of different phytochemicals in different solvents must be responsible to show the difference in their antibacterial effects. Moderate sensitivity of Acacia leucopholia in ethanol and Methanol extracts in most of test pathogens must be due to its tannin contents found in Acacia species 11. Methanol extracts when tested by Dabur et al., 12, against clinical isolates and standard strains found that MIC was 300µg/ml for E. coli, B. cereus and Klebsiella sp.

Methanol extracts of the East India globe thistle was potent antibacterial against S. aureus and Sh. flexneri. Deshpande et al., 13 studied acetone and methanol extracts of fruit of Sphaeranthus indicus exhibited activity against Gram +ve and resistant to Gram –ve bacteria. Similar results were also observed in organic solvents extracts in discs with highest concentration of 10 mg in present work. Khare 3, stated that contents of Alkaloids, Tannins and volatile oil posse’s antibacterial properties against Vibrio cholera and Micrococcus sp. Flavonoids are synthesized by the plants in response to microbial infections, in vitro they were effective antimicrobial substances against wide array of microorganisms 14. Kumar et al., 15 found that extracts of Sphaeranthus indicus were highly antibacterial. Antibacterial activity of Woodfordia fruticosa flowers was recorded 12. The results were parallel to our findings for the highest contents in the discs i.e.10 mg. Sensitivity of S. aureus, Pseudomonas supported flower’s use as an antiseptic by the Korkus. Parekh and Chanda16 recorded that crude methanol extracts of Woodfordia fruticosa was good antibacterial at against all tested microorganisms as it is rich in tannins.

Ethanol extract of Butea monosperma was able to produce sensitivity in S. typhi, E. coli, Pseudomonas and S. paratyphi. Shigella flexneri was strongly inhibited by the same extract. Moderate sensitivity was observed in S. aureus, E. aerogenes, S. typhimurium, Pr. vulgaris and Klebsiella sp. Flowers of Butea monosperma were reported as active against worms, piles, colic pains. Tannins in Butea monosperma were active in diarrhea, dysentery when new formulations in herbal medicines were designed and studied for their antibacterial phytochemicals 3. Ethanol extract of Maytenus emerginata (leaves) was antibacterial to Klebsiella sp. and Pr. Vulgaris proved by Nair et al., 17 and Tambekar and Khante 18.  E. coli, S. aureus, E. aerogenes, S. typhi, S. typhimurium and Sh. flexneri were mild sensitive. Pr. vulgaris was strongly sensitive to ethanol extract of root of Maytenus emerginata. Pseudomonas was also strongly inhibited but Sh. flexneri; S. paratyphi and E. coli were resistant to ethanol extract at highest conc. of 10 mg of the root. While others were mild sensitive to the same extract.

SUMMARY AND CONCLUSION: Further study of phytochemicals present in these medicinal plants may reveal some new antimicrobials. Alkaloids from Butea monosperma, essential oils in Sphaeranthus indicus, and tannins in Acacia leucopholia, Acacia arabica must be studied in detail. From the results we can conclude that the crude extracts of Woodfordia fruticosa, Sphaeranthus indicus, Butea monosperma, Acacia leucopholia and Maytenus emerginata exhibited significant antimicrobial activity and properties that support folkloric use in the treatment of some diseases as broad spectrum antimicrobial agent. This probably explains the use of these plants by the indigenous people in Melghat against a number of enteric infections since generations.