INTRODUCTION: Antimicrobials are one of a very important category of drug; these classes of drugs are prescribed right from a simple infection to the serious diseases like cancer and also in life threatening infections like meningitis. So it is quite clear from the spectrum of use that these categories of drugs are very important from medical point of view. But microbial resistance towards the drug creates a very serious problem since last three decades 1, 2, because of this development of resistance many drugs are now useless which were very effective before.

Moreover, the toxic effects produced by these antibiotics are also reducing their significance. So the need for new antimicrobial is always be there. The semicarbazides, which are the raw material of semicarbazones, have been known to have biological activity against many of the most common species of bacteria3. Semicarbazone, themselves are of much interest due to a wide spectrum of antibacterial and antifungal activities 3, 4.

Recently some workers had reviewed the bioactivity of semicarbazones and they have exhibited anticonvulsant 4-6, anti-tubercular 7, analgesic, anti-inflammatory etc., 8. Antibacterial screening of synthesized semicarbazone derivatives was conducted using a filter paper disc method.

MATERIALS AND METHODS: Chalconesemicarbazones 9 were synthesized according to synthetic scheme as shown in figure 1.

Melting points were measured in open capillary tubes on a Buchi 530 melting point apparatus and were uncorrected. Infrared (IR) and proton nuclear magnetic resonance (1H NMR) spectra were recorded for the compounds on Jasco IR Report 100 (KBr) and Brucker Advance (300 MHz) instruments, respectively.Chemical shifts are reported in parts per million (ppm) using tetramethylsilane (TMS) as an internal standard. All exchangeable protons were confirmed by addition of D2O. Mass spectra were measured with a Shimadzu GC-MS-QP5000 spectrophotometer.

Only molecular ions (M+) and base peaks are given. Elemental analysis (C, H and N) were undertaken with a Perkin-Elmer model 240C analyzer, and all analyses were consistent with theoretical values (within 0.4%) unless indicated. 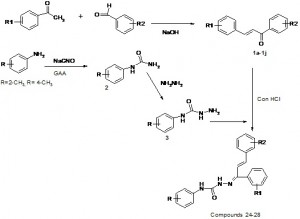 The structure (figure 2) and physicochemical properties of the synthesized title compounds are given in table 1.

Antibacterial activity: All the synthesized compounds were screened for their antibacterial activity against two gram positive (Staphylococcous aureus, Bacillus lentus) and two gram negative (Escherichia coli, Proteus vulgaris) bacteria at 100 µg/ml involving disc diffusion method with Mueller-Hinton agar media (Hi-Media) 10-12. Antibacterial activity was determined by measuring the zone of inhibition in millimeters around each of the disk and compared with standard Ciprofloxacin (100μg/ml).

RESULTS AND DISCUSSION: All the compounds were assessed for their in vitro antibacterial activity against different strains of gram positive and gram negative bacteria. Solvent DMSO was used as solvent control and ciprofloxacin was used as standard. The biological data of the compounds is given in Table 2. The substitution with different substituent on the phenyl of the aldehydic and acetophenic group of chalcone moiety plays an important role in the zone inhibition of bacteria. As from the tables it could be seen that all the synthesized compounds are inactive against gram positive bacteria.

M. Singhal and A. Paul