Moringa preparations have been cited in the scientific literature as having antibiotic, antitrypanosomal, hypotensive, and antispasmodic, antiulcer, anti-inflammatory, hypo-cholesterolemic, and hypoglycemic activities, as well as having considerable efficacy in water purification by flocculation, sedimentation, antibiosis.  To evaluate the antioxidant activity of Moringa oleifera leaf extracts and their in- vitro antibacterial activity against four microorganisms, viz. Escherichia Coli, Bacillus subtilis, Staphylococcus aureus and Salmonella typhii. Phytochemical screening of the leaf extracts in solvents of varying polarity; viz., water, methanol, ethanol and acetone were also carried out. The antioxidant activity of the extracts was determined by the reducing power assay using ascorbic acid as standard.  Well diffusion method was used to assess the antimicrobial effect of the extracts on both Gram positive and Gram negative micro-organisms. Well known chemical procedures were used for the detection of the phytochemical components. The aqueous extract exhibited maximum antioxidant activity compared to the organic solvent extracts. Acetone extract showed broad spectrum antimicrobial effect against all the tested micro-organisms while the methanolic extract was active against all microorganisms used, except E. coli.  The ethanolic extract was active against Salmonella typhii, and Staphylococcus aureus whereas the aqueous extract exhibited an inhibitory effect on Staphylococcus aureus only. The phytochemical screening indicated the presence of phenolics, flavonoids, tannins, glycosides etc., in the extracts. We believe that the higher reducing power of the aqueous extract could be due to the better solubility of the antioxidant components in water whereas the predominant antibacterial activity in organic solvent extracts as compared to aqueous extracts, indicates that the active components responsible for the bactericidal activity are more soluble in organic solvents. These studies provide an evidence to support traditional medicinal uses of the plant.

INTRODUCTION: In recent decades, the use of medicinal plants has a revival of interest as they could provide therapeutic response and do have potential to be developed as medicines.   Nowadays, the control of bacterial and fungal infections has become complicated due to the emergence of bacteria and fungi resistant to many conventional antibiotics. The involvement of free radicals has been demonstrated in many serious diseases 1-3. These free radicals generate oxidative stress and alter the overall condition of the patient by their paralyzing action on the immune system. It has been known that plant extracts which contain phenolic and flavonoid compounds have antioxidant and antibacterial effects 4-6.

Moringa oleifera, locally known as Moringa belongs to the monogeneric family Moringaceae and is widely distributed in India 7.   It is well documented for its extraordinary nutritional and medicinal properties.   It is a natural antihelmintic, antibiotic, detoxifier, outstanding immune builder and is used in many countries to treat malnutrition and malaria. It is also used in water purification and therefore helps in reducing the incidence of water borne diseases 8. Leaves are known to have anti-oxidant properties and are known to cure hallucinations, dry tumors, hiccups and asthma 9. The extracts of the leaves are known to have biological properties and these are usually found to vary with the type of solvent used to extract the active components.

Taking into consideration, the medicinal importance of the plant and the effect that different solvents have in deciding the medicinal effects of the extracts, we decided to compare the efficiency of the ethanolic, methanolic, acetone and aqueous extracts of Moringa oleifera leaves on selected gram positive and gram negative bacterial species.  From our literature survey, no such comparative study has been done for the M. oleifera leaf extracts. Comparisons of the phytochemical constituents as well as reducing power of the different extracts were also carried out.

Collection of plant materials: The experiment was conducted in the year 2011 in the college laboratory.  Leaves were collected from the Moringa oleifera tree in the college campus. It was ensured that the plant was healthy and uninfected. The leaves were washed under running tap water to eliminate dust and other foreign particles and to cleanse the leaves thoroughly and dried

Preparation of leaf extracts: 20-30 grams of fresh leaves were boiled with 200 mL of solvent for 1 hour. The extract was filtered using Whatmann filter paper No. 1 and then concentrated in vacuo at 40°-50 °C using a rotary evaporator.  Evaporation of solvent in the rotary evaporator affords a crude extract of the soluble components and these extracts were subjected to the qualitative phytochemical analysis, reducing power assay and antimicrobial studies.

Phytochemical Analysis: The extracts were analyzed by the following procedures14 to test for the presence of the alkaloids, saponins, tannins, phenols, flavonoids, glycosides, volatile oils and reducing sugars

Saponins: Saponins were detected using the froth test.  1g of the sample was weighed into a conical flask in which 10ml of sterile distilled water was added and boiled for 5 minutes.  The mixture was filtered and 2.5 ml of the filtrate was added to 10ml of sterile distilled water in a test tube.  The test tube was stoppered and shaken vigorously for about 30 seconds.  It was then allowed to stand for half an hour.  Honeycomb froth indicated the presence of saponins.

Tannins: To a portion of the extract diluted with water, 3-4 drops of 10% ferric chloride solution is added.  A blue color is observed for gallic tannins and green color indicates for catecholic tannins.

Phenols: Equal volumes of extract and ferric chloride solutions are mixed and the presence of phenols is indicated by a deep bluish green color.

Glycosides: 25ml of dilute sulphuric acid was added to 5ml extract in a test tube and boiled for 15 minutes, cooled and neutralized with 10%NaOH, then 5ml of Fehling solution added.  Glycosides are indicated by a brick red precipitate.

Alkaloids: 2ml of extract was measured in a test tube to which picric acid solution was added.  An orange coloration indicated the presence of alkaloids.

Volatile oils: 2ml of extract was shaken with 0.1ml dilute NaOH and a small quantity of dilute HCl.  A white precipitate is formed if volatile oils are present.

Flavonoids: 4ml of extract solution was treated with 1.5 ml of 50% methanol solution.  The solution was warmed and metal magnesium was added.  To this solution, 5-6 drops of concentrated hydrochloric acid was added and red color was observed for flavonoids and orange color for flavones

Determination of Reducing Power: The reducing powers of extracts were determined as per the reported method 15.  Different concentrations of the four extracts in 1 ml methanol were mixed with phosphate buffer (2.5ml, 0.2M, pH 6.6) and potassium ferrocyanide (2.5ml, 1%).  The mixture was incubated at 50°C for 20 min. A portion (2.5ml) of trichloroacetic acid (10%) was added to the mixture, which was then centrifuged at 3000 rpm for 10 minutes.  The upper layer of the solution (2.5ml) was mixed with distilled water (2.5ml) and FeCl3 (0.5ml, 0.1%).  The absorbance was measured at 700 nm and compared with that of ascorbic acid as standard.

Determination of Antibacterial Activity: The antibacterial activity of the leaf extracts was determined using agar well diffusion method by following the known procedure16.   Nutrient agar was inoculated with the given microorganisms by spreading the bacterial inoculums on the media. Wells were punched in the agar and filled with plant extracts. Control wells containing neat solvents (negative control) were also run parallel in the same plate. The plates were incubated at 37°C for 18 hours and the antibacterial activity was assessed by measuring the diameter of the zone of inhibition. The antibacterial potency of the different extracts was evaluated by comparing their zones of inhibition.

RESULTS AND DISCUSSION: The results of phytochemical screening of the extracts obtained by boiling the leaves with the corresponding solvents for 1 hr are given in Table 1. It is seen that with increase in polarity of the solvents there is an increase in extraction efficiency as well as active components. Under the extraction conditions adopted, glycosides and saponins were detected in the aqueous extract only.

Phenolics and catecholic tannins were present in the aqueous, methanolic and ethanolic extracts.  The concentration of tannins was found to be more in the ethanolic and methanolic extracts than in the aqueous extracts. As the polarity of the extraction medium decreased, it is seen as in the case with acetone none of these components could be extracted.  However, the less polar acetone contained volatile oils which were not detected in the polar solvent extracts.

TABLE 1: QUALITATIVE PHYTOCHEMICAL ANALYSES OF THE EXTRACTS OF MORINGA OLEIFERA LEAVES a

a (+) indicates presence while (–) indicates the absence of the components

The effect of solvents on extraction of components with reducing activity was also found to show a similar trend (Figure 1).

Increased absorbance of the reaction mixture indicated increased reducing power of the extracts. The reducing power of a compound is related to its electron transfer ability and may therefore serve as a significant indicator of its antioxidant activity.  Here water is found to be most efficient in extracting the antioxidant compounds.

These studies also indicated ethanol to be a better solvent than methanol in extraction of these compounds.  As seen in the graph, the reducing power of the four extracts was lower than that of ascorbic acid, chosen as the standard.

The antimicrobial activities of the extracts with different solvents gave different zones of inhibition on the organisms tested and differing selectivities (Figure 2). 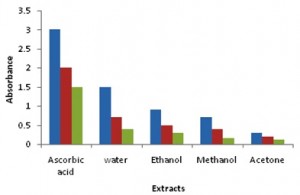 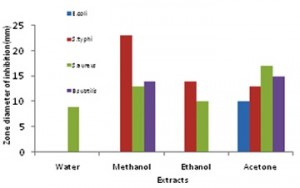 FIG. 2:  BACTERICIDAL EFFECT OF THE MORINGA LEAF EXTRACTS WITH SOLVENTS OF VARYING POLARITY

Our studies are in agreement with earlier studies which indicate the plant’s antibacterial activity against both gram positive and gram negative organisms. The acetone extract inhibited the growth of all the organisms tested. The broad spectrum effect of the acetone extract could be due to the volatile oils which contain a variety of chemical constituents with different functionalities. The methanolic extract was found to be effective against the three tested organisms, viz. S. typhii, S. aureus and B. subtilis. It showed no inhibitory effect against E. Coli.

This extract was found to be particularly effective against Salmonella typhii for which it showed a zone of inhibition of 23 mm (Table 2), much greater than that exhibited by the acetone extract. Phytochemical analyses have revealed the presence of phenolics and flavonoids in the polar solvents and these could contribute to the increased antimicrobial activity. The ethanolic extract exhibited an antimicrobial activity below that of the methanolic extract. It was also found to be active only against Staphylococcus aureus and Salmonella typhii, probably due to the lesser amount of phenolics and flavonoids in these extracts. The aqueous extract shows an inhibitory effect against Staphylococcus aureus only and the zone of inhibition is only 9 mm, much less than the other three extracts.  Though water has maximum polarity of the solvents chosen, the water soluble flavonoids (mostly anthocyanins) have no antimicrobial significance and water soluble phenolics are only important as antioxidant compounds 17.

CONCLUSION: The results of the present study revealed the biological properties of Moringa Oleifera leaves, viz. the bactericidal and antioxidant properties and the importance of solvent as the decisive factor.  While aqueous extraction yields more of the antioxidant components, extraction with polar organic solvents yielded constituents with maximum bactericidal activity.  Tuning the polarity of the organic solvents and extraction conditions could yield components with selectivity and high antimicrobial effects.

The volatile oils extracted by less polar organic solvents exhibit broad spectrum antimicrobial action. Extracts with organic solvents are therefore promising natural antimicrobial agents with potential applications in controlling bacteria like Salmonella typhii.  On the other hand, aqueous extract of M. Oleifera has the potential to be developed into novel antioxidant drugs.