INTRODUCTION: Herbal medicine represents one of the most important fields of traditional medicine all over in the word.  Plant is still the main source in searching the new medicine, there is increasing interest in plant as sources of agents to fight microbial diseases.  For that, the usage of plants is still the main priority for research because medicine from plants has its own advantages which has low toxicity, easy to get, cheap and has less side effect if it is used in a right dose.

One of this example is Phaleria macrocarpa (Scheff) Boerl) from Papua island. Empirically it has been used as a traditional medicine. It is used in two forms. Firstly, in unprocessed form or it can be eaten as it is, like guava. Some people also like to add chillies while eating the fruit salad. It is very dangerous. It has a very serious effect which starts from wounds on the lips and mouth, tongue cannot taste, drunk and even get toxic.

Secondly, it is already processed into ingredients. These ingredients can be combined with other ingredients from other plants 1.

Phaleria macrocarpa (Scheff.) Boerl. known as Mahkota Dewa has been used traditionally for treatment of cancers in Indonesia and also to cure many diseases like lever, heart, diabetic, skin diseases, rheumatism, anti histamine, and lower the cholesterol level. The therapeutic effect of natural material is directly related to the chemical compound of their host.

An excessive phytochemical and biological activities investigation on the Phaleria macrocarpa  (Scheff) Boerl fruit have been done 1, 4, 7, 8.

Preparations of Crude Extracts and TLC Profiling: The crude extracts were obtained by successive extraction using hexane, chloroform, ethyl acetate and methanol.  The dried powder of leaves (500 g) was extracted five times at room temperature for 24 hours. The extract were evaporated under reduced pressure to give 5% hexane (HMD), 6% chloroform (CMD), 2.5% ethyl acetate (EMD), and 3% methanol (MMD). TLC of HMD, CMD and EMD were performed by  using TLC plastic sheets (Merck 1.05735.0001) which were pre-coated with silica gel 60F254, and MMD on TLC Aluminum sheets  (Merck 1.05559.0001) which were pre-coated with RP-18F254S . The TLC visualization was carried out by using UV-254nm, iodine vapour, DPPH TLC bioautographic assay (antioxidant potency tested), reagent spray with vanillin and ferric chloride (FeCl3).

Agar Well Diffusion Method: All bacteria were cultured in appropriate broths at 30oC for overnight and concentration were adjusted using a spectrophotometer   (λmax 600nm) to 105-106 colony forming units (CFU) per mL. Agar cultures were prepared as described by Jorgensen (1987) and bacterial test was performed by the Mueller Hinton agar well diffusion method (modification method of Perez et al., 1990 and Collins et al., 1995).

The suspension was used to inoculate 90 mm diameter Petri dishes with a sterile non-toxic cotton swab on a wooden applicator. The cut agar disks were carefully removed by the use of forceps sterilized by flaming. To each well were introduced different concentrations (100, 50, 25, 12.5, 6.25, 3.125, 1.625 mg/mL) of crude extract. Sample of crude extracts (20µL) was loaded onto each well.

Then, antibiotic gentamycin was located on the middle of agar surface. Control negative experiment was used solvent (DMSO) with no plant extract. The plates were incubated for 24 hours at 37oC. Clear inhibition zones around the well were measured after the incubation period. All the determinations were performed in triplicates. The clear inhibition zones around the well indicated the presence of antimicrobial activity.

Radical Scavenging Activity Assay: The Radical scavenging activity was measured by the 1, 1-diphenyl-2-picrylhydrazyl (DPPH) method. The ability of extracts to scavenge the a, a-diphenyl-b- picrylhydrazyl (DPPH) radical was measured as reported by Von Gadov et al. (1997). 50 mL of methanolic solution of crude extracts (10 mg/mL) was placed in cuvette and 2 mL of methanolic DPPH (Sigma, Germany) solution (6x10-5 M) was added. The decrease of absorbance was determined at 515 nm using BIO RAD Smart Spec Plus Spectrophotometer.

The absorbance measurement commenced immediately and recorded as absorbance at t = 0. Then, the test solution was incubated in dark place for 30 minutes before read the absorbance and recorded as absorbance at t = 30. The determinations were performed in three replicates.  Positive control was used in this method are Quercetin (Sigma, Germany). The radical scavenging activity of the tested sample was expressed as inhibition percentage of the DPPH radical scavenging activity, calculated using this following formula:

MTT Assay: The 3-(4, 5-dimethylthiazol-2-yl) 2, 5-diphenyl tetrazolium bromide (MTT) assay, a previously described method was used14 with some modifications. The MTT assay relies on the production of a colored formazan by the action of mitochondrial enzymes on MTT. For the MTT assay, HepG2 cells were seeded at a density of 2.5 X 105 cells/well on 96-well plastic plates. The test was performed using sterile flat-bottomed 96 well plates. Test samples, EMD and MMD were prepared in varying concentration by serial dilution in MEM medium with concentration of 60, 30, 15, 7.5, 3.75, 1.875, 0.938 and 0.469 µg/mL. 100 µL of varying concentration were added into each well and followed by 100 µL of cells. Then, the plates were incubated for 72 hours at 37°C, 5% CO2, 90% humidity.

The assay of each concentration was performed in triplicates and untreated well cell population was performed as control wells. After 72 hours, colorimetric MTT method assay was used to measure the living cells. The viability of cells was measured by the amount of blue formazan crystals after 20µL fresh MTT solution (5 mg/ mL in PBS) was added to each well. The plate then was incubated for four hours at 37 0C, 5% CO2, 90% humidity.

About   170µL of medium was removed from each well. Then 100 µL of DMSO was added into each well and mix thoroughly by pipettes 10-20 times to dissolved the blue formazan crystals. The plate was left for 30 minutes before reading the absorbance on ELISA reader at 570 nm reference wavelengths. Cytotoxic activity was expressed as fifty-percent Inhibition concentration (IC50), i.e. the concentration that yields 50% inhibition of the treated cells compared to untreated cell control.

TLC profiling of phaleria macrocarpa leaves Crude Extracts: The TLC profiling of the crude extracts were done. Based on the result of TLC (Figure 1), the best solvent system to isolate the compound of HMD and CMD is hexane: ethyl acetate (7:3, 5:5). Meanwhile the compound of EMD and MMD is chloroform: ethyl acetate (4:6) and water: acetonitril (6:4). Bands with the DPPH scavenging activity were observed as white yellow bands on a purple background, and showing the presence of antioxidant compound. Nevertheless the intensity white yellow bands displayed by the EMD and MMD TLC profiling were higher than that of HMD and CMD.

This indicated that the antioxidant compound is major in EMD and MMD (with Rf = 0.65). Besides that, there were minor DPPH free radical scavenger compound which appeared as yellow band when sprayed with DPPH (Figure 1d) and this band appeared as brown colour on the TLC profiling of the CMD, EMD and MMD extracts when sprayed with  1% FeCl3 in methanol, indicating  the existence of phenolic compound (Figure 1e). This was also proven by the existence of red spot after being sprayed with vanillin-sulfuric acid reagent (Figure 1c). 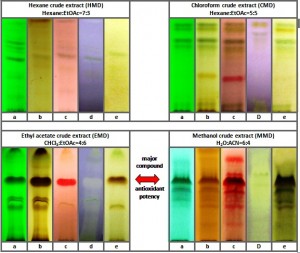 Phenolics are the major contributors to the antioxidant activity of fruits, vegetables, grains and many plants 2, 3. There was a correlation between antioxidant activity and total phenolic content of Phaleria macrocarpa (Scheff) Boerl.) leave extracts 18. In general, the higher total phenolic content will result in the higher total antioxidant capacity 19. Besides that, other researchers also proved that phenolic compound have a direct relationship with antibacterial effect 20. 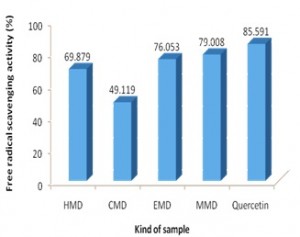 Cytotoxicity assay: In this research, HepG2 cell lines was used to predict of the toxicity. Human-derived liver cells HepG2 have been extensively used as the test system for the prediction of toxicity, carcinogenicity and cell mutagenecity in humans 22. Result in Figure 3 show that only EMD and MMD were had IC50 value between 30-60µg/mL (with IC50 value are 32.5 µg/mL and 40 µg/mL, respectively), meanwhile the HMD and CMD were had IC50 > 60µg/mL.

However, since reactive oxygen radicals play an important role in carcinogenesis 23. It is therefore possible to sugest that the presence of antioxidants compound in the Phaleria macrocarpa (Scheff) Boerl.) leaves extracts may play some role in reducing cell number. 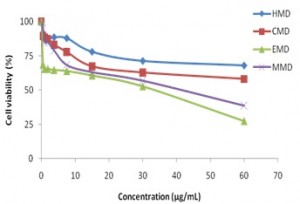 CONCLUSIONS: The study showed that the DPPH free radical scavenging of EMD and MMD should be contributed by phenolic compounds, and showed mildly toxicity in HepG2 cell lines. Presence of antioxidants compound in the Phaleria macrocarpa (Scheff) Boerl.) leaves extracts may play some role in reducing cell number. Furthermore, the natural product derived from Phaleria macrocarpa (Scheff) Boerl.) leaves extracts have potential  use in the food and/or pharmaceutical industries as antioxidant and antimicrobial agents.

ACKNOWLEDGEMENTS: The authors wish to thank the Ministry of Higher Education (MOHE)   for the fund provided under the Fundamental Research Grant Scheme (FRGS) Fasa I/2010 (Vote No.59181).  Appreciation goes to Institute Marine Biotechnology, UMT, Kuala Terengganu, Malaysia for running the MTT, antioxidant  and antimicrobial assay.