INTRODUCTION: Urinary tract infection (UTI) is the most common bacterial infection encountered in general medical practice 1, 2. UTI is defined as the multiplication of organisms in the urinary tract. It is usually associated with the presence of neutrophils and >105 organisms in a midstream (MSU) 3. The organisms causing UTI in the community are E. coli (over 70% infections), Proteus, Pseudomonas species, Streptococci, Staphyllococcus 4, 5.

In hospital E. coli predominates; Klebsiella or Streptococci are more common causative microorganisms of UTI in hospitals than in the community 6. The nosocomial pathogens have shifted away from easily treated bacteria to more resistant strains 7. UTI causes morbidity and, in a small minority of cases, renal damage and chronic renal failure 3. Variations may be seen in the microbial resistance pattern with time and place 8.

Appropriate antimicrobial therapy may reduce the potential for complication. Choice of appropriate antibiotics depends on the knowledge of common organisms and their antimicrobial susceptibility pattern in local scenario 7, 9. In a study conducted in the department of internal medicine and the department of  microbiology of Tribhuvan University Teaching Hospital, the most common microorganism causing catheter associated urinary tract infection was found to be E. Coli (40.74% of all cases), and it was followed by, Streptococcus faecalis, Pseudomonas, Staphylococcus aureus, Acinetobacter sp. and multiple bacteria. Ninety percent of  E. coli isolates were found to be resistant to ampicillin, ciprofloxacin and cephalexin, 86% were resistant to cotrimoxazole, co-amoxiclav, 68% to gentamycin, 41% to ceftazidime, 36.4% to amikacin, 22% to nitrofurantoin, 9% to piperacillin, and none of them were resistant to imepenem 6. A cross-sectional study, carried out from August 2008 to October 2009 at the Bahiana School of Medicine involving 260 pregnant women without symptoms of urinary tract infection, showed that the prevalence of asymptomatic bacteriuria was 12.3%. E. coli was the most frequent etiologic agent (59.4%) 10.

Knowledge of local susceptibility trends is also an essential consideration when selecting empiric therapy for UTI 11. Selection of the most appropriate antimicrobial therapy for the management of UTI should consider the pharmacokinetics of the agent, its spectrum of activity relative to the anticipated pathogens, potential for adverse effects, duration of therapy, overall cure rate, and cost. Increasing antimicrobial resistance among common uropathogens has recently become another important factor in antimicrobial selection 12. Short-course therapy (3-day) is comparably effective but produces fewer side effects and costs less than longer duration courses for uncomplicated UTI, and is thus preferred. Complicated UTI often requires treatment durations of 7 to 14 days, sometimes with initial parenteral therapy.

However, the broad spectrum of activity and favorable pharmacokinetic properties of the fluoroquinolones (excellent absorption after oral administration and high and prolonged urinary concentrations) now facilitate oral treatment of many complicated UTIs 13. The pathogens traditionally associated with urinary tract infection (UTI) are changing many of their features, particularly because of antimicrobial resistance. As a result, empiric treatment will undergo changes over the next several years in an attempt to limit the occurrence of resistance and prevent its spread. A study performed in Bharatpur showed UTI is more common in young females. Out of total 950 samples, 237 (24.94%) samples grew potential pathogens causing UTI. Escherichia coli were the predominant with 163 (68.77%) isolates, followed by Enterobacter spp. with 33 (13.92%). Most of the urinary isolates showed hundred percent resistant to Ampicillin and high degree of resistance to nalidixic acid, nitrofurantoin, and cotrimoxazole, followed by ciprofloxacin and gentamicin. More than 50% of common pathogens were resistant to ceftriaxone. Uropathogens were more sensitive to cephotaxim, amikacin, ofloxacin and norfloxacin. Uropathogens resistant to 3 generation cephalosporin are increasing. Irrational and repeated use of antibiotics is the main cause of increasing resistant organism of UTI 14.

The emerging antimicrobial resistance has been a burden for the treatment of various infectious diseases. It has been considered as a global emerging threat to public 15, 16. Therefore, the present study aimed to study theantimicrobial resistance patterns in UTI outpatients visiting the gynecology department at Tribhuvan University Teaching Hospital (TUTH) of Nepal, and to evaluate the definitive and empirical therapy used for the treatment of UTI.

The prospective study was carried out in out–patient gynecology department of Tribhuvan University Teaching Hospital (TUTH), Kathmandu, Nepal from July 2014 to January 2015.The culture and sensitivity test were done at microbiology department of TUTH. Only those patients who agreed to participate in the study after signing on the consent form were taken for the study. The sampling technique was simple purposive sampling. Also, those patients who were under antibiotics medication for pre-existing illnesses, and those who had recently used antibiotics before hospital visit were excluded from the study. The collected samples were sent to microbiology laboratory for sensitivity test.

Identification of isolated organisms: The samples were cultured in fresh Nutrient Agar Media plates and were incubated for 24 hours to allow microbial growth. For the identification, morphological examination, gram staining test and various biochemical tests were done.

Antibiotics susceptibility test of the isolates were performed on freshly prepared Muller Hinton agar disk diffusion technique. Disc of the various common antibiotics were placed on each isolate and incubated at 37 ºCfor 24 hours. The diameter of zone of inhibition surrounding the antibiotics was measured. Antibiotics were prescribed according to the sensitivity test results.

Data entry, data checking, compiling and editing was done manually and data analysis was done as per the objectives of the study. Data analysis was done with Microsoft excel, and Graph Pad Prism software. The statistical analysis methods are bar-diagrams, charts, pie-diagrams and averages.

RESULTS AND DISCUSSION: During the study period, a total of 200 women attending gynaecology OPD had their urine tested for routine examination, microscopic examination, and culture and sensitivity test. Out of them, 85 showed growth of microorganisms. The number of bacterial growth isolates was 65 and the remaining 20 were multiple growth. The multiple growths were excluded from further study. The percentage of bacterial growth isolated to the culture done was found to be 32.5%. Among the 65 cases, 49 (75.4%) women fell in the age bracket of 21 - 30 years as shown in Fig.1. Fig. 2 depicted that the number of the female who were married was 57 (87.7%).Women in the age group 21 to 30 years are more prone to UTI, as suggested by various studies17.Out of the 65 cases, 31 patients were pregnant (Fig. 3). As previous studies revealed, the prevalence of UTI in pregnants is often higher than in non-pregnants 18, 19. 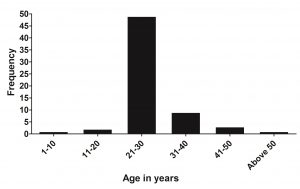 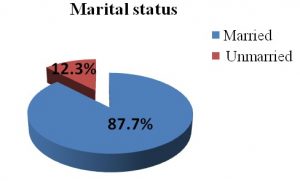 FIG. 2: MARITAL STATUS OF PATIENTS. OUT OF 65 PATIENTS DIAGNOSED WITH UTI, 57 WERE MARRIED. 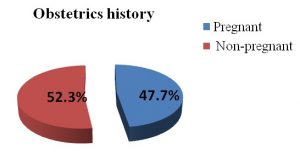 E. coli was the most common organism isolated from culture with 37 (56.7%) cases, followed by S. aureus with 18 (27.7%), and accordingly, Enterococcus (7.7%), Acinetobacter spp (3.1%), Klebsiella (1.5%), Pseudomonas (1.5%) and Citrobacter spp. (1.5%). (Table 1) E.coli being the most common uropathogen to cause UTI has been supported by various studies 20-22. In a study done in Nepal, among 237 isolates, the least common organism responsible for UTI in the in-patients was S. aureus 14. This clearly indicates that the causative agents in the community acquired UTI and hospital acquired UTI are different. 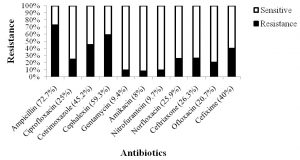 FIG. 4: ANTIBIOTICS RESISTANCE PATTERN OF E. COLI. AMONG THE VARIOUS ANTIBIOTICS THAT WERE USED TO TEST THE SENSITIVITY, E. COLI WAS FOUND TO BE MOST RESISTANT TO AMPICILLIN, FOLLOWED BY CEPHALEXIN, COTRIMOXAZOLE AND CEFIXIME. 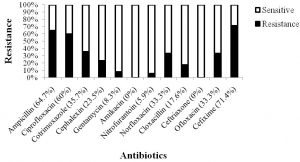 FIG. 5: ANTIBIOTICS RESISTANCE PATTERN FOR S. AUREUS. AMONG THE VARIOUS ANTIBIOTICS THAT WERE USED TO TEST THE SENSITIVITY, S. AUREUS WAS FOUND TO BE MOST RESISTANT TO CEFIXIME, FOLLOWED BY AMPICILLIN, CIPROFLOXACIN, AND COTRIMOXAZOLE.

However, in one of the studies done in Nepal, most of the urinary isolates showed hundred percent resistance to ampicillin, and a high degree of resistance to nalidixic acid, nitrofurantoin and cotrimoxazole, followed by ciprofloxacin and gentamicin. More than 50% of common pathogens were resistant to ceftriaxone. Uropathogens were more sensitive to cephotaxim, amikacin, ofloxacin and norfloxacin 14. The highest resistance in case of cefixime may be due to increase in its use for other infectious conditions. A study in the department of microbiology on all of the bacterial strains isolated from the urine samples of patients who attended the Chitwan Medical College (CMC) with a suspected case of urinary tract infection between May 2009 and October 2009 had found that E.coli was 100% resistant for  ampicillin, 55.82% for cotrimoxazole,  and 49 % for ciprofloxacin14. Among the antibiotics used, nitrofurantoin was found to be the most prescribed drug, followed by ofloxacin, in both empirical as well as definitive therapy (Table 2 and 3).

Out of the 65 cases, empirical antibiotics were used in 17 cases and in the other 48 cases, definitive therapy was used. In one case of empirical use of ofloxacin, E. coli isolate was found resistant, and hence after the sensitivity report the antibiotic was switched off and nitrofurantoin was used. In one case, though the sensitivity test for levofloxacin was not performed, it was found to be used for definitive therapy.

In one case of empirical use of ofloxacin, E. coli isolate was found resistant, and hence after the sensitivity report the antibiotic was switched off and nitrofurantoin was used. The number of patients receiving antibiotics after sensitivity test results was thus 49 instead of 48.

CONCLUSION: E. coli and S. aureus are the most common microorganisms causing UTI. Drug resistance with amikacin, gentamycin, and nitrofurantoin was found to be comparatively lower than with other antibiotics which were subjected to sensitivity test. Antibiotics were used both as empirical and definitive therapy. Nitrofurantoin was found to be the most prescribed drug in both the cases. Routine monitoring of microbial resistance helps in proper selection of antimicrobials. In addition, the result may guide the prophylactic and empirical use of antimicrobials in urinary tract infections.

ACKNOWLEDGEMENTS: The authors would like to thank Mr. Biki Gupta, Mr. Bishnu Prasad Bhattarai, Mr. Bidur Neupane, Mr. Mahesh Raj Nepal, Mr. Shiva Pandeya, Mr. Baikuntha Rajbhandari, and Dr. Balmukunda Regmi for their valuable suggestions during this study. We also acknowledge all the patients who agreed to participate in the study.

CONFLICT OF INTEREST: The authors declare no conflict of interests.