ABSTRACT: Antibiotics inhibit bacterial cell wall synthesis, protein synthesis or nucleic acid replication. The antibiotic must have access to and bind to its bacterial target site. Whether antibiotic resistance is intrinsic or acquired, the genetic determinants of resistance encode specific biochemical resistance mechanism that may include enzymatic inactivation of the drug, alteration to the structure of the antibiotic target site and changes that prevent access of an adequate concentration of the antimicrobial agents to the active site. Klebsiella organisms are often resistant to multiple antibiotics. Current evidence implicates plasmids as the primary source of the resistance genes. The susceptibility pattern of different antibiotics to ESBL producing Escherichia coli and Klebsiella spp. isolated from urine samples and they found that most of the infection caused by E. coli (61.29%) found to be most common bacteria in urinary tract infection followed by Klebsiella spp. (45.16%). Isolates were highly resistance to gentamicin followed by tetracycline, ampicillin, and amikacin. gentamicin showed resistance against E. coli and Klebsiella spp were 89.47% and 85.71% respectively. While tetracyclin and ampicillin showed 80% and 78% resistance to E. coli and Klebsiella spp. The isolates were highly susceptible and least susceptible to ciprofloxacin and norfloxacin against E. coli and Klebsiella spp. These antibiotics are considered as appropriate antimicrobials for empirical treatment of urinary tract infections. Most of the ESBL A producing isolates were multidrug-resistant. During present study, when urine sample inoculated on selective media like EMB, CLED, MSA, PIA and CIA, the growth of isolates on the medium were obtained as E. coli, Klebsiella pneumonia, S. aureus, and Pseudomonas aeruginosa.

Antimicrobial susceptibility pattern and ESBL prevalence in Klebsiella pneumoniae from urinary tract infections. The study included 92 Klebsiella pneumoniae, isolated from the urine of patients suffering from UTIs. Antibiotic susceptibility testing and ESBL detection were carried out according to Clinical and Laboratory Standards Institute (CLSI) criteria. Eighteen antibiotics were tested in this study. A total of 54 (58.7%) isolates were found to be ESBL producers 2. The detection of ESBL producing E. coli isolated from clinical samples.

Collection of Microorganism: The urine sample is collected from the pathological laboratory Nagpur.

Isolation and Identification of Bacteria:

Formation of a red or pink colored ring at the top is taken as positive. Example: Escherichia coli: positive; Klebsiella pneumoniae: negative.

The pH of the medium is tested by the addition of 5 drops of MR reagent. Development of red color is taken as positive. MR negative organism produces a yellow color. Example: Escherichia coli: positive; Klebsiella pneumoniae: negative.

The negative tubes must be held for one hour since maximum color development occurs within one hour after addition of reagents. Examples: Escherichia coli: negative; Klebsiella pneumoniae: positive.

Procedure: Bacterial colonies are picked up from a straight wire and inoculated into the slope of Simmon’s citrate agar and incubated overnight at 37 ºC. If the organism has examples: Escherichia coli: negative; Klebsiella pneumoniae: positive.

Triple Sugar Iron Test: The peptone mixture and the Beef and Yeast extracts provide the nutrients essential for growth. Sodium chloride maintains the osmotic balance of the medium. The Bacteriological agar is the solidifying agent.

Antibiotic Susceptibility Test: Once a culture is established, there are two possible ways to get an antibiogram:

The size of this zone depends on how effective the antibiotic is at stopping the growth of the bacterium. A stronger antibiotic will create a larger zone because a lower concentration of the antibiotic is enough to stop growth. The bacteria in question are swabbed uniformly across a culture plate. A filter-paper disk, impregnated with the compound to be tested, is then placed on the surface of the agar. The compound diffuses from the filter paper into the agar. The concentration of the compound will be highest next to the disk and will decrease as distance from the disk increases. If the compound is effective against bacteria at a certain concentration, no colonies will grow where the concentration in the agar is greater than or equal to the effective concentration. This is the zone of inhibition. These along with the rate of antibiotic diffusion are used to estimate the bacteria's sensitivity to that particular antibiotic. In general, larger zones correlate with smaller minimum inhibitory concentration (MIC) of antibiotics for that bacterium. Inhibition produced by the test is compared with that produced by known concentration of a reference compound. This information can be used to choose appropriate antibiotics to combat a particular infection 4-8.

Procedure: All aspects of the Kirby-Bauer procedure are standardized to ensure consistent and accurate results. Because of this, a laboratory must adhere to these standards. The media used in Kirby-Bauer testing must be Mueller-Hinton agar at only 4 mm deep, poured into either 100 mm or 150 mm Petri dishes. The pH level of the agar must be between 7.2 and 7.4. A close-up looks at the results of an agar diffusion test. Inoculation is made with a broth culture diluted to match a 0.5 McFarland turbidity standard, which is roughly equivalent to 150 million cells per ml 9-13.

E–Strip Method: The E - test principle was developed to standardize the disc diffusion method and to improve its reproducibility and reliability for clinical susceptibility predictions. The inhibition zone sizes from disc test results were compared to Minimum Inhibitory Concentration (MIC) values based on the reference agar dilution procedure.

The correlation between zone sizes and MIC values was then assessed using regression analysis and regression lines were used for extrapolating zone interpretive limits that corresponded to the MIC breakpoint values that defined susceptible, intermediate and resistant categorical results 17-28.

Characterization of Isolates: The clinical isolates were characterized on the basis of microscopic and biochemical test various test performed were shown in tables.

Microscopic and Biochemical Characterization of Clinical Isolates: Total no. of samples (n) = 8.

On the basis of the above results, it can be said that the clinical isolates were found to be Escherichia coli, Klebsiella pneumonia, S. aureus, and Pseudomonas aeruginosa.

On the basis of above result, it can be said that, the clinical isolates were found to be Klebsiella pneumonia, S. aureus and Pseudomonas aeruginosa.

On the basis of above result, it can be said that the clinical isolate was found to be Escherichia coli.

On the basis of above result, it can be said that the clinical isolates were found to be S. aureus and Pseudomonas aeruginosa.

On the basis of the above results, it can be said that the clinical isolates were found to be Escherichia coli, Klebsiella pneumonia, S. aureus, and Pseudomonas aeruginosa.

On the basis of the above results, it can be said that the clinical isolates were found to be Pseudomonas aeruginosa.

On the basis of the above results, it can be said that the clinical isolates were found to be S. aureus.

On the basis of the above results, it can be said that the clinical isolates were found to be Escherichia coli and Klebsiella pneumonia. 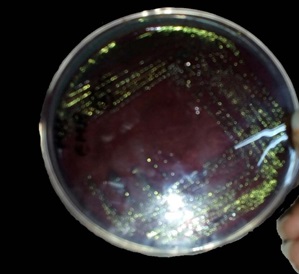 FIG. 2: GROWTH OF ISOLATES ON EMB 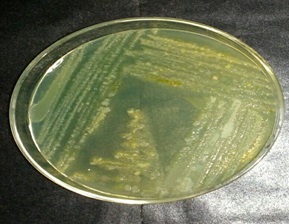 FIG. 3: GROWTH OF ISOLATES ON CLED 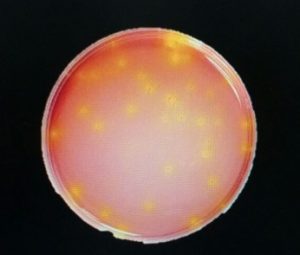 FIG. 4: GROWTH OF ISOLATES ON MSA 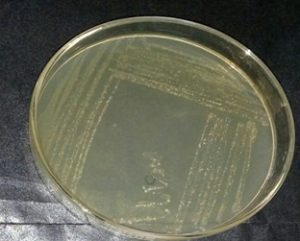 FIG. 5: GROWTH OF ISOLATES ON PIA 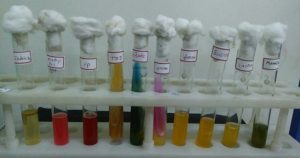 FIG. 6: RESULTS OF SUGAR FERMENTATION AND IMVIC FOR E. COLI 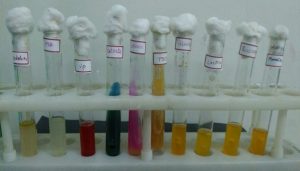 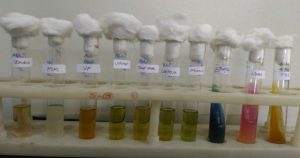 DISCUSSION AND CONCLUSION: During the study, the urine sample was inoculated on selective media like EMB, CLED, MSA, PIA, CIA medium followed with biochemical tests. The results showed the isolation of E. coli, K. pneumoniae, S. aureus, and Pseudomonas aeruginosa.

The results of antibiotic susceptibility showed that norfloxacin, gentamycin, rifamycin, lomeflo-xacine and tobramycin, penicillin, clindamycin, methicillin, streptomycin, tetracycline, amoxi-cilline, ciprofloxacin and erythromycin are resistant to E. coli while amikacin, moxifloxacin, ofloxacin and cotrimoxazole are found to be sensitive against the same. It was observed that norfloxacin, oflo-xacin, and teicoplanin are the sensitive antibiotics for klebsiella while gentamycin, tobramycine, moxifloxacin, tetracycline, lomefloxacin-cine, and tobramycine are resistant antibiotics. Ampicillin shows intermediate state and methicillin, linozoids, penicillin, amoxicillin, erythromycin showed resistance against Klebsiella. Norfloxacine, amikacin, ofloxacin, vancomycin, erythromycin, ampicillin and rifamycin are sensitive antibiotics. Gentamycin, moxifloxacin, lomefloxacin, levo-floxacin, penicillin, clinda-mycine, methicillin, streptomycin, tetracycline were found resistant against Staphylococcus aureus while amikacin, gentamycin, ciprofloxacin and tobramycin were found to be sensitive antibiotics against the same. Tetracycline, rifamycin, lome-floxacine, erythr-omycin, cefepime, streptomycin, penicillin, clindamycin were found to be resistant against P. aeruginosa. Antibiotics like norfloxacin, meropenem, and methicillin were found to be intermediate antibiotics.

ESBL producing organisms, being commonest nosocomial pathogens, and thus it is much essential to detect and treat them as early as possible The study thus suggests that the present study will provide the basis for routine screening of antibiotics against ESBL producing bacteria.

The study will provide the basis for optimizing the different lines of antibiotics against specific bacterial cultures. Thus, the results will help in exploring the specific treatment against such pathogens borne infections.

ACKNOWLEDGEMENT: The authors acknow-ledge the research staff and colleagues of R&D project on the concerned topic.