ABSTRACT: Salmonella typhi, causative agent of typhoid fever, a predominantly human communicable disease, is endemic in Africa and Asia. S. typhi is of clinical importance partly due to its mode of infection and partly due to the fact that human activities such as poor hygienic conditions are essential in the transmission and perpetuation of the pathogen. More so antibiotic resistant strains of S. typhi have emerged, increasing cost of treatment, morbidity and mortality. Meanwhile, S. typhi isolation and sensitivity testing to antibiotics are rarely practiced in the hospitals in and around Kumasi. This study sought to determine the extent of antibiotic susceptibility of S. typhi isolated from patients in Kumasi south, North Suntreso and Tafo hospitals in the Ashanti region of Ghana. The isolates were identified using morphological and biochemical means. The isolates were then tested for their sensitivity to some reference antibiotics using the Kirby-Bauer disc diffusion method. One hundred and twenty-eight (128) S. typhi were isolated from 900 clinical samples. A total of 52.3% of the S. typhi isolates exhibited resistance to ampicillin whereas 32.8, 25.0, 17.2 and 14.9% of the isolates were resistant to co-trimoxazole, chloramphenicol, ciprofloxacin and ceftriaxone respectively. About 19.5% of the S. typhi isolates were multidrug resistant. The S. typhi isolates were most sensitive to ciprofloxacin and ceftriaxone whilst majority of the S. typhi tested were resistant to ampicillin. Ampicillin is therefore no longer suitable for the treatment of S. typhi infections in these hospitals.

INTRODUCTION:Typhoid fever caused by S. typhi, though curable, tends to be chronic due to the nature of its pathogenesis and its symptomatic similarity with malaria 1. Although typhoid fever is a rare disease in developed countries 2, poor safe water supply, environmental sanitation and food hygiene in developing countries make typhoid fever a major problem 3.

In Ghana it is estimated that typhoid fever cases account for 3.2% of all infections recorded in the hospitals 4, as against an annual global estimate of 2.1 million episodes with 216, 000 deaths 5.

In developing countries, great reliance is placed on antibiotic chemotherapy in the treatment of typhoid fever because of the difficulties in preventing typhoid fever by public health measures. The mortality rate of untreated typhoid can be as high as 30%, whereas with appropriate antibiotic chemotherapy it is less than 1% 6. Attempts to control diseases caused by S. typhi through the use of antibiotics have resulted in increased prevalence of resistant strains of this organism 7.

As a result of some these problems enumerated, there is very little information on the antimicrobial susceptibility patterns of S. typhi in Ghana. This has led to the situation whereby Ghanaian prescribers usually administer broad spectrum antibiotics to treat suspected typhoid fever without diagnostic evidence of antimicrobial susceptibility. This study sought to isolate S. typhi from patients in three hospitals (Kumasi South, North Suntreso and Tafo hospitals) in the Ashanti region of Ghana and to determine their susceptibility patterns to antibiotics commonly used to treat typhoid fever in these hospitals.

MATERIALS AND METHODS: The protocols for the study were approved by the ethics committees of the various hospitals. The samples were collected from Kumasi south, Tafo and Suntreso hospitals in Kumasi, Ghana. A total of 900 urine, stool and blood samples were collected between December, 2009 and August, 2010. All the samples were inoculated into 10ml cooked meat broth media and coded appropriately. These were then transported to the microbiology laboratory of the Department of Pharmaceutics, Kwame Nkrumah University of Science and Technology and incubated at 37oC for 72 hours. All the culture media, antibiotic discs and reagents for this study were purchased from Oxoid, Basingstoke, United Kingdom unless otherwise stated.

Isolation of S. typhi: Using a calibrated platinum loop, 2µl of each culture was streaked on the surface of blood agar plates, labelled and incubated for 24 hours. The colonies that were greyish, transparent or opaque on blood agar were carefully picked using a sterile inoculating wire and streaked on Bismuth sulphite agar plates. The plates were then incubated at 37oC for 24 hours. Black colonies surrounded by a metallic sheen were picked and streaked on MacConkey agar plates. The MacConkey agar plates were also incubated at 37oC for 24 hours. Colourless colonies on the MacConkey agar plates were fished out and using a straightened inoculating wire, the butt of already prepared Triple Sugar Iron agar was stabbed and the slant streaked. After incubating for 24 hours at 37oC, the inoculated test tubes were observed for characteristic reactions of S. typhi which included a red slant, yellow butt, a small amount of blackening of the agar and absence of gas bubbles 11.

A Suspension of the isolated S. typhi was prepared by inoculating colonies into 10ml peptone water and incubated at 37oC for 24 hours. The suspension was then diluted to 0.5 MacFarland turbidity standards. A sterile swab was dipped into the standardized inoculum and used to inoculate the entire surfaces of already prepared Mueller-Hinton agar (Oxoid Basingstoke, UK). The agar plates were left to stand for 15 minutes to allow the surface moisture to dry.

Antibiotic discs were applied to the surfaces of the inoculated agar plates using a disc dispenser (Oxoid 6-place, 90mm) and incubated for 18 hours at 37oC. The diameter of zones of inhibition for each antibiotic was measured (in millimetres) and compared with values provided by the Clinical and Laboratory Standards Institute 13. Escherichia coli (ATCC 25922) served as a control in testing the sensitivity of S. typhi.

RESULTS AND DISCUSSION:A total of 128 isolates of S. typhi was obtained from the various (900) samples collected. S. typhi isolates were obtained from 49 (16.3%) of the 300 urine samples and 79 (26.3%) of the 300 stool samples (Table 1). No S. typhi was isolated from the blood samples collected. The presence of S. typhi in urine and stool samples and the absence of the bacterium in blood samples depicted a carrier state among the patients 14. According to Gonzalez-Escobedo et al, 15 carriers may shed S. typhi either through their stool or urine continuously or intermittently and the carrier state is usually the source of contamination. Carriers could therefore serve as reservoirs for the dissemination of S. typhi, causing serious public health problems. The high stool yield of S. typhi observed in this study as illustrated in Table 1 confirms an earlier report by Gonzalez-Escobedo et al 15 that carriers of S. typhi mainly shed the organism through their faeces more than urine.

Gordon and colleagues 16 asserted that counts of S. typhi in blood of patients with typhoid fever mostly indicate a median concentration of one bacterium per millilitre during the first and second weeks of the illness. Thus, S. typhi is most frequently isolated during this time. The failure to isolate the bacterium from blood samples during this study could be attributed to late reporting of typhoid fever cases to health facilities for treatment.

TABLE 1: DISTRIBUTION OF S. TYPHI AMONG MALES AND FEMALES IN RELATION TO SPECIMEN TYPES

Chloramphenicol is a broad spectrum but toxic antibiotic and only used in life-threatening situations when no other antibiotic is effective 20. Therefore, the reduced susceptibility (58.6%) of the S. typhi isolates to chloramphenicol recorded in this study could be as a result of noncompliance with prescription regulations.

In many developing countries including Ghana, people have access to this antibiotic without any prescription, which may lead to improper use 21. As shown in Figure 1, intermediate resistant strains of S. typhi were found to have emerged against all the five antibiotics namely, ciprofloxacin (6.3%), co-trimoxazole (6.3%), ceftriaxone (14.8%), ampicillin (12.5%) and chloramphenicol (16.4%). This trend shows an increasing minimum inhibitory concentration (MIC) of these antibiotics against these strains 17 and higher doses of the antibiotics may therefore be needed in the treatment of typhoid fever caused by these intermediate resistant strains. Intermediate resistance occurs when patients fail to complete the recommended dose of prescription and so the bacteria are exposed to concentrations of the antibiotic that are lower than the minimum inhibitory concentration 22. The exposure of the bacteria to the antibiotic may lead to gradual development of resistance. 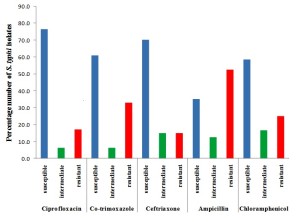 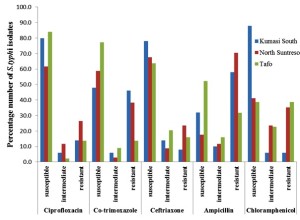 The cumulative effect arising from antibiotic misuse is the proliferation of extrachromosomal resistant genes in the environment and may be potential mechanisms for the level of multiple-drug resistance as noticed in this study. Some other factors identified in literature as the drivers of bacterial resistance to antibiotics such as unnecessary prescriptions and substandard antibiotics could also be the cause of the S. typhi resistance observed against the antibiotics in this study 17, 18. The usefulness of these antibiotics will therefore depend on the effective interventions put in place by health authorities to curb the spread of resistance among bacterial strains to antibiotics 7.

CONCLUSION: The study demonstrates that many patients visiting Kumasi South, North Suntreso and Tafo hospitals are chronic carriers of S. typhi. The S. typhi isolates were most sensitive to ciprofloxacin and ceftriaxone whilst majority of the S. typhi tested were resistant to ampicillin. Ampicillin is therefore no longer suitable for the treatment of S. typhi infections in these hospitals. These susceptibility patterns exhibited by the S. typhi isolates to the antibiotics tested indicate that the efficacy of the relatively cheap empirical therapy for S. typhi infections could be jeopardized.

ACKNOWLEDGEMENTS: We will like to acknowledge the medical laboratory technicians of Kumasi South, North Suntreso and Tafo hospitals for their assistance in this study.