ABSTRACT: Background: Chronic suppurative otitis media (CSOM) is defined as a persistent infection of the middle ear cleft with a perforated tympanic membrane and draining exudate for more than 6weeks. Information about the organism responsible for COSM and their antibiotic susceptibility is important for effective treatment. Material and Methods: A prospective cross-sectional study was conducted on 85 patients; the middle ear discharge sample was collected under strict aseptic conditions and antibiotic susceptibility done as per Clinical Laboratory Standards Institute guidelines. Result: 85 ear swabs were collected, and 89 bacterial isolates were identified, of which 72.94% sample with mono-microbial growth, 16.47% with polymicrobial growth, 9.41% show no growth, and the rest 1.17% was a contaminant. Among 89 isolates, 39.33% were Gram-positive, while 60.67% were Gram-negative bacteria. The most common isolates were Pseudomonas species 40.45% followed by methicillin sensitive staphylococcus aureus (MSSA) 38.20% and others 21.35%. Pseudomonas species showed 100% susceptible to colistin, linezolid, imipenem, amikacin (97%); ciprofloxacin (92%); gentamicin (95%); Ceftriaxone (83%); meropenem (93%); Netilmicin (98%) and Sulfamethoxazole and Trimethoprim(SXT) (90%). Proteusspecies was 100% susceptible to amikacin, ciprofloxacin, Imipenem, meropenem, netilmicin; ampicillin (71%); amoxicillin–clavulanic acid (85%); ceftriaxone (85%); gentamicin (85%) and SX (85%).Among Gram-positive bacteria, MSSA was 100 % susceptible to meropenem and Imipenem, amikacin (97%); gentamicin (81%); amoxicillin-clavulanic acid (91%); linezolid (92%); Netilmicin (94%); Vancomycin (91%); Colistin (97%) and SXT (41%). Conclusion: Pseudomonas and MSSA were the principal bacterial isolate responsible for causing CSOM.

INTRODUCTION: Chronic suppurative otitis media (CSOM) is defined as a persistent infection of the middle ear with a perforated tympanic membrane and draining exudate for more than 6 weeks 1, 2.

Thirty-one million people developed CSOM across the globe every year and with prevalence of disease is as much as three times higher in developing countries than western developed world around the world. The World Health Organization (WHO) has categorized CSOM as neglected tropical diseases and is more common in low socio-economical status 3.

CSOM usually occurs due to poor and inadequate management of acute otitis media. The etiology and antimicrobial resistance patterns of CSOM infection are different in different geographical areas, and the population studied. CSOM is predominantly caused by Pseudomonas aeruginosa, Escherichia coli, S. aureus, Streptococcus pyo-genes, Proteus mirabilis, Klebsiella species among aerobic bacteria. However, Bacteroides, Pepto streptococcus, Propionibacterium are common anaerobic bacteria 4, 5. In India, studies were conducted at various parts of the country to establish common pathogen and antibiotic susceptibility. Some studies concluded as Pseudomonas species other shows Staphylococcus species 6, 7 as the most common aerobic bacterial isolate involved in CSOM 8, 9, 10, 11. Some show polymicrobial pathogens. Anaerobic pathogens like Peptostreptococcus species, Bacteroides species and Peptococcus species involved in 10-11% cases of CSOM 9. The most common fungal agent to be Aspergillus species, which was nearly 83% of all fungal causes of CSOM and the second most common cause was Candida species 12.

Study Design and Setting: A cross-sectional study was conducted at the ENT department of the secondary care hospital in North India. A total of 85 patients with unilateral or bilateral active chronic otitis media were studied. The study participants were enrolled consecutively using a convenience sampling technique. All study participants had perforated tympanic membranes with active purulent discharge. The detailed information regarding age, sex, duration of discharge, and the antibiotic is taken prior to pus collection was collected from each study participant using a structured questionnaire in the ENT clinic. Whereas ear discharge of less than 6 weeks duration, otitis externa, and patient taking topical/systemic antibiotic within 7 days before pus collection were excluded.

Sample Collection: Middle ear discharge sample was collected at ENT clinic under strict aseptic conditions using single-use sterile cotton-tipped culture swabs, after proper cleaning the external auditory canal using povidone-iodine and spirit swab for each ear to prevent contaminants. The swabs were transported to the microbiology laboratory in the department of pathology of the same hospital for culture and antibiotic susceptibility testing.

Data Analysis and Interpretation: Data were entered and analyzed using SPSS version 20 software. Results were presented through graphs and tables. The statistical significance of association was measured by using the Chi-square test. A p-value < 0.05 was considered as statistically significant.

DISCUSSION: CSOM is defined as chronic otorrhea of more than 6 weeks duration through a perforated tympanic membrane. CSOM is a disease of multiple etiologies and is well known for persistence and recurrence in spite of treatment. The disease has irreversible sequelae and leads to serious intra and extracranial complications due to the proximity of various important structures viz. facial nerve, auditory labyrinth, lateral sinus, and middle and posterior fossa dura. CSOM is mainly classified as attico-antral (squamous COM) and tubo-tympanic (mucosal) type. According to the world health organization (WHO) the prevalence of CSOM in Asian countries is about 4% which is much more than the developed western world 4. The indiscriminate use of antimicrobials in Asian countries lead to multiple drugs resistance among the infective organisms leading to treatment challenges. There are no gender predilections though most surveys were done on children, CSOM can affect both the children as well the adults, as presented in this study. Many researchers had addressed the issue of finding the common isolates and their sensitivity pattern among the antimicrobials in line with developing the treatment protocols in different regions of the world. 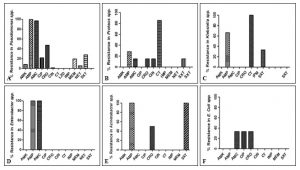 In our study, the most common isolate was Pseudomonas species, and it was similar to other studies, where also Pseudomonas species predominantly found in 48-98% of patients 15, 16, 17. Imipenem was 100% sensitive to all gram-negative isolates, consistent with the study of Rahim et al. 18 Amikacin was 100% sensitive in gram-negative isolates except 8.33% of Pseudomonas spp. and 2.94% samples of MSSA shows resistance to amikacin; this study is also at par of observation done by Maji et al., SXT was most effective antibiotic against MRSA as shown by Park et al.,19 in contrary to our study shows 100% resistance of MRSA spp. for SXT though it was not statistically significant.

In general, our result has demonstrated that amikacin, ciprofloxacin, gentamicin, colistin, linezolid, imipenem and ceftriaxone are very sensitive to gram-negative organism. Among Gram-positive bacteria meropenem, Imipenem, amikacin, gentamicin, amoxicillin-clavulanic acid, linezolid, Netilmicin, Vancomycin, and Colistin are had bactericidal effects in the majority.

The small sample size of this study may restrict the value of our finding, the frequently used antimicrobials in CSOM like penicillin developed high levels of resistance among the organisms like Pseudomonas and MSSA leading to treatment failures.

CONCLUSION: CSOM still one of the most common causes of hearing impairment in India and the patients attending the ENT clinics have most frequent complaints of ear discharge with hard of hearing shows the morbidity among the population due to CSOM. Pseudomonas species and MSSA were the principal bacterial isolate responsible for causing CSOM in this study through the most common organism was Pseudomonas species. The effective treatment, as per the cultural sensitivity of CSOM, can reduce the morbidity considerably.

ACKNOWLEDGEMENT: We would like to thank the study participants and the department of microbiology for conducting the study.