ABSTRACT: Cancer is a major health problem; almost thought - out the world. Herbal medicines have a vital role in the prevention and treatment of cancer. The present study, the in vitro anticancer activity of Calophyllum inophyllum ethanolic leaf extract was evaluated in MCF-7 Breast cancer cell lines. Anticancer activity was evaluated with MTT standard colorimetric assay against MCF-7 cells with IC50 value of 120µg/mL. The biologically active metabolites were identified and quantified by a GC-MS method shows presence of 11 different bioactive compounds. The cytotoxic effect was found to be concentration dependent. Increased concentration of the leaf extract showed increased cytotoxicity

INTRODUCTION: Cancer is a major public health burden in both developing and developed countries. As estimated there would be 10.9 million new cases, 6.7 million deaths and 24.6 million persons living with cancer around the world in 2012 1-3. Natural products like medicinal plants have been used for the treatment of various diseases for thousands of years.

Calophyllum inophyllum L. (Clusiaceae) commonly known “Punnaga” in Sanskrit, is a tree that can grow 8-20 meter tall with a broad spreading crown of irregular branches which exudes white latex when bruised. The leaves have opposite arrangements, and are petiolate, thick and shiny with numerous parallel secondary veins.

The flower is 25 mm wide and occurs in racemose or paniculate inflorescences consisting of 4 - 15 flowers 4.

Kashman and Patil reported that (+) - calanolide A and inophyllum B isolated from Calophyllum lanigerum Miq. and Calophyllum inophyllum L. showed strong activity against Human Immuno Deficiency virus type 1 [HIV-1] 7. Tamanu oil demonstrates anti-inflammatory activity. This activity is due partly to the 4-phenyl coumarin calophylloide 8-9 and to a group of xanthones in the oil, including dehydrocycloguanandin, calophyllin-B, and euxanthone. Al the xanthones in tamanu oil show anti-inflammatory activity10. Even though, the mechanism of action is not yet completely known in treatment of various infections, it may assume that the active ingredients could be play role in mode of action. The present study aimed to evaluate the possible cytotoxic activity of the ethanolic leaf extract of Calophyllum inophyllum L using MCF-7 human breast cancer cell line.

The leaves of Calophyllum inophyllum L. were collected during month of September, from Rajiv Gandhi Salai (OMR), in Chennai, Tamilnadu, India. The plant material was identified and authenticated by Department of Botany, Ramakrishna Mission Vivekananda College, Chennai, India. Herbarium of the plant was prepared and preserved in the Department.

The fresh leaves were collected and washed with running tap water, chopped into small pieces and shade dried for 10 days and grounded into powder. About 50 gm of powdered leaves were extracted with 300ml of ethanol in Soxhlet apparatus for 6 hours. Dry ethanolic extracts were obtained after removing the solvent by evaporation and stored in vials at 4°C until further analysis 11.

The phytochemical investigation of methanolic leaf extract was performed on a GC Calrus 500 Perkin Elmer System comprising an AOC- 20 I auto sampler. Gas chromatography interfaced to a Mass spectrometer (GC-MS) instrument employing with column Elite-1 fused silica capillary column 30 X 0.25mm x 1μmdf composed of 100% Dimethyl poly silloxane, operating in electron impact mode at 70eV; helium (99.999%) was used as carrier gas at a constant flow of 1 ml per minute with injection volume of 0.2μl was employed (split ratio of 10:1) injector temperature maintained at 250°C, with ion-source temperature 280°C. The oven temperature was programmed from 110° C (Isothermal for 2 min) with an increase of 10°C per-minute to 200°C, then with 5°C increase per-minute upto 280°C ending with a 9min hold isothermal at 280°C. Mass spectral analysis was taken at 70eV: a scan interval of 0.5 seconds Mass scan fragments from 45 to 450 Da. Total GC running time is 36min and total MS running time is also 36min.The relative percentage amount of each component was calculated by comparing its average peak area to the total areas. The mass-detector used in this analysis was Turbo-Mass Gold-Perkin-Elmer, and the software adopted to handle mass spectra and chromatograms was a Turbo-Mass ver-5.2,chromatogram were compared again NIST database for compound identification12.

MCF-7 cell line obtained from NCCS, Pune, India (National Centre for Cell Science), was used in this study. Cells were cultured in liquid medium (RPMI 1640) supplemented 10% Fetal Bovine Serum (FBS), penicillin/streptomycin (250 U/mL), gentamycin (100µg/mL) and amphotericin B (1mg/mL) and maintained under an atmosphere of 5% CO2 and 95% air at 37oC.

The ethanolic leaf extract of Calophyllum inophyllum was tested for in vitro cytotoxicity, using MCF-7 cells by 3-(4,5- dimethylthiazol-2yl)-2, 5-diphenyltetrazolium bromide (MTT) assay 13. Cells were allowed to grow to confluence over 24 h before use. Cell viability was measured with the conventional MTT reduction assay, as described previously with slight modification. Briefly, MCF-7 cells were seeded at a density of 5×103 cells/well in 96-well plates for 24 h, in 200ul of RPMI with 10% FBS. Then culture supernatant was removed and RPMI containing various concentrations (1 – 120µg/ml) of test compound was added and incubated for 48 h. After treatment cells were incubated with MTT (10µl, 5mg/mL) at 37ºC for 4 h and then with DMSO at room temperature for 1 h. The plates were read at 570nm on a scanning multi-well spectrophotometer (Biotek, USA). Percent cell viabilities were calculated against selected concentrations.

Cell survival curves were then calculated for the fractions showing strongest cytotoxic activities and 50 percent inhibition concentration (IC50) values were calculated from the curve for each fraction. IC50 was defined as the concentration at which each cell line growth was inhibited by 50 percent. Data represented the mean values for six independent experiments.

One way-ANOVA was used to analyze statistical differences between groups under different conditions.

To identify the anti-cancerous compounds present in the ethanolic leaf extract of Calophyllum inophyllum was subjected to GC-MS analysis. The spectrum reviled the presence of eleven bioactive compounds were shown in the Table 1and Fig 1. Of the eleven compounds identified, the most prevailing compounds were n-Heptane, 1,1-bi(4,4-dimethylhexan-2,6-dione-1-yl) (51.20%), Phytol (35.45) based on the peak area. 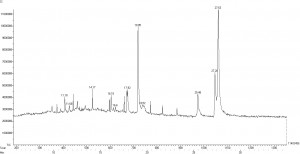 The anticancer effect of Calophyllum inophyllum on MCF-7 breast cancer cell line was evaluated through micro-culture MTT assay. The results obtained were presented in Table 2 and Fig. 2 and 3. It was observed that leaf extract showed 22.54%, 30.99%, 32.40%, 33.81%, 38.03% and 50.71% of cytotoxicity effects in 10μg/ml, 20μg/ml, 40μg/ml, 80μg/ml, 100μg/ml, 120μg/ml concentrations respectively. The median inhibitory concentration (IC50) of Calophyllum inophyllum L. leaf extract against MCF-7 breast cancer cell line was found to be 120μg/ml. However, in all cases the percentage of growth inhibition increases with the increasing concentration of the plant extract. 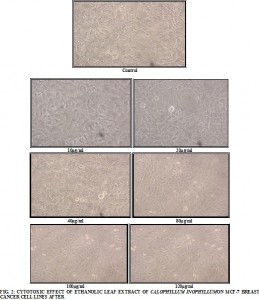 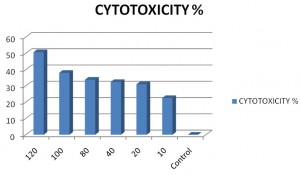 DISCUSSION: Higher plants as sources of bioactive compounds continue to play a dominant role in the maintenance of human health. Plants are rich sources in secondary metabolites with interesting biological activities 15.

The difference in plant components from previous study might arise from different extraction procedure whereas, the present study of ethanol leaf extract exhibited important bioactive compounds which posses various biological activities. Phytol is one among the nine compounds of the present study. Nanadagopalan 2015 reported the presence of Phytol in the leaves of Kirganelia reticulata aerial parts, which was found to be effective in different stages of arthritis17.

CONCLUSION: The GC-MS analysis of ethanol leaf extract of Calophyllum inophyllum revealed the presence of many important secondary metabolites having various pharmacological activities including anticancer activity. The IC50 value of ethanol leaf extract of Calophyllum inophyllum L. against MCF-7 breast cell lines showed potent anticancer activity, which are anti-proliferative, and apoptotic nature. In future studies this drug has to be characterized for clinical trials.

ACKNOWLGEMENT: The authors are thankful to The Secretary and Principal, Ramakrishna Mission Vivekananda College, Mylapore, Chennai, India for providing all facilities and we specially thank Sophisticated Analytical Instrument Facility (SAIF), Indian Institute of Technology, Chennai, India for GC-MS studies and validation of the results. The corresponding author acknowledge the financial support provided by University Grants Commission (UGC), New Delhi in the form of Minor Project Scheme.