INTRODUCTION: Natural products have long been investigated for their potential benefits. By continuous process of trails and selection, primitive man has learnt to use certain plant juice and crude extracts as antidotes for human disorder. In the 1900s most medicines were obtained from the cooking, infusion, or maceration of roots, barks, leaves, or flowers. Today natural products still have a huge importance as a source of new drugs and leads. Approximately 60% of anticancer compounds and 75% drugs for infectious diseases come from natural products or their derivatives. 1-5 Plants have contributed hugely to western medicine, through providing ingredients for drugs or having played central role in drug discovery. 6-10

In fact plant derived compounds and their semi-synthetic, as well as synthetic analogs serves as major source of pharmaceuticals for human diseases. In developing countries, the practice of medicine still relies heavily on plant and herbal extracts for the treatment of human aliments. Dietary agents consist of wide variety of biologically active compounds that are ubiquitous in plants, and many of them have been used as traditional medicine.11, 12 Some phytochemicals derived in species and herbs as well as other plants possess substantial cancer preventive properties. 13, 14 In order to develop new drugs, different plants are being selected randomly or based on ethanobotanic and ethanopharmacologic knowledge.

The extracts obtained from these plants are then evaluated using different in-vitro assays as well as their effects on normal or tumor cells. Then the potential extracts are purified in order to obtain their potential fractions or molecules to be tested by in vitro and in vivo assays again, followed by analysis of their potential for new drugs. 15

Cancer is one of the main causes of death all over the world. The world health organization estimates that 84 million people would die of cancer between 2005 to 2015.16 Cancer can be characterized by the failure in the regulation of tissue growth results in the uncontrolled multiplication of the normal cells to form tumors, which further invade into nearby parts of the body.17 The cancer can be caused by both carcinogenic factors and also by hereditary.18 More than 30% of cancers are caused by modifiable behavioral and environmental risk factors, including tobacco and alcohol use, dietary factors, insufficient regular consumption of fruit and vegetables, overweight, and obesity physical inactivity, chronic infections from Helicobacter pylori, hepatitis B virus, hepatitis c virus, and some type of human papilloma virus, environmental and occupational risks including exposure to ionizing and non-ionizing radiation.19

Conventional treatment of cancer includes interventions such as psychological support, surgery, radiotherapy, and chemotherapy.19 Currently, the most commonly use cancer chemotherapy includes many alkylating agents, antimetabolites, antitumor antibiotics, platinum analogs, and natural anticancer agents. However due to increasing rate of mortality associated with caner and adverse or toxic side effects of cancer chemotherapy and radiation therapy, discovery of new anticancer agents derived from nature, especially plants, is currently under investigation. Natural products from plants play a dominant role in the discovery of such new drugs it has been estimated that about 60% approved drugs were of natural origin.20

Mangroves are unique plant communities that grow in estuarine swamps with high salinity, high temperature, low nutrients, and high radiation. They are capable of growth in high environmental stress as they have unique properties to combat stress. Exposure to these stress situations results in the production of reactive oxygen species in these plants. In order to reduce the adverse effects of these reactive oxygen species, the mangrove plants produce various enzymes and various defense compounds including poly phenolic compounds.21-23 Hence, mangroves are biochemically unique, producing a wide array of novel natural products. Substances in mangroves have long been used in folk medicine to treat diseases.

Although the chemical constituents of most mangrove plants still have not been studied extensively, investigations have led so far to the discovery of several novel compounds with prospective medicinal value for the discovery of new chemotherapeutic agents. Untill now, more than 200 bioactive metabolites have been isolated from true mangroves of tropical and sub tropical populations.

According to their chemical structures, most of the isolated compounds are triterpinoids and traces of hydrocarbon, sterols, triterpene alcohols and high amount of carbohydrates, lipids, and proteins. India has a rich and prestigious heritage of mangrove forest and mangrove oriented medicines among the south Asian countries. Recent research evidences suggest Indian mangrove plant species have anti bacterial and anti cancer activities. The potential of mangrove plants as a source of new bio active principles is still unexplored. Further there have been no detailed in-vitro studies on anticancer properties of leaves of mangrove plants from Corangi reserve forest, East Godavari district, Andhra Pradesh, India. Hence the current study is aimed on the evaluation of anticancer activity of four selected mangrove species of Corangi reserve forest.

Plant Material: In our present study, the fresh leaves of Bruguiera Gymnorrhiza, Aegiceras corniculatum, and Lumnitizera racemosa were collected from Corangi reserve forest, Kakinada, East Godavari, and Aegialitis rotundifolia was collected from Krishna mangrove river forest, Krishna dist, Andhra Pradesh, India. The collected leaves were washed thoroughly with tap water in the laboratory to remove dust and shade dried in a well – ventilated place at room temperature. The dried leaves were ground to a coarse powder and subjected to solvent extraction.

Methanol was used as solvent to prepare the crude leaf extracts. The material was first soaked for 12 hrs in 500 ml of methanol and then subjected to extraction by refluxing for 6 to 8 hrs below the boiling point of the solvent. The extract was concentrated by evaporating at a reduced pressure using rotary evaporator. The concentrated extract was further dried at 37oC for 3 to 4 days in order to facilitate complete evaporation of the solvent.

HepG2 cell lines were purchased from the national centre for cell science (NCCS), Pune, India. The cell lines were cultured in Dulbecco Modified Eagle’s Medium (DMEM). Culture medium was supplemented with 10% fetal bovine serum, antibiotic and antimycotic solution in conditions of 5% CO2 and 95% air at 37oC.

Common basic steps that are present in in vitro cytotoxic activity include: 1) Isolation of cells, 2) Incubation of cell lines with drug for appropriate period of time, 3) Assessment of cell survival and 4) Interpretation of result. Colorimetric assay (MTT) is mainly useful in the determination of cellular proliferation, viability and activation. The need for sensitive, quantitative, reliable and automated methods led to the development of standard assays. Cell proliferation and viability assays are of particular importance for routine applications. These techniques are considered to be fast and economical for the evolution of anticancer compounds.

Cyto toxicity of sample on tumor cell was measured Micro culture tetrazolium assay (MTT assay). 24 The MTT (3-(4, 5-dimethylthiazol-2-yl)-2, 5-diphenyltetrazolium bromide) tetrazolium reduction assay was the first homogeneous cell viability assay developed for a 96 well format that was suitable for high throughput screening (HTS). The MTT substrate is prepared in physiologically balanced solution, added to cells in culture, usually at a final concentration of 0.2- 0.5 mg/ml, and incubated for appropriate period of time. The quantity of formazon is measured by recording changes in absorbance at 570nm using a plate reading spectrophotometer.

Viable cells with active metabolism convert MTT in to purple coloured formazon product with an absorption maximum near 570nm. When cells die, they lose the ability to convert MTT in to formazon, thus colour formation serves as a useful and convenient marker of only viable cells. The exact cellular mechanism of MTT reduction in to formazon is not well understood, but likely involves reaction with NADH or similar reducing molecules that transfer electrons to MTT.

Cells were seeded in to individual 96- well plates and incubated under the above conditions. After a day of incubation, cells were treated with various concentrations of the four selected mangrove plant extracts ranging from 10ug to 200ug/ml. In order to obtain IC50 values absorbance was measured at 570nm in an ELISA multiplate reader. The percentage of inhibition of growth was calculated using the formula.

Where, At = Absorbance value of test compound

RESULTS: The medicinal use of plants is probably as old as human kind itself. More than 1, 50,000 plant species have been studied and many of them contain therapeutic substances. These substances can be extracted and used in the preparation of drug or the plant itself can be used directly as a medication. In the present study, some of the mangrove plants that are used in the traditional medicine for various diseases were collected and evaluated for their cytotoxic activities. In this study, the cytotoxic activity was calculated on human tumor cell line HepG2. The cytotoxic effect of methanolic plant extracts on HepG2 cell lines were determined by using MTT assay. Metabolic activity or cytotoxic activity of sample on cells by measuring the activity of mitochondrial enzyme succinate dehydroginase was measured by Micro culture tetrazolium (MTT) assay. In this study, we used the MTT test to evaluate the cytotoxic effect of methanol plant extract on HepG2 cell line.

The methanolic extract of Bruguiera gymnorrhiza, Aegiceras corniculatum, Aegialitis rotundifolia and Lumnitzera racemosa extracts were investigated for the percentage of inhibition using different concentrations of the extract such as 10ug/ml, 25ug/ml, 50ug/ml, 100ug/ml and 200ug/ml on HepG2 cells by MTT assay. As the concentration of extracts in the culture increased, the cell viability decreased significantly as shown in graph. (Fig1to3). After 24 Hrs of extract treatment all cells exhibited significant decrease in cell viability even at lower concentration.

The cell viability assay by MTT test clearly indicated that the methanol extracts of Bruguiera gymnorrhiza, Aegiceras corniculatum, Aegialitis rotundifolia and Lumnitzera racemosa contain active principles with anti-proliferative effect against HepG2 cell lines. The results of the determination of the anti proliferative activity of the studied plants are summarized in the Table 1. The Bruguiera gymnorrhiza extract exhibited highest cytotoxic activity at 200ug/ml concentration with IC 50 value of -77.29.  This is followed by methanolic extract of Aegialitis rotundifolia with (IC50- 97.77), Lumnitzera racemosa (IC50-195.1). The methanolic extract of Aegiceras corniculatum extract was the less active among the studied plant extracts (IC50-200). 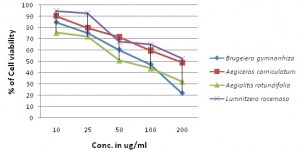 DISCUSSION: Since a long time medicinal plants maintain the health and vitality of individual and also cure and treat various human diseases including cancer without causing toxicity. There are lots of medicinal plants available in nature which has the anti cancerous properties and their natural products discovered from medicinal plants have played an important role in treatment of cancer. 25 So, considering the facts, for these plants to be discovered so that the cancer could be totally eradicated. The parts of selected mangrove plants have been commonly used in traditional medicine for the treatment of human diseases. It is believed that the extracts of these plants contains a wide variety poly phenolic compounds which might possess cancer preventive, antioxidant and therapeutic properties. The results obtained from the present study unambiguously indicate that the cell line is chemosensitive to the components of crude extracts. The cytotoxic activity of the methanolic extracts of selected mangrove plants may be due to the presence of Alkaloids, Flavonoids, Terpinoids o which its biological activity could be generally ascribed.

CONCLUSION: The in vitro data presented here suggests that the methanolic crude extracts of selected mangrove plants possess moderate anti cancer activity or reduces cellular viability at different levels. The methanolic extract of selected mangroves was tested on HepG2 cell line. This study provides an important basis for further investigation in to the isolation, characterization and mechanism of cytotoxic compounds from some of the screened mangrove plants. Thus, these plants could be used as a source for new lead structures in drug design to combat cancer.

ACKNOWLEDGEMENT: The Authors are thankful to the Pondicherry centre for biological sciences, Pondicherry for providing necessary laboratory facilities and cooperation for this present research work.