ABSTRACT: Objective: To know the occurrence, onset and severity of infusion reactions associated with anticancer drug in an oncology hospital. Methods: For the patients who developed infusion reactions, causative drug, cycle of therapy, onset and duration of reaction, associated symptoms were recorded. The adverse drug reaction reporting form (yellow form) was used to report the infusion reaction. On the basis of reported and notified reaction, the severity of reactions was determined in accordance with NCI toxicity criteria, further assessed and evaluated for its causality and severity by using Naranjo’s causality assessment scale, Hartwig’s severity assessment scale. Results: During the study period 24 (0.18%) patients developed an infusion reaction to the anticancer therapeutic agents. Of these reactions, 33.32 % occurred during infusion of taxanes and monoclonal antibodies (MABs), 24.99% occurred during the use of platinum agents. In 54% patients, the infusion reactions occurred within the first hr of the infusion, 14 patients (58.33 %) developed a reaction in the first cycle of treatment. 79.16% ADRs were found to be possible, 12.5% reactions were definite and near about 8.33% were probable. Majority of the infusion reactions were grade 2 (50%) and grade 3 (46%). Rechallenge was generally discouraged in patients who have a severe initial reaction (grade 3 or 4). Conclusion: Although infusion reactions are rare, the incidence of mild to moderate reactions against taxanes and monoclonal antibodies is quite high. Clinical symptoms do not vary widely among the agents, though the onset time of symptoms does vary. Reactions against taxanes and monoclonal antibodies during the first exposure and in the following minutes suggest the activation of different mechanisms.

INTRODUCTION: Reactions related to infusions can occur from almost all of the systemic agents used to treat cancer 1. Infusion reactions always involve the immune system; however, some (often called anaphylactic) are allergic in nature and typically are mediated by immunoglobulin E (IgE), whereas others (anaphy-lactoid) are not true allergic reactions and are not mediated by IgE 2. An infusion reaction can be defined as any unexpected reaction that is not explained by known drug toxicity 1 or Infusion reaction is a term used to describe adverse reactions that occur during or immediately after administration of a medication.

Incidence may increase when different agents are administered concomitantly 3. Incidence may increase when different agents are administered concomitantly. IRs are either allergic reactions to foreign proteins [generally immunoglobulin E (IgE)-mediated allergic responses] or non-immune-mediated reactions. Most IRs are mild with symptoms such as chills, fever, nausea, headache, skin rash, pruritus, etc. Severe reactions are less frequent and may be fatal without appropriate intervention. The National Cancer Institute’s Common Terminology Criteria for Adverse Events (CTCAE) is widely accepted throughout the oncology community as the standard classification and severity grading scale for adverse events in cancer therapy clinical trials and other clinical oncology settings. The CTCAE distinguish between infusion-related reactions and acute infusion reactions 1, 2, 3.

TABLE 1: THE SEVERITY OF INFUSION –RELATED REACTIONS CAN BE GRADED ACCORDING TO CTCAE VERSION 4.0

METHODS: Among patients who were treated in with anticancer drug at the HCG Bharath Hospital and Institute of Oncology (BHIO) between Jan 2015 and Nov 2016, those who developed infusion reactions were enrolled in the study. Present study was an observational study based on the reports collected from nurses while giving chemotherapy infusion. All patients provided informed consent before starting intravenous infusion of anticancer drug. The study was approved by the ethics committee at HCG BHIO.

The study was approved and no objection certificate was taken from medical superintendent (HCG BHIO/MS/2015-2016). For patients who developed infusion reactions, the casual drug, the dose and number of treatments received, the onset time of the reaction, blood pressure, pulse, level of oxygen saturation during the reaction, and other symptoms were recorded.

The severity of reactions was determined in accordance with NCI toxicity criteria. A reaction was considered as grade 1-2 (mild-moderate) if the patient experienced flushing, rash, fever, tremor, dyspnea, rigor, and mild hypotension. Symptoms such as severe hypotension, bronchospasm, cardiac dysfunction and anaphylaxis, requiring therapeutic intervention, were classified as severe, grade 3-4 reactions. The infusion reaction notified by the chemotherapy administered onconurse using adverse drug reaction (ADR) notification form was further assessed and evaluated for its causality and severity by using Naranjo’s causality assessment scale, Hartwig’s severity assessment scale and managed by direct observation and interview of patient from the team of clinical pharmacist, oncologist and nurses. Specially designed ADR documentation form was used for documentation and analysis of reported reactions.

Before the use of of cytotoxic drug in each patient, palonesetron plus dexamethasone, ondansetron, pheniramine maleate, dexamethasone, apprepitant, paracetamol were routinely given as premedication depending upon anticancer drug used to treat the cancer. Any patient who developed an infusion reaction was additionally given injection hydrocortisone, pheniramine maleate and in the presence of shortness of breath, an oxygen inhalation. In patients thought to have grade 1-2 reactions, the treatment drug was resumed at a lower infusion rate after the resolution of symptoms.

In patients with grade 3-4 reactions, use of the treatment drug was not resumed. Alternative drug treatments were explored in these patients. The patients who developed only single symptom and managed with single corticosteroid were excluded in the study group. 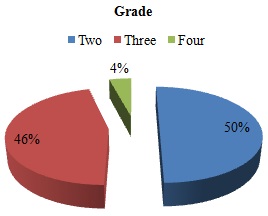 FIG. 1: SEVERITY OF INFUSION RELATED REACTIONS - GRADED ACCORDING TO CTCAE

In cancer treatment, hypersensitivity reactions may develop with the use of nearly all types of systemic agents (cytotoxics and monoclonal antibodies). With the worldwide increasing incidence of cancer, the use of these drugs has also increased significantly. In the literature, the majority of infusion reactions (95%) have been reported to be of grade 1-2, or mild to moderate 6. In our study, the percentage of mild to moderate reactions was 95.82%. 5% of the time across all agents.

Infusion-related reactions are unique and can be dangerous. Distinguishing them from true allergies is vital to the quality and safety of patient care. In 2016, the researchers documented 72 infusion-related reactions, primarily occurring with carboplatin (15%), oxaliplatin (12%), rituximab (18%), and paclitaxel (7%). which is consistent to our study. More than a dozen other agents also triggered reactions.

Reactions associated with chemotherapeutic drugs decrease the quality of life, and increases the mortality as well as the healthcare budget 7. Despite this, the impact to the patient can be quite significant, resulting in discomfort and distress, hospitalization, treatment discontinuation, and even death. Unlike most adverse reactions, which often can be predicted, infusion reactions are unexpected and variable.

Although infusion related reactions make up a small percentage of adverse drug reactions, they still carry a significant economic impact. Infusion-related reactions may lead to prolonged infusion times, dose reductions, dose delays, and/or discontinuation of the drug. They also can lead to hospitalizations and compromise optimal cancer therapy outcome 8, 9, 10. In our study, 58.33% of infusion reaction occurred during the first cycle of anticancer drug infusion. We observed 29.16% of patients treated with monoclonal antibodies and 25.0% of patients treated with paclitaxel experienced HSR during the first exposure Fig. 2. 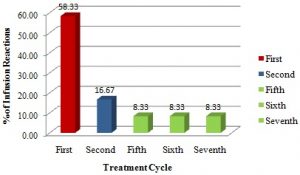 FIG. 2: INCIDENCE OF INFUSION REACTIONS BASED ON CYCLE OF CHEMOTHERAPY

In our study, most of the acute infusion reactions (54%) were occurred in less than 1 h of infusion Fig. 3. Hypersensitivity to taxanes typically occurred within 15 min of infusion but extended upto 1 h to MABs. 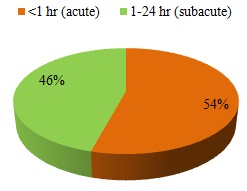 The average time to reaction for platinium has been found to be five to six cycles the average time between drug exposure and reaction has been reported as 65 min of infusion. Most of the hypersensitivity reactions associated with their use are IgE mediated and, as a result, reaction incidence increases with subsequent cycles 14, 15. The cause and timing of reactions for cisplatin have not been elucidated. Causality assessment of infusion related ADRs was done using Naranjo’s scale. 79.16% ADRs were found to be possible, 12.5% reactions were definite and near about 8.33% were probable ADRs. Re-challenge test was positive in definite ADRs. According to CTCAE, majority of the infusion reactions were grade 2 (50%) followed by grade 3 (46%) Table 5.

Management of Infusion Reactions: Hyper-sensitivity reactions are unpredictable and can occur at any time, despite preventive measures. Prompt recognition and immediate medical attention are essential to reduce the risk of severe symptoms 16. In our study, for the management of chemotherapy induced infusion reactions, symptomatic treatments were initiated for all cases immediately after the infusion reactions.

Most infusion-related reactionscases 20 (83.33%) to chemotherapy were rechallenged after symptoms resolve, 18 cases (75%) of treatments were with holded temporarily, 2 (8.33%) cases chemotherapy treatment protocol was changed, Rechallenge was generally discouraged in patients who have a severe initial reaction (grade 3 or 4) hence in 5(20.83%)  cases treatment was completely dechallenged Fig. 4. In any circumstance, the decision to rechallenge with any agent should be based on several clinical factors, including the risk for a serious recurrent reaction and the potential clinical benefit of further treatment. The decision to continue or discontinue treatment must be made on a case-by-case basis after weighing all of the relevant clinical factors. Accurate grading of hypersensitivity and infusion reactions, including distinguishing between moderate and more severe reactions, may be critical to determine the best treatment plan following resolution of symptoms 16. 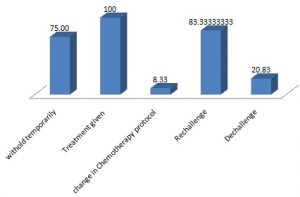 CONCLUSION: Detection of infusion reactions in hospitals provides an important measure of the burden of drug related morbidity on the healthcare system. Hypersensitivity reactions are unpredictable and can occur at any time, despite preventive measures. Prompt recognition and immediate medical attention are essential to reduce the risk of severe symptoms. Pharmacists are considered as back bone of health care system and have an important responsibility in monitoring, detecting and preventing ADRs.