ABSTRACT: Phenolics have been shown to attenuate the initiation and progression of cancer. Owing to the parasitic nature, mistleoes are a rich source of phenolics and flavonoids. European mistletoe (Viscum album) formulations provide the first line of treatment for cancer by stimulating the immune system and improve the quality of life. In fact, host-associated variation has been shown to affect the therapeutic potential of the V. album preparations. Leafless Mistletoe (Viscum angulatum), a hemiparasitic plant of the Western Ghats widely used in folk medicine, contains diverse phytochemicals having anti-inflammatory properties. However antioxidant and anticancer potential of Viscum angulatum is still not investigated. In the present study, we analyzed the contents of total phenolics (TPC), flavonoids (TFC), antioxidant potential and cytotoxic potential of extracts of leafless mistletoe plants parasitic on two different host trees, Olea dioica and Flacourtia indica. The whole plant of leafless Mistletoe was extracted in organic solvents (methanol and ethanol) and water (aqueous) using rotary evaporator. In the methanolic extract, TPC of plants parasitic on O. dioica was higher than that of F. indica, however, in ethanolic and aqueous extracts, TPC of plants parasitic on O. dioica was lower than that of F. indica. Interestingly, the pattern of antioxidant activity truly corresponds with that of TPC. In both methanolic and ethanolic extracts, the TFC of the plants parasitic on O. dioica was lower that of F. indica. The plants parasitic on O. dioica, showing high antioxidant activity also showed high cytotoxicity (LC50 - 79.33 µg/ml) on MDA-MB-231 breast cancer cells. The study provides experimental evidence on the anticancer potential of the V. angulatum plant. It also suggests the involvement of host tree in determining the therapeutic potential of V. angulatum which needs to be established further.

INTRODUCTION: Plants used in traditional folk medicine have been the source of the novel therapeutic compounds 1, 2. Most of the traditionally used medicinal plants are an excellent source of natural antioxidants having the potential for prevention and treatment of several inflammatory and degenerative diseases 3.

Phenolics have been identified as the key components responsible for the antioxidant potential of these plants. The antioxidants can reduce the oxidative stress in cells and impart protection against oxidative damage from the free radicals through various mechanisms 4, 5. In fact, approximately 50 % of the anticancer drugs that got approved in recent times (between 1981 - 2010) were either natural compounds or their semi-synthetic or synthetic derivatives 6.

Recently, there has been a growing interest in herbal medicines due to their role in disease prevention. European mistletoe (Viscum album), a hemiparasitic plant that grows on diverse host trees, has shown significant anticancer effects 7, 8. In European countries, mistletoe is extensively used in cancer therapeutics 9. Mistletoe preparations made of plants parasitizing different host trees have been shown to vary in therapeutic potential. Mistletoe is also used in the form of a herbal tea known for its potential for immuno-stimulation and cancer prevention 10. Biologically active components of mistletoe extract such as mistletoe lectins (ML) and secondary metabolites have been identified as active principle responsible for anti-inflammatory and anti-cancerous effect 11, 12.

Although there are many species of Viscum worldwide only European mistletoe, i.e., V. album has been studied for its anticancer potential. The Western Ghats in India, a hotspot of biodiversity is a home to 16 - 18 species of Viscum which may serve as an alternative source of phytomedicines for cancer therapeutics 8. Various studies have demonstrated that phytochemical profile of mistletoe might vary with the host plant as the hemiparasite depends on a host tree for its water and mineral requirement 13, 14.

Therefore, the present work aimed to determine the pharmaceutical potential of a leafless mistletoe (V. angulatum) inhabiting Western Ghats region of India. The total phenolics, flavonoids, and antioxidant potential were analyzed in the different extracts of mistletoe parasitic on two different host trees, i.e., Olea dioica and Flacourtia indica.  The present study establishes the cytotoxic potential of V. angulatum against breast cancer and also suggests the role of host variation in determining the therapeutic potential of leafless mistletoe.

Preparation of Crude Extract: V. angulatum parasitic on O. dioica and F. indica trees were collected from Western Ghats region of India and stored at -20 °C till further use. The plant samples (50 g) were crushed in the presence of liquid N2 and homogenized in 200 ml of the respective extraction solvent, i.e., ethanol, methanol and aqueous. Homogenized samples were incubated overnight in shaking condition at 4 °C. The mixture was centrifuged at 5000 rpm for one hour, and the supernatant was filtered. The filtrate was concentrated using a rotary evaporator, and the extracted phyto-chemicals were further dissolved in respective solvents.

Determination of Total Phenolic Contents: Total phenolics of different crude extracts were determined using Folin- Ciocalteu reagent (Roy et al., 2010) with slight modifications. Briefly, 8 µl of each extract solution (10 mg/ml) were separately mixed with 200 µl of Folin-Ciocalteu reagent and incubated for 5 min at RT. After that 1 ml of 15 % sodium carbonate solution was added and the mixture was allowed to stand for 30 min. The absorbance was measured at OD760 nm using a UV-visible spectrophotometer. The concentration of the total phenolics was expressed as gallic acid equivalents. Three replicates were kept for each sample and results are represented as mean ± standard deviation 15.

Determination of Flavonoids: The flavonoids content was determined using the aluminium chloride colorimetric method. Briefly, 100 µl of the methanolic, ethanolic and aqueous extract (10 mg/ml) were separately mixed with 0.1 ml of 10 % aluminium chloride. Subsequently, the reaction mixtures were diluted with 0.1 ml of 1 M potassium acetate and 2.8 ml of distilled water. The absorbance of the reaction mixture was measured at 415 nm after 30 min incubation. Blank samples for each extract were prepared from 100 µl of samples and diluted with 3 ml of respective solvent. The quercetin dissolved in the respective solvent was used as a standard. The total flavonoid content of each extract was expressed in terms of a milligram of quercetin equivalent per gram of dry weight. All the experiments were performed in replicates of three, and results are presented as mean ± standard deviation 16.

The reaction was performed in 96 well plate. A volume of 30 µl sample and 200 µl of 4 mM DPPH solution were added to each well. The 30 µl of respective extraction solvent and 200 µl of DPPH were set as blank.  The negative control was made up of 30 µl sample and 200 µl the respective solvent. The decrease in the absorbance of the resulting solution was examined at OD517 nm after 30 minutes of incubation. Ascorbic acid (10 mg/mL) was used as the positive control. The percent scavenging effect of the different extracts against DPPH radicals was calculated using the following equation:

Cell Cytotoxicity Assay: To demonstrate the anti-cancer potential of V. angulatum, the cytotoxic effect of the methanolic extract was assessed in MDA-MB-231 breast cancer cells using MTT assay in a 96-well plate.  The cells were challenged with different concentration of methanolic extract of V. angulatum. Cell lines were maintained as a subconfluent monolayer in Dulbecco’s modified Eagles’s medium with 100 units/ml penicillin and 10% fetal bovine. Cells were incubated in a humidified chamber at 37 °C with 5 % CO2. The culture was allowed to grow to confluence and the viability of the cells was checked using trypan blue (0.4 % trypan blue in PBS) exclusion method. The cells were incubated with MTT reagent (20 ml of 5 mg/ml per well) at 37 °C for 4 h. The formazan product was solubilized by the addition of 100 ml of 0.1 N HCl in isopropanol. Cell viability was estimated by recording the absorbance at 595 nm in an ELISA plate reader 18.

Statistical Analysis: The results were statistically analyzed by independent sample t-test using SPSS ver. 16.0 for Windows (SPSS Inc., Chicago, Illinois, USA) 19. The ‘p’ value < 0.05 was considered to be a significant value. The results are presented as the mean ± standard deviations.

RESULTS AND DISCUSSION: Mistletoe or Viscum sp. have been documented to treat a wide variety of diseases such as cancer, diabetes, skin diseases, high blood pressure, etc. 20, 21, 22. Various phyto-constituents of V. album and V. articulatum such as viscotoxins, phenylpropanes, flavonoids, phenols, amines, polysaccharides, ribosome inactivating proteins and lectins have been identified as the active components 23, 24, 25, 26. Mechanism of anticancer potential of V. album and V. articulatum has also been studied 8, 25. V. Album based mistletoe preparations varying in host plants are available in the market and are in use for the treatment of different cancers 27. V. angulatum is a mistletoe sp. (Fig. S1) prevalent in Western Ghat region, one of the hot spots of biodiversity. A few studies have revealed phytochemical profiling 28 and diuretic activity of this plant 29. 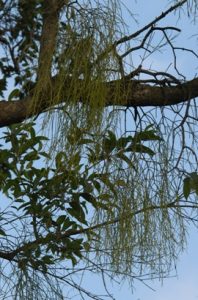 In fact a unique antioxidant protein, Van Prx has also been purified from V. angulatum 30. Despite its use in folk medicine, the pharmaceutical potential of V. angulatum is still unexplored. Therefore, in the present study, extract of V. angulatum parasitic on two different host trees, O. dioica and F. indica trees were compared in terms of their phenolic content, flavonoid content, antioxidant potential, and cytotoxicity against cancer cells. Phenolic phytochemicals are most abundant secondary metabolites and widely distributed in the plant kingdom 31. Plants phenolics and flavonoids are mostly known for their broad range of biological properties specifically the antioxidant activities 32. In this study, the total phenolics (TPC) and flavonoids (TFC) of V. angulatum parasitizing on O. dioica and F. indica trees were extracted in methanol, ethanol and distilled water. The TPC and TFC of the methanol and ethanol extract of V. angulatum were significantly higher than that of aqueous extract. TPC of methanolic extract of the plants parasitic on O. dioica was higher than that of plant parasitizing F. indica (Fig. 2A). 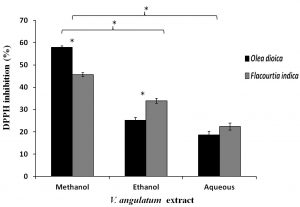 It may be noted that three phenolic glycosides have been reported from V. angulatum 28. The effect of mistletoe extract was tested on breast carcinoma (MDA-MB-231 cells) using MTT assay. Since methanol extract of V. angulatum showed significantly higher antioxidant activity in comparison to the ethanolic and aqueous extract, the cytotoxicity of methanolic extract was evaluated.  The methanolic extract of V. angulatum showed cytotoxicity within 24h of treatment indicating its high anticancer potential. In fact, the extract of V. angulatum parasitic on O. dioica which showed high antioxidant potential also showed high cytotoxicity than that of V. angulatum parasitic on F. indica. As evident in in-vitro studies, the methanol extract isolated from mistletoe hosted on O. dioica tree decreased the proliferation (LC50 - 79.33 µg/ml) of the MDA-MB-231 cancer cells in a dose-dependent manner (0.1, 1.0, 10, 50, 100 μg/ml). On the contrary, V. angulatum parasitic on F. indica exhibited no significant activity (LC50 - 500.82µg/ml) against the cancer cells (Fig. 4). Above observation suggest that antioxidant activity of V. angulatum might be responsible for its anticancer potential against breast cancer cells. 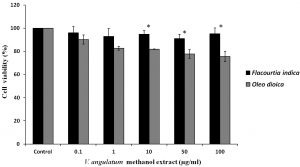 CONCLUSION: In conclusion, we report the host-associated variations in the phenolic, and flavonoid contents in the methanolic, ethanolic and aqueous extract of V. angulatum parasitic on host O. dioica and F. indica trees, which show differential antioxidant potential, and cytotoxicity against cancer cells. Despite the low phenolic and flavonoid content, the methanolic extract of plants parasitic on O. dioica exhibited strong scavenging activity against DPPH free radicals and cytotoxicity (LC50 - 79.33 µg/ml) against MDA-MB-231 cells. In contrast, the ethanolic extract of plants parasitic on F. indica showed a high phenolic content but low antioxidant activity and cytotoxicity. These results suggest the importance of antioxidant activity of V. angulatum in determining its anticancer potential. The study provides scientific evidence on the anticancer potential of the V. angulatum used in traditional medicine. It also suggests the significance of host tree in determining the therapeutic potential of V. angulatum. Further in-vitro and in-vivo studies along with isolation of active constituents are needed to get further insight into the role of the host plant in improving the efficacy of phytomedicines.

ACKNOWLEDGEMENT: VM and RSS thank University of Delhi for Faculty Research Grant and SS thanks, University Grant Commission, Government of India, for the Non-NET fellowship.