ANTICANCER POTENTIAL OF PLUMBAGO ZEYLANICA LINN. AND ITS ISOLATED CONSTITUENT PLUMBAGIN: A REVIEW

ANTICANCER POTENTIAL OF PLUMBAGO ZEYLANICA LINN. AND ITS ISOLATED CONSTITUENT PLUMBAGIN: A REVIEW

ABSTRACT: Varieties of natural products have been proved as a rich source of phytoconstituents which are reported for a wide range of therapeutic potential. Plumbago zeylanica L. Is one of the herbs which are traditionally used for its therapeutic value. It is reported for several bioactive chemical constituents like naphthoquinones, flavonoids, alkaloids, glycosides, steroids, tri-terpenoids, tannins, fixed oils, fats, proteins, etc. in its chemical composition. Plumbagin is one of the most bioactive compounds of Plumbago zeylanica L., which is reported for a wide range of pharmacological activities such as anti-cancer, anti-diabetic, anti-malarial, anti-microbial, etc. It is a naphthoquinone derived yellow crystalline phytochemical constituent which is well proven for cytotoxicity against various cancer cell lines both in-vitro and in-vivo. This study is aimed to review and highlight the anticancer potential of plumbagin, formulation development approaches, and issues in the dosage form design of Plumbago zeylanica L. and its isolated constituent plumbagin.

INTRODUCTION: Plumbago zeylanica L., commonly known as white chitraka, belongs to family Plumbaginaceae. It serves as a weed all through the tropical and subtropical nations of the world. It is an enduring sub scandent bush, develops all through India, particularly in Bengal, Uttar Pradesh, South India, and Sri Lanka 1. The family Plumbaginaceae includes 10 genera and 280 species. The genus Plumbago includes 3 species, namely Plumbago indica L. (P. rosea L.), P. capensis L., and P. zeylanica L., which are distributed in several regions of India. Various chemical constituents have been reported, which includes naphthoquinones, flavonoids, terpenoids, and steroids, etc.

It is reported for various pharmacological activities such as stimulant, digestant, expectorant, diuretic, abortifacient, and in the treatment of strong torment and rheumatic malady traditionally in Ayurveda 1. The name chitraka signifies one which renders staining to the skin when applied topically. Leaves of P. zeylanica are dark green in shading and have basic, circular with bristly edges alongside exchange situation on the stem with the separation of up to 3 inches and thickness of 1.5 inches.

Petioles are flimsy and with an estimated length of 0.5 mm, and local stipules are available. Plants produce white blooms with a distance across of 1/2 to 3/4 inch having a stalk estimating 4 to 12 crawls alongside a terminal raceme kind of the inflorescence 2, 3. The shade of the flowers is white or yellow, and roots generally appear as light yellow Fig. 1 and 2 when the plant is naturally culled out of the ground and changes to rosy dark-colored in shading when it is dried, which regularly starts as hard pieces 2, 4. 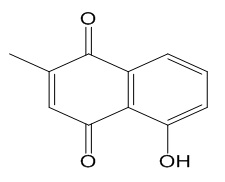 Napthoquinones present in the plant are plumbagin, chitranone, 3-biplumbvagin, chloroplumbagin, elliptone. Coumarins are seselin, 5-methoxy seselin, xanthyletin, suberosin. Other compounds present in the plant are Plumbagin acid, β sitosterol, 2, 2-dimethyl-5-hydroxy-6-acetylchromene, sapo-naretin, isoaffinetin, etc. Among all these Plumbagin, is bioactive compounds present in P. zeylanica. P. zeylanica has been reported for various pharmacological activities like anti-diabetic, memory-actuating, lipid digestion, hostile to malarial, hypersensitive and modulatory, against fruitfulness, against bacterial, hostile to viral, hostile to disease, against oxidant and larvicidal 2. The IUPAC name of the Plumbagin is 5-hydroxy-2-methyl-1,4-naphthoquinone. Plumbagin is well known for antineoplastic movement in the number of malignancy cells like breast cancer cells, lung malignant growth cells, pancreatic cells, prostate disease cells, colon malignant growth cells, and malignant ovarian growth. Plumbagin has been accounted for to dominatingly initiate apoptosis in disease cells.

Plumbagin has shown antibacterial activity against both gram-positive (e.g., Staphylococcus, Streptococcus, Pneumococcus sp.) and gram-negative (e.g., Salmonella, Neisseria) bacteria. It is also active against certain yeasts and fungi (Candida, Trichophyton, Epidermophyton, and Microsporum spp.) and protozoa (Leishmania). A wide range of medicinal properties of P. zeylanica are attributed to Plumbagin and other secondary metabolites 8-12.

Anticancer Potential: P. zeylanica reported to possess various bioactive compounds that have cytotoxic potential against various cancer cell lines. Plumbagin is one of the chemical constituent widely reported for cytotoxic potential. The plumbagin modulates cellular proliferation, radioresistance, and carcinogenesis. All these reactions are regulated by the activation of the NF-κB activation pathway. An examination additionally uncovers that plumbagin can restrain cell multiplication, square cell cycle, and incite apoptosis of APL cell line NB4 cells. Ethanolic extract of P. zeylanica is reported to inhibit malignant growth movement against Ehrlich Ascites Carcinoma, and it additionally diminishes the raised degree of lipid peroxidation having a nearness of higher terpenoids and flavonoids 2, 6, 7. Plumbagin also reported for cell apoptosis in human gastric cancer cells, and that impact might be connected with its capacity to stifle phosphorylation of STAT3 and Akt and might be a promising moiety in the treatment of gastric malignant growth 13, 14.

The literature review reported that plumbagin, a bioactive naphthoquinone obtained from three noteworthy plant families viz. Plumbaginaceae, Ebenceae and Droseraceae, possess anticancer potential in differing malignant growth cells both in-vitro and in-vivo. Plumbagin shows anti-neoplastic impacts by means of multi-channel subatomic components, including the acceptance of apoptosis and autophagy, the disturbance of the cell cycle, the hindrance of intrusion, and metastasis, and hostile to angiogenesis. Plumbagin represses the development of malignant growth cells primarily through the regulation of the sign of PI3K/Akt/mTOR, AMPK, Ras, etc. The pharmaceutical uses of plumbagin are incorporated in nano-carriers like liposomes, nanoparticles, micro-spheres, micelles, and niosomes to accomplish better remedial effectiveness in malignancy treatment 15.

Jamal et al., (2014) reported that Plumbagin (5-hydroxy- 2- methyl- 1, 4- naphthoquinone) is a naphthoquinone subsidiary from the underlying foundations of plant Plumbago zeylanica and has a place with one of the biggest and assorted gatherings of plant metabolites. The anticancer and anti-proliferative activity of plumbagin has been seen in creature models just as in cell societies. Plumbagin applies inhibitory consequences for different malignant growth flagging proteins 17.

Wei Yan et al., (2013) reported the impacts of plumbagin on the attack and relocation of human bosom disease cells. Human bosom malignant growth MDA-MB-231SArfp cells were treated with various convergences of plumbagin for 24 h. In-vitro outcomes demonstrated that plumbagin could stifle the relocation and intrusion of bosom malignant growth cells and down-manage mRNA articulations of IL-1α, TGF-β, MMP-2, and MMP-9 19.

In-vitro treatment of plumbagin showed potential activity against malignancy 21, 22. Despite this, the in-vivo organization in xenograft mouse models isn't demonstrating any symptoms in treated mice with a huge decrease in tumor development 23. The detail system study uncovered that plumbagin prompted cytotoxicity in malignancy cells through tweaking the qualities engaged with angiogenesis (counting STAT3, TGF-b, interleukin-1a, NF-kB, and VEGF), expansion, cell cycle capture (p53, p21, cyclin A, Cdk2, and cyclin D1), age of reactive oxygen species (ROS), and so forth and their downstream managed pathways 24, 25. Concentrates additionally proposed that plumbagin can be utilized in mix with the existing enemy of malignant growth sedates that would be useful in the treatment of radiotherapy and chemotherapy-safe patients 26-31.

The plumbagin was reported in terms of proliferative and invasion effects on L9981 and NL9980 cells by MTT and Boyden chamber assays, respectively. Plumbagin showed significant inhibition in both cell lines by the mechanism of IL-6/STAT3 signaling pathway 32.

In-vivo investigations proposed that plumbagin diminishes the tumor weight and volume with no symptoms in tried model creatures. Another energizing part of plumbagin is the capacity to resensitize the chemo and radioresistant malignant growth cells when utilized in the blend or alone. Nano epitome of plumbagin beats the poor water solvency and bioavailability snags, upgrading the pharmaceutical importance with better restorative adequacy 21.

Xu and Lu et al., (2010) reported the anticancer effect of plumbagin was investigated in-vivo using NB4 xenograft in NOD/SCID mice. The mitochondrial pathway engaged with plumbagin-initiated apoptosis. It was found that the age of ROS was a basic middle person dressed in plumbagin-actuated apoptosis, which would be repealed totally by cell reinforcement, NAC 13, 28.

Plumbagin has demonstrated inhibition of glioma genesis and tumor cell growth via the inactivation of FOXM1 in glioma cell xenografts mice model. Also, it has been reported as a potential down regulator of FOXM1 and could be useful in the treatment of malignant gliomas 33. Plumbagin, is also reported for inhibition of malignant growth operator and development of ovarian disease cells through the hindrance of expansion as angiogenesis 34.

Issues in Development as Dosage Form: Despite the great therapeutic interest, PBG showed low oral bioavailability (39%) due to its high lipophilicity (log P = 3.04) and poor aqueous solubility (79.3 ± 1.7 µg/ml); factors considered as major challenges for design formulations to improve therapeutic efficacy 11. Besides, a high/frequent dose is needed to achieve optimum therapeutic efficacy, which often causes severe side effects, including diarrhea, skin rashes, an increase in white blood cells, and neutrophil count 9. To overcome these problems, several pharmaceutical carriers such as liposomes, microspheres, nanoparticles, and metal complexes have been investigated 12–15. These approaches, although advantageous, seem to be complicated, expensive, and demonstrate low drug-loading (DL) capacities. They are unable to control drug release, increased hemolysis, and poor stability of plumbagin. This juncture demands a new carrier system that ensures sufficient solubility, stability, bioactivity, and biosafety of Plumbago zeylanica L. and plumbagin 38-43.

Also, a detailed investigation is needful in terms of dosage form design with a systematic formulation development approach by the design of the experiment, which gives a detailed analysis of material and process attributes.

CONCLUSION: Natural products have been well established as a rich source of nutritional as well as therapeutic potential 44. Various drugs obtained from medicinal plants/natural resources have great advantages such as fewer side effects, easy availability, and cost-effectiveness so as to make them more desirable therapeutic agents 45. Literature reveals the tremendous nutritional and therapeutic value of Plumbago zeylanica L. and plumbagin. Despite this fact, its pharmacological effects are limited because of its high lipophilicity, low bioavailability, and high toxicity. Some conventional formulations development approaches are reported for Plumbago zeylanica L. and plumbagin, but the study is limited in terms of targeted drug delivery system by systematic formulation development approach within detail characterization to improve its biopharmaceutical properties and therapeutic efficacy.

CONFLICTS OF INTEREST: Authors declared no conflicts of interest.