ABSTRACT: Alzheimer’s disease is the most common neurodegenerative disease, which initially causes oxidative stresses and leads to neuronal death. It characterized by notable memory loss, cognitive impairment, and personality disorders accompanied by diffuse structural abnormalities in the brain of the aged population. The present work focused on anticholinesterase inhibiting activity Smilax zeylanica and Smilax china against neurodegenerative disorder such as Alzheimer’s diseases on animal model respectively, as proof of preliminary anticholinesterase profile. In this paper, we studied various extracts prepared from roots of Smilax zeylanica and Smilax china for their AChE -inhibitory activity using animals. The ethanolic and various extracts from the plant roots of smilax zeylanica and smilax china were screened for their acetylcholinesterase inhibitory activity by using animals and Ellman’s method. These extracts of smilax china and smilax zeylanica exhibited inhibitory activities were observed (Cortex and Hippocampus) at a concentration of 150 mg/kg, it can be used for further study to treat the neurodegenerative disorders like Alzheimer’s disease (AD).

INTRODUCTION: Alzheimer’s disease is the most common neurodegenerative disease, which initially causes oxidative stresses and leads to neuronal death. It characterized by notable memory loss, cognitive impairment, and personality disorders accompanied by diffuse structural abnormalities in the brain of aged population 1. It affects millions of people, and it has become a major medical and social burden globally 2. During the course of the disease, the senile plaques (SPs) of amyloid-beta (A-beta) peptides and the neurofibrillary tangles (NFTs) of the tau protein develop in the specific regions of the brain, leading to the death of neuronal cells 3.

A cholinergic system in the brain, especially the basal forebrain projections to the hippocampus and cortex, is responsible for memory and learning and known to be affected in Alzheimer’s disease 4. Alzheimer’s brain has low levels of acetylcholine, which can arise from the accumulation of A-beta protein fragments, which form hard plaques that can interfere with the ability of acetylcholine to affect synaptic transmission.

Neurofibrillary tangles are primarily composed of paired helical filaments consisting of hyper-phosphorylated tau. Tau pathology typically begins in the allocortex of the medial temporal lobe (entorhinal cortex and hippocampus) before spreading to the associative isocortex. Primary sensory, motor, and visual areas tend to be relatively spared. Neuronal and synapse loss typically parallel tangle formation, and as such the clinical features and severity of AD are better correlated with NFT pathology 5, abnormally folded Aβ and tau have been shown to induce a conformational change in structurally normal peptides, these may be transferred trans-synaptically from one neuron to another 6. Hence, the present work focused on anticholinesterase inhibiting activity S. zeylanica and S. china against neurodegenerative disorders such as Alzheimer’s diseases on animal models, respectively, as proof of preliminary anticholinesterase profile. In this paper, we studied various extracts prepared from the roots of Smilax zeylanica and Smilax china for their AChE-inhibitory activity using animals.

Collection and Identification of Plant Materials: The roots of Smilax china and Smilax zeylanica were collected from Marthandam, Kanyakumari District, Tamil Nadu, India. Taxonomic identification was made from the Botanical Survey of Medical Plants Unit Siddha, Palayamkottai, Government of India (Authentication Ref no. 01/08/2016). The roots of Smilax china were dried under shade, segregated, pulverized by a mechanical grinder and passed through the no: 40 mesh sieves 7, 8.

General Chemicals and Reagents used for the Present Study and their Source: Unless stated, general chemicals and reagents were purchased from Sigma, Span, Nice, Chemsworth, Wockhardt and Sd. fine chemicals of analytical grade or equivalent.

Reagent: 0.01 M Dithiobisnitrobenzoic acid (DTNB) was prepared by dissolving 39.6 mg of 5:5-dithiobis-2-nitrobenzoic acid in 10 ml of 0.1 M phosphate buffer (pH7.0) and 15 mg of sodium bicarbonate. The reagent was made up in buffer of pH 7 and finally adjusted to pH 8, since it was more stable.

Enzyme: 20 ml of 1% gelatin was prepared and bovine erythrocyte cholinesterase was dissolved into it and diluted to a concentration of 5 units per ml by adding 1:200 with water.

Procedure: 3 ml of phosphate buffer (pH 8.0) is mixed with 20.0 μl of a substrate and 100 μl of DTNB and 50 μl of the enzyme. A blank solution was also prepared without enzyme, i.e., blank consists of the buffer, substrate, and DTNB solutions. The readings were recorded after 30 min, in order to complete the hydrolysis reaction. A standard and linear graph were prepared from the absorbances. In pH 8, there is substantial non-enzymatic hydrolysis of the substrate.

Finally, all the animals were sacrificed by giving mild ketamine and followed by cervical dislocation. The brains were isolated and collected and homogenized (about 20 mg of tissue per ml of phosphate buffer (pH 8.0, 0.1 M) in a homogenizer. 0.4 ml of aliquot homogenate was mixed with 2.6 ml of phosphate buffer (pH 8.0; 0.1 M). To that, 100 μl of DTNB reagent was added to the photocell. The absorbance was read at 412 μm, and 20 μl of substrate was also added.

Absorbance was recorded and calculated as follows:

Experimental Animals: 16-19 weeks-old adult male Wistar rats, weighing approximately 150 to 200g and 2-3months adult female albino mice, weighing approximately 20-25 were acclimatized for 7 days at temperature (25 ± 2 °C) and relative humidity (55 ± 1%) in a 12-hour light/dark cycle at room under hygienic condition 16-18. They were given access to water and fed with standard pellet diet ad libitum. The experiments were approved as per the strategy of CPCSEA, New Delhi, India, and approved by the Annamalai University IAEC (Approved number: AU/IAEC/1199/1/18).

Administration of Ethanolic Extract of Roots of Smilax zeylanica and Smilax china (EESZ & EESC): Five animals were used for each step of the study. Animals made to fast prior to dosing (food was withdrawn overnight, and water was withdrawn 3 h before drug administration) following the period of fasting. The animals were weighed, and the extract was administered in a single dose with normal saline, by oral intubation. Food was withheld for further one hour after the administration of a drug. The study obtained from the OECD-424 up and down method and the dose level selected for the study with a dose of 1.75, 5.55. 17.5. 55, 175, 550, 1750 and 2000/kg/p.o/b.wt. If the first animal survived, the second animal received a higher dose. If the first animal died or appeared moribund, the second animal received a lower dose. The time interval between drug treatment groups was concluded by the onset, period, and severity of toxic indications. Extract treatment groups at the next dosage should be postponed until one becomes certain of the survival of the formerly dosed animals. Administration of EESZ and EESZ (doses of 150 mg/kg b.wt and 150 mg/kg b.wt) 19.

Observations: Mice were carefully observed for first 3 h and up to 6 h after dosing & then periodically for 6 h, 12 h, 24 h, and 48 h daily thereafter, for a total of 14 days additional observations 63 were also made when the animals continued to display signs of toxicity observations such as a change in the skin, fur eyes and mucus membranes, respiratory system, circulatory system, autonomous system, central nervous system, somatomotor activity, and behavioral patterns were also recorded. Attention was given to observe the salivation, tremors, diarrhea, lethargy, convulsions, sleep, and coma. The presence or absence of compound-related death of the animals dosed at the first step was to determine the next step. Any mortality during the experiment for 14 days was observed and recorded. 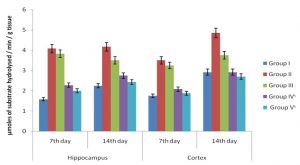 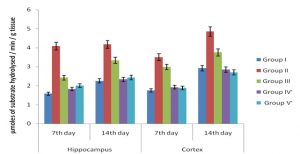 DISCUSSION: The plant species of Smilax zeylanica and Smilax china roots were collected and extracted with aqueous, chloroform, pet. ether, ethyl acetate, and ethanol. The acetylcholinesterase inhibition activity was investigated; the results obtained were shown (Table 1, 2 and Fig. 1, 2) that ethanolic extracts have anticholinesterase inhibition activity. AD is a progressive neurodegenerative disorder that initially causes memory loss and decreased cognitive behavior. This Learning and memory are controlled by the central cholinergic system. In the present study, the extracts of EESZ and EESC (150 mg/kg and 300 mg/kg of body weight) administered orally and it shows acetylcholine esterase inhibitor activity. In our study, AlCl3 treated rats were increased acetylcholine esterase activity were observed. And acetylcholine levels decreased after treatment with EESC at both doses in the brain.

CONCLUSION: The present work revealed an increase in AChE enzyme activity after treatment with AlCl3 rats. Hence, it is to adopt an increased AChE activity caused by the deposits of Al in the hippocampus and cortex. Hence, it can be used for further study of Alzheimer’s Disease.

ACKNOWLEDGEMENT: The authors that I would like to thank for the great guidance- Dr. V. K. Kalaichelvan M. Pharm, Ph. D, Associate professor; Dr. V. V. Venkatachalam M. Pharm, Ph. D, Associate professor, Annamalai University. We are also indebted to our Annamalai University for facilitating our mission. And Ms. Tamilponni. R to being a part and cared in my hard situations, friends, and my family for their love.