ABSTRACT: Herbal drugs are prescribed widely as an anti-coccidial agent even when their biologically active compounds are unknown, because of their effectiveness, lesser side effects, and relatively low cost. So, in the current study, a poly-herbal formulation was used to find out its effect as an anti-coccidial effect. In the present study, the parameters evaluated were the WBC count, Glutathione levels, malondialdehyde (MDA) levels, and the in-vitro nitric oxide radical scavenging activity. All the altered parameters significantly brought back to normal by the administration of the polyherbal formulation in comparison to the standard drug Co-trimoxazole (20 mg/kg p.o.)The histopathology of the jejunum further revealed the healing effects of the polyherbal formulation in Eimeria papillata induced coccidiosis.

INTRODUCTION: Coccidiosis may cause severe intestinal diseases. Coccidiosis is distributed worldwide in poultry and wild birds and is of major economic impact in poultry production due to mortality and morbidity. Epidemiologic studies have shown that the mortality of fowl can range from 5 to 70%. Economic losses caused by avian coccidiosis, including decreased productivity, usage of a coccidiostat, and vaccines, are estimated to amount to $3 billion annually 1. Coccidiosis in poultry is still considered as one of the main diseases affecting the performance of poultry reared under intensive production systems. Coccidiosis results in intestinal lesions, impaired growth, poor feed utilization, poor flock uniformity, and increased mortality.

Because it damages the intestinal lining, coccidiosis predisposes birds to the development of necrotic enteritis, another intestinal disease caused by the bacterium Clostridium perfringens. The most common causative agent of coccidiosis is Eimeria paillata 2. The intensive use of anticoccidial drugs has led to the development of resistance. Increasing development of drug-resistant coccidial species has stimulated searches for alternative control methods or new drugs. However, this has resulted in the increased cost of poultry products 3. Furthermore; drug or antibiotic residue in the poultry product is potentially offensive to the consumer. So, the finding of natural replacer which improves the growth with prophylactic and curative effect against coccidiosis and without health hazard to human being is worthy 4.

Animals: Four female Swiss albino mice and 24 male Swiss albino mice weighing between 25-30 g were purchased from Adita Biosys Private Limited; Plot No- SPL-26 2nd stage, KSSIDC Industrial area, Madhugiri road, Antharasanahalli, Tumakuru-572106, dated-23/10/2017, CPCSEA Reg No- 1868/PO/Bt//S/16/CPCSEA and were maintained in the animals house of PES College of Pharmacy, Bengaluru. Once procured, the animals were acclimatized for ten days under standard husbandry conditions, i.e., the animals were housed in polypropylene cages maintained under the controlled temperature at 23 ºC ± 2 ºC, relative humidity 45-55% and with 12:12h day/night cycle. Temperature and humidity were recorded daily using thermometer and hydrometer mounted in animal house. The animals had free access to standard rat pellet along with water supplied ad libitum under strict hygienic conditions. Each experimental group had a separate set of animals and care was taken to ensure that animals used for one response were not employed elsewhere. Animals were habituated to laboratory conditions for 48 h before the experimental protocol to minimize if any of non-specific stress. The Institutional Animal Ethics Committee approved the experimental protocols (IAEC approval no.- PESCP/IAEC/58/2017, Dated: 14/10/2017 (CPCSEA Reg No- 600/PO/Ere/S/02/ CPCSEA Validity- 26/5/2022) and conducted according to CPCSEA guidelines, Govt. of India.

Induction of Coccidiosis: Fecal pellets of Eimeria papillata infected chickens were collected and dissolved in distilled water. 0.1 ml of fecal pellet preparation was administered to the mice orally for 5 consecutive days for the induction of coccidiosis.

Acute Toxicity Study: The acute oral toxicity study was carried out as per the guidelines set by the organization for Economic Co-operation for development (OECD) 425 TG, three female Swiss albino mice weighing 25 to 30 g were used for acute toxicity study to determine LD50 of the polyherbal formulation 5.

Procedure: Before dosing the animals were fasted overnight before being weighed. Following the period of fasting, the fasted body weight of each animal was determined, and the dose was calculated according to the body weight. A single animal was dosed in sequence at 48 h intervals. Using the default progression factor the doses selected were 175 mg, 550 and 2000 mg/kg. Because no estimate of the substances lethality is available dosing was initiated at 175 mg/kg till 2000 mg/kg as recommended in OECD guideline 425. LD50 was calculated by observing the changes in the main test at 2000 mg/kg body weight for 14 days.

Study Design for Determination of Anti-Coccidial Activity: Male Swiss albino mice weighing 25-30 grams were used for the study. The animals were divided into 4 groups containing six mice in each. The first group was considered as non infected, normal control group which was gavaged with 100 µl of distilled water. The II, III and IV groups were orally administered with Eimeria papillata infected fecal pellets suspended in 100 µl of distilled water. The third group was administered with the standard Co-trimoxazole (20 mg/kg/p.o. + EP infected fecal pellets), and the fourth group was administered with Gastro’Immune (200 mg/kg b.w p.o.) along with infected EP pellets.

Blood Collection: Blood was collected from each rat on 24th day morning. The tail was dipped in warm water (40 ºC). Local anesthetic cream was applied on tail 30 min before the blood withdrawal. A 23G needle was inserted into the blood vessel, and blood was collected using a capillary tube or a syringe with a needle. After the blood collection, little pressure and silver nitrate ointment were applied to stop the blood flow. The collected blood was transferred to an Eppendorf's tube and was used for the estimation of blood parameters 6.

Estimation of Total Leukocyte Count: 6Blood was pippeted into the WBC pipette exactly up to the 0.5 marks. The tip of the pipette was wiped, and the blood level was maintained at the 0.5 marks by holding the pipette in a horizontal position. Then by dipping the tip of the pipette into the diluting fluid, the fluid was sucked exactly up to the 11 marks. Both ends of the pipette were closed by holding the pipette horizontally, and the contents of the bulb were gently mixed. The glass bead in the pipette should move from one side to the other. The first few drops of the fluid from the pipette were discarded as the fluid in the stem does not contain cells, and then the Neubauer’s chamber was charged with the fluid slowly and remove the excess using filter paper. The Neubauer chamber was focused under the low power (10X) objective and checked for uniform distribution of cells in the WBC squares. The total number of WBCs present in the four corner squares (W1, W2, W3, and W4) were counted under the low power objective.

Where, n is the total number of cells counted in 4 WBC squares.

Preparation of Jejuna Tissue Homogenate: The mice were sacrificed using an overdose of ketamine anesthetic (150 mg/kgbw ip). The mice jejuna were isolated from all groups and were weighed and immediately homogenized to give 50% w/v homogenate in a cold medium containing 50 mM TRIS and 300 mM Sucrose and subjected to centrifugation at 500g rpm for 10 min at 4 ºC. For estimation of the biochemical parameters, the tissue homogenate was prepared using RMS tissue homogenizer.

Procedure: GSH was measured by its reaction with Elman’s reagent to yield a yellow chromo-phore which was measured spectrophotometrically. The jejunum homogenate was mixed with an equal volume of 10% TCA (trichloroacetic acid) and was centrifuged at 4000 g rpm for 5 min at 4 ºC. The supernatant thus obtained was used for the GSH estimation. To 0.1 ml of the processed tissue sample, 2 ml of phosphate buffer. 0.5 ml of DTNB and 0.4 ml of distilled water was added to the mixture and was shaken vigorously. The absorbance was measured at 412 nm within 15 min 8.

Calculation: 9 The glutathione content was calculated by using an extension coefficient of 6.22 × 10-3M-1. The values are expressed as units /mg protein.

Principle: Principle The tissue malondialdehyde was allowed to react with TBA. The MDA-TBA adduct formed during the reaction in an acidic medium was extracted to the organic layer, and the absorbance was measured at 532 nm. 10

Procedure: Lipid-peroxidation was determined by measuring the amounts of malonaldehyde (MDA) produced, according to the method of Ohkawa et al., (1979). To 0.1 ml of jejunum homogenate 0.2 ml of 8.1% SDS, 1.5 ml 20% acetic acid and 1.5 ml 8% TBA were added. The volume of the mixture was made up to 4 ml with distilled water and then heated at 95 ºC on a water bath for 1 h. Finally, the reaction mixture was cooled under tap water followed by the addition of 5 ml of butanol: pyridine (15:1) mixture and mixed.

After centrifugation at 3000 rpm for 10 min, the upper pink organic layer was taken, and its OD was read at 532 nm and 600 nm against appropriate blank. The levels of lipid peroxides were expressed as nanomoles of MDA reactive substances per min in mg protein 11.

Principle: Nitric oxide scavenging activity can be estimated by the use of Griess IlIosvoy reaction The compound sodium nitroprusside is known to decompose in aqueous solution at physiological pH (7.2) producing NO-. Under aerobic conditions, NO- reacts with oxygen to produce stable products (nitrate and nitrite). The quantities of which can be determined using Griess reagent. Scavengers of nitric oxide compete with oxygen leading to reduced production of nitrite ions. For the experiment, sodium nitroprusside (10 mM) in phosphate buffered saline was mixed with different concentrations of the polyherbal formulation were dissolved in methanol and incubated at 30 ºC for 2 h. The same reaction mixture without the extract but the equivalent amount of ethanol served as the control. After the incubation period, 0.5 ml of Griess reagent (1% sulfanilamide, 2% H3P04 and 0.1% N-(1-naphthyl) ethylenediamine dihydrochloride) was added. The absorbance of the chromophore that formed during diazotization of the nitrite with sulfanilamide and subsequent coupling with Naphthylethylenediamine dihydro-chloride was immediately read at 550 nm 12.

Procedure: Nitric oxide radical inhibition was estimated using Griess Illosvory reaction. The reaction mixture (3 ml) containing 2 ml of 10 mM sodium nitroprusside, 0.5 ml saline phosphate buffer and 0.5 ml of standard solution or aqueous and ethanolic extracts (500-1000 μg/ml) were incubated at 25 °C for 150 min. After incubation, 0.5 ml of the reaction mixture was mixed with 1 ml sulfanilic acid reagent (0.33% in 20% glacial acetic acid) and allowed to stand for 5 min for the completion of the reaction of diazotization. After this, a further 1 ml of the naphthyl ethylenediamine dihydrochloride was added, mixed and was allowed to stand for 30 min at 25 °C. The concentration of nitrite was assayed at 546 nm and was calculated with the control absorbance of the standard nitrite solution (without extracts or standards, but the same condition should be followed). Here buffer was used as blank solution 13.

TABLE 1: SHOWING THE EFFECTS ON TLC, GSH AND MDA IN NORMAL AND TREATED MICE

The values were expressed as Mean± SEM in each group. ***P<0.0001, was considered significant. The statistical analysis was done by using Graph pad prism- Dunnet’s test comparison of a selected pair of columns with disease control. 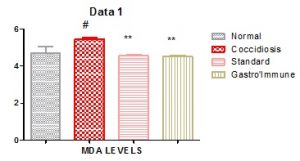 FIG. 3: EFFECT OF GASTRO’IMMUNE ON MDA

Glutathione Levels: The results of the present study indicates that there is decrease in the glutathione levels in the group II- 6.65 units/mg protein  whereas the groups treated with the standard drug and Gastro’Immune (Group-III and IV) showed values of 13.7 Units /mg protein and 14.0 Units/ mg protein  respectively .

MDA Levels: In the present study the induction of coccidiosis produced an increase in the MDA levels to 5.5 nM (Group-II) when compared to the normal group (Group-I) having MDA levels 4.35 nM. Both the Gastro ‘Immune (Group-IV) and co-trimoxazole (Group-III) were significant in bringing down the MDA levels to a normal range of 4.54 nM and 4.55 nM respectively.

The GSH level decreased, and MDA level increased in coccidial infected mice. The Gastro’Immune treated coccidiosis mice also shown a significant decrease in the total leucocyte count when compared to coccidiosis infected mice. This also confirms the role of the herbal formulation in relieving the infection related complication.

This study, using a rodent model, suggests that Gastro’Immune may be a useful herbal formulation to alleviate coccidial infected jejunum related problems. Further studies aimed at the mechanism by which Gastro’Immune exerts its protective effects are necessary before definite conclusions can be drawn. However, the data provide useful insights into the possibility of using Gastro’ Immune to the treatment of coccidial infected jejuna and GIT related disorders.