ABSTRACT: Streblus asper Lour is traditionally used for anti-diarrheal and anthelmintic activity. The present study aims to prove the antidepressant activity in a different extract of leaves of S. asper Lin animal models. The extracts of Sterblus asper L. significantly reduced the immobility time in the forced swimming test (FST), notable at 400 mg/kg when compared with the control group. The immobility time in the tail suspension test (TST) using mice markedly reduced after acute 14 days of treatment with Despiramine Hydrochloride (30 mg/kg). Administration of extracts of Streblus asper L. at dosages of 100, 200, and 400 mg/kg significantly reduced the immobility time. The extracts of Streblus asper L. (100mg/kg) shown that the same locomotion effect as the control group. However, 200 mg/kg and 400 mg/kg doses of Streblus asper L. significantly increase locomotion, rearing, and defecation. The result obtained from the forced swimming test (FST), tail suspension test (TST), and measurement of locomotor activity test (MLAT) indicate that the ethanolic extract of the leaves of S. asper L. possesses significant antidepressant activity.

INTRODUCTION: Streblus asper Lour is a small tree found in tropical countries that belongs to the Moraceae family. In different areas of Bangladesh, it is called as "Shaora." S. asper in Asian nations like as Bangladesh, India, Sri Lanka, Malaysia, the Philippines, Vietnam, Cambodia, and Thailand was traditionally utilized as a medicinal herb 1, 2. S. asper is an Indian medicinal plant, according to Indian medicinal plant data. "Mittlimara" is a kind of S. asper. It is also known as "bog-talay" and "Kalyos" in the Philippines.  This plant has been used in a variety of interesting pharmaceutical applications.

S. asper extracts have long been used to treat various diseases, including diarrhoea and dysentery. S. asper plant components are utilized for a variety of uses. The leaves have insecticidal activity against mosquito larvae, antibacterial action, and an inhibitory effect on oral and dental diseases 1, 3. The bark extract is used to relieve toothache and gingivitis; the branch is used as a toothbrush to strengthen teeth and gums, and the bark extract relieves toothache and gingivitis. The milky juice has been used as an antiseptic and astringent, while the plant roots have been utilized to treat ulcers, sinusitis and local snake bites 1, 4.

According to the literature survey, S. asper also contains bioactive elements with antibacterial, antioxidant, antihyperglycemic, anticancer, anti-inflammatory, anti-diarrheal, and anthelmintic and neuropharmacological properties 5-10. No other report regarding the antidepressant activity is reported so far, so the current study mentioned the ethanolic extract of the leaves of S. asper L. possesses significant antidepressant activity.

Preparation of Extract: The crude dried powdered drugs 50 gm were kept for maceration in 200 ml ethanol for 7 days. These drugs were re-macerated, and obtained extracts were further used for chemical evaluation. The same process has been repeated with water as a solvent.

Preliminary Phytochemical Evaluation of Extract: The extracts obtained were subjected to various qualitative tests to reveal the presence or absence of common phytopharmaceuticals like flavonoids, steroids, glycosides, alkaloids, saponins, triterpenes, tannins, and phenols.

Experimental Animal: Adult Swiss albino mice weighing 20-25g of both sexes were collected from the local animal house of Indore, Madhya Pradesh, India. The standard environmental conditions maintained for rats is temperature 25±2°C, humidity: 55-65% and 12h light/dark cycle. During the acclimatization period, food pellets provided the mice with fresh water and libitum. The animal was allowed to acclimatize to the laboratory condition for 14 days before experimental treatment. All the experimental animals treated following the Ethical Principles and Guidelines for Scientific Experiments on Animals (1995) formulated by Protocol approval reference number (PBRI/IAEC/PN-17047a).

Test solutions were administered orally using oral gavage once daily between 1-3 p.m. over a period of 14 days. All the experiments of these investigations were carried out at the pharmacology laboratory of the department of pharmacy, Indore.

Forced Swimming Test (FST): In this method, animals were exposed to a situation of forced swimming based on behavioural despair. Their movements reduced after a period of vigorous activity. However, swimming movements require keeping their heads above the water.

Experimental mice were placed in an acrylic cylinder with dimensions of 45 cm and 20cm in diameter filled with water at 25°C ± 1°C to a depth of 17cm. According to the above-mentioned apparatus, a trial session in 14 days of treatment allowed the mice to swim for 15 minutes. A mouse was considered immobile if it remained floating in the water, except for small movements to keep its head above it. The FST was performed between 1-3 p.m. and recorded using a video camera. The tape was evaluated by observers not informed about each animal's kind of treatment.

Tail Suspension Test (TST): TST is a simple, reliable, and widely accepted behavioural despair model and screening antidepressant effect. TST involves suspending the tail of the mice upside down which shows the state of agitation and immobility. This reflects a state of depression.

Measurement of Locomotors Activity Test (MLAT): A mouse is placed in an open field apparatus composed of an arena 40cm in diameter divided into 64 approximately equal areas. During open-field observations, each mouse was individually placed in the center of the arena 15th  after the last treatment.

Antidepressant Activity: The result of the antidepressant activity is given in Tables 1, 2, and 3. Interestingly, Sterblus asper L. reduced the immobility time notable at 400 mg/kg when compared with the control group in Fig. 1.

However, 200 mg/kg and 400 mg/kg doses of Streblus asper L. the significant increase in locomotion, rearing, and defecation. All the test animals were compared with the positive control, as shown in Fig. 3 ABC. 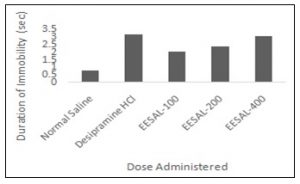 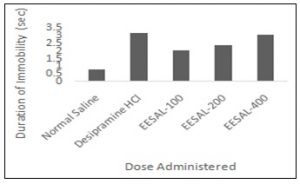 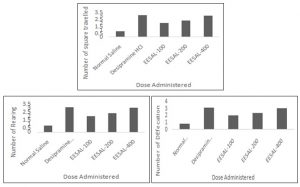 In the study, it was found that flavonoids are responsible for antidepressant activity. The findings obtained from the forced swimming test (FST), tail suspension test (TST), and measurement of locomotor activity test (MLAT) clearly indicate that the ethanolic extract of the leaves of Streblus asper L. possesses significant antidepressant-like activity. The outcome also indicates that the antidepressant-like activity was observed without the involvement of non-specific motor stimulation.

ACKNOWLEDGEMENT: Authors are thankful to the Management, Deans, HODs, and faculty members of the department of pharmacy, Bhagwant University, Ajmer, Rajasthan.

CONFLICTS OF INTEREST: Authors have no conflict of interest.