Nikita A. Pendharkar*1 and H. Padmalatha 2

INTRODUCTION:Depression and anxiety are the most frequent mental disorders1. More than 20% of the adult population suffer from these conditions at some time during their life. The World Health Organisation predicts that depression will become the second leading cause of premature death or disability worldwide by the year 20202. The present study was aimed to evaluate the antidepressant activity of Durenta repens leaves in suitable animal models. The antidepressant activity was evaluated by tail suspension method. Durenta repens Linn belonging to the family Verbenaceae is commonly known as Duranta 3 traditionally used in various diseased conditions like malarial fever, hepatoprotective, antihistaminic etc.

MATERIALS AND METHODS: The leaves of Durenta repens were collected from campus of Vijaya college of Pharmacy, Hyderabad and authentified by Dr. N. Sivaraj, Principal Scientist, National Bureau of Plant Genetic Resources Regional Station, Hyderabad and was air dried until free from moisture. Then they were subjected to size reduction to get coarse powder of desired particle size. The powdered drug was subjected to extraction with chloroform and petroleum ether in a Soxhlet extractor, temperature was maintained on an electric heating mantel with thermostat control 4.

The extracts were then concentrated to 3/4th of their original mass using rotary vapour apparatus. The concentrated extract were then transferred to a china dish and evaporated on a thermostat controlled water bath till it formed a thick paste.

The thick mass was vacuum dried in a dessicator till it is free form moisture. The extracts were administered orally as suspension by triturating with 5% Tween 80.

Acute toxicity studies: The acute toxicity studies were performed to study the acute toxic effects and to determine the minimum lethal dose of the drug extracts as per the guideline OECD 423. Swiss albino mice of either sex weighing between 25-30gm were used for the study. The pet ether and chloroform extracts of Durenta repens were administered orally to different groups of overnight fasted mice at the dose 30, 100, 300, 1000 and 2000mg/kg body weight. After the administration of the extracts, animals were observed continuously for the first 8hrs for any toxic manifestation. Thereafter observations were made at regular intervals for 24hrs. Further the animals were under investigation upto a period of one week 6.

Antidepressant activity by Tail suspension method 7: Mice were moved from the housing room to the testing area in their home cages and allowed to adapt to the new environment for at least 1 h before testing. Group I received the vehicle (1ml/100g, p.o). Group II and III were treated with Durenta repens pet-ether and chloroform extracts (200mg/kg p.o) respectively. Group IV animals served with Imipramine (10mg/kg, s.c). All groups received their respective treatments 30 min prior to the induction of depression. Immobility was induced by tail suspension test. Mice were hung individually on a paper adhesive tape, 58 cm above the table top. Tape was placed approximately 1cm from the tip of the tail. Mice were considered immobile when the hang passively and completely motionless for at least 1 min. The duration of immobility was recorded for a period of 5 min.

The data were analysed by one way ANOVA followed by Tukey multiple comparison test.

RESULTS AND DISCUSSION: The extractive values for pet ether and chloroform extract was 20% and 25% which shows the solubility of the phytoconstituents in the particular solvent used. The phytochemical studies revealed the presence of carbohydrates, alkaloids, glycosides, reducing sugar, resins, flavonoids and terpenoids and the absence of tannins, saponins and acidic compounds.

The toxicity study reveals that 200mg/kg as the therapeutic dose and upto 200mg/kg both the extracts were safe and not produced any toxicity symptoms. In the tail suspension test the chloroform extract was able to reduce the immobility time and simultaneously to enhance movements but not when the animals were suspended.

Reduction of immobility was comparable to that observed that after administration of imipramine. The decrease in immobility by imipramine was accompanied by an increase in serotonergic and selective effects on catecholamine transmission8. Then, although other kinds of studies are obviously necessary to elucidate the mechanism of action of Durenta repens. Various clinical and experimental antidepressant reports also indicate that tricyclic antidepressant drugs are useful in the treatment of acute and chronic depression conditions 9.

Blockade of DA in these models is associated with their stimulant rather than antidepressant activity10. Exact mechanisms underlying the antidepressant action cannot be concluded at the moment due to the presence of large number of phytochemicals in the extract. 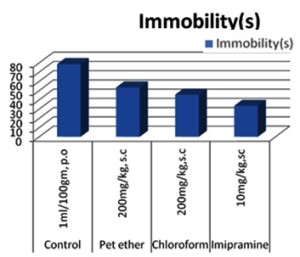 CONCLUSION: Results obtained in the study suggest that the chloroform extract of Durenta repens possessed antidepressant action. Studies are ongoing in our laboratory to ascertain the exact mechanism of antidepression of the extract to unmask its CNS profile with a view to isolate, identify, characterize and elucidate the structure of bioactive compounds responsible for observed pharmacological activities.

ACKNOWLEDGEMENT: The authors would like to thank Dr. H. Padmalatha (Principal and Professor of Gyana Jyothi College of Pharmacy, uppal, Hyderabad) for the laboratory facilities to carried out this study.