INTRODUCTION:Diabetes is one of the most prevalence chronic diseases in the world. This is a chronic incurable condition due to insulin deficiency that affects 10% of the population. The number of diabetic people is expected to rise from present estimate of 150 million to 230 million in 2025. For a long time, diabetes has been treated with several medicinal plants or their extract based on the folklore medicine.

Nowadays herbal medicines are highly recommended for the treatment of diabetes inspite of other therapeutic option, which can produce serious side effects and in addition they are not safe during pregnancy.

Therefore, the search for the more effective and safer hypoglycemic agents has continued to be an important area of active research. Furthermore, after the recommendation made by WHO on diabetes mellitus, investigation on hypoglycemic agent from medicinal plant has become more important 1-2.

Cassia fistula  Linn. also known as golden shower, Indian laburnum, belongs to the family Leguminoceae. In traditional medicine, it is used in the treatement of hematemesis, pruritis, intestinal disorders, leucoderma, diabetes, and as antipyretic, analgesic & laxative 3-4.

Plant: The bark of Cassia fistula L. were collected from the local areas of Hubli, Karnataka, and authenticated by Dr. B.D. Huddar, Head, Department of Botany, H.S.K. Science Institute, Hubli (Ref. No: SKA & H.S.K./Auth-2008-09, dated: 28/07/2008). A voucher specimen (No.07PG353, Shrikant Malpani) has been deposited in the PG Pharmacognosy laboratory of the college for future reference.

Extraction: 200 g of shade dried and powdered stem bark was extracted with 95% ethanol at temperature 40-600C, in a Soxhlet extractor. The solution was evaporated giving a dark brownish residue (27.39%) stored in dessicator.

20 g of total alcoholic extract was dissolved in water and water soluble portion was fractionated with pet ether (yield 0.076%), benzene (yield 0.076%) and ethyl acetate (yield 69.72%). The suspension of alcoholic extract and its ethyl acetate fraction were prepared by using 1% Tween in saline. The phytochemical screening of the extracts revealed the presence of tannins, flavonoids, glycosides, carbohydrates, steroids and triterpenoids 8.

Animals: Wistar albino rats (200-300 g) of both sex used for the antidiabetic activity. The rats were purchased from Sri Venkateshwara Traders, Bangalore-21. They were housed in polypropylene cages and fed with laboratory diet and water ad libitum. All the protocols were performed in accordance with Institutional Animal Ethical Committee.

Toxicity studies in mice: In house bredalbino mice of either sex weighing between 20-30gm were used during investigation. The animals were fasted over night. As per following the OECD guideline no. 420 fixed dose method procedure, the effective dose for both extract was found to be 200mg/kg body weight 9.

As expected in alloxan treated rats, there was significant increase in blood glucose, cholesterol (CHL) and triglyceride (TGL) levels. The diabetic animals showed significant decrease in blood glucose level after 14 days treatment. Moreover it also decreased the levels of cholesterol (CHL) and triglyceride (TGL) increased by alloxan treatment (Table 1, Figure 1 and 2). Alloxan treatment of the rats has showed the loss in body weight as compared to normal rats (Table 2, Figure 3).

TABLE 1: EFFECT OF TOTAL ALCOHOLIC AND ITS ETHYL ACETATE FRACTION ON BLOOD GLUCOSE LEVEL, CHOLESTEROL AND TRIGLYCERIDE LEVELS OF THE RATS 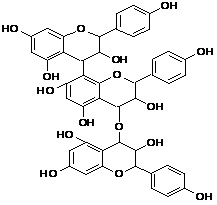 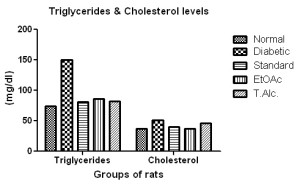 FIG. 2: EFFECT OF TOTAL ALCOHOLIC AND ITS ETHYL ACETATE FRACTION ON CHOLESTEROL AND TRIGLYCERIDE LEVELS 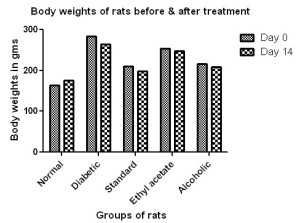 FIG. 3: EFFECT OF ALLOXAN TREATMENT ON BODY WEIGHT OF THE RATS

However, the ethyl acetate extract was more effective and results are comparable with that of reference drug, gliblenclamide. From the collective spectral data, the isolated compound-I was found similar to flavonoidal moiety (Compound-I). Hence, we can say that presence of flavonoid in the ethyl acetate fraction may be responsible for antidiabetic activity.

CONCLUSION: From the above results, it was concluded that the present study seems to support the claims by traditional medicine practitioners about the usefulness of Cassia fistula L. bark for the treatment of diabetes. From the phytochemical investigations and spectral data studies the correlation of antidiabetic activity can be made with the flavonoidal compounds.

ACKNOLEDGEMENT: The authors are thankful to the management KLE society, Belgaum & principal KLES College of pharmacy, Hubli for providing the necessary facility to carry out this study.