ABSTRACT: The study was initiated to determine the antidaibetic activity of Avicennia alba in Streptozotocin induced Type-2 diabetic rats. The rats were treated with 100, 200 and 400 mg/kg of Avicennia alba stem and leaf methanolic extract (MLAA) and compared with the diabetic, normal and standard (glibenclamide) rat groups. The blood glucose levels, glycosylated haemoglobin levels, and body weight of the rats in different groups (n=6) were monitored at 0, 7, 14 21, and 28 days. The histopathological parameters of the liver and pancreas were also analyzed at the end of the study. MLAA (100, 200, and 400 mg/kg) extract reduced the blood glucose level from the 21st day itself (193, 141, and 134 mg/dL), and the best reduction was observed by the end of the study with 121.3 and 107.3 mg/dL (200 and 400 mg/kg). The initial decrease in body weight was recovered after the drug treatment, and normalization in body weight was observed on the 4th week. The glycosylated haemoglobin was found normal in MLAA (200 and 400 mg/kg) treated diabetic rats compared to that of normal untreated rats at the end of the study. Glibenclamide was also equally effective against diabetes. The histology revealed that MLAA 400 mg/kg could protect the cellular architecture of the liver and pancreas. The result from the study confirms ethnopharmacological significance of the crude plant extract in establishing it as a potent anti-diabetic regulator.

INTRODUCTION: Diabetes mellitus is one of the most prevalent diseases in the world, with the highest number of patients in India. It is characterized by the impaired insulin secretion by the islet of Langerhans of pancreas. This increases the blood glucose level and which in turn damages tissues and organs under chronic conditions.

Traditional medicines derived mainly from plants play a major role in the management of diabetes mellitus 2. World Health Organization (WHO) has recommended the use of traditional plant treatments for diabetes as they are effective, non-toxic, with less or no side effects, and are considered to be excellent candidates for oral therapy 4.

Type 2 is associated with progressive insulin resistance and β-cell dysfunction. Deficiency of insulin secretion or action in diabetes causes prolonged hyperglycemia, which in turn leads to severe diabetic complications such as retinopathy, neuropathy, nephropathy, cardiovascular problems, liver disease, and limb amputation. Despite the fact that there are several herbal medicines are available in the market, search for much effective drug of plant origin will continue. The genus Avicennia belongs to the family Acanthaceae. The genus Avicennia comprises 22 species of mangrove trees that occur in tidal and intertidal zones of estuaries and sea beds found in tropical and temperate regions spanning throughout the world 5.

Avicennia alba is found in south and southeast Asia, the islands of the South Pacific Ocean, and Australia. It is a native of India and is distributed in coastal regions of south India, mangrove forests 8. Its widespread root system with large numbers of pneumatophores helps to stabilize new deposits of sediment and are highly tolerant to saline environment 14. It is used for the treatment of several types of diseases such as sexual disorders, scabies, rheumatism, paralysis, asthma and snake-bites, and ulcer. The resin of seeds and leaves is used in traditional medicine as a contraceptive. Various studies have reported that the extract of Avicennia alba shows a broad range of biological activities, such as anti-cancer, anti-inflammatory, anti-microbial, antidiarrhoeal, and analgesic.

Previous phytochemical studies on the plant have reported in the isolation of steroids, triterpenes, saponins, flavonoids, alkaloids, and tannins. Three naphthoquinones and their analogues such as avicequinone-A, avicequinone- B, avicequinone-C and avicenol-A, avicenol-B, avicenol-C respectively, were isolated from stem bark of Avicennia alba 1 Traditionally, more than 100 numbers of mangroves and mangrove-associated plant used for the treatment of diabetes have been reported, but only a very few numbers of plants are evaluated and reported scientifically 3. Recently, the medicinal value of mangroves and associated plants persist in providing priceless therapeutic agents, both in modern medicines and in traditional systems 7. The present study deals with the anti-diabetic activity of Avicennia alba on streptozotocin-induced Type 2 diabetic rats and their histopathology.

Collection of Plant Materials: The stem and leaves of Avicenniaalbawere collected during the month of August 2014 from korangi mangrove forests, Kakinada, Andhra Pradesh. The collected plant material was identified, and its authenticity was confirmed by Prof G. Mohana Narasimharao, Department of Botany, College of Science and Technology, Andhra University, Visakhapatnam. The herbarium voucher specimen has been allotted a reference number, i.e., 22,300, and was kept in the Department of Botany, Andhra University for further reference. Freshly collected plant material was cleaned to remove adhering dust by washing under running water and then dried under shade. The dried sample was powdered, weighing about 4kg and used for further studies.

Solvent Extraction: The air-dried, powdered stem and leaves (1 kg) was macerated using methanol (3 liters) for a period of 3 days at room temperature and was filtered using Whatmann filter paper no.1. The extract was then vacuum dried in a rotary vacuum evaporator and used for further studies 15.

Chemicals: All the chemicals used in this study were purchased from Sigma, Mumbai, India.

Acute Toxicity: Acute oral toxicity studies were performed according to the OECD (Organization for Economic Co-operation and Development) guidelines. The male albino mice weighing between 200 to 250 g were selected and divided into 12 groups each consisting of 6 animals. They were maintained under standard conditions (room temperature at 22 ± 3 ºC, 12 h light/dark) and allowed free access to water along with a standard pelleted diet for one week before the experiment. The animals were subjected for acute toxicity study using each extract at a dose of 2000 mg/kg orally in 12 groups and observed at regular intervals of 1, 2, 4, 8, 12 and 24 h for skin changes, morbidity, aggressiveness, increase oral secretion, sensitivity to the sound and pain as well as respiratory movements and mortality. The selected twelve extracts showed neither visible signs of toxicity nor mortality. The results clearly indicated non-toxicity of the Avicennia alba plant extract at a dose of 2000 mg/kg. Hence there is no LD50 of the tested extract is considered safe and nontoxic.

Induction of Non-insulin Dependent (Type 2) Diabetes Mellitus: Non-insulin-dependent diabetes mellitus (NIDDM) was induced 11 in overnight fasted male rats by a single intraperitoneal injection of 65 mg/kg STZ. Hyperglycemia was confirmed by the elevated glucose level in the blood, determined on day 1, 7th, 14th, 21st, and 28th after injection. Glibenclamide (2.5 mg/kg) was used as a standard drug.

Collection of Blood for Biochemical Parameters: Blood was collected from the retro-orbital plexus of rats 12. A fine capillary was inserted gently in the inner angle of the eye, and then the capillary was pushed under the eyeball at a 45-degree angle and over the bony socket to rupture the fragile venous capillary of the ophthalmic venous plexus. The Passage is about 10 mm.

The tip of the capillary tube should be held gently, merely resting on fingers while blood was flowing after collecting the desired volume, capillary was removed with the simultaneous release of pressure by forefingers and thumb. Any residual blood droplet around the eyeball was wiped off by dry cotton wool.

The blood samples were centrifuged (4000 rpm for 12 min) for serum separation. The serum is intended for biochemical parameters like FBS, Glycosylated Hemoglobin in a semi-auto analyzer (Evolution 3000) with the help of a commercial kit (Coral Pvt. Ltd.) at different time intervals, as showed in the graph.

Histopathology of Liver and Pancreas and Body Weight Studies: Histopathological analysis of liver and pancreas were performed by cutting 2 mm sections of the tissues using a microtome and fixing in 10% formalin and staining with haemotoxylene and eosin. 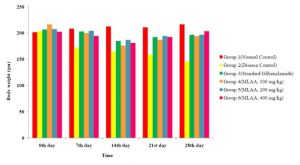 Fig. 1 shows body weight studies in the present investigation; in the disease control rats, the bodyweight is found to be decreased significantly when compared to normal control. The treatment with selected herbal extract increased body weight.

Fig. 3 and 4 show Fasting Blood glucose and Glycosylated heoglobin studies. The STZ induced diabetic rats enhanced the level of glycated haemoglobin (HbA1c) due to a rise in levels of glucose in the blood, which further react with haemoglobin and produce the glycated haemo-globin formation 10. 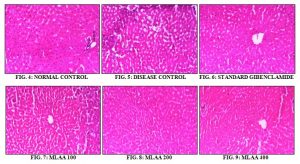 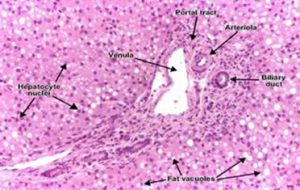 Changes in Fig. 4-9: Fat vacuoles or Steatosis represents the intracytoplasmic accumulation of triglyceride (neutral fats) in liver due to administration of STZ in rats. The accumulation of these neutral fats in liver produced non-alcoholic fatty liver disease (NAFLD) associated with fatty changes of hepatocytes, ballooning degeneration, a mixed lobular inflammation and fibrosis. The above Figure depicts the hepatic histopathology of disease control group, showed hepatocellular steatosis (Fat vacoules) due to the accumulation of lipids in the hepatic cytoplasm. Ballooning is the most relevant abnormality in NAFLD due to degenerative modification of hepatocytes in which they loses their normal polygonal shape, becoming swollen and round inconsequence to intracellular fluid accumulation due to microtubule dysfunction and impaired protein secretion 9. The hepatic stellate cells are losing their ability to synthesize collagen and tend to hepatic fibrosis. The standard and high dose of MLAA groups showed better hepatoprotective action and maintained normal architecture of liver among others in a dose-dependent manner. 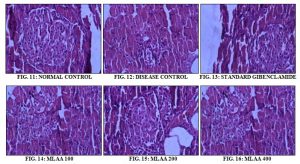 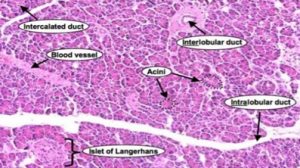 The pancreatic islet cells are three types which secrete glucagon (alpha cell), insulin (beta cell), and somatostatin (delta cell). The normal histology of the pancreas arranged in lobules with prominent nuclei. The islet cells are seen embedded within the acinar cells and surrounded by a fine capsule where as the disease control groups shows destruction and distortion of endocrine cells, enlargement of islet, presence of necrotic cells and inflammatory cell.

The histopathological results of the liver and pancreatic study also reflect the degree of protection given by the extract doses to the diabetic rats. The combinatorial effect of various phyto-constituents and bioactive compounds were considered the potential cause for the establishment of Avicennia alba plant extract as a potent andti-diabetic plant source. To my knowledge in the light of existing literature review this is the first report to establish Avicennia alba plant as antidiabetic potential. Further research is significant to separate various active biochemical compounds of the plant and to identify their molecular interactions that are vital for the assessment of their curative properties.

ACKNOWLEDGEMENT: The author would like to acknowledge Andhra University college of Pharmaceutical Sciences, Andhra University, Visakhapatnam, for providing their lab facilities and library.

CONFLICTS OF INTEREST: The author declares no conflict of interest